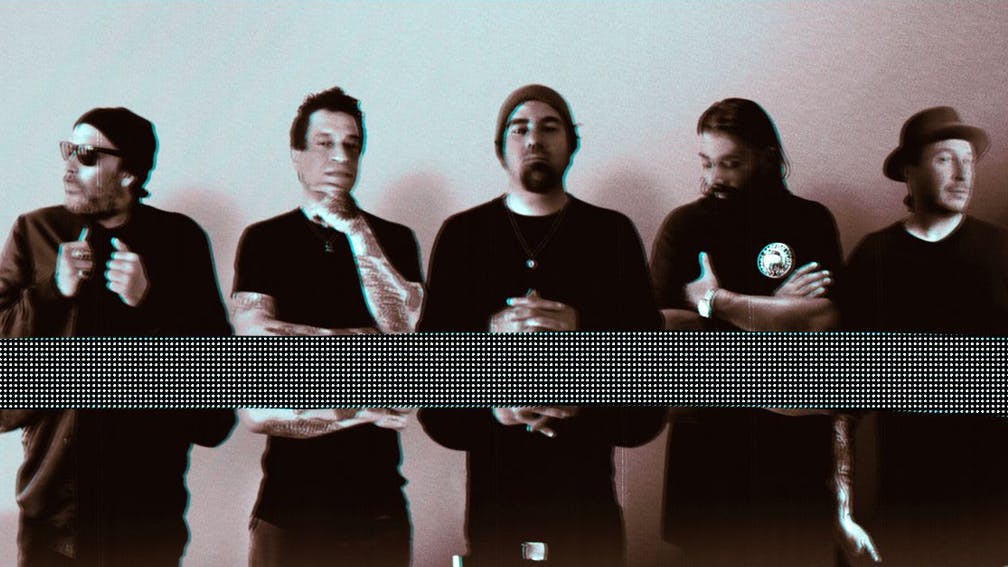 Chino Moreno and Kermit the Frog. It's quite the visual. But one that instantly leaps to mind when Deftones producer Terry Date reveals he took the band to LA's Jim Henson Studios to begin work on their awesome ninth album Ohms.

"Yeah," he says with a smile. "It's the Muppet people. The old A&M Records studio, and before that, it was Charlie Chaplin's film studio. I've done a lot of records in there. Slayer's last record I did in there."

After around a month of drums, bass and guitars, Terry took Deftones to his own Seattle studio to finish work without the restrictions of a rented room. While Ohms is Terry's first Deftones album since 2003's self-titled LP, it's his fifth with the band overall, recording their debut Adrenaline (1995), beloved breakthrough Around The Fur (1997) and critical smash White Pony (2000). He says that it's been healthy for Deftones to work with others, and they've been in touch as friends continually for 25 years.

They first met when Terry was invited by Warner Bros records, who signed Deftones to their Madonna-owned Maverick imprint in 1994, to see them rehearse in Sacramento. "That would have been about six months before the first record," he says. "They rode to rehearsal on their bicycles. They still do, actually. But when we went into the space, which was probably a 20-by-20-foot square room with basically everyone on top of each other, I was amazed at the energy. I'm surprised they didn't kill each other in there, jumping around so much. The passion is what really sold me, right off the bat."

The passion has remained undimmed, though Terry distinguishes passion from mere energy. "As you get older, the energy changes into more extreme passion," he says. And with Deftones, that passion has never changed. "[It] goes from the beginnings of the writing all the way through to the recording. And sometimes the passion boils over – which is healthy."

Since Adrenaline, Terry has been a partner on Steph Carpenter's journey as a guitarist, beginning with the standard tuning and six strings of the debut, to drop-D tunings with Around The Fur, and now eight and ludicrous nine-string guitars on Ohms. "I saw a little meme the other day saying that on the next record Steph's going to be playing a harp!" laughs Terry.

Deftones lore states that creative tension – particularly between Steph and vocalist Chino Moreno – is what allows an album like Ohms to balance abrasion with intimacy, oceanic swells with astral ambitions. Despite the impression of competition and dispute however, Deftones are both crucially committed and ultimately democratic in recording.

"There's not a lot of personal possession to each person's part," says Terry. "Obviously if they have an opinion they're going to voice it, but they understand that each person's part is a little piece of the puzzle. And that includes me – we all try to work together for what we think is going to be the best thing."

As a producer, and particularly with Deftones, Terry doesn't want his personality to appear on his records. "I want to make sure that their creativity is on display,' he says. "My stamp is the fact that hopefully I'm not seen, or that the band is seen more purely than with somebody who's more heavy-handed."

On each album, however, Deftones have pursued something new. The Spell Of Mathematics, Ohms' centrepiece, was recorded using a completely different drum kit to the rest, continuing a habit which began with Around The Fur, and RX Queen on White Pony. "They're always asking me for something I haven't done before," says Terry. "They're always trying to get me to get a sound in their head. We always seem to set up a whole different drum set for Abe [Cunningham, drums] for one song, and mic it with very few microphones. We'd go 'anti-traditional' studio recording with it."

Abe would take shooting-range earphones, hollow them out, and insert only the headphone elements that deliver the studio output as he played. This helped with White Pony and in particular Digital Bath, a song with a beat so resonant that it remains one of Terry's references today. "That song and that beat reacted to the room mics perfectly," he says. "Abe's beats are always so unique. Sometimes the beat, the room and the ambiance line up really nicely. I was happy with it."

With vocals, Terry is grateful to have worked with Chino as much as he has, and considers him a world-class lyricist.

"It's the depth of his thought," he says. "And he struggles with it. It's hard work for Chino to write these lyrics, and he works really, really hard at it. A lot of the time he writes after the music is done. We're sitting in the studio, I see him on the couch just listening, working on the perfect words to fit these songs. Quite often we'll do the lyrics early but save a lot of time for him to revise stuff, or fix a line here or there that doesn't precisely put across what he wants."

Chino is particularly sensitive to nuance, emphasis and the sound of recorded voices, working with Terry to find the right weight for the vocals. On heavier songs like White Pony's GRAMMY-award winning Elite, or Ohms' This Link Is Dead, they'll use a little distortion to create lines that travel across the songs like magnesium fire. On more delicate songs like Change (In the House of Flies) or Pompeji, it's a case of exploring spatial effects. "If we want to have a special spot in a song or a unique section, then maybe he'd sing through a telephone mic of some kind, or some weird thing that we found in a flea market someplace."

The glue, as Terry puts it, is the unsung combination of Frank Delgado's synths and Sergio Vega's bass. Frank will complement the drift of the largest cymbals, or introduce songs or link them, with added ambiance and flourishes throughout.

"When we first started, Frank would use turntables, but instead of scratching with them or doing some loop or sample, he would create these these really beautiful atmospheric sounds. It then shifted to CD-turntable things, and then eventually became keyboards. His contribution is very different from a DJ Lethal. It's the glue that brings a lot of the rough edges together. Stephen has the aggressive guitar part of the band. Chino has the beautiful melodic part. And Frank ties the two together really well."

Ohms is the first Deftones album to see Terry working directly with Sergio, following the death of founding bassist Chi Cheng in 2013. After completing Ohms, the producer has untold respect for the former Quicksand man's ability. "Sergio contributes so much to what Stephen does and what Chino does," he says. "Radiant City, that's a song he starts, shows what he contributes. I miss Chi so much but the way Sergio has come in is a huge part of this band."

Reflecting on the decades, Terry is awed by Deftones' breath of musical influence, and the hunger they have to make albums that endure.

"When we first started working together, one of the reasons that they wanted to work with me was they were huge fans Sir Mix-a-Lot and a record I did back in the early '80s. I mean, Mix-a-Lot produces all his own stuff and I was basically an engineer, but Deftones loved that record. They also loved the Soundgarden stuff. They loved the Pantera stuff. And then Chino and others are PJ Harvey fans. Chino loved The Smiths and Sade. The complete opposite of testosterone music. And because of all those influences, that brought a lot of people to the band.

"Deftones are like family to me," he says. "My kids grew up around them, have nicknames for them – I've known them most of my adult life and certainly most of their adult life. So Ohms isn't just a regular record for me. This is a mission."

Deftones' new album Ohms is out now and available to buy/stream/download here.