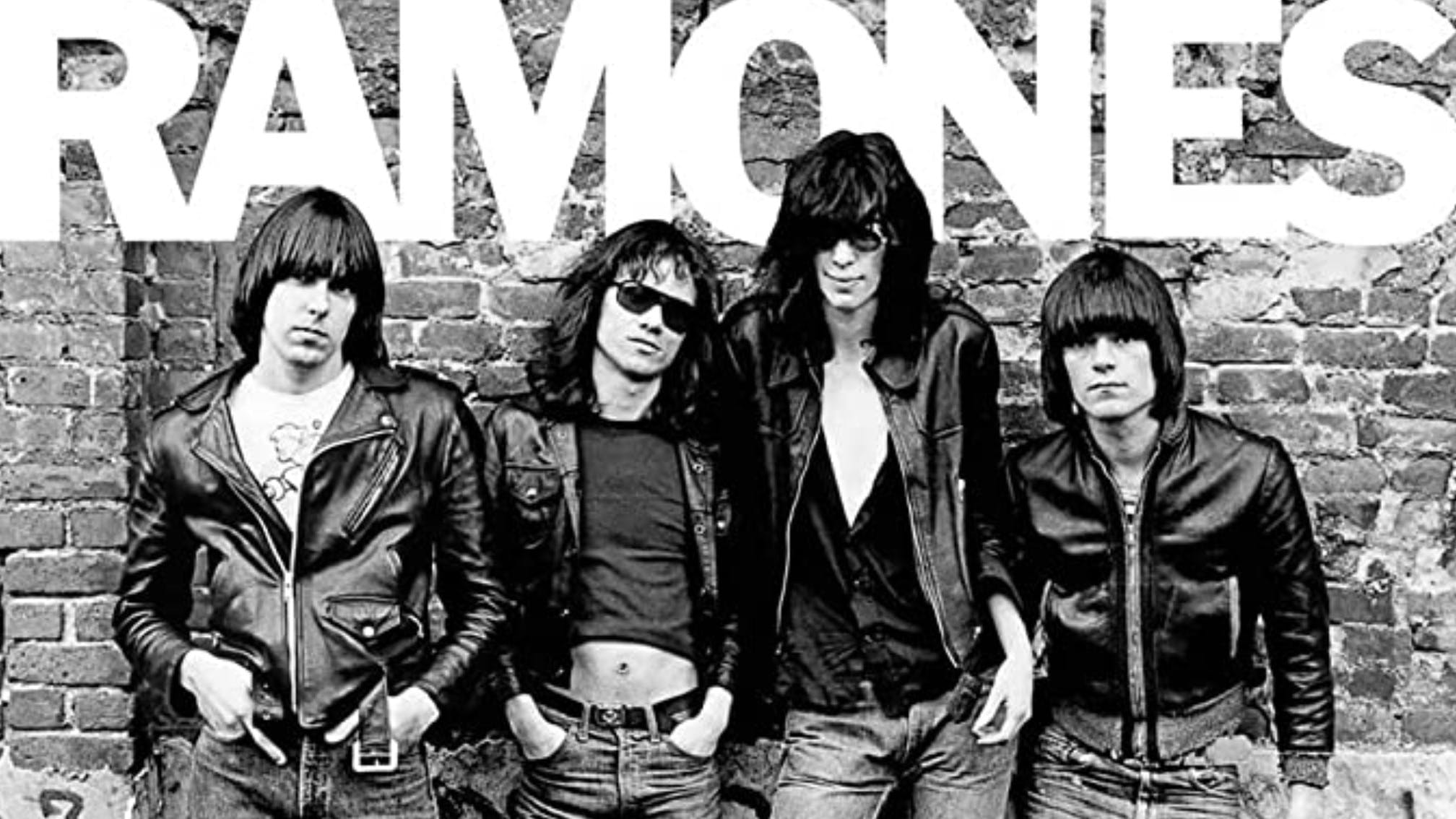 ‘Hey, ho! Let’s go!’ The simple rallying crying that kicks off Blitzkrieg Bop, the opening track on The Ramones’ self-titled debut – a record that revolutionised American rock’n’roll in the space of 14 short, sharp tracks.

Released on April 23, 1976, the album’s longest tune – the psychological creep-fest of I Don’t Wanna Go Down To The Basement – clocks in at two minutes and 39 seconds. The shortest – Judy Is A Punk, an ode to young offenders – blasts forth for a mere minute and 32 seconds. The self-explanatory Now I Wanna Sniff Some Glue (all one minute 35 seconds of it) is atypical in that it contains a rare guitar solo. This is music with no fat on the bone.

As a record, The Ramones is nothing short of a musical manifesto – a raging reaction to the soft rock, disco and musical blandola of the time. It’s a version of rock music that’s stripped down for maximum impact.

The photograph that graces the cover adds to the album’s impact, essentially crystallising the punk aesthetic on one picture. Roberta Bayley’s simple, black and white shot of Johnny, Tommy, Joey and Dee Dee Ramone standing against brick wall depicts the band as a gang – one you could quite easily join. All you needed was a leather jacket, a pair of well-worn jeans and some battered Converse sneakers.

Roberta was paid a mere $125 for the use of the shot that she’d originally taken for Punk! Magazine, and yet rarely has a picture come to represent so much. Not only does Roberta’s cover image reflect the no-frills attitude of the music it housed, it also provided a clear view of the character of each band member.

Guitar player Johnny stands slightly apart, the threat in his stare evident. Drummer Tommy perches on tiptoes on a ledge and is slightly tucked in to 6’ 6” singer Joey who, conversely, slouches to try and mask his height. Dee Dee looks hesitant and awkward – as if he has somewhere better to be – and peers out from under his bowl-cut fringe.

In fact, all four members of The Ramones – their adopted collective surname taken from an adaptation of a pseudonym used by Paul McCartney during his time in The Beatles – had clearly defined roles within the band.

Tommy was The Ramones’ conceptualist and producer, who would leave after their first three studio albums to be replaced by Marky Ramone. Johnny – strong willed and politically to the right – was the band’s de facto leader and the man who shaped their musical style through his direct use of barre chords and the downstroke. Dee Dee, meanwhile, was one of the band’s principal writers, his lyrics defined by his own experience and self-destructive personality. In contrast, Joey – the band’s other key songwriter – was sensitive and introverted, his unique, near-hiccoughing vocal style rendering The Ramones instantly recognisable.

The band’s collective power was evident onstage from their first shows in 1974 onwards, their reputation increasing as they moved out of their HQ at Performance Studios and became regulars at CBGBs and Max’s Kansas City. The New York scene of the time begat the likes of Suicide, Blondie, Talking Heads, Television and the Patti Smith Group – all different sounding bands bound by a common, restless energy. If Debbie Harry became the poster girl for that nascent punk individualism, then Joey was its unwitting gangly poster boy.

Signing to Seymour Stein’s Sire records in late ’75, the band famously cut their debut with producer Craig Leon on a paltry recording budget of $6,400. When the album hit the racks, it was met with universal praise and yet it stalled at 111 in the U.S. charts, and received little if any radio-play. In fact, genuine success would elude The Ramones throughout their career, ultimately leading to their split in 1996 as the tensions and differences that had always existed between band members finally consumed them.

It would take until April 2014 for the band’s debut album to be certified gold in the U.S. with sales of half a million copies. By then, however, the influence of The Ramones was writ large across the face of modern music, and across three generations of fans and fellow musicians.

Their most impactful performance came on Sunday, July 4, 1976 when, in the wake of their debut album, the brudders hit London’s Roundhouse for a co-headline show with San Francisco garage-rock outfit The Flaming Groovies. Existing bootlegs from that night capture the crowd raising the familiar ‘Hey, ho!’ chant prior to the band’s arrival onstage, while the audience itself reads like a ‘who’s who’ of British punk and includes members of the Sex Pistols and The Clash – two bands who would refine their own performances based on what they witnessed that very night.

Equally significant was the influence generated by The Ramones back home, where the first wave of U.S. punk had spawned a new, angrier scene that would soon morph into hardcore. Their direct approach would prove catalytic to everyone from Dead Kennedys (a shot of a long-haired Jello Biafra hanging out with Joey Ramone from ’77 is out there somewhere), Bad Brains (who named themselves after a tune from The Ramones’ fourth album, Road To Ruin) and Black Flag (who supported them at the Hollywood Palladium in November ’84).

In fact, The Ramones’ influence extends far beyond mere music. Author Stephen King, a lifelong fan, was adamant that they needed to provide the title-track to the 1989 movie adaptation of his novel, Pet Sematary. Countless tunes of theirs have made it on to further film soundtracks since then.

Stephen King would also write the sleeve notes to the 2003 album We’re A Happy Family: A Tribute To Ramones, which was produced by Johnny and Rob Zombie, and which featured contributions from artists as diverse as The Pretenders (Something To Believe In), Metallica (53rd and 3rd), Green Day (Outsider) and Tom Waits (Return Of Jackie And Judy).

In 2014, U2 paid their respects when they released The Miracle (Of Joey Ramone), a tune wherein Bono detailed the impact of hearing the band’s first album or, as he wrote, “the most beautiful sound I’d ever heard”. But arguably the ultimate tribute came from a bunch of kindred spirits in the form of Motörhead, who included the track R.A.M.O.N.E.S. on their 1991 album, 1916. “Joey Ramone was one of nature’s gentlemen,” reflected Lemmy discussing his friendship with the singer years later.

Of course, The Ramones have continued to influence countless acts down the years. They were, after all, the original pop-punk band – embracing traditional ‘60s and ‘50s pop sensibilities and translating them into the ‘70s and beyond. As such their early albums continue to provide a blueprint to anyone who hears them, their perceived simplicity suggesting that this is music you could make.

“Everybody’s just emulating us and now everybody just kinda takes our sound as their foundations,” observed Joey, reflecting on the band’s impact.

If the members always felt disappointed at their own lack of commercial success, they more than made up for it in T-shirt sales. These days, the band’s iconic logo – which subverts the U.S. Presidential seal and was designed by their artist and all-round ‘fifth member’ Arturo Vega – graces a vast range of merch that is sold everywhere from Hot Topic stores through to Walmart and Primark. But The Ramones are far more than just ‘a T-shirt band’.

At the heart of The Ramones’ legacy is the music itself: a distillation of everything that is pure about rock’n’roll coupled with proper songs, the hooks of which sink deep. Songs that include Sheena Is A Rocker, I Wanna Be Your Boyfriend, Teenage Lobotomy, Rockaway Beach, I Wanna Be Sedated, Psycho Therapy, I Believe In Miracles and The KKK Took My Baby Away – smash hits one and all in an alternative universe.

When it comes to their albums, the received wisdom is that The Ramones effectively stretched out one idea across 17 studio releases, making the same record every time. In fact, nothing could be further from the truth.

Second album Leave Home, released in January 1977, is a progression from their debut, released eight months earlier. Rocket For Russia, their third released in November ’77, was what they viewed as their own high-watermark and moves their sound on further. Album number five, 1980’s End Of The Century, is undoubtedly their most polished offering, helmed by the maniacal producer Phil Spector – who allegedly held the band hostage at gunpoint during the sessions and who insisted Johnny Ramone record the opening block chord to Rock’n’Roll High School countless times. Meanwhile, latter period long-players like Subterranean Jungle (1983), Too Tough To Die (1984) and Animal Boy (1986) are also expansive and far too often overlooked.

The acrimony engulfed their later years and the passing of all four original members – Joey in 2001, Dee Dee in 2002, Johnny in 2004 and Tommy in 2014 – has done nothing to diminish the impact of the music they made together. To those of us that saw them pretty much every year when they toured, we remember the rush of adrenaline they created onstage. They never played for more than an hour and 15 minutes but that was always enough to leave you exhausted by the sheer velocity of their performance and, being honest, they never ever let you down.

In hindsight, it is easy to take The Ramones for granted because their attitude and their approach have simply become part of the fabric of modern music. And yet, back in ’77, Joey, Johnny, Tommy and Dee Dee changed pretty much everything all while managing to re-state the importance of rock’n’roll itself. Their version was accessible to everyone and while it boasted a deliberate cartoon quality, it was paradoxically based on the genuine personalities of band members themselves. While we enjoyed the pinhead culture The Ramones created, it was the realness and the vulnerability that we identified with.

“There’s nobody as good as The Ramones, never will be,” reflected Joey prior to his death, underlining the pride and self-belief that defined the band. He was not wrong, which is why The Ramones will be here to inspire us forever.

Netflix and STXfilms announce I Slept With Joey Ramone, an upcoming biopic in which the legendary punk singer is played by Saturday Night Live comedian Pete Davidson.