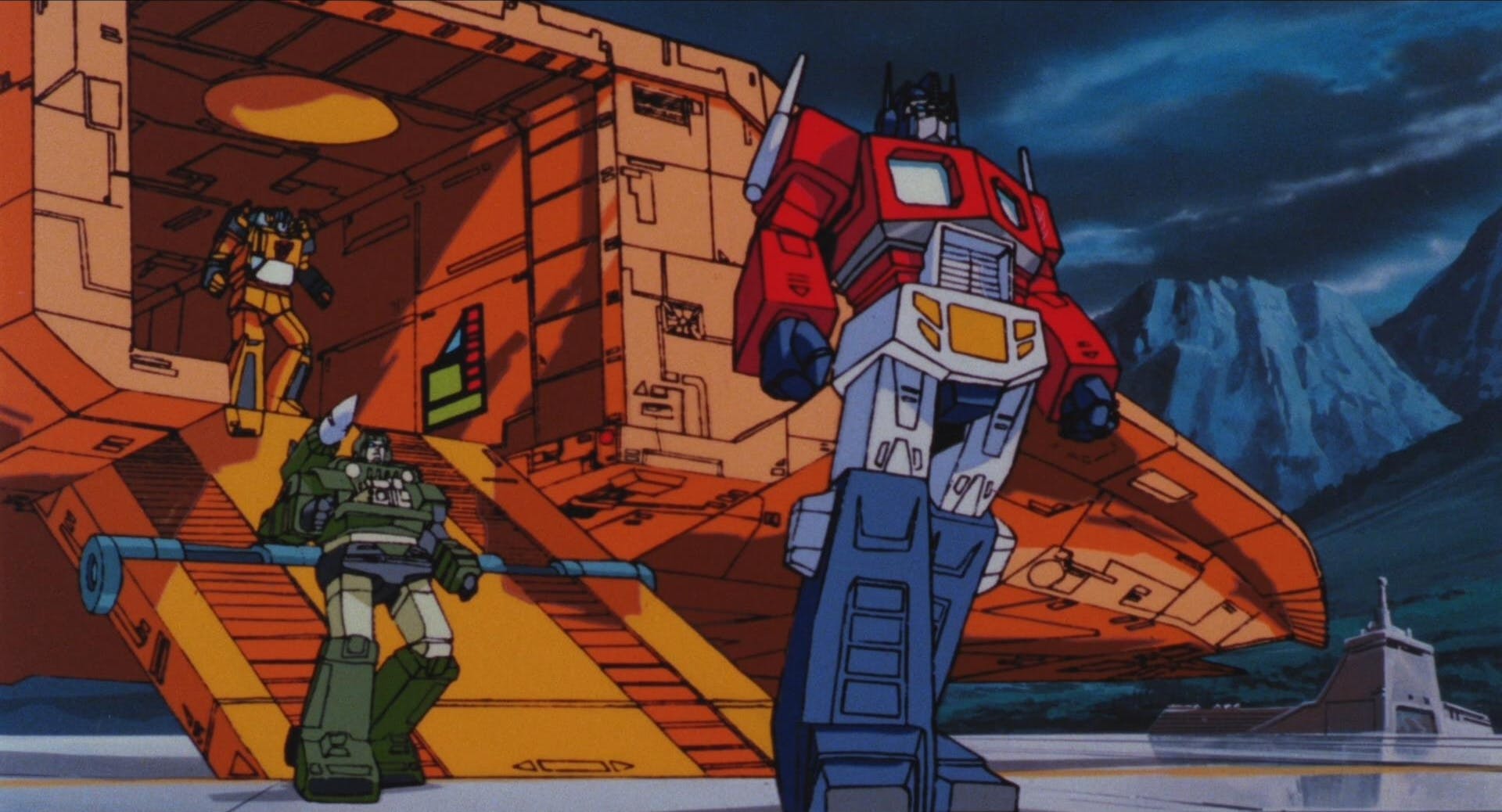 Transformers today, film-wise, is both a box-office blockbuster and a Razzies regular. The franchise – starring gigantic alien robots disguising themselves as Earth vehicles and technology – has seen the gulf between cold profits and critical praise widen remarkably since the first live-action movie of 2007 proved a palatable exercise in both old-timer nostalgia and newcomer satisfaction.

But that wasn’t the robots in disguise’s debut on the silver screen. It wasn’t just a rebooting of characters that’d been around since the early 1980s, favourites like (the good ones) Autobot leader Optimus Prime and his (the bad ones) Decepticon rival Megatron – it was also a second swing at cinematic glory for Hasbro’s evergreen toy line, consistently on shelves in one form or another since 1984.

And it was that first, animated movie proper, released in 1986 as an extension of the televised cartoon of the time, that not only taught me a thing or two about mortality (no, thanks for that, really), but also opened my ears to heavy metal long before I came across the likes of Metallica, Mötley Crüe and Guns N’ Roses.

As a primary school-aged kid in the mid-1980s, music wasn’t massively on my radar what with the competition from cartoons on television, BMX-ing, video games and action toys.

But while Transformers on television recycled the same few tunes, the movie – for which producers Sunbow and Marvel (yes, that Marvel – for a while, Transformers and Spider-Man shared a universe) pushed the budget to many times the TV norm – recruited a number of North American metal bands to complement an original, synth-heavy score from Staying Alive composer Vince DiCola. And didn’t they make an impression.

The movie begins with a sequence of epic destruction. Somewhere out in the depths of space, a colossal, planet-sized robot (by the name of Unicron, a character that quite literally resurfaced in 2017’s Transformers: The Last Knight) devours another planet, and pretty much all of its (also robotic) population. Then comes the title sequence – but not with the theme tune we’ve become accustomed to, as cool as it was. Instead, Los Angeles rockers Lion come crashing in, and these young ears were immediately electrified.

The movie’s not even three minutes old, and kids have been introduced to – and had their tiny minds blown by – the greatest villain the Transformers series will ever see, and the most kick-ass version of its classic theme tune to ever be recorded. The full version of Lion’s track runs over the end credits, and features what is, unequivocally, the greatest guitar solo of a soundtrack that’s not exactly short on them.

Lion broke up in 1989, but weren’t ashamed in the slightest of their Transformers association, including the movie’s theme song on their 1987 album, Dangerous Attraction. Guitarist Doug Aldrich – he of most excellent solo prowess – would go on to record with Dio, Hurricane and Whitesnake.

The death, and the metal, continues. Just seven minutes into proceedings, and Megatron and his troops hijack an Autobot shuttle headed to Earth (from the Transformers’ home planet, Cybertron; or, rather, one of its moons, but let’s not get pedantic here). The evil ‘bots wipe out the crew – three fan-favourites, and Prowl – and announce their plans to slip past their enemies’ early warning systems in the captured craft. All the while, NRG’s Instruments of Destruction writhes and grinds away, frontman Les Brown adopting a distinctly James Hetfield-like, lip-definitely-curled growl as the (pretty graphic, tbh) cartoon slaughter plays out.

Florida singer-songwriter Stan Bush contributes two songs to the movie – the leader battle(s)-accompanying The Touch (which actually got a proper music video, and later appeared in Boogie Nights, American Dad! and the video game Saints Row IV) and the better but less pop culture-famous Dare (which, to be fair, was used brilliantly in Netflix’s Glow). Weird Al Yankovic pops up, too – but the remainder of the movie’s metal is served up by Canadian rockers Kick Axe. Sorry, I mean Spectre General.

With a couple of Billboard-charting albums behind them, and a new record about to come out on major label Epic (Roadrunner picked it up in Europe), Kick Axe were a quality acquisition for the Transformers soundtrack, arguably enjoying a higher profile than Lion or NRG. But for unclear legal reasons – one internet post posits that the movie’s producers thought “Kick Axe” was too violent-sounding, which is incredible given this sort of thing – the band was credited on the Transformers soundtrack, for the tracks Hunger and Nothin’s Gonna Stand In Our Way, as Spectre General.

Regardless of whether you call them Kick Axe or Spectre General, the quintet’s qualities shine through the carnage they accompany – with, it must be said, no little choreographic flair. The positive energy of Nothin’, with its sentiments of a new generation overcoming adversity, perfectly fits the sequence where the young Autobot Hot Rod comes to the aid of a grizzled old warrior, Kup.

Later on, Hunger – which could, reading its lyrics with adult hindsight, be more about illicit substances than any desperate desire for a burger (“I need it so bad that it’s burning me,” hmm) – is a blood-pumping accompaniment for a demolition derby featuring the same characters, and soon enough the Dinobots. Every punch and kick makes for additional percussion, and I love how a weird, inhuman groan on the track lines up with a Sharkticon losing its teeth at 1:55 in the clip below.

It all makes a kind of thematic sense, of course. Here’s a film about gigantic (toy) robots murdering each other – of course heavy metal fits the bill. (The film was even trailered as “the most incredible rock and roll adventure”.) But the movie’s production, through 1985 for a summer 1986 release, pre-dates the international emergence of, for example, Guns N’ Roses – Appetite For Destruction wouldn’t hit until the next summer. And while Mötley Crüe and Metallica were shifting units at the time, neither was close to hitting their own commercial highs – the former’s Girls, Girls, Girls came out in May 1987, and the latter’s self-titled ‘Black’ album wouldn’t make them legitimate global superstars until 1991.

Which is to say that, for a young kid like me, it was Transformers: The Movie, rather than an older relative with a cool record collection, that first opened my ears to metal. In the following years I’d soak up the sounds of the aforementioned trio, and many more, taking a formative turn into grunge when Nirvana blew up. But to this day, I’m eternally thankful to a feature-length toy advertisement for playing a significant part, alongside a steady stream of classic rock records during car journeys, in fostering a great affection for a killer riff.

And if you’re on the fence about the animated movie being the best one to bear the franchise’s name, let me leave you in the capable hands of moviebob’s Really That Good episode (spoilers aplenty, naturally) which concludes that, yes, 1986’s Transformers: The Movie really is that good. That it (really, really) rocks, too, is a bonus.