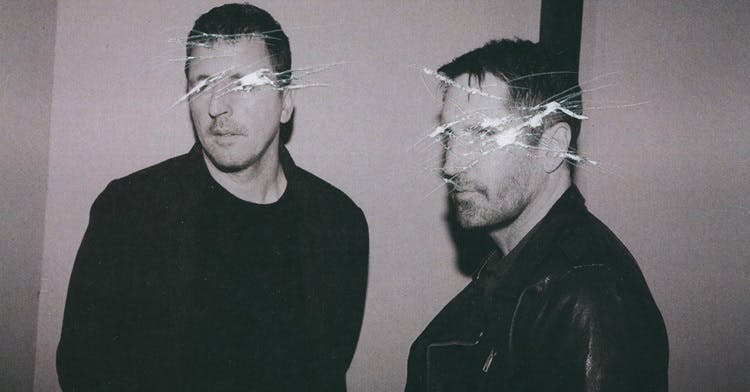 It’s surreal now to think about just how surreal it all seemed in 2011. “Wow,” said a visibly astonished Trent Reznor standing before a crowd comprised of Hollywood’s biggest directors and actors at LA’s Kodak Theatre. “Is this really happening?” he asked, the source of his surprise clutched firmly in his hands. Just moments before, Nicole Kidman and Hugh Jackman had opened an envelope and revealed that both Trent and his collaborator Atticus Ross had beaten the revered likes of Hans Zimmer and Alexandre Desplat to win the Music (Original Score) category for The Social Network soundtrack at the 2011 Oscars.

“To be standing up here in this company is humbling and flattering beyond words,” Trent continued holding his shiny new award. At the time his shocked reaction made perfect sense. For those who had followed his career since its noisy, groundbreaking inception, it was a strange sight indeed to see the man who had once delivered industrial barrages like Happiness In Slavery in a tux, looking far more Bond than bondage.

It’s worth repeating this incongruity because now, in 2021, it’s getting increasingly hard to imagine a prestigious film or TV ceremony ever taking place without Trent and Atticus being there. Over the past decade, the pair have established themselves as two of the most accomplished and in-demand composers in the world. Consider this for a moment: should they win Best Score at this year’s Oscars, one of the fellow award hopefuls they will have beaten will be… themselves. Not only are Trent and Atticus up for their work on David Fincher’s Mank and Pete Docter’s Pixar film Soul (which they co-scored with Jon Batiste), they were, deservedly, in the same double-trouble position at this year's Golden Globes, eventually winning the Best Original Score gong for Soul.

The question is not “is this really happening?” but rather, how did this happen?

While it’s possible to look at Trent and Atticus’ breakthrough success with The Social Network as a case of (quite literally) scoring big on their first attempt, it’s also somewhat misleading. For over two decades previously, Nine Inch Nails’ music had been assaulting not just the charts but a variety of other mediums. There has, it seems, always been something about Trent’s sonics – its majestic ability to veer between soul-gnawing fragility and ear canal-annihilating aggression – that made it perfectly primed for film and TV. In 1994, Trent was compiling the soundtrack for Oliver Stone’s controversial film Natural Born Killers – contributing both new and reprised NIN music. In 1996, he unveiled his pant-browning score for id’s seminal first person shooter Quake before re-entering Hollywood’s orbit the following year by producing the soundtrack for David Lynch’s Lost Highway. Even when Trent wasn’t explicitly soundtracking a project, Nine Inch Nails’ music was working overtime to lend a sense of grandeur to some films –2009’s Terminator Salvation may have disappointed fans, but its menacing trailer set to the strains of The Day The World Went Away was a glimpse of all that could – and should – have been. As tempting as it is to look at the past decade as marking the ascension of Trent Reznor The Academy Award Winner™, in truth the surprise isn’t that he took to scoring a full film in 2010, it’s that he didn’t do it sooner.

What remains so impressive is not just that Trent and Atticus have achieved such success in Hollywood, it’s also the manner in which they have infiltrated it. Much like they did in the music industry, they conquered it on their own terms. Trent and Atticus have brought their own elegant, eerie and atonal stamp to Hollywood. There are many composers that excel at channelling gorgeously dissonant scores – Thomas Newman, we're looking at you, buddy – but Trent and Atticus’ is a brand that's identifiably their own. But while their scores have provided the perfect foil for darkened material, such as David Fincher’s Gone Girl and The Girl With The Dragon Tattoo, Peter Berg’s Patriots Day or HBO’s Watchmen, it’s a testament to their skill that in recent years their sound has acted as a magnet for films outside of that darkened remit, too, such as Mid90s. Irrefutable proof of this came when they soundtracked Pixar’s 2020 film Soul – and reduced many to tears in the process.

What Trent and Atticus have given the film and TV world is, then, self-evident. But less considered is what it has given back to the pair. When it came to scoring Ken Burn’s enthralling 10-hour-plus Vietnam documentary, it opened up whole new ways to approach music.

“Ken sent us a list of words that we started building stuff around and kind of states of mind,” Atticus told K! back in 2017. “There would be an evocative list that Ken wrote that we worked towards, creating pieces that evoked these emotions he described.”

“It wasn’t scoring the picture,” said Trent of the gargantuan scoring task they had taken. “A lot of it was me asking Ken, ‘Could you come up with a list of emotional themes that you need covered?’ He gave me a really interesting list of things that were great as a composer [to work with] – for us it was a dream come true.”

All of this has had some incredible side-effects for its creators.

“We’ve been very fortunate that we’ve been able to do other things that are creative in slightly different ways – working on film scores and whatnot – that keep it exciting,” Trent told us in 2017. “What we’ve learned from working with other people on more soundtrack/scoring type things is you’re part of a team and you’re helping tell a story – you’re not the sole storyteller. It’s an interesting way to work, and it can complement what we do when we’re then set free and able to do whatever we want.”

“We work fast, and the way that we work often is there’ll be another project going on,” Atticus agreed. “You can work on Nine Inch Nails for, say, a week or two weeks and give it 100 per cent, but at a certain point of time it’s worked to change one’s mindset to deep dive on something else. It’s just balancing. That way nothing ever feels tired, it allows one to feel energised.”

It is, it seems, no coincidence that some of Trent and Atticus’ latter day music – in both film and NIN – has been some of their most expressive and experimental. Many collective eyebrows raised in surprise when Nine Inch Nails incorporated the saxophone on 2018’s Bad Witch, but it was naught compared to the big band work the pair conjured on Fincher’s Mank. Trent said he was falling asleep listening to foxtrot music, Atticus meanwhile told Variety how they strived to meet David Fincher’s edict of making the music “sound drunk”. It’s astounding to think the same people behind Year Zero’s Survivalism also wrote Mank’s A Fool’s Paradise.

What this all amounts to is a thrilling addition not only to the soundtrack world, but also their own discography. The fact is, you cannot talk about Trent and Atticus’ masterworks without including the tender Hand Covers Bruise (The Social Network), the Twin Peaksian strains of Like Home (Gone Girl), or the exacting grace of Epiphany (Soul). Atticus and Trent conquered Hollywood much the same way they the music industry. By being themselves.