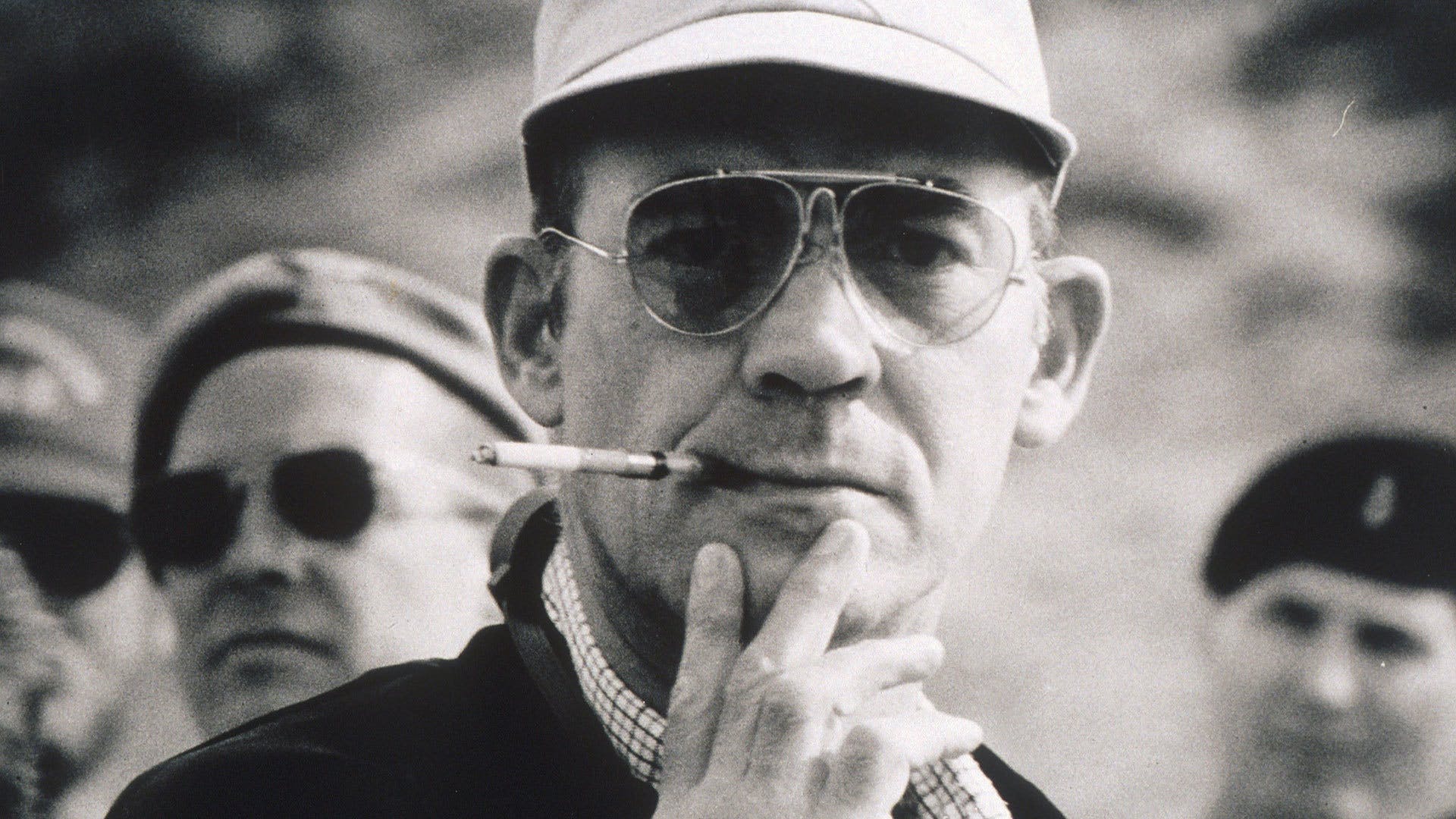 Writer. Rebel. Freak. Hunter S. Thompson possessed one of the finest minds and the loudest voices of his generation.

Aside from his eccentric and gargantuan personality, the journalist is perhaps best remembered for writing Fear And Loathing In Las Vegas – a hooligan’s guide to taking narcotics in the glittering bowels of America, that cemented him as the lionhearted, acid-spitting architect of gonzo journalism.

Through the drugs, the attitude and the excess, Hunter S. Thompson is arguably the greatest rock star who never recorded a note. So, it’s no surprise a counter culture titan of his magnitude left an imprint in rock music that can still be felt today.

The likes of Keith Richards and Johnny Depp fraternised with him (more on that later), while bands such as Bring Me The Horizon, Avenged Sevenfold and Panic! At The Disco borrowed from his visceral and emotive writing. Although it would be impossible and inane to index the full impact HST had on music, we’ll instead embark on a savage sightseeing journey through our favourite Hunter S. Thompson references in rock – from the deeply morbid to the out-and-out absurd.

Oh, and please prepare yourself for the most ridiculous rock star story you’ll read today, towards the end of this expedition…

Brandon Flowers of Las Vegas outfit The Killers maintains that the lyric, ‘Are we human, or are we dancer?’ was inspired by a line from Hunter S. Thompson’s work. But, honestly, who gives a shit about that?

Instead let’s look to fellow Las Vegans, Panic! At The Disco. Frontman Brendon Urie has made no secret of including influences from his hometown in his music and nowhere is it more apparent than on their 2013 album, Too Weird To Live, Too Rare To Die! If that album title sounds familiar, then it may be because it’s borrowed from one of HST’s most famous quotes. “There he goes. One of God's own prototypes,” he wrote of Fear And Loathing’s Dr Gonzo, “A high-powered mutant of some kind never even considered for mass production. Too weird to live, and too rare to die.”

And Brendon isn’t the only musician to have lifted from the godfather of gonzo. Bring Me The Horizon’s 2008 album Suicide Season contains a song about wild and damaging nights out, which bears the name Football Season Is Over. Through absolutely no coincidence whatsoever, Football Season Is Over is also the title of Hunter S. Thompson’s suicide note. A grizzly reference, sure, but a relevant one nevertheless.

Elsewhere, perhaps the richest source of HST references in rock is Avenged Sevenfold’s 2005 single Bat Country and its accompanying music video. The title itself is lifted from the Fear And Loathing line “We can't stop here, this is bat country!” which is barked by protagonist Raoul Duke – a thinly-veiled alter-ego of Thompson himself – as he’s plagued by hallucinations of bats that descend on the character’s car during the frantic drive to Las Vegas.

The album version of Bat Country opens with a voice snarling, “He who makes a beast of himself gets rid of the pain of being a man,” a quote from 18th century British author Samuel Johnson, which not only prefaces the video for the song, but also the book version of Fear And Loathing itself. And the references don’t stop there.

Thematically the song is identical to Fear And Loathing and the video even sees the band pounding through the desert pursued by a cloud of bats. Stylistically the clip is also homage to Terry Gilliam’s 1998 Fear And Loathing film adaptation, through its psychedelic visuals of lurid hotel rooms and gurning inhabitants of the Vegas strip. The album version of Bat Country even closes with the line, 'I'm too weird to live but much too rare to die'. Okay, we get it, you like Fear And Loathing. A lot. And why not?

The aftershock of Hunter S. Thompson’s isn’t just found in rock’s lyrics and titles – it’s also woven into the fabric of the genre itself. Just ask Slipknot frontman Corey Taylor, who has a gigantic Hunter S. Thompson tattoo on his right forearm. Notably, the portrait is actually of Johnny Depp in his role as Raoul Duke AKA Hunter S. Thompson, rather than of Thompson himself. Still, Corey also reportedly took influence from the journalist for lyrics to the first Slipknot album, as well as elements of his own books, so this is one rock star reference that is more than skin deep.

True to the book, there’s a scene in Gilliam’s Fear & Loathing adaptation that sees a businessman walk out of a toilet cubicle, straight into Raoul Duke (Depp) who – having spilt acid on the sleeve of his shirt – is having it sucked out of the fabric by a hippy. “With a bit of luck, his life was ruined forever,” he says of the businessman. “Always thinking that just behind some narrow door in all of his favourite bars, men in red woollen shirts are getting incredible kicks from things he’ll never know.”

Look a little closer at that hippy though and you might just recognise him. Cast in the part of the sleeve sucker is none other than Red Hot Chili Peppers’ bassist, Flea. We can’t be sure he’s a die-hard HST fan as he’s also had parts in everything from The Big Lebowski to Baby Driver, but this is one oddball rock star/Hunter S. collision we couldn’t leave off the table.

And as we end this bizarre and haphazard plunge through rock, here’s a video of Hunter interviewing Keith Richards – a fantastically oddball conversation about everything from reincarnation to The Rolling Stones, that we couldn’t help but include.