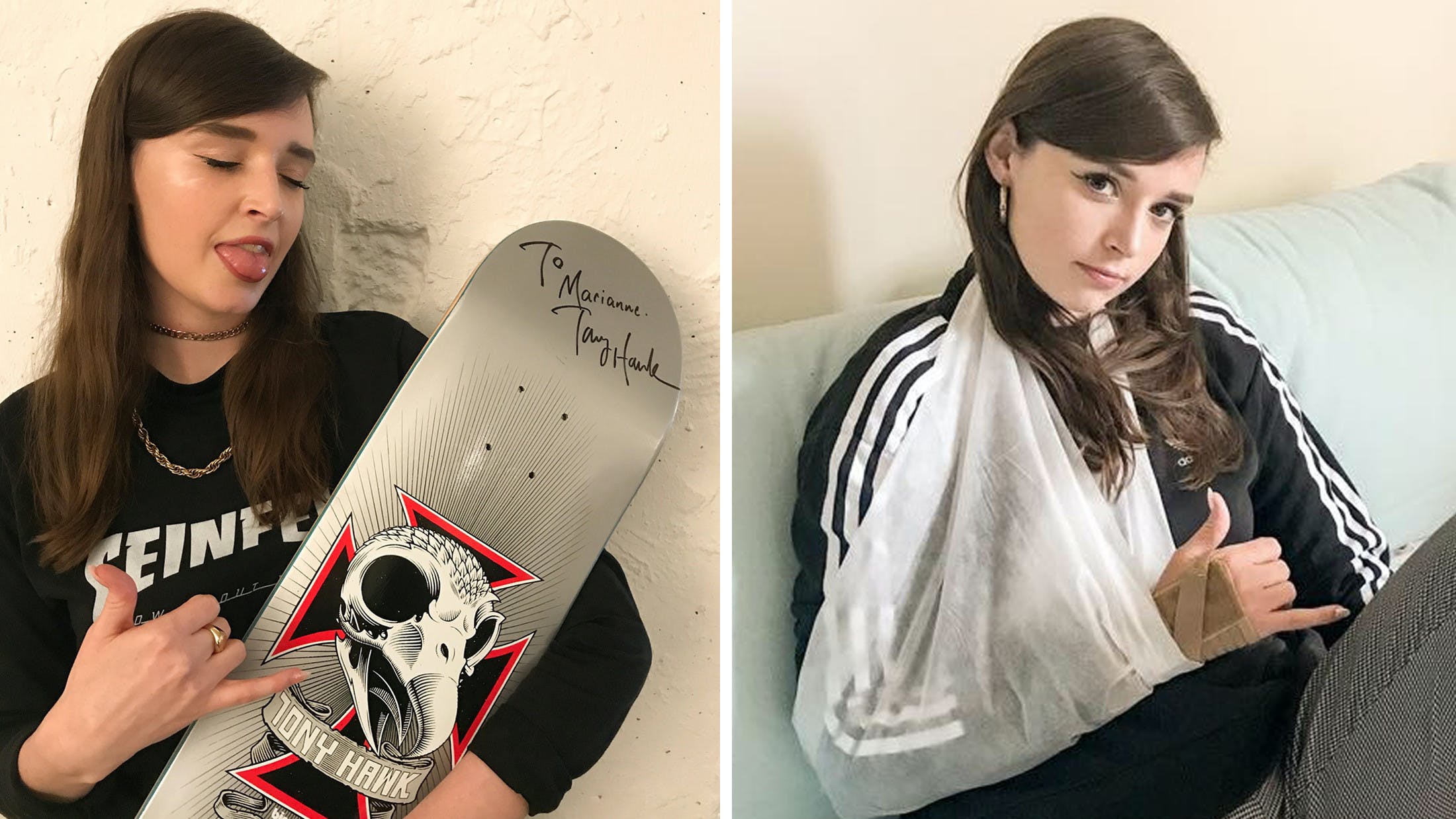 As I type this, both of my wrists click painfully at random intervals. My elbow sticks out awkwardly after I broke it last month; my knee sears with pain every so often; if I look down, I can see scars on the palms of my hands and both of my ankles. But don’t feel too sorry for me: every single one of these awkward, painful, perhaps lifelong marks is a result of my body being thrown against the ground after taking a spill on a skateboard as an adult woman. They all happened in the last 18 months, after I took up skating again for the first time in over 10 years.

In June of last year, I wrote a piece for Huck about how, after spending my childhood skateboarding regularly, I gave it up as a teenager because I was too self-conscious to do it in front of the boy skaters I’d befriended. I’d spent my life embedded in skate culture; learning with my cousins’ friends, wearing the clothes, playing Tony Hawk’s Pro Skater. But suddenly I felt aware of myself: while the skaters I knew might never have mocked me, I stopped, aware that skating wasn’t for girls. And I stopped in private, too, because I was a teenager with much better things to do, like drinking under bridges. I handed my skateboard down to my sister, and I moved on.

All I wanted from the essay was to write about how and why I had loved skating so much; about the freedom and identity it had afforded me, about how it shaped who I am today. I perhaps expected some women to relate to it. I didn’t expect it to lead to support from the most unlikely of places: Tony Hawk, who read the article, and after speaking on Twitter encouraged me to take it up again despite my fears. He sent me a deck and assured me that things were different – better – for women skaters now. And who was I not to listen to Tony Hawk? Shortly after, I bought a new skateboard and was happy to learn that House of Vans ran a women’s night where I could go and practice with other girls and women who were self-conscious picking up a male-dominated sport. I practiced alone on weekends and after work, and I found myself enjoying something that made me feel as free as it did when I was 11. Shortly after that, I found myself in A&E with an injured wrist after my first fall.

Tony was right: a lot had changed in a decade. There were women skaters, incredible ones, to look up to. There were girls’ nights that I could attend; friends who wanted to take it up; the scene was growing and expanding in ways I hadn’t predicted when I was the only girl I knew skating around my village. But my body had changed, too; as well as the usual decline we expect with age, I had noticed my body was abnormally fucked. I’m hypermobile, which means that a lot of my joints bend too far. As a result, the joints and muscles in my entire body constantly hurt and make noises they shouldn’t. My knees regularly cease working entirely and leave me bedbound; all of which meant I was more prone to injury anyway, giving me every reason to quit again. It also gave me every reason to continue: these problems leave me feeling as if my body is not mine. I feel like it’s failing me and there’s nothing I can do; I’m trapped in my own body. Skateboarding made me feel in control again, and at least my injuries had a funnier story than “I stood up wrong”.

Spurred on by the encouragement of the women skaters I had met, I was not remotely deterred by my injury and was, perhaps stupidly, back on my skateboard within a week of my A&E visit. Later in the year, Huck asked me to interview skateboarder Stefani Nurding, whose enthusiasm and focus on inclusivity only made me want to push harder. She added me to a Whatsapp group of women skaters who discuss where they’re meeting, share equipment, and give each other encouragement and pointers when they post videos. I went to another girls’ night, made more friends, kept trying. I kept failing, too: falls that anyone else would get up and walk away from had me limping home to cry in a warm bath for a week. My bones screamed at me, my knees were furious from all the attempted and often-failed ollies; my body is not what it was when I was 12.

But still, I didn’t give up. I got more skating assignments: I wrote the cover for Time Out’s skateboarding issue this summer, and spoke to more incredible women and girls whose tenacity and fearlessness made me feel stupid for even considering quitting. I flew to Sweden to interview Lizzie Armanto, who had recently completed Tony Hawk’s Loop of Death. I have been grateful for these opportunities, and for the man whose kind – and evidently true – words forced me back into skating. I have taught and encouraged female friends to pick up their own skateboards. I bought my 12-year-old year old sister one last Christmas, and she’s ridden it constantly since, despite her own hypermobility causing her pain far earlier than mine did. I don’t want her to be in pain, but I’m not going to keep a 12-year-old inside wrapped in bubble wrap when skating makes her so happy.

Last month I had my worst injury yet. After barely recovering from a problem with my knee that had, as always, arisen from nowhere, I went to a girls’ night on a Thursday where I fearfully took part. On the Saturday, I went skating with a friend – just along a smooth path, taking it easy like I’ve done a 1000 times since I was seven. I wasn’t trying anything new or pushing myself in the slightest, but the next second, I was on the floor. I don’t know what sent me flying, but I do know what came next: a giant bruise on my knee, smaller ones on both legs, both hands cut to bits, my elbows bruised and grazed, and an arm I couldn’t really move at all. I got up, I walked it off, I told myself that it wasn’t so bad. Later that day I was in agony; at A&E, after seven hours sobbing and being fed codeine, I was told that I had broken my elbow and potentially my scaphoid. I was put in a pink plaster cast and sent on my way, screaming every time my Uber went over the slightest bump.

Nursing my swollen arm in A&E, I beat myself up constantly that it was my fault for doing this to myself. Why had I gotten into skateboarding again? I knew my body wasn’t like other people’s, and yet, I kept pushing it. I would have to work, travel, live, all in a cast. A few days later, on a work trip alone to New York, struggling to dress myself and wearing a cap for two days because I couldn’t even brush my own hair, I swore to never skate again. The weeks that followed, difficult weeks of tears and pain over the slightest task, I beat myself up constantly for doing this to myself.

And now? Well, it’s like childbirth: you forget just how much it hurt because the reward is so high. I grew up around skaters, seeing them brag and brush off bones sticking out of ankles and bruises and split lips. The difference is that they, for the most part, recover. But if I’m going to be bedbound for taking the wrong step or bending my back too far, I may as well do something that makes me so happy, that makes me feel like my body can do something right. And will I skate again? For now I’m still recovering, but sure, I’m pretty certain I’m stupid enough. But what I know for sure is that even if I don’t, I’ll still be at the women’s nights. I’ll still be writing about skateboarding. I am still grateful for everything that it’s brought me; the friends, the sense of self, the understanding of my own relationship to my body. And for all of that and for the broken bones, I have Tony Hawk to thank.