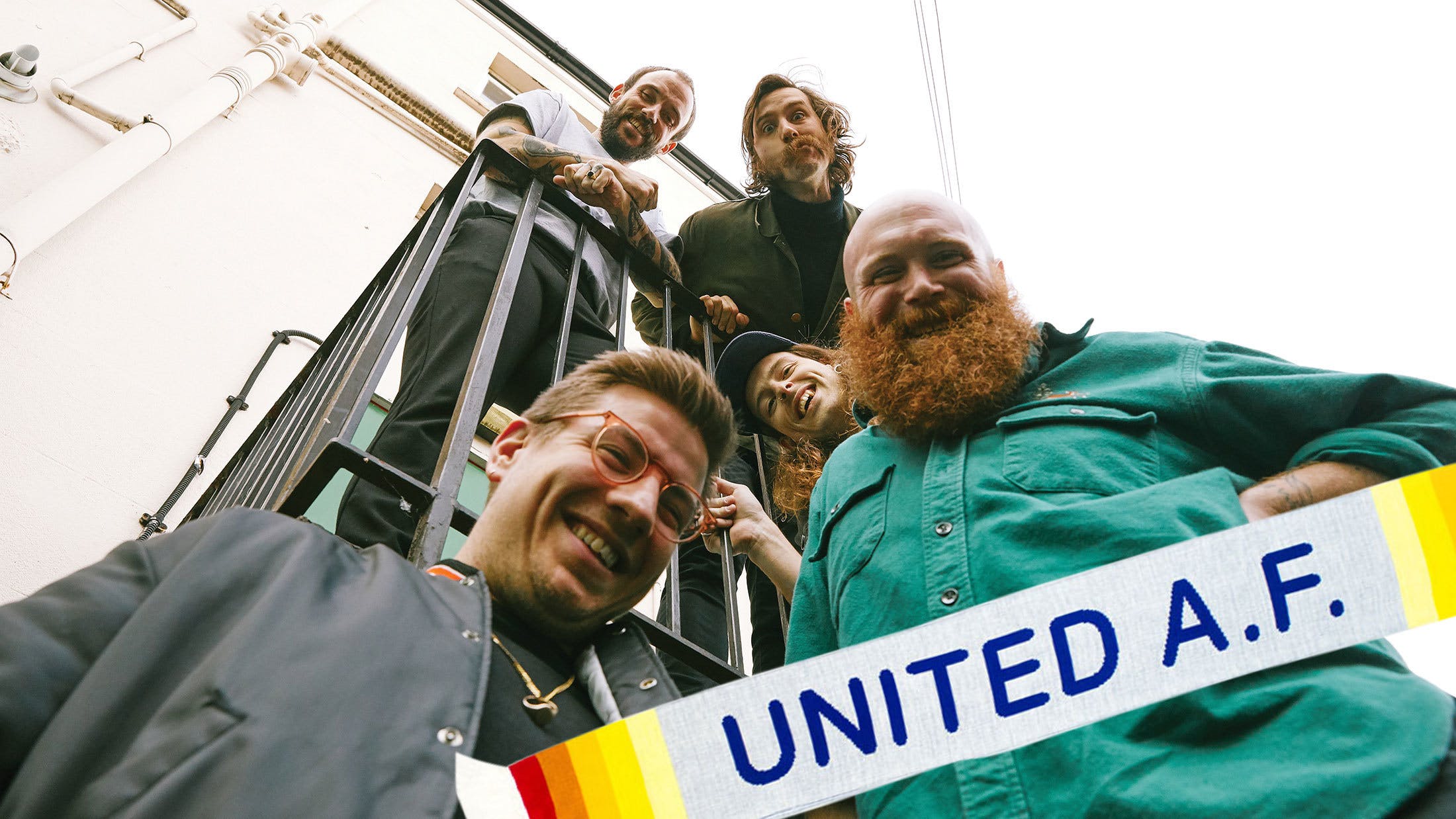 IDLES might have released Joy as an Act of Resistance last year, but the album’s nomination for the Mercury Prize has propelled it back into spotlight – that is, if it ever really left. One of the hottest UK bands around right now, IDLES have risen from obscurity in Bristol to headlining London’s 9,000 person Alexandra Palace later this year, generating hordes of fans in their wake.

Wherever IDLES go, the AF Gang will follow. With over 20,000 members, the IDLES fan group is home the most dedicated fans on the planet. We may have become more accustomed to Killjoys, Beliebers and Directioners in recent years, but the AF Gang are the new old kids on the block. In an age of Stan Twitter and fandom rivalries, the AF Gang are bringing back the classic fan community, adapted for 21st century lifestyles.

The brainchild of photographer Lindsay Melbourne, she formed the AF Gang in 2017 after spending some time on tour with IDLES. “I kept meeting the same people at the shows,” Lindsay explains, “and within minutes people were opening up to each other and sharing their lives, mental health battles, personal stories and talking about how IDLES were helping.”

It’s almost charming that in 2019, a fan club can gather so much momentum. Lindsay has prior experience in dedicated fandom from a time pre-Facebook and music streaming. Describing her past, she says that “having been part of a huge fan community in the 2000s, I just knew that I had to do the same for IDLES fans. I asked Joe's [Talbot] permission and he was flattered, and they have been hugely supportive since.”

Endorsed but not created by the band, the AF Gang are a new kind of fan club. There’s plenty of interaction between the band members and the Gang, often popping up in the Facebook group to post the occasional comment. In the group’s description, there’s an explanation from Talbot, in which he describes the fan club as a ‘marvellous creation that has helped us become better musicians’. By bringing together the band and the fans, the AF Gang manages to break down the boundaries between them.

The success of the AF Gang is in no small part down to the work Lindsay has dedicated to the group. She works alongside Louise Hughes and Brian Mimpress, the three of them coming together to make the group what it is today. “Lindsay asked me if I would like to come onboard,” says Louise. “It has evolved in the most organic way possible but there’s no denying that IDLES’ music, lyrical content, and ethos were the catalyst. For me, I feel they are the most important band of my lifetime.”

Two years after the formation of the Gang, its thousands of members post daily about topics ranging from their other favourite bands to mental health, relationships and illness. Lindsay wanted to create a space for fans to discuss, vent and seek support, and it’s safe to say that the AF Gang has fulfilled its objectives. And as IDLES go from strength to strength, the group too has grown at an unprecedented rate.

Hollie Shepherd has grown up with social media and sees the benefit that the AF Gang can bring. She calls it “one of the most continuously positive things I’ve seen on social media in recent years… The posts I see are so raw and unedited and I know that if I ever needed a place to open up that they would be on the other end to help me out.”

With songs like Samaritans and Television, IDLES have become known for their forthright stances on mental health, positivity and love, and this is reflected in both the AF Gang and the band’s fanbase as a whole. Inclusivity is at the heart of what IDLES are about, as they call upon women to join the pit at their shows, and praise immigrants, the NHS and femininity from the rooftops.

It’s no surprise that for fans like Hollie, the Gang is a safe place to talk. It’s all part of the appeal for Senay Sargut, too. “I'm at the age where most of my friends have got married and had children. Discovering IDLES has been a breath of fresh air - not only do I love their music, but them as people, and everything they stand for,” she says.

One member of the AF Gang who can relate to this more than most is Paul Foot, who suffered a stroke last year. “The level of support I received from the AF Gang was overwhelming. The support in all forms from the gang is immeasurable – from cards and music through the post, to gig tickets and band merch.” He calls the group “The most beautiful place on the internet”, and on that basis, it’s pretty difficult to argue.

There aren’t too many contemporary bands with such a diverse fanbase as IDLES, as the AF Gang comprises punks and indie kids of all ages; at their gigs, you’re as likely to bump into a Red Stripe-swigging 19-year-old as you are a middle-aged history teacher.

Tracey Skarzynska’s first exposure to live music was an Angelic Upstarts gig in 1979, and forty years later she is still active in the punk scene. “I still go regularly to gigs,” she says, “and the AF Gang/IDLES community are like the ‘punk tribe’ of yesteryear. There were different styles and subcultures around, but we mainly stuck together, and watched each other's backs.”

It's apparent that, for many AF Gang members, the group itself is a bit of a throwback to punk. Hollie’s mother, Sue Dyes, is also part of the Gang. She says, “The music is reminiscent of '80s punk, and being heavily involved in that scene, it reminded me of what it’s all about… Coming from a family with an immigrant mother it has reassured me that people are still welcomed and wanted in the current political climate.”

A throwback it might be, but social media has undoubtedly made things easier. “In those days of the fan clubs it was easy to get involved by writing to a PO Box number and sending off postal orders for membership,” says Stephen Mead. “I think the internet and social media has developed on that now. It’s easier to contact bands directly and get up to date information rather than a monthly newsletter.” Tracey agrees, explaining that with the rise of social media, “We now know what is going on, and where. It's opened up so much, we are so lucky.”

Charles Furniss sees little in common between the AF Gang and the fan clubs of yesteryear – according to him, the AF Gang is better. “With the AF Gang, and other similar fan communities, it is the fans who set the agenda for the direction; offering support, advice, news and recommendations,” he argues. “The band and their record company have little control over the direction things take, but in IDLES’ case, the AF Gang’s whole ethos closely reflects the band’s own, promoting a unity. In short, AF Gang is nothing like those fan clubs.”

It’s rare to see social media used in such a positive way. The pitfalls of sites like Facebook have been well documented, but there’s seldom a negative moment in the AF Gang. As much as life will have its ups and downs, the Gang are there to see each other through it all. Cyberbullying and trolling might as well be non-existent here, through a combination of active moderation and the fans just being a genuinely decent bunch.

IDLES fans are pretty diverse, but the AF Gang has love and positivity at its heart. Hollie describes IDLES gigs as feeling like a “family reunion”, seeing the band live with her mum. Senay expands: “A place like the AF Gang attracts like-minded people. I've made great friends and now when I go to gigs I'm surrounded by fellow AF Gangers who bring me joy.”

“There could be hostility at away gigs [in the late ‘70s and early ‘80s], particularly if there was a skinhead presence.” says Tracey.

“This is where the AF Gang are different, welcoming all with open arms.”