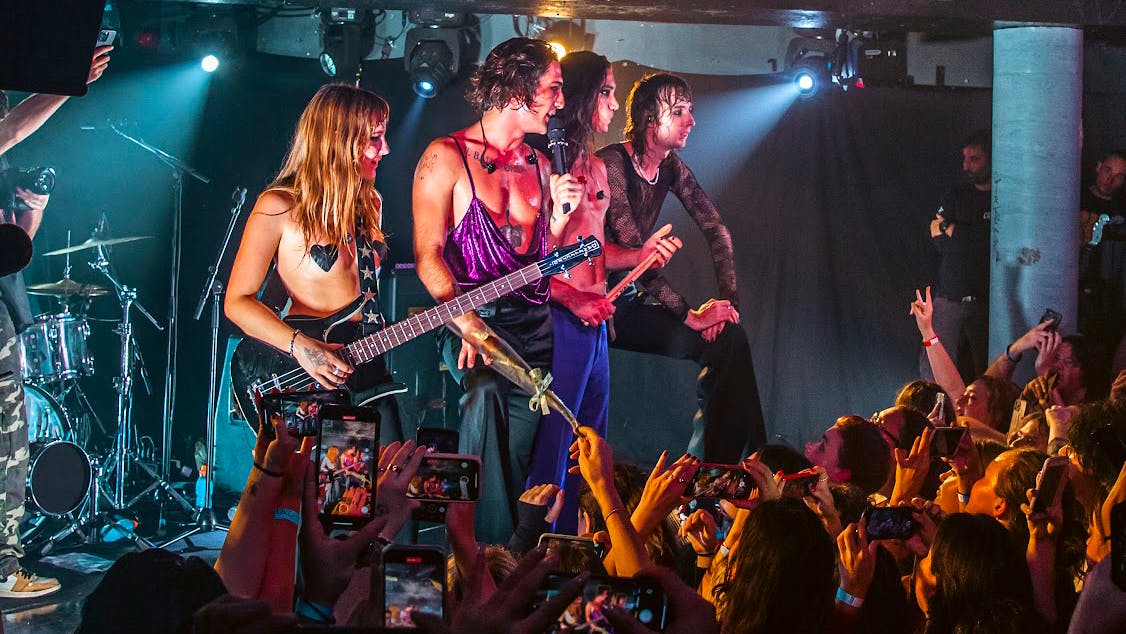 Italian rock’n’roll superstars Måneskin rolled into London last night for a special intimate gig at London’s iconic Underworld venue in Camden. Fans queued for hours throughout the day to guarantee a place at the 500-capacity show, which also acted as the launch party for the band’s new single The Loneliest – their first-ever English language ballad.

The room was packed to the rafters with fans eager to get up close to a band about to go stratospheric (they’re headlining the 20,000-capacity The O2 next year). And as the really, really, really, ridiculously good-looking band tore through their 45-minute performance, including Zitti E Buoni, SUPERMODEL and their cover of Beggin’, the sweat-covered crowd bellowed along with every single world like their lives depended on it.

And when it came time to close the nine-song set with The Loneliest, the fans stuck around, chanting for more, until Damiano, Victoria, Ethan and Thomas returned to run through their new single again – with fans already singing along.

They say you play the Underworld twice in your career – once on the way up and once on the way down – but don’t expect Måneskin to make their way back to this corner of London for a long, long time.

Måneskin are on the cover of the autumn issue of Kerrang!. Get your copy now.

Måneskin: “We worked our asses off to get here, but we also know this isn’t something that happens every day”

Post-Eurovision, Måneskin have become one of the world’s biggest bands. Now preparing to headline The O2, we caught up with the Italian rock’n’rollers to see just how wild their lives are getting, and why none of them seem to like wearing clothes…

“It’s a personal song but I hope you can all relate to it in your own way…” says Damiano David of Måneskin’s new single, The Loneliest.