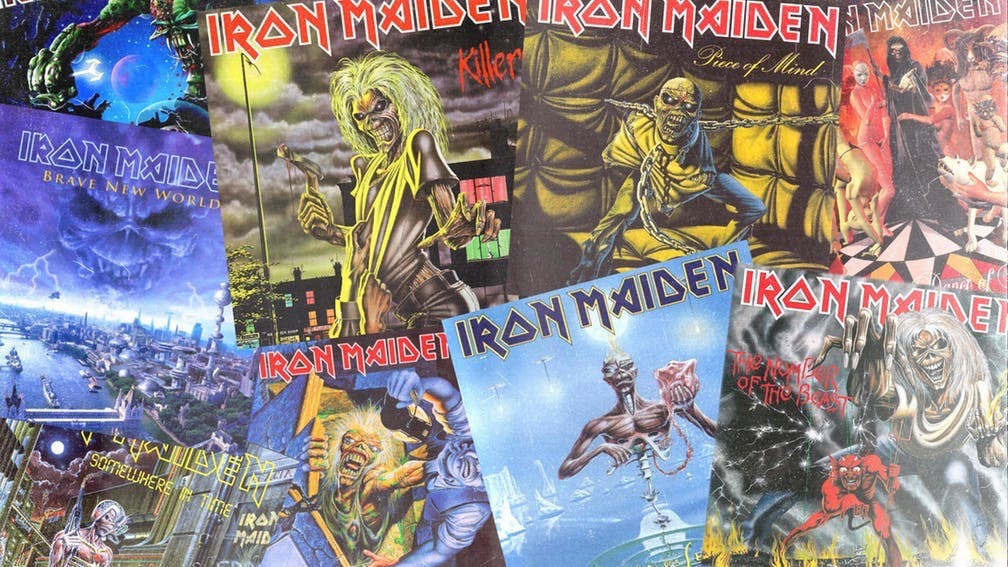 It’s a question that every metalhead has asked themselves – what is the best Iron Maiden album? And frankly, we were tired of arguing across the office and down the pub every single week, so we asked you to vote for your favourite Iron Maiden album of all time. Thousands and thousands of you cast your votes for one of the 16 LPs to come from the East London legends, and we can reveal those results below – complete with narrative from one of K!’s biggest Iron Maiden fans.

So, let’s get to it. Here’s every Iron Maiden studio album ranked in order of greatness – according to you! So no arguing, alright?

Blaze Bayley’s immediate family probably wouldn’t claim that era was Iron Maiden’s finest and it seems you lot agree. There were some good moments on Virtual XI, particularly in Braveheart-themed epic The Clansman, but on the whole this was far from a classic Iron Maiden album.

That title and the fact that Steve once said he envisaged Maiden making 15 albums (this was their 15th) had many people thinking this was the end. It wasn’t of course and, despite propping up the back-end of this list, it became their first UK Number 1 album in almost two decades.

There was strife in the Maiden camp by the end of the ’80s and that filtered into the slightly lacklustre No Prayer For The Dying. It did score their only Number 1 single though in Bring Your Daughter… To The Slaughter. Bruce had originally recorded it for A Nightmare On Elm Street 5. Steve told us, “Bruce played me the song and I said, ‘You bastard, it’s a fucking great song! We could do a fucking great version of that!’”

Kerrang! writer Chris Watts described the first Iron Maiden album with Blaze as a comedy record, prompting Steve Harris to turn up at the offices with the aim of confronting him. “I’m glad he wasn’t there ‘cause if he had been I’d have whacked him,” he told us later. Fuelled by Steve’s divorce, the album had a grittier sound and certainly wasn’t as bad as all that.

This saw a couple of firsts in the band’s only wholly acoustic track Journeyman and Nicko McBrain’s first writing credit on New Frontier – which explored cloning from the Born Again Christian drummer’s point of view. It’s also notable for inspiring that jig Janick Gers does when they play the title-track live…

At the end of the 1970s the UK was all about punk rock, but Steve Harris had a different vision in mind. It’s true that vocalist Paul Di’Anno did have a punky rasp to his delivery, but Iron Maiden offered something more musically complex and epic, if no less aggressive. Their debut album spearheaded the New Wave Of British Heavy Metal and provided the launchpad for everything else to come.

Forty years after emerging from London’s East End, Iron Maiden were bigger than ever, but they also faced their biggest challenge. It wasn’t diagnosed until after the recording, but Bruce was found to have a cancerous tumour at the back of his tongue. The release of The Book Of Souls was pushed back while he recovered from treatment, but the album and subsequent world tour marked a huge and entirely triumphant return.

They’d always had a penchant for the odd epic, but this marked a transition of focus from the punchier metal anthems of old to a more convoluted and experimental phase. They also took the bold decision to play the war-inspired album in its close to 70-minute entirety live.

In 1992, Nirvana were completely reshaping the musical landscape. It’s been said that grunge killed the hair metal bands, but it couldn’t see off Iron Maiden, who scored their third UK Number 1 album. It would be Bruce’s last album with the band for a while, but it was a cracker to sign off on, with the title-track in particular going on to become one of Maiden’s defining songs.

Released less than a year after the debut, Killers followed a similar formula with a few refinements. Martin Birch, who would produce every Iron Maiden album until 1992’s Fear Of The Dark, brought a crisper, clearer sound while guitarist Adrian Smith was brought in to forge that classic partnership with Dave Murray. Kerrang! forerunner Sounds gave it a one-star review and claimed it was “more of a failure than a triumph” but it’s stood the test of time.

This was a comeback for a band that had never actually been away. “Things were not so chirpy in Maidenworld… It was hard for the band to adjust to their dwindling audience,” Bruce noted in his autobiography, regarding Maiden’s late ’90s era without him. The answer was to get the human air-raid siren back onboard, along with guitarist Adrian Smith as part of an 18-string guitar attack. The resulting album was also an instant classic, with the likes of The Wickerman and Blood Brothers becoming firm fan faves.

For many fans, the personnel that went in to record Piece Of Mind – Bruce Dickinson, Steve Harris, Dave Murray, Adrian Smith and newly recruited drummer Nicko McBrain – remains the definitive Maiden line-up. It built on the international success of The Number Of The Beast and established them as the biggest metal band in the world. It also baited the religious right who had labelled the band devil worshippers and protested their shows in the U.S. with a backwards message on Still Life – which turned out to be a drunk Nicko taking the piss.

After their huge success in the first half of the decade, Maiden found themselves burned out and creatively at odds. Bruce wanted their next album to be an acoustic, unplugged kind of affair years before MTV started doing it. The rest of the band disagreed and rightly so. Somewhere In Time was more experimental, with guitar synthesisers and a more layered approach to the songwriting, but without being unrecognisable. The accompanying tour was also notable for its use of inflatables – once described by Kerrang! as ‘like a bouncy castle version of Blade Runner’ – which would occasionally deflate at key moments.

Whether he jumped or was pushed (which varies depending on who you ask), hard-living former vocalist Paul Di’Anno had become a liability. The addition of Bruce Dickinson took Maiden to another level, with his theatrical presence and wailing delivery allowing them to write a more expansive and epic album. It worked a treat. The band were pushing a broken-down bus up a hill in Switzerland when they learned that The Number Of The Beast was the UK’s Number 1 album and it also established them as a global force. Spooky snippet: when producer Martin Birch was involved in a car crash, he was presented with a bill for… yep, £666.

You might think that once you’re the biggest metal band in the world, there’s nowhere to go but down. ‘Bollocks to that,’ thought Maiden and made things even bigger. Powerslave remains an essential Iron Maiden album, with classic, relatively compact sluggers like Aces High and 2 Minutes To Midnight alongside the truly epic Rime Of The Ancient Mariner – based on the Samuel Taylor Coleridge poem it clocked in at almost 14 minutes, setting a benchmark for latterday compositions like Empire Of The Clouds. The accompanying World Slavery Tour was also mind-bogglingly vast and was captured in all its glory on Live After Death, one of the finest live albums ever made.

“We’ve never managed to pull anything like this off before,” Steve Harris told K! shortly before the release of Seventh Son…. “For me, it’s like the enormous leap we suddenly made from our first two albums to releasing Number Of The Beast – very much a step forward, a step up.” It seems many of you agree as you’ve voted the band’s ’80s peak and only true concept album as Iron Maiden’s finest hour. “It’s a classic story of good versus evil, only with no guarantees whatsoever that it’s the good guys who eventually come through,” said Bruce of the tale of a boy with supernatural powers. Magical concept aside, it also saw the band at their musical best – dynamic, punchy and epic all at the same time. More than 30 years on, it remains an absolute metal classic and one that has rarely been matched, let alone beaten.