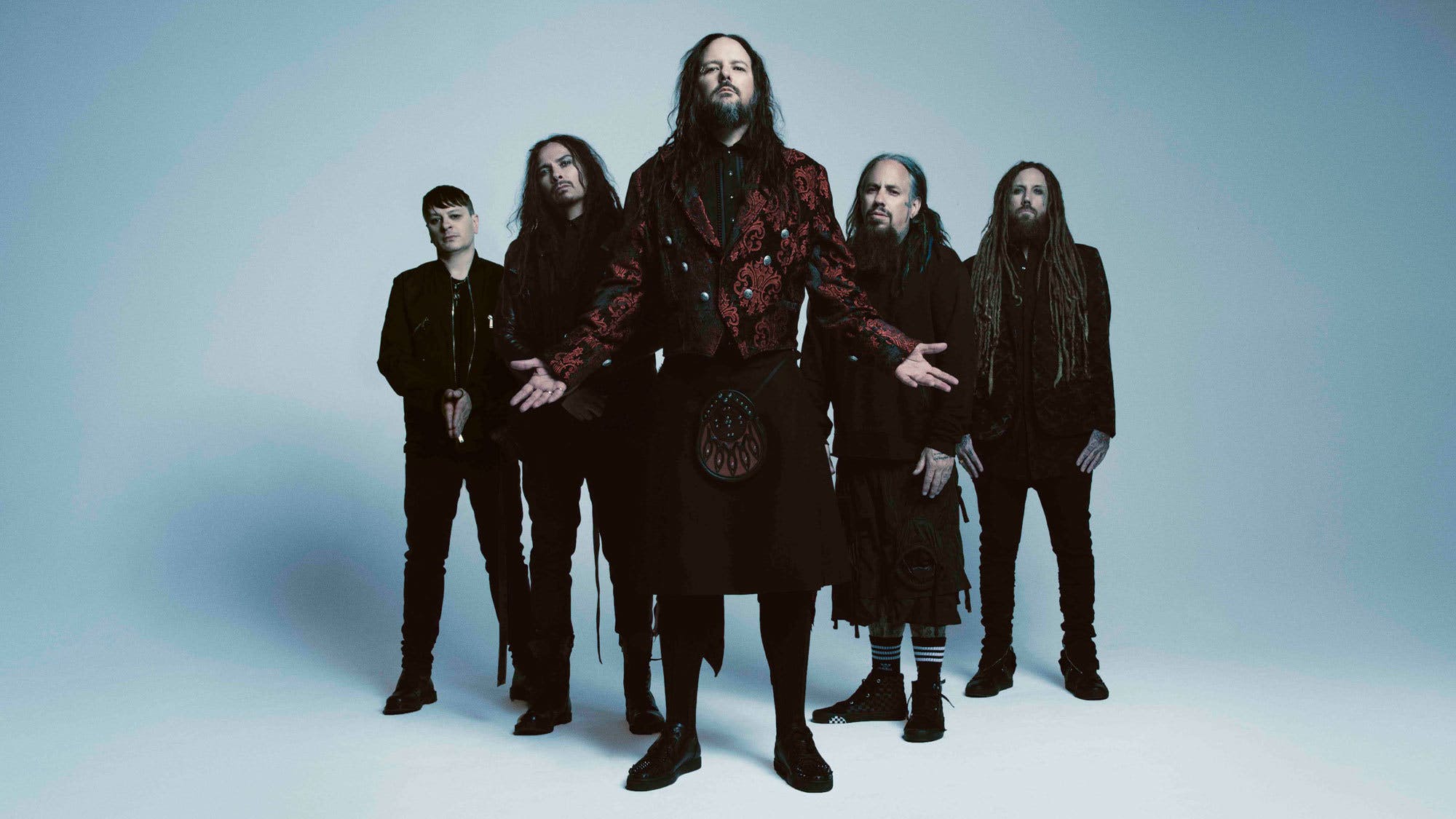 Clearly, 2019 is the year of massive metal comebacks. First German industrial kings Rammstein unveiled their untitled new record, while fellow heavyweights Tool and Slipknot have albums scheduled for release in August. Now, Bakersfield titans Korn are getting in on the action, returning with highly-anticipated full-length The Nothing – due out September 13 via Roadrunner Records.

The follow-up to 2016’s The Serenity Of Suffering, this is somehow Korn’s 13th album in 25 years, which is truly an astonishing work-rate from the nu-metal veterans. And while each of their records is underpinned by a certain amount of pain and gloom, The Nothing is by far the darkest record Korn have ever produced, arriving after the worst period in frontman Jonathan Davis’ life.

A record born from immeasurable heartache and anger following the death of the vocalist’s 39-year-old wife Deven in August, it’s an intentionally uncomfortable listen, glued together with agonising interludes and tales of loss. It’s not an easy ride, but one we’ll all have to take sometime. Jonathan explains more…

What vision did you have in mind when you started work on The Nothing?
“I was dealing with all the darkness that was around me. Life has been very dark, so it was just me going through the grieving process with losing my wife. It was hard. I haven’t had a chance to reach my full potential on Korn records for years, because I’ve always been so busy with stuff at home – taking care of my son Zeppelin, who’s got type 1 diabetes, and Deven had really bad mental illness that I was hiding and dealing with. I did the best I could, but I never could put myself 100 per cent into [recording]. Sitting down and working out what I was going to do with this record was a process, and this is the longest I’ve ever taken making a record. I went through working with a producer, different engineers and shit, and I finally got fed up. I’m like, ‘Fuck you all, just leave me alone; when it’s done it’s done and I’ll give you it.’ So it was just me and an engineer. I did it myself and it was a very cathartic, dark experience.”

Where did the album title come from?
“I was struggling with the thing that’s chasing me – that’s always fucking with me. I tried to give it a name and it just fit. I know it’s from The NeverEnding Story – The Nothing was coming to destroy the fairytale land with Atreyu. I love that movie, but it was somewhere in between. The Nothing’s not necessarily evil evil – it’s a mixture, and I’m all about balance. In my house I’ve got crosses of Jesus everywhere and [deity] Baphomets everywhere – I’m in the middle, I’m Switzerland. I always thought there are two things I know for sure in the universe – there’s a positive and a negative. I tend to be intrigued more by the dark side – I’ve collected a lot of dark things, seen some crazy shit – but when all that shit went down with Deven and my son, it seemed like the powers that be were keeping me from making the record. I sound crazy when I talk about it, but one thing after another would happen – my mics would break, stuff at the studio would break, things would happen at home… Whatever it was, it was keeping me from doing what I was doing. It’s always been the case with me.”

How would you say The Nothing differs from your last album, 2016’s The Serenity Of Suffering?
“It’s just a completely different beast. Musically, I think it’s leaps and bounds from that. The guys had fun working with [producer] Nick Raskulinecz again, but you could tell my level of involvement from that to that. I mean, shit, on this record there’s some songs that’ve got 20-something vocal tracks on it – I went full-on Queen and ELO [Electric Light Orchestra]! They were some of my influences and I wanted to do some of those big vocal beds. I took my time; I was really into making the vocals sound amazing. I did all kinds of recording shit that I learned over the years, so this wasn’t a week like the last record.”

Was everyone on board with the longer working process and your experimentations?
“I’ve got the best band in the world! Those guys, whatever I need, they’re my brothers, and I love them to death. They just wanted the best, wanted me to be comfortable – obviously what I’m going through I had to do what I had to do. I went to Nashville where they were recording with Nick and we did a couple of songs together, and they came back to LA and did a couple of songs there. The song Finally Free we did in LA, and it was originally called Raped At Paramount.”

Why?
“We were [working] at Paramount Studios, I go home, and overnight the people working there got all fucked up and went into the studio and busted one of [guitarist Brian ‘Head’ Welch] Head’s guitars, strung our gear everywhere, and we came up with that name. You get your shit fucked with and it’s like being raped – that’s where that title came from. We made that motherfucker come back and face the band. I wasn’t there and my band’s more lenient than me, but I would have gotten up in that motherfucker’s face. The band were like, ‘We’ve all been drunk and done stupid shit,’ but I would have scared the fuck outta him – touch my shit and I’ll fuck you up. That song was one of the first songs I really got into and it was more about me losing Deven. That was a hard one.”

Why did you choose You’ll Never Find Me as the lead single?
“Who fucking knows? (Laughs) This is our 13th record; managers find their favourite and go with that one. I love it all as a body of work, I don’t really care anymore, and we’ve done it so long… I think it’s more of an evolution for the band. I keep hearing that it’s more mature and this and that, but I don’t know what the fuck that means. Are we older? How does it sound more polished and mature? But whatever. Everyone was freaking out over that song, so it became the single.”

Is it almost a concept album?
“It’s not like [Pink Floyd’s] The Wall or some shit like that, but it’s me dealing with those things I’ve gone through. There’s a lyric in there that really resonates with me on the record. It’s, ‘For every good thing I’ve done in life, there’s a price to pay.’ And it seems that for people who do a lot of good in the world, there’s a price for doing that. You can be slapped with fucking bad shit.”

Have you always been a big believer in karma, then?
“Definitely. How can you not? I see it all the time. I think there’s a natural equaliser in the universe. I try to stay neutral, in balance, but it’s hard to do. That’s how I’ve lived my life for a while.”

What was it like working with Nick again?
“Nick is great with the band, but I didn’t work with Nick. He’s good with them and I love him to death, but I didn’t vibe with him and I never really did. I don’t think I’ve ever vibed with anybody (laughs). I did my own thing because I know myself better than anyone. I have engineers that I work with who know me really well, and it’s just better for me that I did this one by myself.”

It must have been quite isolating working alone, though?
“I’ve been doing that for the past couple of records. I have a studio in Bakersfield. The rest of the guys are wherever they’re at, but I hole up in my studio and do that. It’s just the way it is now. Back in the day we’d all get together, but we’ve all got families and lives, and it’s so hectic. With every Korn album, the music’s done before I even touch anything. It was better for me to do it like that. They had to go to Nashville because that’s where Nick does his records, but I was like, ‘Fuck that, I’ve got kids, I’m cool here.’ I’d upload my vocals to a server, he’d get ’em and place ’em in. He works great with the band and gets those guys pumped up to make some great music, then it’s up to me to make this canvas fit together and work.”

Did the music and lyrics come quite naturally?
“I’ve never hurt like that ever, but when you’re hurting like that shit just comes out. It wasn’t going to be an album necessarily about, ‘Oh, woe is me.’ This whole [record] is about this dark thing. I’m not going to say demons or devils or whatever the fuck it is, but this dark energy has chased me for so long. It’s just me dealing with it and talking about it, and I’ve always felt comfortable there. Why in my life have I had so much fucking heartache? Why do I always get dealt the things I get dealt? That’s me dealing with it.”

The artwork is very different to what you’ve done in the past…
“I was really apprehensive about it; I thought it was going to be stupid and they’re not going to get what the fuck I’m going through. I usually find artists that I like and give them lyrics and have them go at it, but these guys put together a whole production. We’re working with new managers and we’ve never had this level of management since back in the day, and they came with a whole presentation of artwork, and the first time I saw it I was like, ‘That’s it. That’s what I felt like.’ That’s the darkness all around us. That fucker’s hanging, suspended, and when you look at those tangled cables doesn’t it give you that fucked-up feeling? It captured what I was feeling, it captured the vibe of the record, and it’s brilliant. I need it to hit you in the head and make you feel something. It’s a metaphor for that energy and uncomfortableness in my skin at the time.”

Korn's new album The Nothing will be released on September 13 via Roadrunner Records.