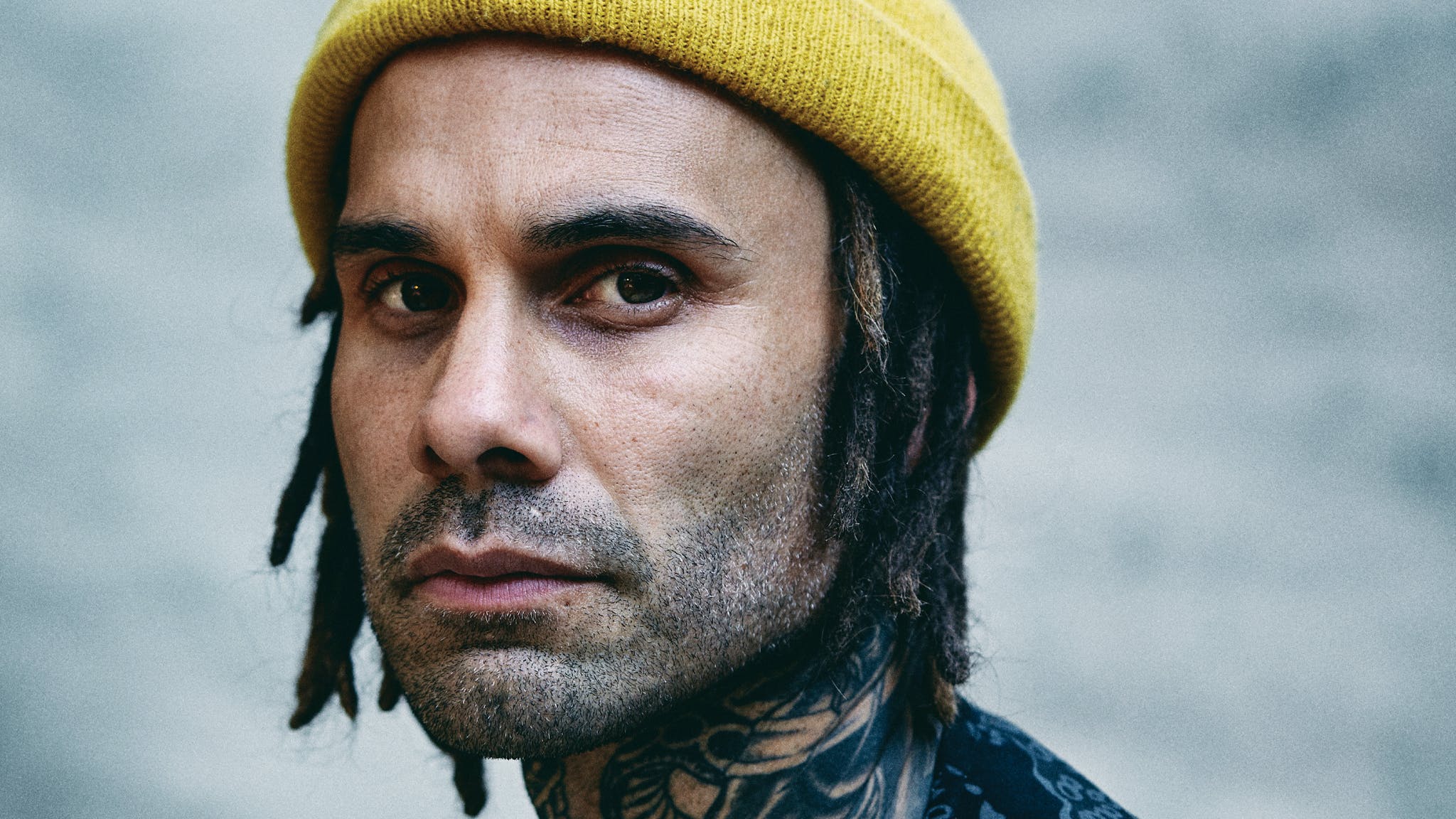 There was a moment when it felt like things might actually, finally, change. In the wake of George Floyd’s murder by Minneapolis police officer Derek Chauvin on May 25, 2020, citizens across the USA – and soon the whole world – rose up to protest police brutality. As the Black Lives Matter movement grew substantially, there were both peaceful marches and violent riots, the latter often instigated by the police. But so palpable and electric was the anger in the air that it finally seemed like the racist, unfairly capitalist power structures that have defined America since its inception might be about to crumble.

Jason Aalon Butler felt it, too. For 13 straight days, the FEVER 333 frontman was front and centre at the protests in his hometown of Los Angeles. He’d take to the streets by day with his wife and eldest son, then two-and-a-half, before heading without them to what he calls the “evening rebellions” at night. Then, the atmosphere felt more threatening, thanks to a heavily militarised police force using heavy-handed tactics to quell the civil unrest that had understandably taken hold.

Months later, when the dust finally settled, nothing had fundamentally changed. But Jason channelled his experiences into FEVER 333’s WRONG GENERATION, a brutal eight-track EP that not only captured the turbulence and hope of that first fortnight of protests, but which also examined the systemic issues and obstacles that Black Americans have encountered, and continue to encounter, every day of their lives.

Some two years on, speaking from his home in LA, Jason is in a reflective mood when recalling the response to, and effect of, those eight songs.

“I’m extremely grateful, appreciative and happy about it,” he says. “But to be completely honest, on a subject level, a cultural level, and a level of deliverance of what I think needs to happen, it’s not enough. I still find myself battling with the industry on what black and brown and non-white people deserve in this industry, especially in terms of reparations and the larger systemic issues. And I cannot forfeit what I believe is the most important thing to do, which is to at the very least talk about it. Most importantly, I need to continue to be about it.”

Jason’s drive, desire and sense of necessity not to just comment on what he thinks is wrong but actively try to change it has led FEVER 333 to what is a new chapter of the band’s career. Completed live by guitarist Steve Harrison and drummer Aric Improta, and consisting of a whole host of cohorts when it comes to writing and recording (including John Feldmann and blink-182’s Travis Barker), FEVER 333 were signed to Roadrunner after forming in 2017. The deal came in part thanks to the success Jason had achieved with letlive., his previous band. That outfit essentially came to its end because of internal disputes about Jason’s ever more radical, left-wing political stance, and his increasingly uncompromising message, as a mixed race man, when it came to issues of race.

Although Roadrunner afforded Jason the freedom to say whatever he wanted, the frontman felt it wasn’t enough. And so, 2022 finds the band branching out on their own, having become fully independent and autonomous in order to merge their art and their activism. Jason doesn’t just want FEVER 333 to talk the talk, you see. He wants them to walk the walk. And while the 36-year-old expresses sincere gratitude and love for FEVER’s team at Roadrunner, he’s also not shy about explaining why the band left the label.

“All love to them, for real,” he states, “but when it came down to what I was saying and how I was saying it, there was dissonance. And what I realised as I started to dive further into my leftist learnings, is that we’re dealing with corporations that only give a fuck about the bottom dollar. I’m not saying that about the people on our team, I’m saying that the fucking Money God they answer to is a corporation, and these motherfuckers are always going to be on top. They ain’t never going to let you be on top of that dollar – even if you made all that money, even if your labour is what brought that. You’re propping up that system no matter what. They’re literally making money off of your fucking protest.”

Not being shackled to a corporation, then, means FEVER 333 can, to put it bluntly, do whatever the fuck they want. They might not have the backing of a multi-million dollar company now, but they have total freedom. Not that this completely means there’s no resistance.

“I one thousand per cent feel external forces trying to silence it,” says Jason, “or find a way to cut it off at the legs, or blackball me, or stop me all the fucking time. Sometimes, it’s even people close to me who are like, ‘Yo, this is too far.’ And I don’t mean to further frustrate those people, but that’s how I know that I’m doing the right thing. Because when people are afraid, it means that something’s about to happen – or that it’s possible. This thing is possible.”

That ‘thing’ is the battle that Jason is fighting on two fronts, firstly with a brand-new FEVER 333 album – the name of which he divulges to Kerrang! on the condition it remains a secret – and secondly with 333 Wreckords Crew. It’s through that artist-oriented collective he founded in 2019 that the new FEVER record will be released, but it’s about much more than just his band. The 333 Wrecks roster also includes Oxymorrons, Twice Born, Guerilla Warfare and Jason’s wife, Gin Wigmore. Ultimately, he hopes to create a bigger – and fairer – space for minority artists within the mechanisms of alternative culture, because they’re traditionally as underpaid as they are under-represented. It’s something Jason is very aware is going to be incredibly difficult.

“There will be turbulence and it will be tumultuous for me to get there,” he admits. “But if I have to lose money, if I have to put deals up that are so bad on my side sometimes, I will do that. I will eat that shit in order to create a better situation, so that eventually the industry is going to have to see that there’s a new bar that’s being set for BIPOC people in rock and alternative music.”

For Jason, it’s not just a worthy fight, but a personal one as well. Having seen the way his father – Aalon Butler, who fronted the soul band Aalon – was treated so badly by the music industry, he is determined to help others avoid the same pitfalls.

“I can tell you with all my heart,” he declares with an obvious, burning passion, “that everything I do from this moment on – everything – is just an effort to try to give ownership or empower other people. Especially coming from nothing. Like, being so broke and being homeless as a child and shit, because my father got so fucking screwed by the music business as a black man. My goal is to try to find ways to empower people and give them a type of ownership that they didn’t know was possible.”

That, of course, is directly tied to a much bigger beast: the oppressive capitalist system against which Jason is actively waging a war. It’s a system that, by its inherent nature – limitless growth from finite resources – is completely unsustainable. It’s also causing the destruction of the planet, something we’ve been witnessing more and more in real time in recent years.

That’s something that’s been on Jason’s conscience so much that there’s one song on the new record that’s “directly about climate change, asking yourself as a parent, ‘How would you feel if you could live to see your children inherit a world that’s falling apart and know that you didn’t do anything about it?’”

For Jason, the key to all of it is understanding how interconnected everything is – that climate change and capitalism and music industry bias and systemic racism and white supremacy and police brutality are all products of capitalism. It’s why Jason has spent so much time railing against those power structures, and why he’s doubling down his efforts to do so.

With FEVER 333 and 333 Wrecks, he hopes to upend the hierarchy of the music industry, while as a parent, he wants to overthrow the whole system so that there’s actually a world left for his children to enjoy. It’s a very tall order, and one that at times feels futile, but he’s not backing down.

“This all sits on the fucking footing and pillars of a very racist and capitalist system,” Jason says. “And they’re intertwined. It’s not like we have capitalism over here and white supremacy over here and tilted policy over here. They’re all the same thing. And I don’t think a successful bridge that we can cross has been built yet, because we’ve created this enemy that we’re not willing to fight. But the one thing that kept giving me inspiration to continue trying for this fight was knowing that maybe, just maybe, there’s other parents out there having the same conversation. I teach my children about consumerism, about overconsumption, about – in a very, very, very low level – Marxism. And at the end of the day, when I’m teaching them, I realise how simple it can be. Everybody deserves to be housed, everybody deserves to be cared for, and everybody deserves an opportunity to fit somewhere.”

While those are the values he wants to instil in his children, it’s also what he wants those who listen to and go see FEVER 333 live to understand. Because against all odds, Jason – vehemently recalcitrant and anti-establishment – has infiltrated the industry in a way that he wasn’t supposed to. And, because he actually practices what he preaches, he’s now using his platform to try to affect change on a systemic level, both within the music industry and beyond.

“Because I’m light skinned, I think this industry was like, ‘Oh, well, we’re in this time of change and he’s a little bit lighter and he could speak to black people and white people,’” he says. “They thought I was a safer bet, and so this industry took a little gamble on me. And then when they saw they couldn’t control my ass, they was like, ‘Oh, no…’ They wanted to try to Elvis me, and they’re going to try to Elvis a bunch of us – take what we did and put in white face. But we’re not going to let that happen.”

Then, the final word.