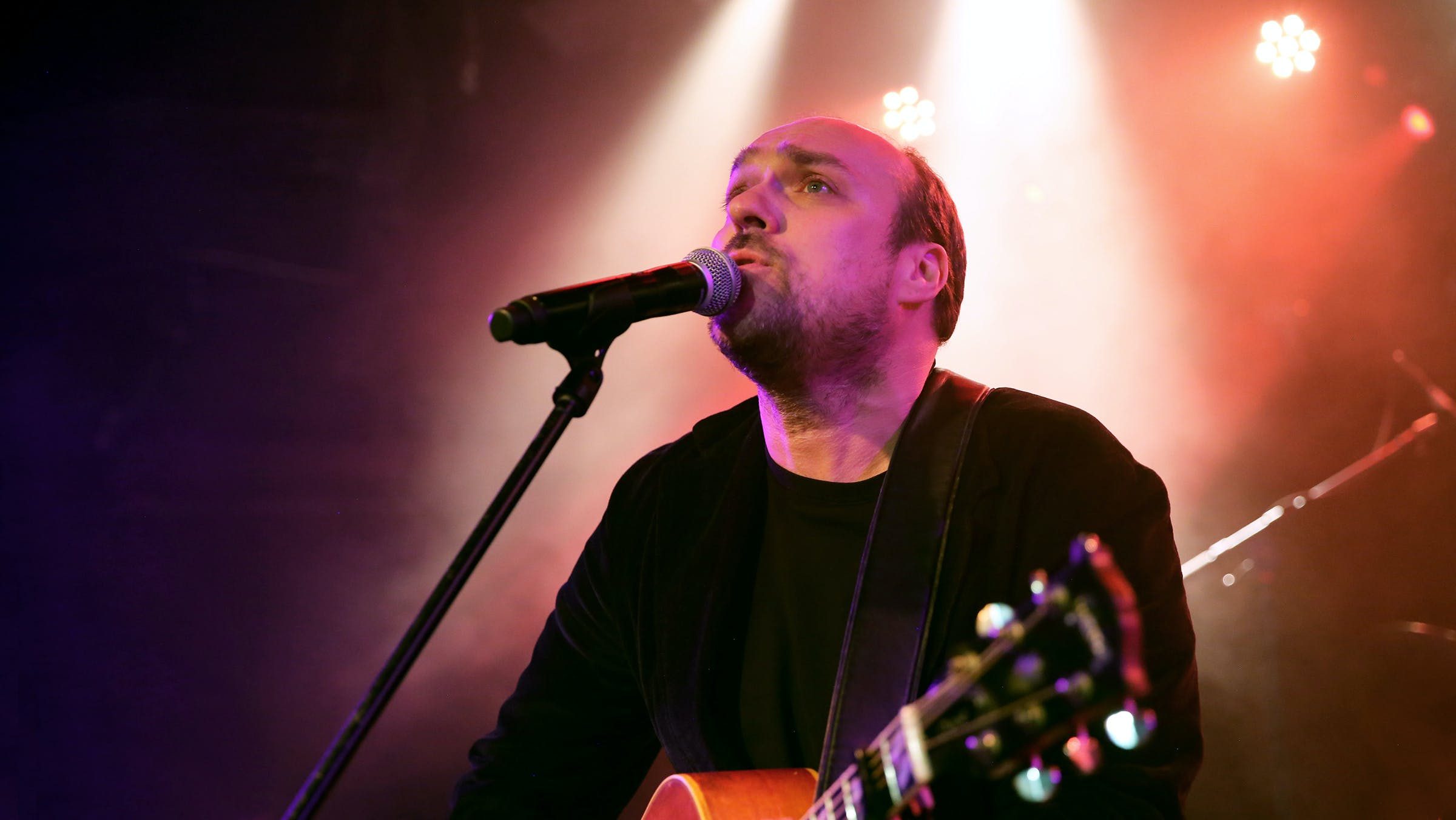 Jeremy Enigk is haunted by ghosts. They're not all bad – some are quite friendly, in fact. And by talking to him backstage before his most recent performance at New York City’s Le Poisson Rouge, one thing is for sure: he is at peace with all of them.

The former frontman of seminal post-hardcore band Sunny Day Real Estate – often cited as inspiring an entire modern “emo” movement, a credit Jeremy has seemingly come to reluctantly accept – has parlayed a career as an enigmatic, brooding rock star into one as an accessible, demonstrative singer-songwriter. It’s a transition most hardcore, metal, or alt-rock musicians are unable to successfully make as they age, but Jeremy has done so with grace and beauty.

While Sunny Day’s infamously difficult history of stop-start reunions and conflicting personalities may come with bittersweet baggage, Enigk can have no conflicting feelings about his triumphant debut solo record, Return of the Frog Queen. Inspired by a wide range of musical influences -- from Beethoven and Mozart to the Harry Nilsson-composed soundtrack for the film Popeye -- the dynamic, baroque collection of alternatingly hushed and sweepingly dramatic chamber pop songs features a 21-piece orchestra to create a wondrous soundscape found on no other album before or after it.

“There’s just something magical and fantastic about that record,” Jeremy admits between sips of a Corona in his dressing room. “It’s just so on point, and to me it’s a time in my life that is the essence of myself and the things that I wanted to do. It’s probably my masterpiece, if you will.”

To celebrate its 2018 reissue, Jeremy toured on the album following a brief acoustic living room tour. Now, two years after its release in 2017, he is finally giving his fifth full-length release, Ghosts, the proper full-band treatment on the road. And by doing so, he’s addressing his past in songs that he’d written over the last eight years since his previous album, 2009’s OK Bear.

“I was reflecting on my life for the last 20, 25 years,” he says, “and all the choices I’ve made and where they’ve taken me. Good and bad. And a lot of bad. And you get to a certain age where…you look back, and you’re like, ‘What have I created? What have I done?’ So all of those memories – good and bad – are the ghosts. They’re the things I was wrestling with, and trying to confront…[while] examining the future and where I wanted to take my life now that I’m almost middle-aged. How can I become a better person? How can I do things that make me happy, and also create opportunity for others?”

For an artist previously known amongst journalists as notoriously unapproachable, he’s granting a refreshingly honest and openly introspective chat that would have been rare – if not impossible – for a younger Jeremy in the late ‘90s.

“Back then, it was just a chronic shyness,” he explains. “I’m still a shy person, but I’ve [developed] a sense of humor about things and am a little bit more open. Drinking beer is really helpful on that level, too,” he says with a laugh, gesturing towards his Corona.

Bringing him closer to writers and fans alike is the fact that Jeremy has been his own tour manager, publicist, and record label for the last three years. Ghosts was crowdfunded via Pledgemusic, an endeavor he’d be open to repeating in the future – even if it does mean mailing individual albums out to his listeners.

“It was difficult,” he recalls. “I sent all of the vinyl, the posters, everything myself. I packed it. And I’m the one who made the errors when I sent a bunch of vinyl that got destroyed because I didn’t do it right. So I sent a lot back to people who said, ‘Can you send me more?’"

So why go to all of the trouble?

“I’ve had the managers; I’ve had the labels. I’ve put my career into other people’s hands, and I have nothing to show for it…financially. It’s not that other people weren’t doing an amazing job. My career is based off of the help of other people, but now I want to have a little bit more control and understanding of the business side and be a part of it.

“Sunny Day, notoriously would just do whatever,” he continues. “We just let people take control of it…but we need to be smarter about it, and really make it something that can flourish and give back so you can continue to do it.”

Now that he has a better understanding of how every part of the industry works, he’s ready to delegate a bit once again. “I’m starting to get to the point where I need a tour manager,” he concedes. “It’s something that’s worth a percentage of the money I’m making. It’s control, and learning to relinquish the control where it’s [necessary].”

Doing so will, of course, allow him to focus more purely on the most important part of his career: the music. And although the legacy of Sunny Day Real Estate will always follow him, he embraces his past while wholly nurturing his growth as a solo artist.

“It’s something that I deal with every record: trying to represent where you’re at now,” he says. “And I think as an artist, the best thing that you can do, is just to do what you’re doing. The people that support you are gonna be there. Even when Sunny Day Real Estate did How It Feels To Be Something On, we only played those [new] songs when we got back together. We were dealing with Diary and the Pink record, and we were like, ‘No, we want to do this.’”

When Jeremy Enigk finally hits the stage of Le Poisson Rouge with his three-piece backing band (Tomo Nakayama on guitar, and Nils Petersen and Pat Schowe of Rose Windows on bass and drums, respectively), he settles in at the mic by telling the crowd he’ll be playing songs from Ghosts. There’s still that shell of timidness surrounding the core of rocker ferocity for which he’s always been known, but he seems more comfortable than ever. And there’s a heartening energy coming right back to him: the crowd seems genuinely grateful to be in his presence. Whereas the end of a live song performance might typically be the appropriate time for an artist to thank their audience, Jeremy’s fans steal this opportunity when, after his playing Ancient Road, more than one person shouts “Thank you, Jeremy!”

The random “woos” and passionate howls continue throughout the night, with fans reacting, at times, to the mellowed-out performance as if they’re at a raucous hardcore show. There’s a glorious tension in Jeremy’s performance, too: he sounds like he always has, but with a calmness and control that has taken decades to build. Traces of the past linger: he still strains his neck and head towards the sky to sing, as if choking on the words he so inimitably croons. His back hunches as if the guitar is a built-in part of his body. And the tone and timbre of his voice is still as ethereal as ever – somehow otherworldly while simultaneously representative of all humankind.

But without any bandmates’ influence, and plenty more to say, he enunciates much more precisely now; his voice is less exasperated snarl and more a balance between sweetness and controlled fortitude. The self-proclaimed introvert no longer conveys pained distress on stage, but a confidence that’s downright inspiring. He is the same man he always was, but no longer hiding. He wants to be known; he is ready to be adored.

Making its way through Ghosts, the band gallops along to upbeat songs like Sacred Fire, and moves the crowd to slower tunes like The Long Wait Is Over. During Canons – a fan favorite originally from 2006’s World Waits – a middle-aged couple slow dances in the back of the room. At the same moment, a passionate dude in his 20s shoulders his way to the front of the stage as if he’s pushing into a mosh pit, just so he can shout every lyric at Jeremy -- his raised pointer finger punctuating every word.

But the perhaps the show’s most electric moment comes when least expected: With his band off stage, stripped down to just his acoustic guitar, Jeremy performs a solo version of Days Design, eventually building his manic strums to a fevered climax. The crowd goes bezerk; the energy is palpable.

"Here's a sad sounding song,” Jeremy had said earlier in the set, introducing a Ghosts track called Victory. “But it's actually hopeful. Don't be fooled.” In the closing chorus, he sings: “Victory is closer now / I’m letting go of you somehow / Wide awake and moving on / but you're going nowhere.” One can’t help but attribute these malleable lyrics to the context of his career: with Ghosts, Jeremy Enigk has come to terms with a powerful, lasting legacy in order to build towards creating his next great masterpiece.