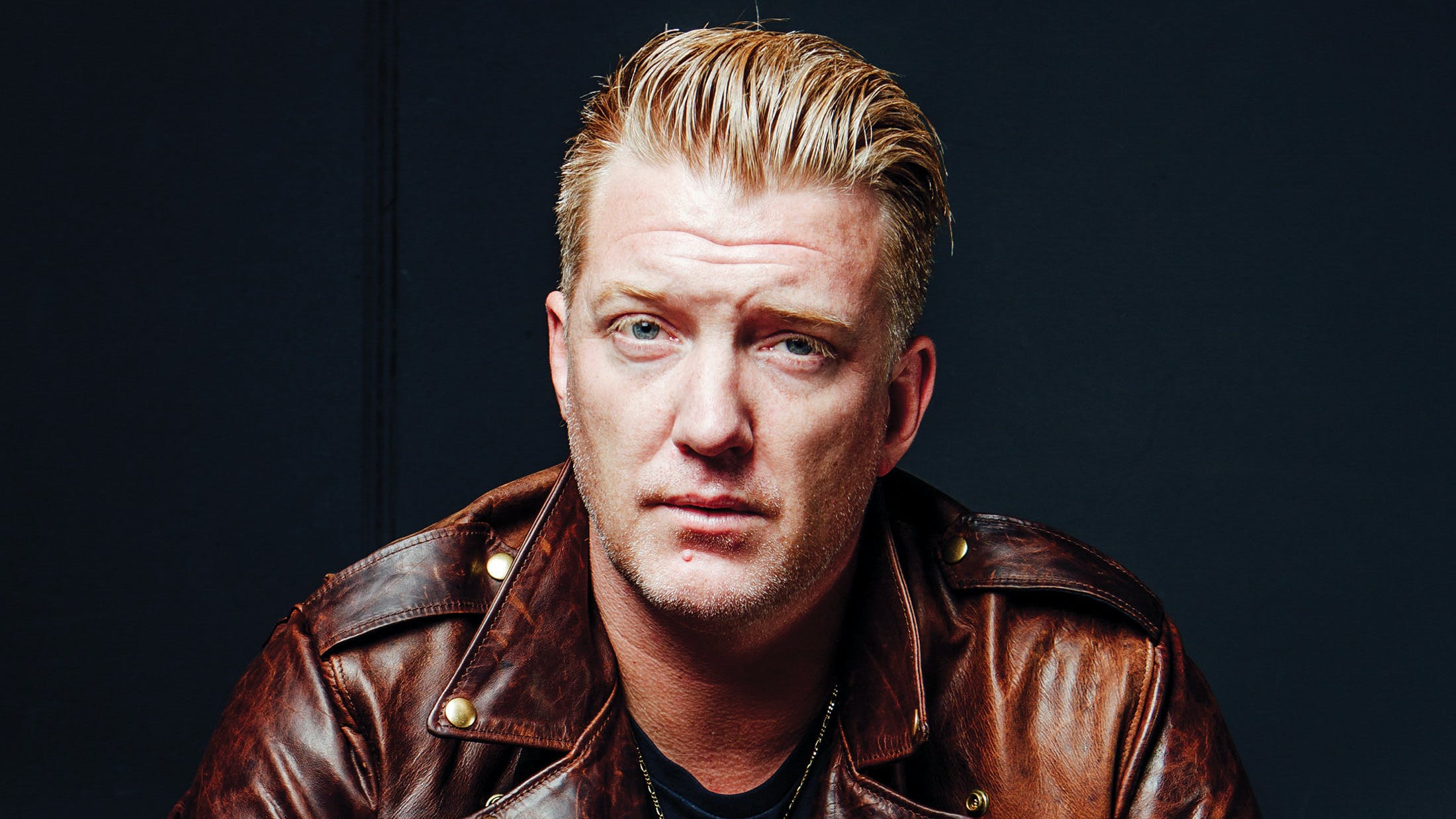 “Even Paul McCartney himself would have been grateful to come up with a song like No One Knows,” says BAFTA-winning actor and musician Matt Berry – the man who invited Josh Homme to cameo in his Channel 4 sitcom Toast Of London (more on which further below). “In terms of riff, melody and vocals, that song has it all and everything in between. It’s like a Beatles tune that finishes before you want it to, so you play it again and again. Some might say it’s the perfect Queens Of The Stone Age song, but actually No One Knows is a perfect song by anyone… just incredible.”

It’s not the only track penned by the QOTSA founder worthy of such high praise – from his early rumblings in stoner gods Kyuss through to the more eclectic experimentations of The Desert Sessions, Eagles Of Death Metal, Them Crooked Vultures and beyond, the Californian guitarist has set the benchmark for rock music time and time again. Here’s a look at the greatest moments across his genre-eclipsing career…

Starting Kyuss At The Age Of 14

To be fair, a lot of musicians start their first groups around that age. But in Josh’s case this wasn’t just any band – and the four albums that followed would epitomise the very movement of stoner rock, paving the path for behind-the-beat Sabbathian fuzz at a time when heavy sounds were more angular than ever. Initially calling themselves Katzenjammer (the German word for hangover) in 1987 before rebranding themselves Sons Of Kyuss and then scaling back further, the coupling of Josh’s punk sludge and singer John Garcia’s Danzig-rivalling, golden croon would become genre-defining in every sense. By the time they were recording their Sons Of Kyuss EP, the guitarist was only 16 years old.

Following 1991’s Wretch debut, the three Kyuss albums co-produced with Masters Of Reality stoner guru Chris Goss set the benchmark for psychedelic mastery and down-tuned heaviness. Truth be told, it’s incredibly hard to pick a favourite out of 1992 second full-length Blues For The Red Sun, its Welcome To Sky Valley follow-up two years later and final album …And The Circus Leaves Town. Each has its own individual merits.

The beginnings were humble indeed – the quartet performing at the desert parties which famously used gas generators for electricity, melting the minds of local crowds. By the end of 1993, however, they were touring with Metallica. Three years later and the band were no more. “Would we have bombed or stayed in the same place or enjoyed more success? I don’t know,” frontman John Garcia once told this writer. “It was a great ride, and a lot of good things came out of it – QOTSA, Them Crooked Vultures, The Desert Sessions, Brant Bjork, Mondo Generator, Slo Burn, Unida, Hermano. I’m just glad we’re all still friends.”

Deciding To Become A Frontman

After one EP and a split with Kyuss, QOTSA released their self-titled debut in 1998 with Josh now standing centre stage and handling lead vocal duties, as well as guitars. It was an incredibly brave move for the axeman, especially considering the album was written and recorded almost single-handedly, save for Alfredo Hernández’s drums tracks and a handful of overdubs. Songs like Regular John, If Only and You Would Know demonstrated the new, more direct approach in his creative endeavours.

While QOTSA’s debut proved the guitarist was more than capable of fronting his own band, it wasn’t until their second album, Rated R, where Josh began fully realising the sound they’d become known for. Dialling down the heavy sludge and fuzz in favour of syncopated polka rhythms and Stooges-y garage, tracks like Feel Good Hit Of The Summer and The Lost Art Of Keeping A Secret would help make way for mainstream success, with one-time Kyuss bassist Nick Oliveri now also in tow. Unlike its predecessor, the list of guest personnel was vast indeed – with Judas Priest’s Rob Halford, Scream/Goatsnake’s Peter Stahl and Screaming Trees’ Mark Lanegan and Barrett Martin being among the names lending a helping hand. These years also saw prolific output from Josh’s other project The Desert Sessions, recorded in a Joshua Tree ranch stacked full of vintage recording gear, working with names as highly esteemed as PJ Harvey and Soundgarden’s Ben Shepherd across 10 expansive and spontaneous albums.

Getting Tattooed To Commemorate His Worst Gig

After what QOTSA described as their “worst show ever” at Germany’s Rock Am Ring Festival in 2001, Josh – joined by Nick Oliveri, Mark Lanegan and soundman Hutch – got a tattoo that reads ‘Freitag 4:15’. Anyone that’s seen YouTube footage of their alleged mid-afternoon car-crash on the Centerstage may beg to differ, however – the band actually power through a series of technical glitches on commendable form.

The album that followed, 2002’s Songs For The Deaf, brought QOTSA’s biggest hit No One Knows – a single which still to this day transcends all notion of genre, instantly recognisable to virtually anyone with a working pair of ears. Other singles First It Giveth and Go With The Flow would also cement their path from underground heroes to one of the biggest rock bands on earth.

Starting A Supergroup With Dave Grohl And John Paul Jones

Rare is it for supergroups to actually live up to their promise as much as Them Crooked Vultures. Best of all, their collective noise married flavours of all the celebrated music they had behind them without feeling obvious or predictable. The 2009 album wasn’t the first time Josh Homme and Dave Grohl had collaborated – the Nirvana/Foo Fighters legend having joined QOTSA for the Songs For The Deaf album and tour, and neither would it be the last, Josh appearing on the Sound City: Real To Reel documentary and soundtrack.

His Cameo In Toast Of London

“We met over a decade ago,” remembers Matt Berry, speaking exclusively to K! about how the QOTSA legend ended up getting his nose sliced off by his sitcom’s lead character, Steven Toast. “What blew me away was not only is he a brilliant songwriter, guitarist and everything, but he actually knew everything I’d done when I met him. When that happens you don’t know what the fuck to do… it’s like, ‘Jesus!’ Anyone with any kind of taste will be a QOTSA fan, won’t they?! Especially if they play guitar or listen to rock music.”

“It all came about because I thought he’d be really funny in it – he’s from a completely different world that has nothing to do with London Theatreland. I knew he would stick out so extraordinarily… and he did! He was actually on tour at the time, needing to be at a venue around six, so I thought no way would it happen. You just don’t expect someone that big to get involved in niche British comedy, as such. It was a massive honour, one of those things that turned out very cool. We hang out a bit, whenever he’s in town we meet up and whenever I’m over there, I go and see him. I like to visit the studio and hear what he’s doing.”

Creating A Masterpiece In The Midst Of Depression

While there are certainly some magical moments on both 2005’s Lullabies To Paralyze and 2007’s Era Vulgaris, it was 2013’s …Like Clockwork that reinstated QOTSA as a band still with their best days in front of them. The music came during one of the darkest chapters of the QOTSA frontman’s life, following complications with surgery on his knee and bouts of depression during the recovery process. “I think I was just lost, looking for something in the dark… in that dark I found this record,” he noted, upon the release of the group’s sixth opus.

Teaming up with Mark Lanegan to create the music for celebrity chef/travel documentarian Anthony Bourdain’s Parts Unknown television series, the 40-second jingle kicking off each episode certainly captured its essence of unabashed adventurism. In the weeks following the Anthony’s death in 2018, Josh shared a hearfelt tribute alongside a letter the TV personality sent to his daughter, explaining why he’d once appeared angry with her father and how they were really the best of friends.

Enlisting one of the most in-demand pop producers in recent history for 2017’s Villains could be one of the most punk rock moves in Josh Homme’s career to date. His MO for album number seven was to write music that “made you want to dance” and on songs like Feet Don’t Fail Me, The Way You Used To Do and The Evil Has Landed that’s precisely what he achieved.

Making A Hit Album With His Hero Iggy Pop

Though he wasn’t there on the night, the traumatic events witnessed by his bandmates in Eagles Of Death Metal and those in attendance at Paris venue Le Bataclan on November 13, 2015 affected Josh Homme deeply. By his own admission, secretly co-writing, producing and performing on Iggy Pop’s Post Pop Depression, which came out the following year, is what helped him navigate through said tumultuous times. The gritty garage rock born out of these sessions was mutually beneficial and would end up being the Godfather Of Punk’s highest-charting solo record to date.

Even more unexpected than his stints in Toast Of London, Portlandia, Gutterdämmerung or American Dad! was Josh’s appearance on British children’s network CBeebies show Bedtime Stories in 2017. “Do you like dragons?” he asked, before reading Zog – the Julia Donaldson tale about “about a heroic and good dragon that is learning to be the best he can be.”