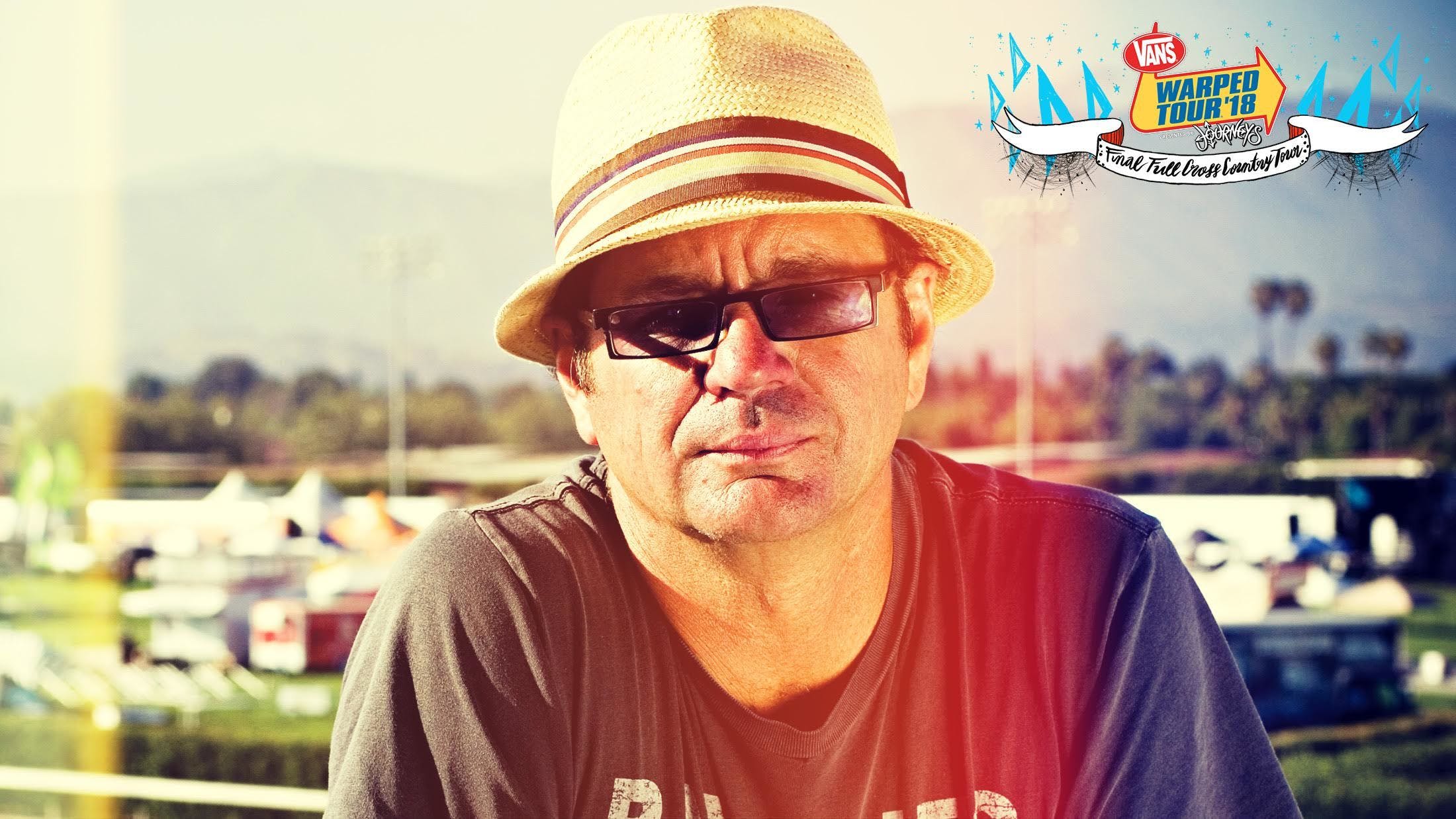 When Kevin Lyman assembled Warped Tour in 1995, it was only meant to be a one-off. Of course, it didn't quite pan out like that - Warped Tour became a central component in a lot of peoples' lives, a chance for at first punk bands and eventually all manner of alternative artists to hit the road for the summer and play to a big crowd of enthusiastic, open minded folks, and a cultural lifeline to armies of fans in parts of the US where major bands often didn't usually tour.

People were shocked, then, when Lyman announced in November last year that 2018’s edition of Warped would be travelling festivals last cross-country run across the USA. As he explains, he has his reasons for making his decision, but it also doesn’t mean that Warped is entirely dead and gone – the future may have some surprises in store, and its quarter century legacy will certainly remain in the minds and memories of anyone who ever went to it and every band who ever played it. We spoke to Kevin about the past, present and future of the tour.

How is this last ever cross-country Warped Tour run going?
Well, it might be our second biggest tour ever. Ticket sales have been crushing, basically. We’ve had shows that are up to 19,000 to 23,000 – you know, everyone’s coming out to say goodbye to Warped Tour.

Is that a bit bittersweet? Does it make you want to reconsider your decision?
No. There’s no reconsidering. We’ll do some stuff for the 25th anniversary next year – I’m working on those plans now – but this is definitely going to be the last cross-country tour.

Why did you decide to stop the cross-country tour?
Do you want all 21 reasons?! There are so many reasons. One if that I think I’ve done everything in the format that I can with this. I used to tour Warped Tour and, to be honest, it was fun to be out on the road for me. I’ve always run my shows 100% all-in. I’m not someone who sits around and lets everyone else do the work, so physically, it’s definitely kicking my ass in certain ways now to do this tour. Two, the changing landscape of the whole thing. This was built on a community. This was built when everyone co-operated, and bands and everyone worked hard to keep the scene strong, and I just feel like since the era of social media, things get fractured so quickly. People pass judgment online instead of meeting them face to face.

In the punk rock community that I was in, you met people and it’s amazing how much you can find you have in common with people if you take the time to talk to someone. So the community seems a little fractured at this point and, to be honest, I’m 100% tired of trying to be the guy who holds it together. And you start throwing in how in America we have new transportation laws, in the UK we’re all going through this whole new security process – and I don’t mind each individual piece of it, but combined, when you start putting it all together, the burden of putting together a cross-country, travelling festival on the road, it’s really, really tricky.

Luckily, we’re selling as many tickets as we are now, because now, out of the ticket price, you have to take out your Ticketmaster fees, your parking fees, the taxes – so you’re trying to make these tours run on less and less of the ticket price. Luckily, we’re having a great summer and the finances are shaking themselves all out for me. It’s good, and that definitely comes into consideration – you have to run a sound business.

Did you ever expect Warped to get as big as it got when you first started it?
No. It was supposed to be one year and done. Really, it was going to be some friends of mine – skateboarders and musicians – and we were going have a good summer and then I was going to go get a job. I’d already worked 13 years in the business, I was running 320 shows a years, so I had almost 13 years before I started the Warped Tour. It was going to be a one-time ‘Let’s go out and have some fun’ thing that turned into 24 years. Many of them were years I’ve been having fun and doing business and now the last few have been a lot of hard work.

There are probably many, but what are some of your fondest memories and proudest achievements of the Warped Tour? You’ve broken so many incredible bands…
I like some of the bands that have come back to play this last year with me. To watch bands like Reel Big Fish, who now have a career that’s over 20 years and Warped has been such a big part of sustaining them and bringing in new fans. And then I look at bands like Mayday Parade and The Maine that came back and they were bands who were out in the parking lot selling CDs at one point and now they’re playing on the main stage. But then I’m watching these younger bands – and I think I picked a great crop of them.

Yungblud from the UK – I know he has the talent. He’s in and out on the tour because his label thought there would be smarter things for him to do than all the Warped Tour, and now he’s going ‘Why wasn’t I doing the whole Warped Tour?’ because the kids are really responding to him. And of course I said ‘That would be my question’ but who’s to question the smarter people that run labels, you know? And Palaye Royale – watching them, watching Chase Atlantic, these young bands. Just now we had Story Untold open the main stage and there were a thousand kids watching. A few weeks ago they maybe played for a couple of hundred kids.

With that in mind, what do you think the consequences of Warped stopping are for these young bands?
And that’s the thing. Warped wasn’t supposed to become a crutch for development. I think labels, managers and agents – if their band didn’t get Warped, they didn’t know what to do with them. And now they’re going to have to figure it out. The burden is now on other people to figure this out. I love music, but I love all the non-profits I work with out here and I want to put my energy into them right now. I think my energy can be better used towards philanthropy and education. It’s more of a struggle now, and you don’t want to struggle with the business you love. You’re wrestling with something that has developed all these bands – it isn’t any different than before.

The biggest problem is bands now can’t make money on CDs like they used to so they’re pushed into situations where they’re having to tour all the time. There’s a lot of tours that go out right on top of Warped Tour and they’re not doing as well as Warped Tour but they’re pulling a few hundred people away from it each summer, each show. We used to be strong because we all believed – Brett Gurewitz from Epitaph summed it up one day the best. He said ‘We all get under the Warped Tour umbrella to keep out scene strong and then we fight it out in business later on.’

It’s interesting you talk about philanthropy, because Warped is so much more than just music. There’s a whole community aspect to it.
Right. I mean, our non-profits are signing up more kids than ever, and it’s kind of an undertone of American society – that the kids are waking up, that they’re going to have to get involved in their future, they’re going to have to take care of their community. They can sit at home and plat video games and let people like Donald Trump become our president. And you’re seeing an awakening in the UK right now, too.

It’s great that people have begun rallying against these forces, but did it really take this much of a shitshow to get there?
It did. And it’s really sad. I always believed the Warped Tour had a lot of that, but I couldn’t understand why, in the rest of the country, these kids were not waking up. But they are. And unfortunately it’s taken shootings and everything else for people to wake up, but the Warped Kids have always been a little tuned in. We do about half a million kids a summer, and 50,000 of them get involved with a non-profit or sign up for something and that’s pretty damn good.

That really is. So, this is the last cross-country run, and there’ll be a 25th anniversary event next year – will there be other things beyond that every so often just to keep the spirit of Warped alive?
I don’t know. We’ll see. That’s the coolest thing, I think. I just took a professorship at the University of Southern California so I’m going to do some teaching for a bit. And I owe my wife a summer vacation because we haven’t had one in 27 years, between Lollapalooza and Warped Tour. So we’ll put on these events and take it year by year. I feel like I’m lucky to be alive in some ways at 57, given the way that I’ve beaten the hell out of my body. My whole goal is to go home and finish a 10 week yoga class and get in shape!