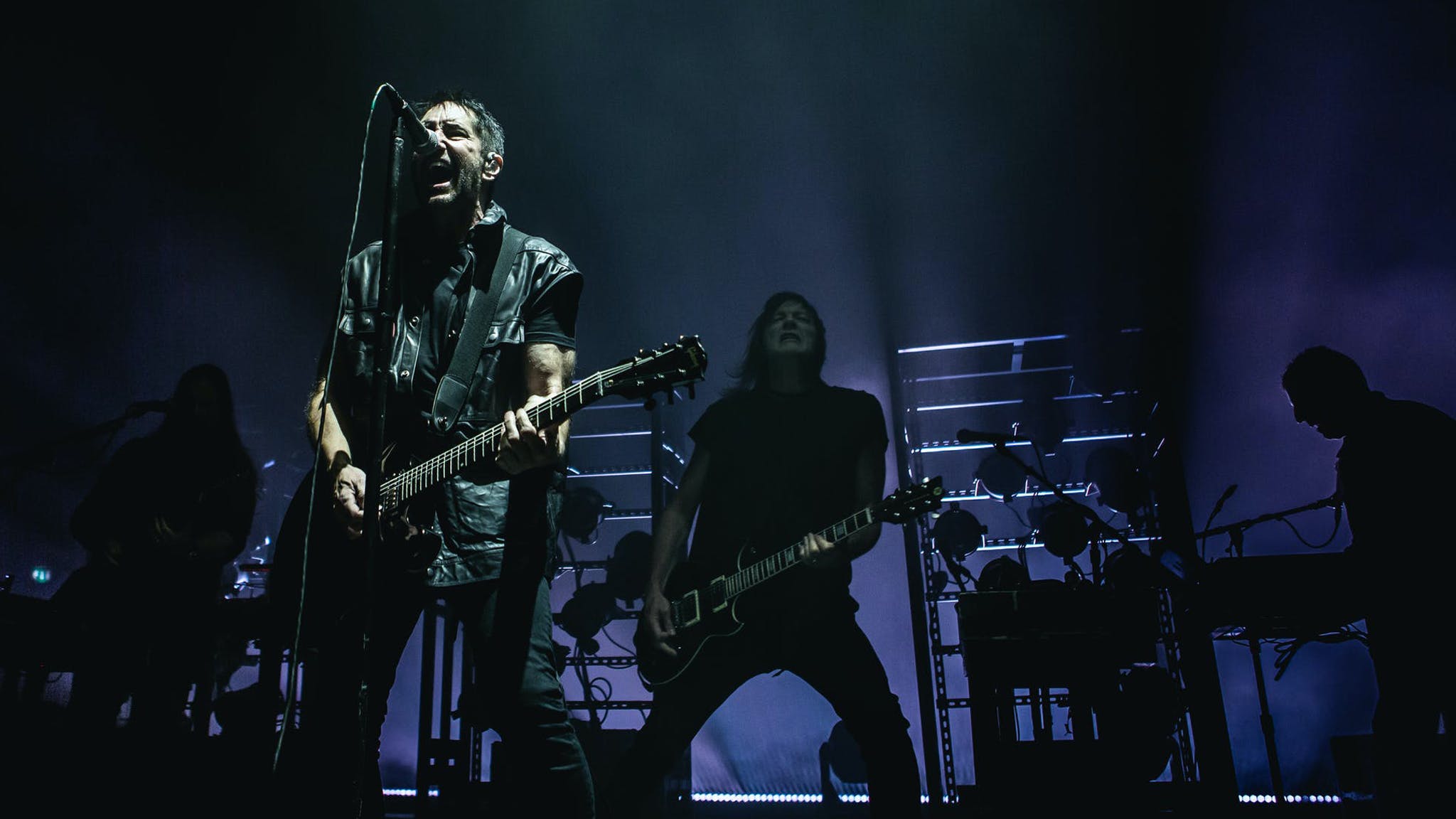 “It’s been a while,” says Trent Reznor, the back of a hand pressed against his glistening forehead, surveying this grand venue like a rogue general.

He’s right. Nine Inch Nails shows in the UK, to court a cliche, have been like buses: there were none for four years, then five came along at once – one in Glasgow, two at Cornwall’s Eden Project, one in Manchester last night, and this appointment in London at a venue they share a rich history with. In the throes of tube and rail strikes, of course, buses are one of the few ways to actually get here tonight, though from the look of a crowd that includes Tilda Swinton, Gary Numan and Justin Hawkins, few have let any impediment prevent them witnessing one of the year’s most exceptional gigs.

Those who arrive early enough catch the opening slot from Yves Tumor. The experimental performer and their band seem to pull in opposing directions, musically; Yves, the recording alias of Sean Bowie, opts for a sultry, artful delivery, while their accompanying guitarist seems to be doing an Eddie Van Halen impression. Both are interesting to watch, even if the sound quality does a disservice to the nuances of their collective efforts.

From the moment the sound of a paddle hitting flesh signals the start of Mr. Self Destruct, it’s clear Trent and co. are playing for keeps. Amid strobes that threaten to overwhelm the mind and the ear canal-scraping riff to The Downward Spiral’s opening track, there’s that brief, beautiful moment of calm. As an ambient drone engulfs, blue lights cut through the obligatory smoke to give the impression of being underwater, drowning, surrendering to your fate, before the cacophony pulls you back out. And that's just the first song.

One of Nine Inch Nails’ many gifts is their ability to constantly overhaul their set, allowing for markedly different experiences night after night. Indeed, looking at setlists from their UK shows so far and seeing the inclusion of Discipline and Happiness In Slavery on different nights, for the first time since 2009 and 1994 respectively, suggests all bets are off. Tonight we get the live debut of Sunspots from With Teeth, which while not necessarily occupying a prime spot on the wishlist of many, is a perfectly-curated moody addition.

If there’s a central tenet governing this performance, it’s unbridled intensity. Sometimes, as on the galloping Wish and the venomous Heresy, that intensity is musical. During Copy Of A, when darting lights project the band’s giant silhouettes onto the wall, it’s in the clever production. In the double-header of I’m Afraid Of Americans and Fashion, it’s their reverence for their fallen hero, David Bowie. Watching Robin Finck, who’s of the captivating school of guitarists who violently pulls sounds from his instrument, or Ilan Rubin, whose thunderous drum break during The Perfect Drug sets jaws agape, that intensity is in the performances.

And then there’s Trent, who unlike his creative partner Atticus Ross, is an untethered presence – dancing, goading, commanding – but most importantly of all, looking happier and more relaxed on a stage than he’s ever done before.

If there’s a grumble to be had, it’s that we only get one track from The Fragile. Trent mentions that Alan Moulder, the co-producer of NIN’s third album, is in attendance, so one might perhaps have expected it to be more generously represented – particularly when there are seven cuts from The Downward Spiral. Nevertheless, The Fragile’s sole ambassador, Even Deeper, sandwiched between Reptile and Hurt during the encore, proves a highlight.

“It’s been an honour,” smiles Trent towards the end, unsurprisingly thrilled to be back on the road and fully able to do what he’s done for 33 years. What’s more surprising is the modesty with which he addresses these fans, as if he, genius songwriter, producer, rock god, and two-time Oscar winner, is the lucky one in this equation. It’s great that he feels this way, because in the bargain, this audience gets to see a live band that, on form like this, is inarguably the best in the world. Bow down.