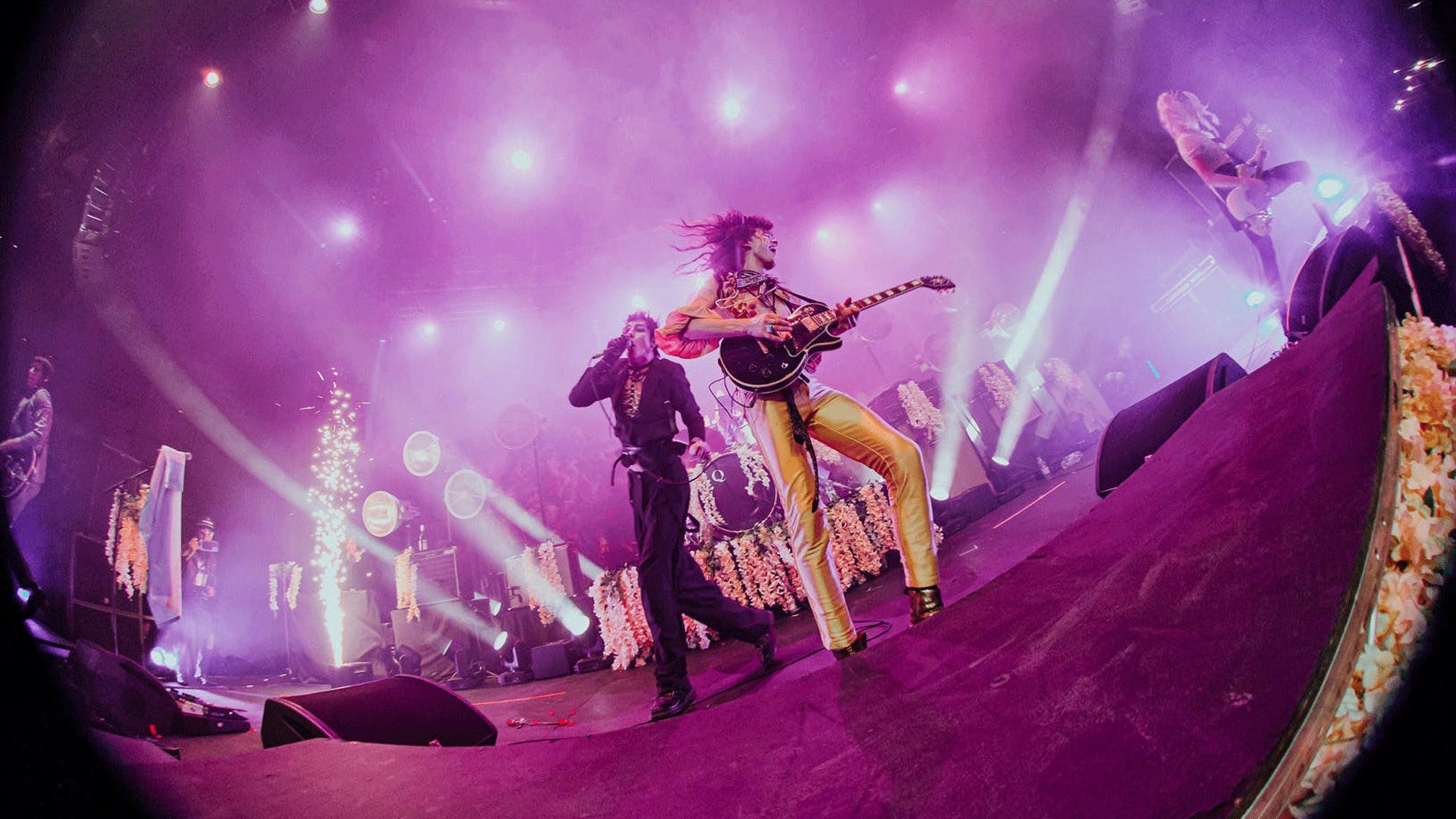 Five years ago, Palaye Royale played their first UK headline show in the Camden Assembly, just down the road from where they are now. That venue can hold a couple of hundred fans; the cavernous Roundhouse can accommodate just over 3,000. It’s no wonder frontman Remington Leith is bounding so keenly around the stage like he’s just inhaled some Haribos. “Holy fucking shit!” he yells as he surveys the mass of young punks (and a fair few older ones) before him with colourful hair and tartan clothes, for whom Camden would seem like a natural habitat.

As the Las Vegas band of brothers launch into thunderous, buzzing opener Nightmares, nearly the whole room is bouncing. They scream with glee when Remington throws water into the air as if it’s become holy just by virtue of it being his. Yet Palaye clearly love their fans back, as evidenced when they stop You’ll Be Fine midway through and bring the house lights back up to help a fan who’s in trouble down the front. They start the song again with a renewed fervour, making it sound gorgeously gargantuan in this big, wide space that they can call theirs for the night.

It's no surprise that Palaye Royale are showmen – with their bold fashion choices and take-no-prisoners attitude, you’d feel cheated if they weren’t. If there’s a criticism to be made, it’s a slight over-reliance on generic rock show staples – getting ‘whoa-ohs’ from the crowd, recycling Slipknot’s jump-the-fuck-up schtick during Get Higher, phones in the air for Dying In A Hot Tub in a moment that sadly never fully spreads its wings.

Everything changes, however, for (what seems like) the grand finale, with Remington appearing at a piano at the back of the venue, lit in a singular white spotlight, for the achingly vulnerable Lonely, leaving the almost silent crowd awestruck. He proceeds to climb up to the balcony and run around the seats while his brothers, guitarist Sebastian Danzig and drummer Emerson Barrett, take the song to the finish line in bombastic style. It's the big, unique moment the show needs.

Still, they’re not quite done. Before departing, Sebastian tells the crowd to wait outside for them in half an hour’s time. Band and fans reunite outside, with Remington sitting on a wall, mic in hand, for a traffic-stopping acoustic version of Ma Cherie that still feels intimate despite the number of people gathering in the road. They still offer to meet fans afterwards, no matter how long it takes to see them all, and although they could be spending an absurd amount of time in the still-chilly March night, it’s heartening to know that their love for their fans never falters.

It’s a lasting reminder that Palaye Royale are a band capable of truly special things when doing what they do best: being different.

Read this: Trench: The story of twenty one pilots’ most ambitious album ever

Palaye Royale have announced details of their fourth album Fever Dream, which is “very much about self-belief and self-empowerment”.