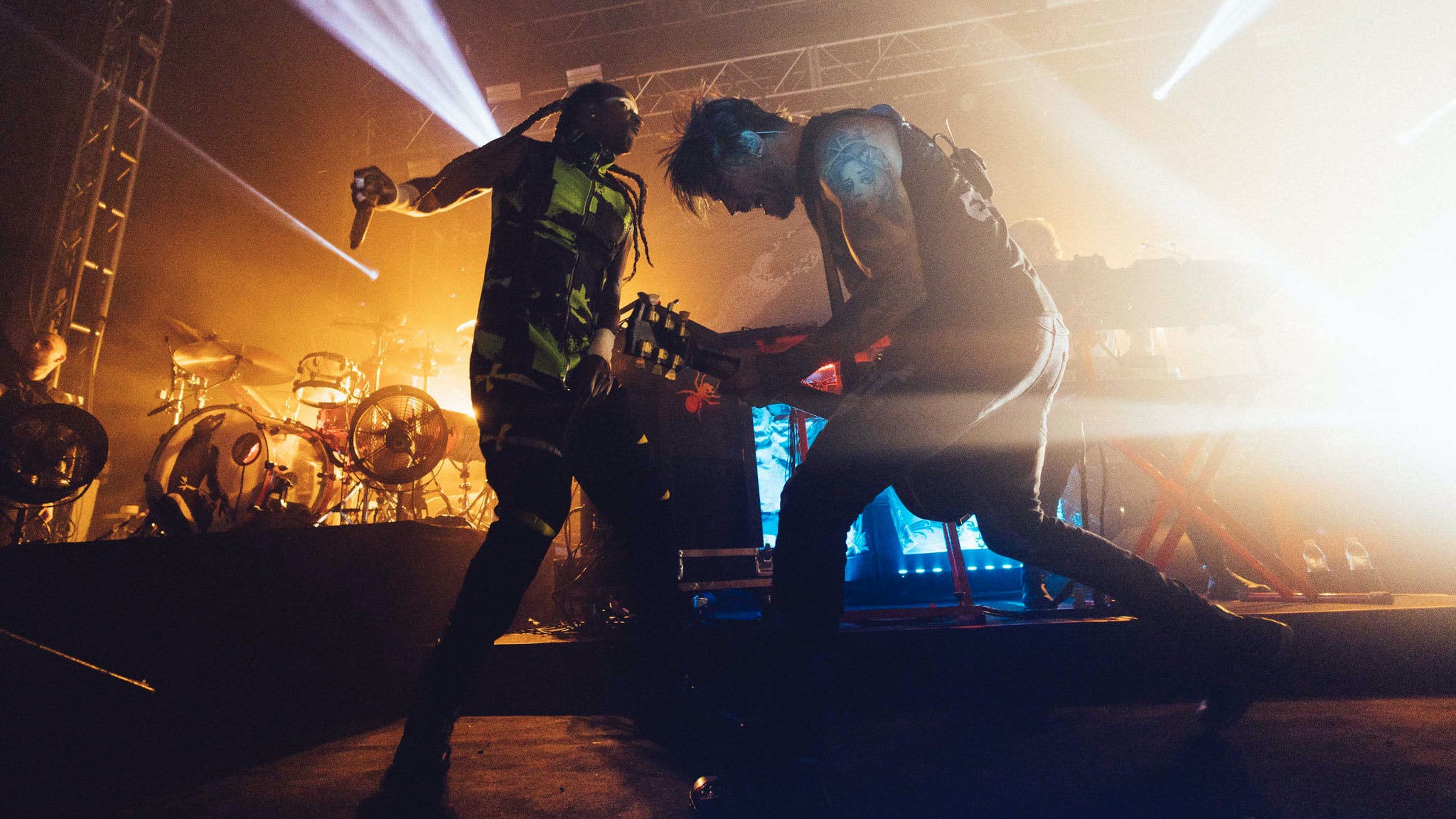 Released in 1996, Firestarter was the moment that catapulted The Prodigy from a cult clubland crossover to a globally renowned dance-rock monster and newfound terror of the tabloids. ‘Ban this sick fire record,’ the Mail On Sunday demanded after the song hit Number One and Keith Flint frightened children with his punk Pennywise antics on Top Of The Pops.

It was also the song that saw Keith promoted from his former background role as a dancer to one of the most suitably incendiary frontmen we’d ever seen. It’s fitting, then, that tonight’s rearranged version of Firestarter is delivered as an instrumental. Elsewhere, Maxim proves more than capable of fronting for two, but this is very much Keith’s song. He even makes an appearance of sorts; that instantly recognisable spiky-haired silhouette picked out in green lasers as the riffs and beats convolute. “We’re still here, he’s still fucking here!” declares Maxim as the entire crowd chants “Keith! Keith! Keith!” in unison.

It's a touching and spine-tingling moment that deals with the noticeably large gap onstage without any mawkish sentimentality. Liam Howlett has always been The Prodigy’s musical brain and Maxim added power and style, but Keith became both the heart and face of the band. His death in 2019 could have permanently derailed them, but it’s to the remaining members’ monumental credit – and, somewhere, Keith’s delight – that they’re returning now with a monstrous fire under their arses. It’s not that the frontman isn’t missed, because he absolutely is, but The Prodigy have never sounded better in any iteration.

The energy is off the scale from the moment they crank out the twangy riff and pulsing beat of Breathe, inviting the crowd to come play their game. And the crowd accepts – gladly. There is no calm space in this sold-out venue; no haven towards the back or sides for the safe nursing of an over-priced lager. The whole place is moving, jumping and sometimes gurning as the Prodge roll back the years. It’s easy to forget what a selection of bona fide big beat bangers they have at their disposal as the crowd sings along to everything – including iconic synth and guitar riffs when lacking in vocal hooks.

This tour coincides with the 25th anniversary of The Fat Of The Land and, while they haul out all the big hitters from that groundbreaking album, they also stud the set with gems from throughout their career. Their Law sounds absolutely massive, bolstered by live guitarist Rob Holliday, and is sadly no less relevant as, more than a quarter of a century on, another Tory government has just passed laws impacting the rights to protest. No Good (Start The Dance) causes a minor frenzy and Smack My Bitch Up turns the dial to positive mayhem.

The encore tumbles towards the present via Take Me To The Hospital and a huge, kettledrum-fuelled Invaders Must Die before We Live Forever brings things almost to a close with an entirely suitable sentiment and high-energy shakedown. That only leaves a truncated Out Of Space to bring things to a sweat-soaked conclusion. It’s a performance that feels like both a tribute to the past and a promise of the future – hopefully there will be much more to come.