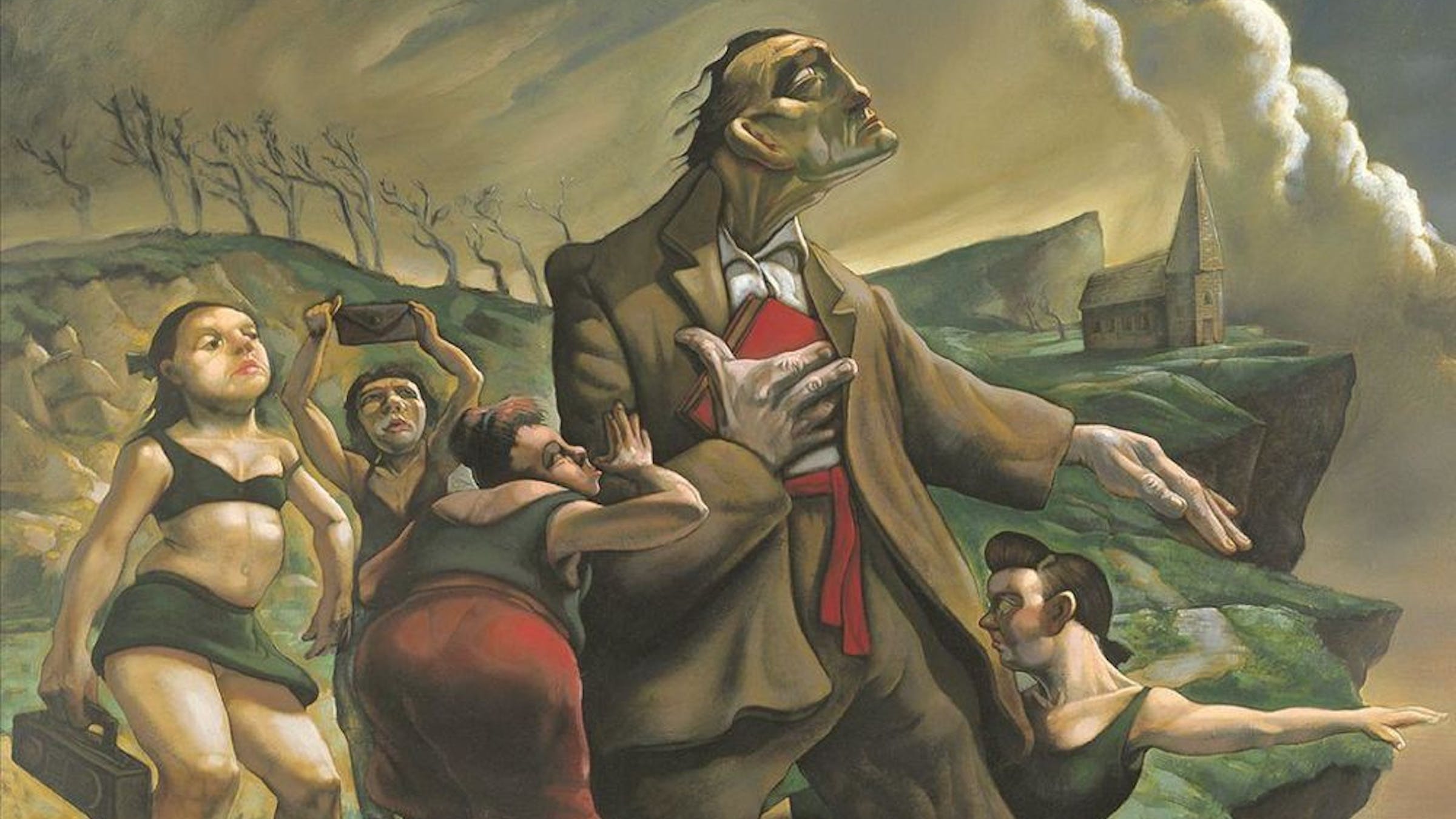 For children of the Nineties, Live’s Throwing Copper was inescapable. The sophomore album by the York, Pennsylvania, alt-rock quartet dropped in 1994 and hit American radio like a tidal wave, walking a perfect line between soulful and tough. The record’s four huge singles -- I Alone, All Over You, Selling The Drama, and the unstoppably memorable Lightning Crashes -- were ever-present on any rock station across the globe after that, perfect grassfed alternatives for fans who found Nirvana and the Smashing Pumpkins a little too acerbic. Chances are, if you mention Lightning Crashes in a room full of people, a handful of them will know every word of it, and will immediately sing it back to you in Ed Kowalczyk’s rust-belt warble.

“People do that to me all the time in bars,” says Ed with a laugh. “It’s funny, [Live guitarist] Chad Taylor shared a post with me on Instagram of this guy all the way in Jakarta, Indonesia, with his guitar, singing Lightning Crashes and just rocking it out. It’s been twenty-five year, and it never gets old. One of the cool things is the connections. I became friends with Corey Taylor when he was doing his acoustic tour, and sang his own beautiful version of Lightning Crashes. I would’ve never have expected he would be such a huge fan. We’re not a light band, but we definitely aren’t a heavy one, so it’s nice to see people like him enjoying our music.”

For Live, Throwing Copper’s 25th birthday also means the start of a sizable tour. The band are heading out on the road with Bush, whose classic album Sixteen Stone also turns 25 this year. When we speak to Ed, he’s taking his time to savor the simple life at home, while at the same time chomping at the bit to get this show on the road.

“We toured so much last year, that it was great to decompress and work on new music and nurture that space,” says Ed. “That’s always a release. We love to tour, but it is intense, and you spend a lot of time away from home. We struck a nice balance over the last couple of years, so that when we get back together, we’re excited. We can’t wait to get out and get rolling.”

How long was this tour in the making? Did you always know you’d do a big tour when Throwing Copper turned 25?

We anticipated it, years ago. Then, mid-last year, we were just saying it would be cool to find another band doing an anniversary like that. We thought about Bush, who had Sixteen Stone that year. With both records coming out the same year, we thought it would be a great idea. So we mentioned it to them, and they were super excited about it.

When you think back on Throwing Copper, what memories come to mind? What was that time like for the band?

We were coming off of our first album, Mental Jewelry, which did really well. We toured a lot for that record, came back, and then we had six months to make another one. Our first thoughts were to put it on college radio and see what happens. You’d never imagine a year later, you’d start the tour in a club in Philadelphia and end it in the Spectrum Arena. In literally one year. It’s an incredible milestone. I just remember it like it was the world ending, and in the midst of it was us just trying to figure out how to adapt into the arenas and larger stages while making sure we kept the edge of the band.

That’s interesting, because I feel like because the singles from Throwing Copper were huge enough that there’s an assumption that Live was always mainstream-oriented, rather than an edgy young band people started to notice.

Absolutely. We toured a lot, and we felt like by the time we started to experience these big moves, we were ready and settled. But we also knew it was going to take a minute, and we had to adapt and be a bigger band. These songs were big songs, and expanded into that space really well. In fact, I feel they were configured in that way, like they were vehicles for that. We designed the dynamic of that record to fill those big spaces that may have not existed for us yet, but they sure did later.

What is it about being from Pennsylvania, and York specifically, that informed Live’s sound?

York is a small-medium sized city-town. I think it’s about high 100,000s in population. You have the downtown colonial district, where the Declaration of Independence’s last signings were done. It’s a blue collar, working class kind of town. Growing up, there weren’t a lot of places to play, especially for an alternative rock band. If you were a heavy metal cover band, you had your pick in the litter, but not as an alternative rock band like we were. So we had to go searching. We kind of adopted those bigger cities, where we really learned to play, and get our record deal. It was really cool location-wise, geographically. Within three hours you could be in most of the bigger cities, like New York, Baltimore, D.C., and Philly. That was a really cool thing about coming from York. The thing also is out of town, there weren’t many bands like us.

This reminds me of an old saying: “Pennsylvania is Philadelphia and Pittsburgh with Mississippi in between.”

You’re right, it’s a no-man’s land in the middle, and it’s huge. People don’t realize it -- you look at a U.S. map and the states are small, like Jersey and Delaware. You can drive through them in an hour, whereas Pennsylvania is massive. As far as playing, we had to do our own thing. Across the river was Lancaster, and there was this club called the Chameleon Club, and they got such cool bands to play. That was one of the few places near us that we played that we felt was really part of our scene.

Is there a town or city on this tour where, to this day, when Live plays, shit goes down?

Anytime we’re near Jersey, Philly, or Connecticut, whenever we play that area, there’s always a notch up in energy. Atlanta, too -- that one was of the first cities that we broke into. That was where we first sold 10,000 tickets and played this big basketball arena. There’re a couple of places where you’re just like, 'It’s on.'

Throwing Copper obviously has a number of singles that everyone immediately recognizes, like Lightning Crashes, All Over You, and I Alone. Are there any lesser known or B-side tracks that you’re really excited to get out and play?

That’s the interesting thing about Throwing Copper. Especially among our hardcore fans, so many of the B-sides are even popular amongst them. And I love that. It’s an album where people listened to the whole thing and loved the whole thing. There’s a song called T.B.D., which stands for The Book of the Dead, which I always thought was one of the coolest songs off the album, and I love to play it live. We had so many cool ideas with it that we couldn’t do back then that I want to do now while keeping that mysterious vibe of it. Not too long after the record came out, I was shopping somewhere in Los Angeles, and someone tapped my shoulder. I turn around, and it’s Ellen Degeneres. I’d never met her before, but she was talking about how much she loved the record, and said that her favorite song was T.B.D., which I thought was very cool. We became friends then. There’s a song called Pillar of Davidson, which is kind of a working man’s anthem. I combined two companies, Harley Davidson and Caterpillar, and thought of all the people that worked at both in our hometown in York, Pennsylvania. Corey Taylor from Slipknot said it was his all-time favorite song. So yeah, excited to play those.

Catch Live celebrating Throwing Copper's 25th anniversary on the road with Bush at one of the following dates:

Why Live’s Ed Kowalczyk Posed Naked For Kerrang! In 1999

Live frontman Ed Kowalczyk remembers the story behind his racy appearance on the cover of Kerrang!’s October 1999 issue.

Bush and Live will embark on a 32-date run in the U.S. and Canada dubbed The ALT-IMATE Tour.

It's great to see these guys back at it after such a long break.