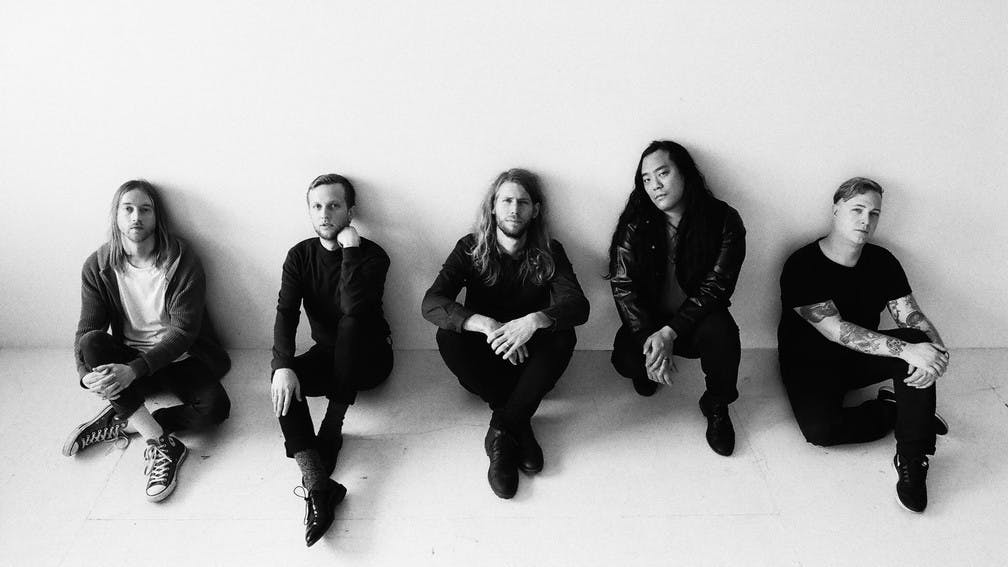 It’s been five years since La Dispute last released a record. 2014’s Rooms Of The Housewas a poetic, emotional story of love between a couple, but new album Panorama tackles grief in a variety of forms, and how this loss is perceived by those close to you.

After writing for two months, La Dispute scrapped everything and started again. This time with a clearer, more ambitious vision in mind.

“We wanted to make a record that was ethereal and otherworldly; we wanted to write an old screamo record, but we wanted it to be proggy and out-there, with additional instrumentation and layers we haven’t done previously,” vocalist Jordan Dreyer tells Kerrang!, drinking his soda water, sat opposite us in a trendy north London pub.

“[2011 album] Wildlife and Rooms Of The House were grounded so much in realism and actual events. Talking about drifting off into a memory and alternate weird timelines has been really satisfying.”

New album Panorama is inspired by a drive Jordan would regularly take with his partner across Michigan, going between the cities of Grand Rapids and Lowell. On the 20-30-minute trip, she would tell Jordan stories, some of which would stick with him, and have made it on to the record.

Here we explore Panorama song-by-song, diving deep into the alternative timelines and realities La Dispute have created. Grief is a driving factor on the album, as Jordan explores his own reactions to his loved ones’ suffering.

“When we first conceptualised the record as a whole, I knew I wanted to talk about loss and the accompanying grief – how it never goes away and how it can come back with prompting. You travel through time when someone reminds you of something traumatic or another point in your life. The idea I had was to use crystals that people think have healing properties. We were going to have these little interludes throughout the record as signposts breaking up the different themes, but when we opted to not structure the record that way, we pushed the interludes out, but had these different things that Brad [Vander Lugt, drums] had made in his home studio. Sonically it’s a cool way to start the record. We wanted to make the record cinematic in scope, we were thinking about visualising the themes from beginning to end, structuring it like one would a film. It’s a cool opening credit.”

“These are very directly that drive. The first two songs are the actual, physical drive, but also the experience with grief that accompanied it – the location or landmark that can remind you of something. You travel through time in those moments; it becomes ethereal or otherworldly.”

Is it a different story for each song?

“It’s different angles of the same story. The first is articulating those moments, speaking more from my own perspective, as someone not directly connected to them, but somebody in close proximity to a person who is. When you circle back to it in the second half of the song, Fulton Street II, there’s an image of walking in the snow and it’s introducing my relationship to the person, but also to be indicative of time elapsing and what my home life was like at the time. The second part is speaking directly to the emotional reaction to those moments. In the first part you get the introduction of the events, and the second part circles back to how they affect the people themselves.”

“That is narrowing the focus even further and talks about the loss of family members. The immediate before, the immediate after, and further down the road. The first part talks about the process of losing somebody, the second part is another snapshot of home life but also how the loss that you or someone in your life has had can affect even quiet moments at home. From my perspective, being adjacent to that loss and adjacent to the aftermath, somebody close to me losing somebody, and how futile it can be in trying to be helpful. When you’re close to a friend or family member of partner, there’s a deep, biding sense of wanting to help, and in some ways there isn’t one. You can be there, you can be a distraction, but it’s a very personal thing for someone to deal and to heal.”

“More so than other songs, it’s an amalgamation of a lot of days and nights. I had a difficult time writing the song because I didn’t want to be too specific, and my tendency is to be very specific. There was a lot of trying to capture a mood rather than specific events. One of the responses to grief is the anxiety that you feel, that sense of unease. And on a much broader scale, that sense of anxiety that everyone can feel at this point in time. I wanted this song to be about capturing that mood, that feeling of being frustrated or panicked. I think everybody has those moods or days.”

It does feel like everyone is one the edge right now.

“When we were writing the record, there was a part of me that thought we should ‘speak’ directly to the ‘current climate’, but also I felt like it was gonna show up no matter what. Inevitably the social and political climate is working its way into a lot of people’s art or everyday.”

“In the midst of making this record, we moved to Seattle, so a part of me was feeling nostalgic for home. Michigan and the surrounding environment has been a principle character to everything we’ve done. This song takes place in the Great Lakes area and was very particular to my experience growing up; it’s a combination of a lot of different nights that my friends and I, or girlfriend and, went camping. More than any other songs it’s metaphorical; it’s not a retelling of a particular event, it’s meant to be illustrative of a mood that comes with trying to help somebody. Not knowing how to help, maybe in the process of trying to help they’re overstepping boundaries or overreacting to something that isn’t there.”

View From Our Bedroom Window

“There’s an image in this song of looking out the window at a house on fire, which isn’t anything I’ve ever done, but felt like a poignant image in some ways. Coming out of the Rooms Of The House record, which was very intimately about a fictionalised couple, I’m looking back on that from an interesting standpoint… or at least I’m telling myself that retroactively. It’s another song about trying to be there for somebody in more of an understated moment than happens earlier on the record.”

The person you keep referring to, how have they reacted to this record?

“It takes a great deal of trust for somebody to open themselves up to that type of emotional prying and then introducing it to the public forum. It was an emotional experience sharing something like that, but a positive one. Ultimately, for how tumultuous the record is, it’s not about tumult in a relationship. This record was written and recorded in what has been the happiest period of time in my adult life. But, nothing is uncomplicated. The happier moments in your life are coupled with difficulties. Part of being fruitful in existence is learning how to balance the duality, and find contentment in understanding that nothing is ever perfect.”

Footsteps At The Pond

“It’s another place that’s not something related to myself or anyone in close proximity, but along that drive was someone’s tragic passing. Initially when we were first conceiving the record we wanted to tell that story, but then decided this record wasn’t going to be a record of stories like Wildlife or Rooms Of The House, it’s going to be a more abstract stream of consciousness.”

There You Are (Hiding Place)

“Six years ago, I met my partner for the first time, and very early she said her favourite phrase was ‘There you are’ because it means someone was looking for you. That always stuck with me. The song is about reckoning with your own inadequacies, growing out of issues that you had, or being pulled kicking and screaming out of them by a group of people who care about you. It’s about how it feels afterwards to be happy or feel content with who you are – not just in the context of the relationships in life, but your relationship with yourself. Whatever your issues might be, push through them. Ultimately you have to want to like yourself. It’s a shitty fucking feeling not caring much for who you are. There was a period of time in my life where I didn’t and it took somebody’s persistence for me to understand that. This song is about having people in your life that want you there.”

“I don’t think you ever get over anything, and losing somebody becomes a part of your own personal fabric, but that literal ascension at the start symbolises somebody coming to terms and incorporating those things into their existence and knowing they’re not defined by them. The second part of the song is meant as a statement of love. Love in all its forms; being a member of your community, your family, friends, whoever your family is to you. I hope it comes through, I hope people don’t think the record is exclusively bleak. It comes from a satisfying moment of time in my life. [Life’s] hard, but it’s not total shit, so long as we all look out for each other.”