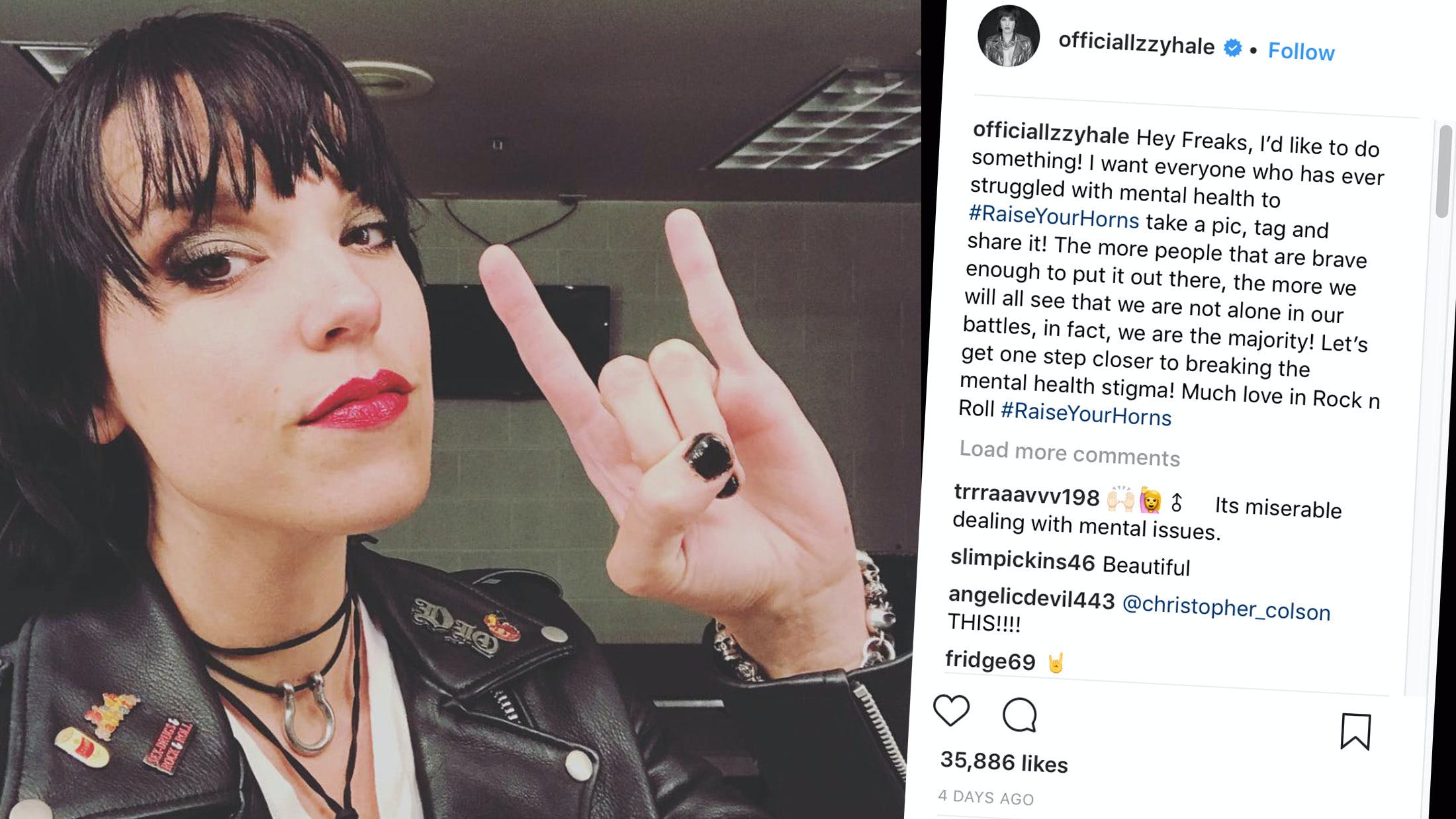 On August 16, Huntress released a devastating statement confirming the death of vocalist Jill Janus, a long-time sufferer of mental illness. Jill had long campaigned to raise awareness and understanding around mental health, and her passing had a profound effect on her peers, including Halestorm’s Lzzy Hale.

Last week’s heart-breaking news prompted Lzzy to act. Taking the torch from Jill, Lzzy posted a picture on social media of herself raising the horns, and encouraged others who’d suffered from mental illness to do the same and tag their posts with #RaiseYourHorns. In the days that followed, thousands of rock fans from across the world shared the hashtag and their stories, with the impact of Lzzy’s post demonstrating the strength that can be found in starting a dialogue about mental health.

Here, Lzzy pays tribute to her friend, and discusses her desire to see conversations around mental illness continue to grow in the wake of Jill’s passing and the #RaiseYourHorns campaign.

Why did you decide to start #RaiseYourHorns?
Honestly, it was kind of a whim of mine – I wasn’t trying to start anything. I wanted to do something for the community and the people I talk to every day online. When Jill from Huntress passed it was a shock to everybody, because we all knew her and always saw her floating around at awards shows and festivals. When you think about how lonely it must’ve been to have been hiding all those things she was feeling, it breaks your heart. And what I’ve learnt from talking to people online is that there are so many people who feel that way. No-one is alone in struggling with their mental health, and, in fact, I think those of us that struggle with it are the majority. I decided to just try something and give everybody a task. I didn’t put that much thought into #RaiseYourHorns – I know it means other things, believe me. I thought it’d be easy for people to take a picture, tag their friends and show everybody that people aren’t alone in feeling this way. The community have just run with it, which has been amazing.

The response from fans has been amazing, and you’ve had lots of support from other bands, right?
Yeah. All of my peers have been sending messages and photos of themselves raising the horns – Mr. David Draiman from Disturbed recently sent me a picture to share with everyone, for example [see below]. It’s been so neat to see, because the people I talk to online who say they feel like they’re going to take their own lives can look at all these people – including so many of their idols – and realise that it’s not just them. In fact, it’ll seem like 90 per cent of the people they know feel the way they do. When situations like Jill’s death come up, you can either respond negatively or try to put a little hope out there, and the latter has been an M.O. of mine. I’m in a lucky position whereby people, for better or worse, pay attention to the things I say. I feel a responsibility to portray that positivity.

Do you feel like a stigma still exists around mental illness?
Yes. I have a very close friend who suffers from bi-polar disorder and depression and takes medication for it, and her partner also suffers with their mental health. But neither one of them will go to therapy or talk to anyone about it, because in their minds, as soon as they talk to someone, that means they’re crazy. And I just feel like saying, ‘No, no, no – you need someone to talk to. Just because you might lose hope every now and then or you might need to reach out, that doesn’t mean you’re weak, it just means you need some help – and that’s okay.’ I’m sure there are people who consider themselves normal who have loads of issues, anyway. You shouldn’t hide these feelings or pretend to be something you’re not, because sometimes we all need somebody.

Are these feelings something you’ve experienced?
Me, my brother and members of our family have had our issues with mental illness, and to be honest, I think everybody does. Everyone doubts themselves sometimes, it’s just more intense for some people than others. The more we can put it out there, the better people will feel. People from every walk of life, including famous rockstars, are affected by mental illness. Fame, money or acting like it doesn’t exist won’t fix the problem – it’s by talking about these feelings that people will get help. For us in the band, we approach our live shows as a form of therapy – it’s gotten to the point where we need to play shows for our mental well-being. Finding those outlets that make you feel good is important, because they can calm you down and give you a perspective on things. Whether it’s playing a rock show, making art or collecting tin cans, you have to hold on to those things that bring you joy. I like to ramble to people online about it, because it brings us together. I’ve seen some Halestorm super-fans from Germany talking to people in Brazil about mental health, and I think that’s really powerful. The more allies we have, the more perspectives we can change.

What would your message to anyone struggling with their mental health be?
You are not alone. I didn’t expect this thing to blow up like it has, but if you search #RaiseYourHorns, there are thousands of people who have taken it upon themselves to say, ‘Here’s a picture of me, I suffer from mental illness. This is what I’m dealing with.’ Hopefully, it’ll make people feel less like an island. I’ve been down those rabbit holes in my mind before, where you feel like you’re the only one who’s dealing with your problem. Things compound themselves and you wonder why you can’t fix the problem, and that can lead to you questioning whether you deserve to be here. So having that perspective and realising you’re not alone is important, because mental illness is human nature. It’s not like there’s a tiny minority that are dealing with these issues – the majority of people will go through some kind of mental trauma in their lives. If these silly ideas I have on the internet serve to calm one person down about their feelings, then I’ll be happy. Everyone is so afraid of not being okay, but it’s okay not to be okay. I have really good days and then I have days where I feel like I have no idea what I’m doing in life. But that’s okay – that’s being human. The problems are compounded by the generation we now live in, because there are celebrities who, through the media, teach us that we’re supposed to be perfect – heaven forbid you have an eyelash out of place! It’s a crazy mentality. The reason I’m passionate about mental health is because I interact with people online every day who are affected by it. I get handwritten letters from fans who are hoping that I can relate to what they’re feeling; people who feel hopeless but then, through music, start to regain that somewhat. Because of that, I can’t not act when events like Jill’s death happen. I want to be an active part of this community and put out that hope when I can. It’s been amazing to see everybody lift each other up over the past couple of days. I get tagged in all these posts, but people need to realise that it’s all them. We have the power to band together as a unit, lift each other up and support one another. It’s been beautiful to watch this happen, especially at a time when it seems like there’s so much negativity in the world. It’s just been really great to see.