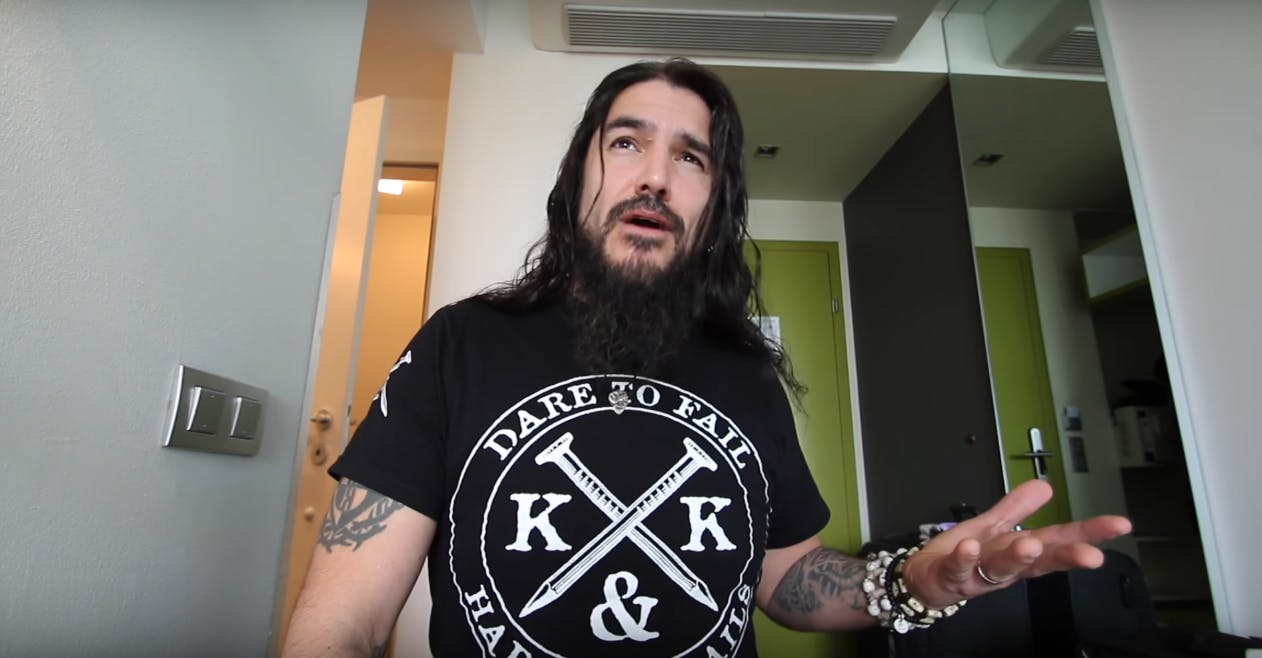 Machine Head’s Robb Flynn has written a post on his The General Journals blog addressing the violence in Charlottesville of August 12, and reflecting the mistakes of his own youth.

Flynn was photographed beside other musicians giving a sieg heil gesture when on tour with Slayer in 1995. When he spoke out against the Pantera frontman Phil Anselmo making the very same gesture in 2016, he was accused of being a hypocrite, and worse.

But, as Flynn writes in his post, published yesterday, “people can change”, adding: “I look back on the person I was in my mid-20s and think, ‘Who the fuck is that guy?’”

Elsewhere in his post – which ends on the vital need to drive white supremacy out of society, noting that “there is only one side” when it comes to this stuff – Flynn calls President Trump’s response to Charlottesville “pathetic”, and talks a little about the shit he and his wife have received in the past for calling out racial hatred when he’s seen it. Hell, when we’ve all seen it.

I’ve debated even writing this.

You all know how I feel.

I’ve said probably all I’ll ever need to say on the subject a year and half ago.

I’m going to tell you the conversation my wife and I had Sunday morning.

As she drank tea (me; Blue Bottle coffee) I told her about the white supremacist rally(s) held in Charlottesville, Virginia on Friday and Saturday, she had only heard bits…

We discussed how people could feel that way, read our president’s pathetic “many sides” response to a domestic terrorist attack by white supremist’s, watched the horrifying videos of a white supremacist’s car barreling though counter-protesters killing one woman and injuring 34, and looked at the barreling car photo in the NY Times showing a pair of shoes on the ground (where a person used to be) while men hung upside-down in the air.

It was seriously disturbing.

I sat in silence.  I let her know I had begun dabbling with one a little before she woke up.

She continued, “Berto, I was scared to go to your birthday bash, worried that some whack-o was going to bomb the place or do something crazy to you, or me, or someone else."

"People know how you feel, do you need to add fuel to the fire?”

I don’t need to add fuel to the fire.

What happened to my family as a result of the “Racism In Metal” video was fucking scary.

She’s not over it.

Hence, why I debated this.

Even a year and half later, when I go out to most big metal shows, at least one group screams “white power” at me.

I keep my head up, do my best to ignore them.

And while a healthy fear of whack-o’s comes with the territory of being married to someone famous, no one “wants that”.

Out of respect to her, I told her if I finished writing something, I would show it to her before posting asking for her blessing.

She read this and said "go for it”.

So I’m not gonna offer my opinions on the events in Charlottesville.

Instead, I’m gonna tell you a story about a journalist I used to know.

His name was Onno Cro-Mag.

He was a Dutch hardcore journalist / hardcore scene supporter /and co-owned a record company with Agnostic Front’s Roger Miret.

He passed away a few years ago, but the mark he left on me was deep.

And while the story is a little hazy to me 20 years later, I’ll do my best to honor the dead.

I first met him on our 1994 tour across the Europe.  He interviewed me a few times, we shared a mutual love of the hardcore band Cro-Mags, (that’s Onno who comes up and sings back ups on our Cro-Mags cover of “Hard Times” in the Dynamo ’95 YouTube clip). (below)

He was extremely open about that to me during our conversations / interviews and it always caught me a little off-gaurd.  Not in a bad way… but let’s face it, how many ex-nazi’s do you know?  It’s not the first thing you expect to hear out of someone’s mouth.

He explained to me how he’d gotten caught up in some bullshit in the scene, at some point something serious happened, serious enough that it shook him out of it.

He never looked back.

At least in the handful of conversations we had, he looked back on those days with a brutal honesty and regret that was palpable.

But he wasn’t apologetic about it, he was strong about it.  He fucking owned it.  It was a life-lesson that he never let himself forget.

I gotta tell you, I’ve never met anyone quite like him. And it’s not like because he realized the error of his ways, that all was forgiven.  No, no, no.  He faced considerable danger from his ex-partners, he faced a considerable lack of trust from people who knew the “old Onno”.

It bothered him deeply.

We could all learn a lot from Onno Cro-Mag.

We should all aspire to be so honest with our flaws.

Because we all have them.

We were/are all assholes at one (or many) points in our lives.

I’m no exception to that.

I look back on the person I was in my mid-twenties and think “who the fuck is that guy?”

And if you change, someone will always be there to shove it in your face, the asshole you have been.

Now more than ever, in today’s “gotcha” society someone is gonna try and say to you “LOOK, you were like THIS before!"

I can assure you, as soon as I post this, some dickhead will post a 22 year old photo of Kerry King and I (from when MH and Slayer toured together in 1995), arms by our sides, walking alongside Jeff Hanneman and Gary Holt (both in nazi-salute), and go “why didn’t you write a song about these guys?!” Or say, “you’re a hypocrite for saying what you said about Anselmo!”

That’s been the racist’s rallying cry for decades, “how, if you’ve ever been racist, can you decry racism?”.

And the fact is, most people are incapable of change.

Once someones mind is made up, whether via political party, religion, whatever… it’s nigh impossible to change.

It usually takes a considerable tragedy to shake ‘em out of it, and even then…

But people can change.

I don’t care if someone was in the nazi rally Saturday, if they were disgusted by the senseless death of Heather Heyer, and said “Fuck this shit, enough… I’m out”…. we need to be tolerant enough to respect that.

A tad skeptical…?  Sure.

As I wrote this today, I read a story about an ex-white supremacist named Christian Picciolini who started an organization to help people get out of the WP movement called Life After Hate.

In a nutshell:  they are a non-profit created by former members (called “formers”) of the American violent far-right extremist movement. Their goal is to "work with individuals who wish to leave a life of hate and violence, and help organizations (community, educational, civic, government, etc.) in grappling with the causes of intolerance and racism.”

In their own words, "Life After Hate works to counter the seeds of hate we once planted.”

Because on the flip side of this fiery topic, we need be non-judgemental of the defectors of that movement.  The Onno Cro-Mags of that movement, who wish to change, who want out, but fear they won’t be accepted by anyone other than their own.

I’ll leave you with this.

Saturday my buddy Sean Doolittle (ex-Oakland A’s pitcher and current National’s pitcher) was on a tweet rampage (he along with comedian Patton Oswalt were seriously giving me hope for the entire world).

Amazingly Sean has not been silenced and regularly post provocative, thoughtful opinions on political land mines for subjects.

Kudos to him for being such a high profile sports figure, and still letting his voice be heard.

“People say, ‘if we don’t give them attention, they’ll go away’.

But if we don’t condemn this evil, it might continue to spread.  This kind of hatred has never gone, but now it’s been normalized, they didn’t even wear hoods.

It’s on us to condemn it and drive it out.

There is only one side.

Actual nazi’s just marched on Charlotesville, we have to come together and drive this hatred & domestic terrorism from our country.

While it’s important to protect free speech, we have a patriotic obligation to condemn racism and domestic terrorism.”