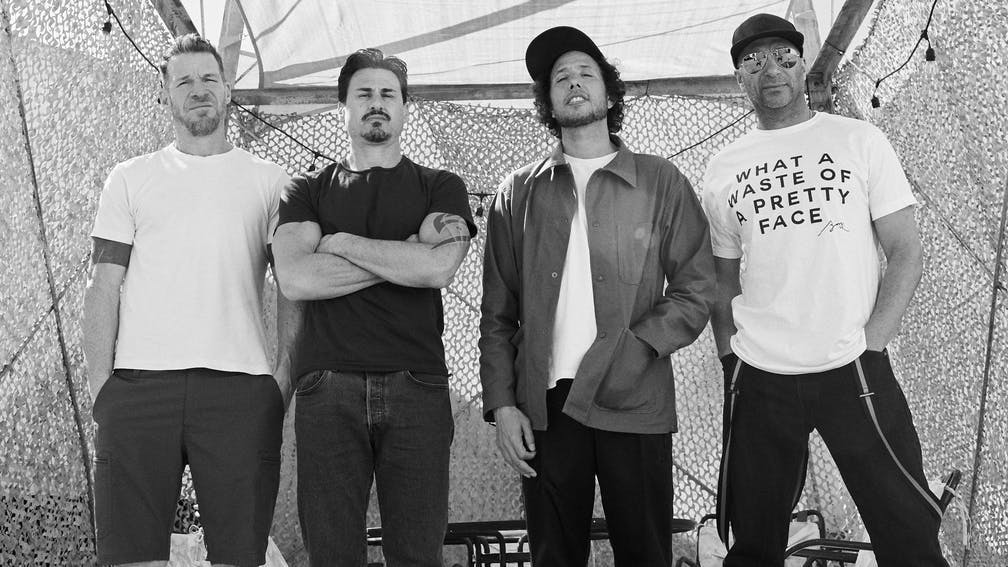 On the afternoon of April 29, 1992, four Los Angeles police officers were acquitted of charges of assault following the March 3, 1991 arrest of taxi driver Rodney King. The brutal beating meted out to King, painfully reminiscent of the worst violence visited upon civil rights activists by southern police forces in the early 1960s, had been captured on videotape, and widely broadcast on news networks worldwide, so the Californian court verdict was understandably met with outrage – though, significantly, not disbelief – in the city’s African-American community, long the victims of discrimination.

Interviewed among a group of protestors outside the Simi Valley courthouse on April 29, Boyz N The Hood film director John Singleton warned that the judgement could inflame long-standing tensions in the city. “By having this verdict,” he predicted, “these people lit the fuse to a bomb.” His words would prove prophetic. Over the next six days, rioting spread like wildfire across Los Angeles, resulting in 63 deaths, over 12,000 arrests and the destruction of one billion dollars worth in property, before order was fully re-imposed.

Six months on, the city’s most politicised rock band, Rage Against The Machine, unleashed a riot of their own. With its sleeve artwork featuring an iconic image of the self-immolation of Vietnamese Buddhist monk Thích Quảng Đųc in Saigon in 1963, the multi-racial collective’s fiercely confrontational self-titled debut album served as a searing state-of-the-nation address from those same burned-out streets, shining searchlights on institutionalised discrimination, racism, injustice, oppression, inner city poverty and the abuse of power. The defiant, provocative message at its core was neatly encapsulated, on its incendiary lead single Killing In The Name, in one unforgettable lyric: ‘Fuck you, I won’t do what you tell me!’

In a decade which saw the rise of grunge, pop-punk, nu-metal and emo, there’s a strong case to be made for Rage Against The Machine – vocalist Zack de la Rocha, guitarist Tom Morello, bassist Tim Commerford and drummer Brad Wilk – being the most impactful and important rock band on the planet. Over the course of three landmark albums – that peerless 1992 debut, 1996’s Evil Empire and 1999’s The Battle Of Los Angeles – the quartet authored a hard-hitting, fearless body of work that today sounds every bit as powerful and inspirational as it did upon its initial release.

READ THIS: What the kid from the cover of Evil Empire looks like now

In 2000, they called time on things, worn down by the intensity of their mission, but not before recording a covers album, Renegades. Their interpretation of classics by spiritually like-minded artists such as Bruce Springsteen, Minor Threat, MC5 and Afrika Bambaataa, left a breadcrumb trail of discovery for fans willing to delve into the original inspirations fuelling their disaffection.

The quartet first reignited their will to fight the good fight once more in 2007, and saw them through until 2011, serving as an opportunity to take a degree of credit not wholly offered previously. Sadly, the same issues which first sparked their fury into flames remained as prevalent as ever. Scoring 2009’s UK Christmas Number One single with Killing In The Name, powered by an online campaign to undermine X Factor boss Simon Cowell’s chart hegemony, was an unanticipated bonus, “a wonderful dose of anarchy” as guitarist Tom recalled. Yet, despite sales of 16 million albums across the band’s career, when interviewed by Kerrang! in 2017, Tom unsentimentally declared Rage Against The Machine’s career a “missed opportunity’ and “a promise unfulfilled”.

“I was aiming to bring down governments,” the guitarist insisted, entirely seriously.

Now that fight continues. Accompanied by an image of anti-government protests in Chile, news of Rage’s second reunion broke on Instagram in November, with the announcement of a brace of U.S. gigs. In February, the quartet revealed touring plans worldwide – including headline appearances at Reading and Leeds festivals – scheduled under the Public Service Announcement tour banner.

It’s no coincidence, however, that rock’s most fiercely political band are returning in the run-up to a U.S. presidential election. Speaking in 2017, Tom Morello declared President Donald Trump, “a singularly dangerous person”, and the guitarist is already closely monitoring the party primaries which serve to narrow down the field for the 59th quadrennial presidential election, scheduled for November 3. The organisational clusterfuck which marred the Democratic Party’s Iowa caucus prompted Tom to take to Twitter on February 6, posting that, “If what happened in Iowa had happened in Iran or Venezuela there would be calls for a U.S. invasion to topple a democratic regime.” Expect further commentary as the contest intensifies.

READ THIS: Can Rage Against The Machine's reunion affect U.S. politics in 2020?

Critics have long sneered at the band’s faith in the power and potential of music to empower, educate and effect change, but from day one the quartet always backed up their sloganeering with conviction and grassroots activism. In their original incarnation, RATM were tireless advocates for social justice, embodied in Harvard graduate Tom’s formation of the Axis Of Justice alongside System Of A Down frontman Serj Tankian, or Zack working on the ground with the Marxist Zapatista rebels in Mexico, or donning a suit and tie in 1999 to testify before the United Nations’ Commission On Human Rights, calling for a fresh trial for Mumia Abu-Jamal (the journalist and former Black Panther who spent 30 years on Death Row after being convicted, controversially, for the 1981 killing of a Philadelphia police officer). Their re-formation is likely to propel the four outspoken musicians to the forefront of campaigns for political and social justice once more: indeed Rage Against The Machine have already stated that proceeds from their first three comeback shows will be donated to immigrants rights organisations. Heaven knows there are no shortage of social ills for the band to rail against in 2020. They return at a time when communities in the U.S., and internationally, appear more divided than ever, with far-right political views gaining traction and activists of every stripe dismissed as “snowflakes” in a culture war stoked by mouth-for-rent media commentators. One thing is certain: this band will not shirk from any fight.

Inevitably too, RATM’s comeback will be met with a degree of cynicism. It may be instructive here to recall just how thrilling their three studio albums first appeared, and how utterly vital and relevant they remain. In weaponising their songs of resistance, the quartet drew upon influences from Led Zeppelin (riffs, dynamics), Public Enemy (polemics, production), The Clash (imagery, integrity) and The Last Poets (rhymes, radicalism) to fashion an electrifying, contemporary vocabulary for rock music. Though the notion of mixing hip-hop, hard funk and harder rock was not, in itself, revolutionary – Rick Rubin’s pioneering work with Beastie Boys and Run-DMC cannot be overlooked – that fusion had never sounded so fresh and fearless, with Tom Morello’s attack-mode riffs occupying a sonic space somewhere between ‘police siren’ and ‘ticking time bomb’, while Zack spat righteous, riveting bars like a street-corner preacher, midway between poetry, prophecy and pre-apocalypse threat.

Beyond its impassioned first single, Rage’s debut album is packed like a nail bomb with apoplectic anthems. Bullet In The Head’s message links the media to political manipulation (‘They say jump, you say how high’), a topic which remains prescient, not least in the wake of investigative journalist Carole Cadwalladr’s dissection of the Facebook-Cambridge Analytica data scandal, while Know Your Enemy finds Zack critiquing the failure of the American Dream for the marginalised, sneering ‘The Land Of The Free? Whoever told you that is your enemy!’ Evil Empire has lost none of its caustic insight either, with Bulls On Parade still on-point in examining America’s bully-boy tactics when dealing with Mexican immigration, and Vietnow offering a prophetic vision of the modern age with its savage assault on the inflammatory rhetoric and lies peddled by hard-right media.

Moving on to The Battle Of Los Angeles, Testify’s nods to George Orwell’s 1984 – ‘Who controls the past (now), controls the future. Who controls the present (now), controls the past’ – seem frighteningly perceptive, as do the references to ‘a terror era coming through’ on Voice Of The Voiceless. And while elements of Rage’s uncompromising spirit, soul and integrity are easily detectable in both contemporary rock (Refused, Rise Against, Stray From The Path) and hip-hop (Kendrick Lamar, Childish Gambino, Run The Jewels) in 2020, there’s much to celebrate in the return of the original unit with fire in their bellies once more. The problems they sought to address certainly haven’t disappeared, indeed they only seem to be intensifying with each passing news bulletin. In summer 2019, the LA Times reported that about one in 1,000 black men and boys in America can expect to die at the hands of police, according to a recent analysis of deaths involving law enforcement officers, making the risk to them 2.5 times more pronounced in comparison to white men and boys encountering cops on patrol. Closer to home, the scandals over the deportation of the Windrush generation and the buck-passing surrounding the Grenfell Tower tragedy should enrage any right-thinking person. No Rage Against The Machine song will provide easy solutions, of course, but their ability to draw together dissenting voices can only be a huge boon in building coalitions of resistance.

In 2017, Tom Morello was speaking about Prophets Of Rage, but indirectly referencing RATM, when he told Kerrang! “Dangerous times require dangerous songs, and this is not a period where it’s enough to tweet about it. We aim to play like the soul of everyone in the room is at stake.”

In 2020, for Rage Against The Machine, that campaign will begin in earnest anew.

READ THIS: 12 bands who wouldn't be here without Rage Against The Machine