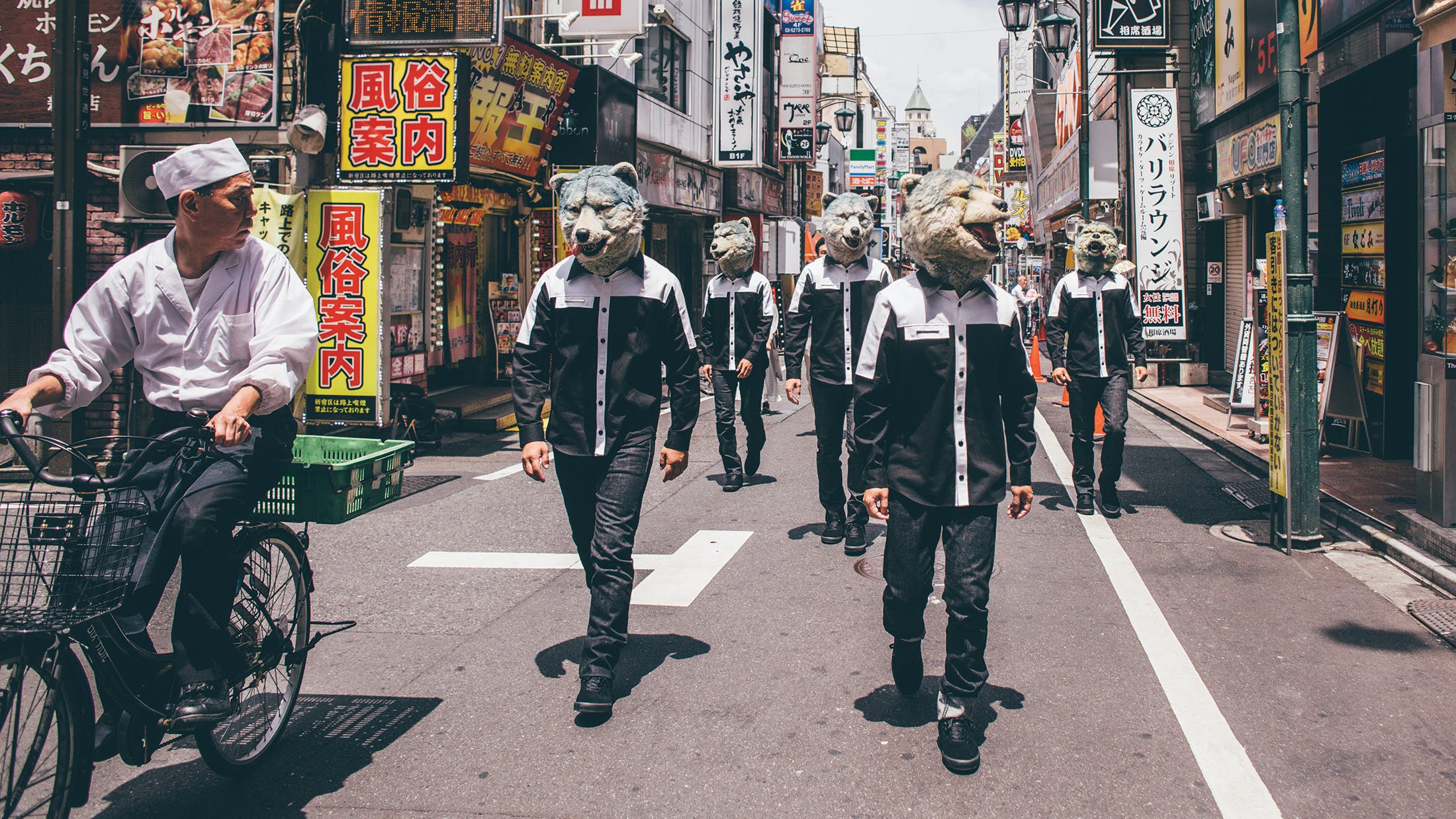 If you picked up last week's issue of Kerrang!, you'll have read all about Japanese superstars MAN WITH A MISSION and their amazing, mythical story.

Now, band leader Jean-Ken Johnny takes us further into the quintet's wild world, discussing new album Chasing The Horizon – due out on August 10 via Century Media – as well as his influences, the importance of addressing wider-world issues within music, why Artificial Intelligence will take over the world and more…

Who were the first bands you ever loved?
“I was definitely influenced by all the music that was going on in the ’90s – like, alternative-style rock. Smashing Pumpkins, Dinosaur, Jr., Sonic Youth, and even some of the guys in the UK: Stone Roses are one of my favourites. Those guitar-rock bands are my favourites.”

And are they still your favourites now?
“I listen to them as well now, but I also listen to a mixture of stuff. I love Rage Against The Machine, and things like that. I listen to almost everything, and what’s going on right now is really cool. I love Imagine Dragons, too. They’re a good band.”

MAN WITH A MISSION take influence from a lot of different bands…
“Everybody has different taste. I was really into alternative rock, but the bass player – who is another songwriter, too – is definitely really touched by the melodic punk movement that was going on in the ’90s: blink-182, Bad Religion, stuff like that.”

When did you realise that you wanted to talk about wider-world issues in your music?
“Probably one of the reasons was definitely that we were worried about what we were doing in those early days. Though we’re half-human and half-wolf, we're always about wondering what’s going on in the world. And also what we can do with the world. I guess that’s probably the main part of what our lyrics are trying to say: figuring out what we are, figuring out what we wanna do, and figuring out if there is a right way to achieve it. That’s definitely the main message of all our songs.”

Was there any kind of singular theme when it came to Chasing The Horizon?
“That album really amazed me, because it was made spontaneously. We were just focusing on: ‘What kind of rock music do we want to make in 2018?’ And we’re big fans of rock music, but at the same time – it’s sad to say – we kind of sensed that rock as a genre is not as vital as what we were listening to in the ’90s. So we had a sense of focusing on, ‘What should we do with our rock music?’ We definitely wanted to make it sound rock, but not dated, but at the same time not something that is totally new. We always want to focus on heritage – that’s a really important thing about rock music, to me. But Chasing The Horizon is just focusing on rock music, and what we want to do now, today.”

Do you believe that there will be a time when rock becomes the biggest genre in the world again?
“Well, looking at history, it’s always going in waves. Right now hip-hop is way over rock music right now, but that’s not sad, to me. It’s natural. It’s not because the bands right now suck or anything – it’s like people just listen to certain genres and don’t worry about it. But, at the same time, we still believe that even in hip-hop music, or EDM, or club music, you can still hear an essence of rock music. So I believe that people these days still love something about rock music, and we’re not worried about rock disappearing from this world or anything.”

With artists more commonly releasing mixtapes and EPs through Spotify, has that played a part in rock's supposed 'decline'?
“Maybe, yeah. Now these days it’s easy to pick up one song and you hear it, and it’s always on YouTube and Spotify – everywhere, right? So maybe that’s one of the reasons bands are like, ‘Rock music is decreasing a little bit.’ But that’s that. If I were a consumer, I’d pick that too! It’s so easy.”

Tell us about several different songs that represent Chasing The Horizon…

2045: “The first song that introduces the album, 2045, was a really amazing song that was made from our bass player. I’m really glad that it’s the first track, because it represents that we’re trying to do some new stuff, and make a new phase with rock music. It’s about the idea that Artificial Intelligence may take over the world by 2045 – like The Terminator! They might get smarter than human beings, and a lot of scholars say that 2045 might be the moment that everything changes. We were talking about that, because that’s a common alert of what we’ve been experiencing for a long time. That news when the female AI said that they were going to kill you one day really freaked me out. I guess that’s gonna happen. I really believe in technology – computers one day can overcome us. Well, we’re all wolves, so it’s going to overcome you… But, at the same time, I really sense that that day is going to come. The only thing you can do is stop using computers, which nobody is gonna do, because it’s so easy and convenient to use. So there’s no way in stopping that, and we’re just going to have to face it.”

The Broken People: “This was a new challenge that we did with our sound. The producer is a member of the Boom Boom Satellites. They’re a legendary band, and they were really huge in Europe because of their great beats, and he wanted to have that essence in our songs, too. And as we are focussing on spreading our music more and more to the world, we definitely believe that that essence moves a lot of people. It moved a lot of people in Europe in the ’90s. We believe that the same essence will help us too, and it really worked. There were six songs that were produced by him, and I’m really satisfied with all of them. Broken People is a little fast, kinda hardcore punk, but a little cyber. It’s one of my favourites on this album. Lyrically it’s about getting angry with people that piss you off (laughs). It’s really worrying about common people, because everybody thinks that they’re okay – they’re living in an ordinary world and what they’re doing is okay, but that’s not true. They have to be careful about what’s going on in each and every moment.”

Chasing The Horizon: “That song was made with a producer in America, Shaun [Lopez] – he used to be in a band called Far. We worked with him a lot, and he’s the kind of guy that had the same questions that every other band had that rock music might be a little more weak than we thought it was. We have to update the sound of it, but definitely have the essence of rock. He was always experimenting with a lot of sounds and gimmicks, and I really respected that. I really love the wide range that rock music has, and we just focused on keeping that sound: poppy, but really aggressive.”

Break The Contradictions: “That’s another heavy and aggressive song at the same time. That was a song that the engineer and producer was like, ‘This is fucking cool!’ It really helped me a lot. I’m always in love with what I make, but at the same time I’m really worried about it. So whenever people from the outside say, ‘This is fucking cool,’ that makes me satisfied. That was a moment that made me glad I was making this album. I was worried about if we were putting too much imagination or ideas into new stuff. We were anxious about that, but in that moment I sensed that we were going in the right way, and it’s going to be a great album. You always have to find that balance – which isn't a good thing to say if you wanna be a rockstar (laughs), but making what you’re really satisfied with, but at the same time noticing what the world wants!”

MAN WITH A MISSION are performing at this month's Reading & Leeds – grab your tickets for that at this link.

Man With A Mission

Album Of The Week: MAN WITH A MISSION's Chasing The Horizon