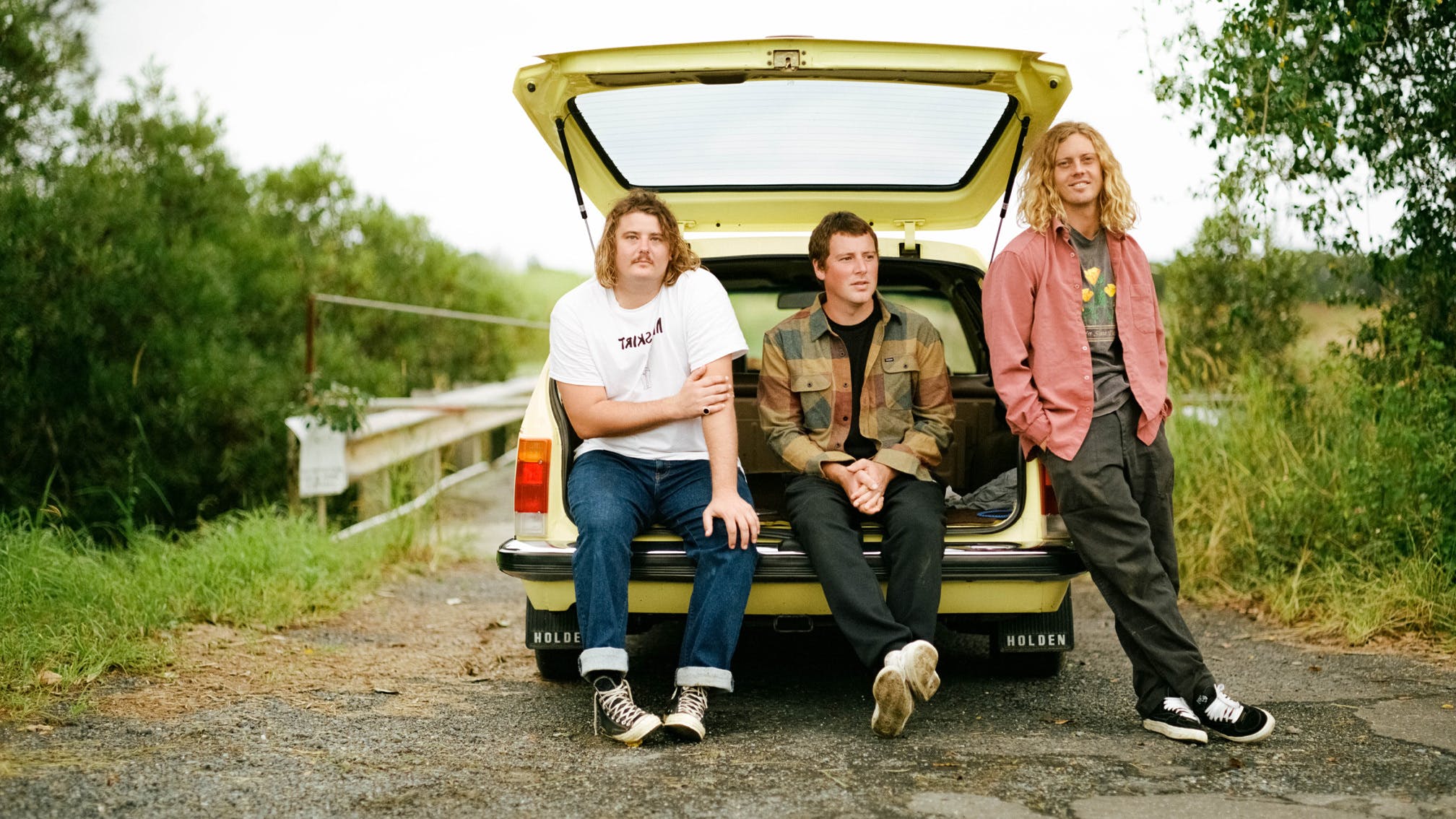 It’s 10am in Australia, but that doesn’t stop Ben Reed and Jonny Lani from each cracking open a bottle of beer. Needless to say, the vocalist/guitarist and drummer, respectively, of Byron Bay’s Skegss are in fine spirits. And for good reason – everything is going incredibly well for the band that the childhood friends formed back in 2014. Their debut album, 2018’s My Own Mess, hit the Number Two spot on the Australian charts, and the trio – completed by bassist Toby Cregan – have toured all over Europe and America. They’ve now followed up that first full-length with Rehearsal, a set of songs that should see their reputation continue to spread even further from their rather isolated corner of the world. It’s so isolated, in fact, that the band – who even played a (half-capacity) gig in Melbourne just a few weeks before – say that life for them has barely changed.

“We live rural,” says Jonny, “so if you don’t watch the news, you’d never know anything was going on. Like, my local pub never had more than 10 people in it at once anyway, so it’s always open. You realise it a bit more when you go to the city and they’re all wearing masks and stuff, and it’s like, ‘Oh shit, it is real.’ But out here it’s like nothing has happened.”

Perhaps even more remarkable than their continued ‘normal’ existence is that they also had no idea of the ‘difficult second album’ concept, especially after having such success with their first. They just carried on as usual.

“I hadn’t actually heard of that before until someone mentioned it the other day,” chuckles Ben. “I wasn’t conscious of it at all.

“And we recorded it at the same studio as the first album,” he adds, “so it wasn’t that daunting. We were very familiar with the set-up. We really just wanted to keep creating for the people that are enjoying it. So I guess we’ll be shitting ourselves for the third record!”

The pair’s laidback demeanour matches the easygoing vibes of their surf/garage/slacker rock, and while they don’t disagree that life in Australia is that far removed from the stereotype of beers, beaches and shrimp on the barbie (“It kind of is, actually!” they laugh), it would be a mistake to think their music drifts by in the breeze without meaning. Quite the opposite, in fact. Rehearsal is a collection of songs that ponders on the meaning of life, an album that seeks to make sense of the world. Much of it is inspired by personal experience and full of melancholy sentiments, but films and comedians are also big influences, and Ben likes to reframe ideas he sees or hears elsewhere in the context of his own songs. Indeed, the last song on the album, Lucky, shares its name with one of late actor Harry Dean Stanton’s films.

“It was one of the last movies he did,” explains Ben, “he’s kind of questioning a lot of things in life and the world, because he thought he was on his way out. When you come across things like that that that you resonate with – or with, say, Dave Chapelle, who has different ways of looking at things in his comedy – you want to recreate other ways to explain them to other people if they don’t watch those kind of movies.”

It all comes together to form the Skegss worldview – these little slices of life that add up to create a bigger picture of the world at large. That’s because – in stark contrast to the ‘slacker’ tag and the connotations it evokes – the band’s songs work hard to unravel the wonder and mysteries of life. It’s a reflection of how much time Ben spends pondering this stuff.

“I think I do that a bit too much,” he laughs. “Not even just with songs, but in general. I’m that hella annoying friend who always gets a bit too deep!”

Asked if that’s true, and, if so, how he copes with it, Jonny just smiles, nods and raises his beer with a knowing glint in his eye.

Yet for all that deep thinking, there’s no pretension to what Skegss do. Their music is a pure reflection of both who they are and where they’re from. Take, for instance, Bush TV, one of the standout tracks from Rehearsal. Its title is Australian slang for ‘campfire’, but you don’t need to have spent a night in the outback to relate to its heart-torn sentiments. That’s because of the one overriding principle that guides the band when they’re writing.

“I think people really respond to honesty and when you’re just being yourself,” considers Ben when asked why people 10,000 miles away can still relate. “But if you bullshit, people will eventually sniff it out. I don’t think we ever try to push it beyond what we are.”

That goes for their aims and ambitions, too. They started Skegss because they realised they’d get free beer for playing gigs, and have exceeded any and all expectations they ever had. It’s no surprise, then, the trio are happy to keep surfing the wave they’re on and not put any pressure on themselves. They will, as they always have, just carry on as usual.

“It’s really just nice to let this happen naturally,” says Jonny. “We don’t want to be jamming anything in anyone’s faces, but if they come and they want to listen to it, it’s a beautiful thing.”

“I did want this record to have a more diverse range of songs, though,” adds Ben, “so if we get older and we’re still doing this but are too old to run around, we’ll still have a few songs that we can just play in a chilled way. It’s also good if we decide we want to play a gig in the pub around the corner – we can just take our chilled songs and go do that!”

Rehearsal is due out on March 26 via Loma Vista Recordings.