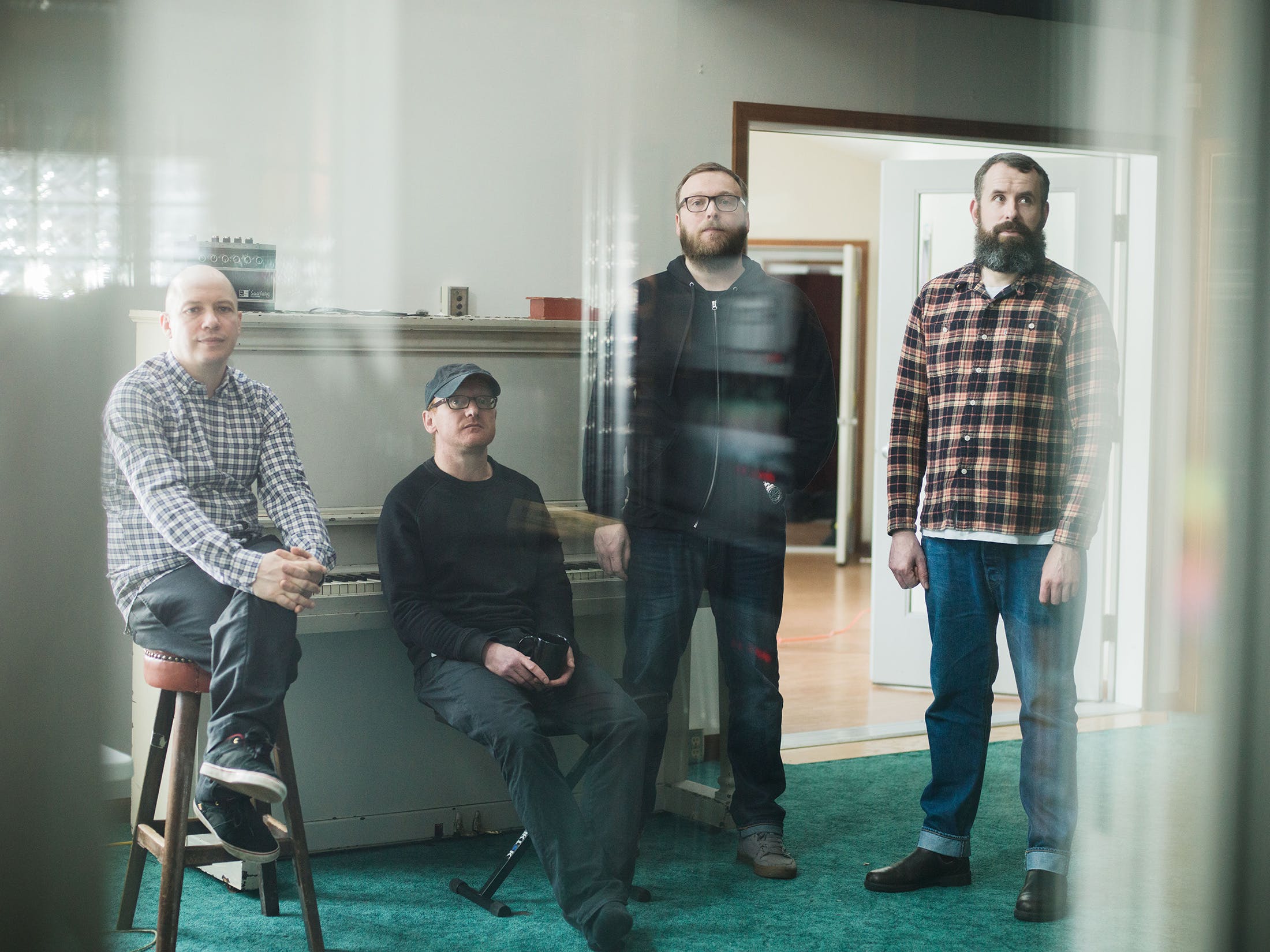 Few British rock bands can balance astonishing, affecting power with meticulously managed control of their craft quite like Glasgow-formed foursome Mogwai. And that the outfit continues to surprise and enthral many, many years after their debut album Young Team emerged in 1997 marks them as special indeed.

With 10 studio albums, seven soundtracks and numerous EPs, compilation appearances and remix collections to their name, you’d forgive the quartet for slipping into auto-pilot on occasion. But as their music still makes clear: this is a group consistently firing on all of its creative cylinders.

Kerrang! caught up with Mogwai’s guitarist and ostensible frontman, Stuart Braithwaite, to discuss making music for movies, maturing as a band and more…

As a primarily instrumental band, it’s not like your politics are regularly conveyed in your lyrics. But when you read about other artists – and people in movies, and video games – wanting to keep politics out of their art, how does that make you feel? Surely, these days, where we’re all so connected, politics can’t help but inform and shape everything we create?
"I think all art is political. Just creating art, making music, or a movie, is a political act, because you’re choosing to spend your time making the world a better place rather than just trying to create wealth. Obviously, sometimes the borders kind of cross each other. But I think the reason why, today, there’s a lack of explicitly political music is because information travels so quickly that by the time your record is mixed and released, the nuances of the song in question might have become obsolete. But yeah, making music has to be political, unless you’re making it purely for commercial purposes, and I don’t think that applies to many people."

2017’s Every Country’s Sun album was your second consecutive UK Top 10, which is surely something you never saw yourself achieving with this kind of band, when you started?
"We never could have imagined it. And it does mean something to us – especially as we run the record label these days, it means a lot [Mogwai release their albums through their own Rock Action label]. It means that we can pay the electricity bill! But no, it’s good. I think we’ve been lucky, and people have been really loyal to us. Also, our music seems to appeal to different generations, so we’ve had younger people picking it up, as well as the fans who’ve been with us since the start.

"So we’re really grateful, especially now that we’ve made so many records. I can remember when we were recording our fifth album [2007’s Mr Beast] and thinking about how few bands we liked had made it that far, to a fifth album. It’s good, and we’re very lucky."

Young Team is old enough to order a drink in the States. What’s it having?
"It’d probably have a Long Island Iced Tea, in the U.S., because they never have any Buckfast."

Joking aside, with Top 10 records now scored, do you remember what the band’s realistic ambitions were when Young Team was about to come out?
"I think our only ambitions were to play the Barrowlands in Glasgow, and to get played on John Peel’s show. And, kind of amusingly, were didn’t think we’d ever headline the Barrowlands. I thought we’d be begging to get first on at a Sonic Youth show, or something like that. We’ve played there a bunch of times, now, and everything since has been a bonus. And that sounds like one of these pointlessly humble things people say, but it’s true."

In 2018 you released the Kin soundtrack. What attracted you to the film enough to make you want to produce its soundtrack? You can’t be short of requests, after all…
"We just got on well with the directors, Josh and Jonathan Baker. They’re into a lot of the same stuff as us, and are about the same age, so we’ve all grown up with the same 1980s sci-fi. We’ve never actually done a proper movie before, just documentaries and TV, so it was something different. And it’s a good film. It made us try some things that we’ve not really done before, because of the kind of movie it is. It was a good experience for us, definitely.

"There’s always a bit of mystery when we start working on these kind of projects, for film and TV, because you never know how it’s going to be. If we get a good vibe from the directors, though, that’s always a good thing. With soundtrack work, you have to really work with the directors to understand what they want, as they’ll often use very non-musical language to try to make their points. It can be hard to understand, but it’s fun to get to the end result."

With Kin, did you know exactly what you were making the music to? Did you get shown any scenes?
"Back when we did Les Revenants for French TV, we just had the script and some photos. But for Kin, we already had a short film to help direct our thoughts, called Bagman, that the Bakers had previously made. It’s really the basis for Kin, and you can watch it online right now. Seeing Bagman was really the clincher for this one."

There’s one song, at the end of the soundtrack album, called We’re Not Done (End Title). Which, presumably, is the music that plays over the credits. Now, it’s pretty upbeat for a Mogwai song. Can we assume that the film ends on a happy note?
"Kind of, yeah. I mean, that was a song that we wrote under instruction. The directors wanted something really euphoric for the end of the movie. And that’s another thing I like about these projects. That song would never have happened, had Josh and Jonathan not asked us to score their film. They pushed us into doing something that fit their vision – and that moves you, as an artist, into places that you wouldn’t normally be. I like that.

"I think as we’ve got older, we’ve followed this learning curve with making music that, when you’re doing it for someone else, like for a film, you’re working for them. It definitely took us a while to have that mindset. If someone asked us to do, y’know, a pop-reggae song or something, we’d probably draw the line. But nowadays, if you’re in a collaborative process and someone asks you to do something you might not normally, naturally pursue, then it’s often worth trying. And of course, it helps you learn, too – and take those lessons forward into your future records."

At this point, so many years deep into your career, what do you hope people get out of Mogwai? Part of making music is for it to be heard, of course – so what do you want people to feel, when it comes to your work?
"I think if our music can work for you, in whatever environment you find yourself in, then that’s a great compliment. But I genuinely just hope that people enjoy our music. How they enjoy it is up to them, as some people find our songs to be incredibly sad, and for others, it makes them really happy. At the end of the day, you’re just trying to play your part in making the world sound a little nicer. It’s a big, big honour to have people excited about your music."

And if everything does come crashing down with Brexit?
"I’m definitely not going to be taking it [lying down], no. I’ll be driving down to London to smash the windows of Parliament. See you there."

This interview was originally published in 2018.

There was something in the water of British rock at the turn of the millennium.