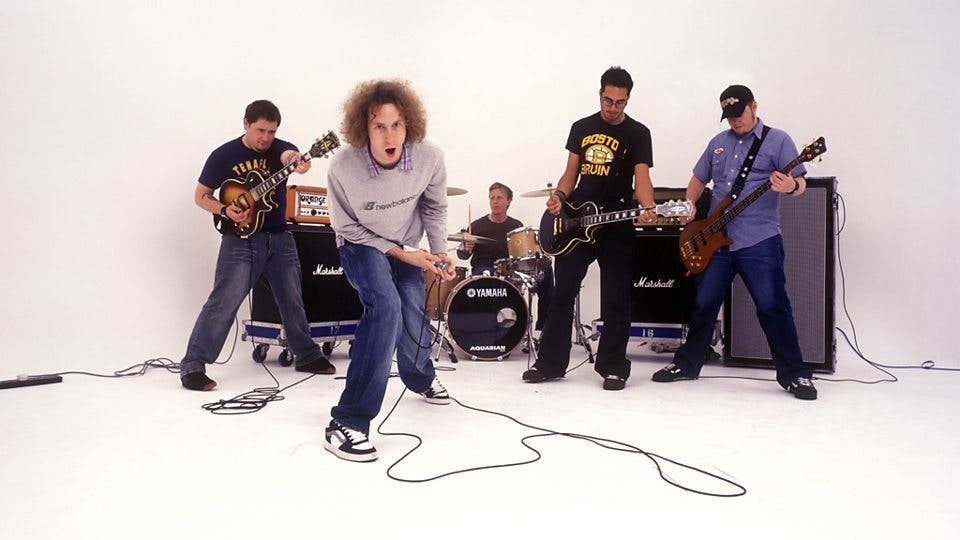 Just a bunch of old albums that were amazing back when? Nah, there's more to these sets than that. Every one of these albums, of Mike Diver's uni years, are worth exploring today, be that again, or for the very first time.

I was at university from 1999 to 2002. And that period coincided with some fantastic bands breaking through from the British rock underground to the forefront of magazines like Kerrang!, and so many more. Coincidence? Probably – but there’s no doubt that I was buying a lot of music, and hitting a lot of gigs, back then, because the quality just kept coming.

Where to begin? Hundred Reasons (pictured, above) are as good a place as any, given the calls for their Ideas Above Our Station debut LP of May 2002 to have been included in our recent piece on first albums never to be bettered. And, sure enough, the Hampshire post-hardcore crew’s early material absolutely rocked with a rawness, a trueness, that later recordings didn’t quite live up to. (Which is not to say it was bad, at all; but there was something so pure, so precise, about the pop-savvy punch of tracks like Remmus and Silver that remains incredibly moreish.)

Ideas Above Our Station is, incredibly, 15 years old now. Wow. That makes me feel ancient. So, to belatedly celebrate that anniversary, and to roll down memory lane for a little, here’s a summary of said LP, plus six more that emerged in that three-year window of awesomeness that, really, no rock fan today should go without hearing. (Shout out to the many other artists and albums I could have included here. You, too, were great, and thank you.)

Hundred Reasons – Ideas Above Our Station
(Columbia, May 2002)

When they burst onto radars with the Fierce Panda-released EPOne of 2000, Aldershot’s Hundred Reasons immediately rocked with amazing potential. Melodic, muscular, memorable, the three-tracker was a phenomenal sign of things to come. And Ideas Above Our Station – which doesn’t actually feature any of that first release’s material – was the culmination of the group’s scintillating early stages.

Above: If I Could, from Ideas Above Our Station

Sweat-soaked shows and a series of shorter releases (including a terrific split with Boston’s Garrison – look them up!) formed the foundations for a long-player that ducked and weaved its way through stateside post-hardcore and emo’s recent past, while all the time possessing a very British undercurrent of self-reflection. The album’s attitude felt positive, forward-looking, ambitious and exciting – something that couldn’t always be said of Hundreds Reasons’ US peers.

London’s Seafood seemed to spend every week on tour, when I was in my late teens and early 20s. Somehow, the four-piece managed to record a bunch of albums – and this, their first or second depending on your appreciation of 1998’s mini-album/singles compilation Messenger In The Camp, absolutely elevated them from ones to watch to ones to rock to, right this very minute.

Above: Led By Bison, one of the gentler cuts of Surviving The Quiet

Guntrip, the opener, grabs you by the neck and tosses you against the wall; Folksong Crisis is a sweet-and-sour sing-along that rides its hooks like Sonic Youth thrashing it out with Sleater-Kinney; and the more subdued numbers showcased a young band reaching a kind of creative maturity that’d feed into a very good follow-up, 2001’s When Do We Start Fighting…

It’s not all 100-miles-per-hour fare, this; but when they really wanted to make your eardrums pop, Seafood could kick up a raucous racket with the very best of them.

The hype was positively palpable around My Vitriol. The London quartet were, the press at the time told us, signed to Infectious after just a handful of gigs, and their (super) early Org-released material went for big money in the pre-eBay days. Finelines was, until 2016, the band’s only album – and its release felt like A Moment.

Above: The video for Grounded featured Vincent Gallo, who’d appear the next year in Glassjaw’s Cosmopolitan Bloodloss

And it was a moment built up to with a steady flow of material, a lot of which tickled the edges of the singles chart. The band toured hard – I’ve a handful of ticket stubs from the time, evidence enough of their ethic – and were rewarded with an album that elegantly blended shoegaze elements with a punk-indebted bite.

Finelines could have been the launchpad for a trajectory towards recognition and worldwide acclaim on a level with the biggest and best from the US. But a hiatus of 2002 inevitably stalled the band’s career, and a much lower-key comeback has connected mostly with faithful fans rather than newcomers.

Camden’s Cay were a name propping up bills for what felt like the longest time – and then, brilliantly, beautifully, this album roared into life. It was lightning never to be repeated though – already rocked by in-fighting before the LP’s release, the band shed two founding members in 2000, and simply disappeared soon after.

Radio silence followed. Drummer Mark Bullock, one of the two who’d walked out, picked up sticks for Feeder for a while. Then, in 2011, a headline, of the most tragic kind: vocalist and guitarist Anet Mook had died, having been hit by a train, in her native Netherlands.

Above: Nature Creates Freaks was the final single taken from the album of the same name.

Nature Creates Freaks, though, remains an irresistible listen – raw and ragged at times, but always underpinned by a level of accomplished musicianship that so many of the outfits kicking around London at the time could only dream of. There was anger and fury, spite and venom – and then, something softer, sweeter, potentially anthemic if things had gone differently.

The record’s title-track for example, with its Nirvana-like switching between gentle verses and a roaring chorus, has all the ingredients of a classic that could have been. NME once compared Cay’s approach to songwriting, to performing, like “a tractor ploughing through a field of broken glass”. How I wish they’d ploughed on.

Nottingham’s Six By Seven were a name I knew without ever knowingly hearing them, if you get what I mean. And then The Closer You Get came out, I picked it up pretty much on a whim – and today, it remains one of my favourite albums of all time.

The Closer You Get is the band’s second LP, and last to feature their founding line-up. And it’s just the most bracing and tender, speed-dizzy and deliciously self-reflective collection; a real seesaw of ever-accelerating rockers and brake-down slow jams that aim for the heart and puncture it like a flesh balloon.

Above: New Year is an elegiac explosion of emotion, splattered all over the pavement. Still gives me goose bumps.

Critical acclaim came quickly in the wake of the album’s release, but wider recognition, realistically, didn’t. But then, for all their flirtation with the big time in the late 1990s and early 00s, Six By Seven were always too individual, too comfortable with their own disquieting ways, to break out. Too clever, too – there’s such fierce intelligence across this LP. And every word that spills from vocalist Chris Olley’s mouth sounds meant, like he shaped these lines out of clay before smashing them over your head.

And that ending. Those final words. “The dream is sweeter than the taste.” Still bouncing around my head, near daily, so many years on.

Probably the band you’re most likely to know, if you’re coming at this piece from the perspective of being born not long after these records were released, on account of Mogwai still being active, and massive in the right circles. Come On Die Young, or CODY, is the Scottish act’s second album, and it was how I first clicked with their trademark turbulence, contrasted as it is with passages of serenity, the latter of which makes up the bulk of this LP.

When your record opens with a track called Punk Rock:, certain expectations present themselves. Put them aside, though, because while Mogwai have always exhibited a punk attitude in their ethics and practices, their music isn’t what would instantly be regarded as “punk”. The opening track proves to be Iggy Pop selling his own wares in an interview from 1977, backed by slightly sinister guitar lines. The kind of music that feels like it’s about to lead into something much bigger, and louder.

Above: Cody, this album’s first song proper, was covered by Deafheaven in 2012.

But Cody, the track that follows, isn’t that – this is sombre, sober, subdued. And gorgeous. And surprisingly huge, too – the song found its way to Skins, some years later, and has been covered by Deafheaven. Its vocals came as a surprise – Mogwai’s previous LP was, save for an Aidan Moffat (of Arab Strap) guest slot, instrumental. But here was this glacial-paced song of such bittersweet beauty, carrying a vocal from Stuart Braithwaite. If acute heartache had a sound, it might be something like this.

CODY is largely a hesitant record, slow to reveal itself, reserved in its tumult. Penultimate number Christmas Steps cracks that spell, though, moving through its gears to peak with some terrific noise, before calming, descending, into the outro of Punk Rock/Puff Daddy/Antichrist. Mogwai, man – they knew how to name songs.

Another Scottish outfit that’s very much still active, the Idlewild of today isn’t as wild as the band that burst, kicking and screaming (often literally, on stages around the country), into the music media and on-looking audience with 1998’s mini-album, Captain. By 2000 and this second album proper, they’d mellowed a little, found some irresistible tunes, and began to score chart hits.

But while the likes of Actually Its Darkness and Little Discourage were full of pop smarts, raucous but in tune with what clicked in the mainstream (both were top-30 singles), 100 Broken Windows featured some fine moments of purer fury. Idea Track is foremost amongst them.

Above: Idlewild’s Idea Track, not a single, but how we used to slam about the place to this.

I’ve long believed that it was a song put together both in protest to the band’s label encouraging them to write new material faster, and as an example of what shape that material might take. I don’t know how much Actual Truth to that there is, but the repeated lines of “pretend it works a while”, and “your grave, it’s your grave”, implies there might’ve been a blockage that needed popping in the creative process of this album. “I don’t care if I don’t have an idea track / It’s an idea track.”

And now I’m bouncing around my uni halls again, to this. How we used to love this record going on, before going out. Few cans, some chaos, and then into town, here or there, to dance on.

100 Broken Windows was named The Skinny’s best Scottish album of the decade, and you can file it beside The Closer You Get as one of my own GOATs. And if it’s all new to you, this album or any of the above, I hope you enjoy exploring some golden sounds of yesterday. It doesn’t feel so long ago, but damn, time marches, doesn’t it?

Mogwai’s Stuart Braithwaite: "Creating art is a political act, because you’re choosing to spend your time making the world a better place"

Vocalist/guitarist Stuart Braithwaite talks the endurance of Mogwai, the definition of success, working on music for movies and more…