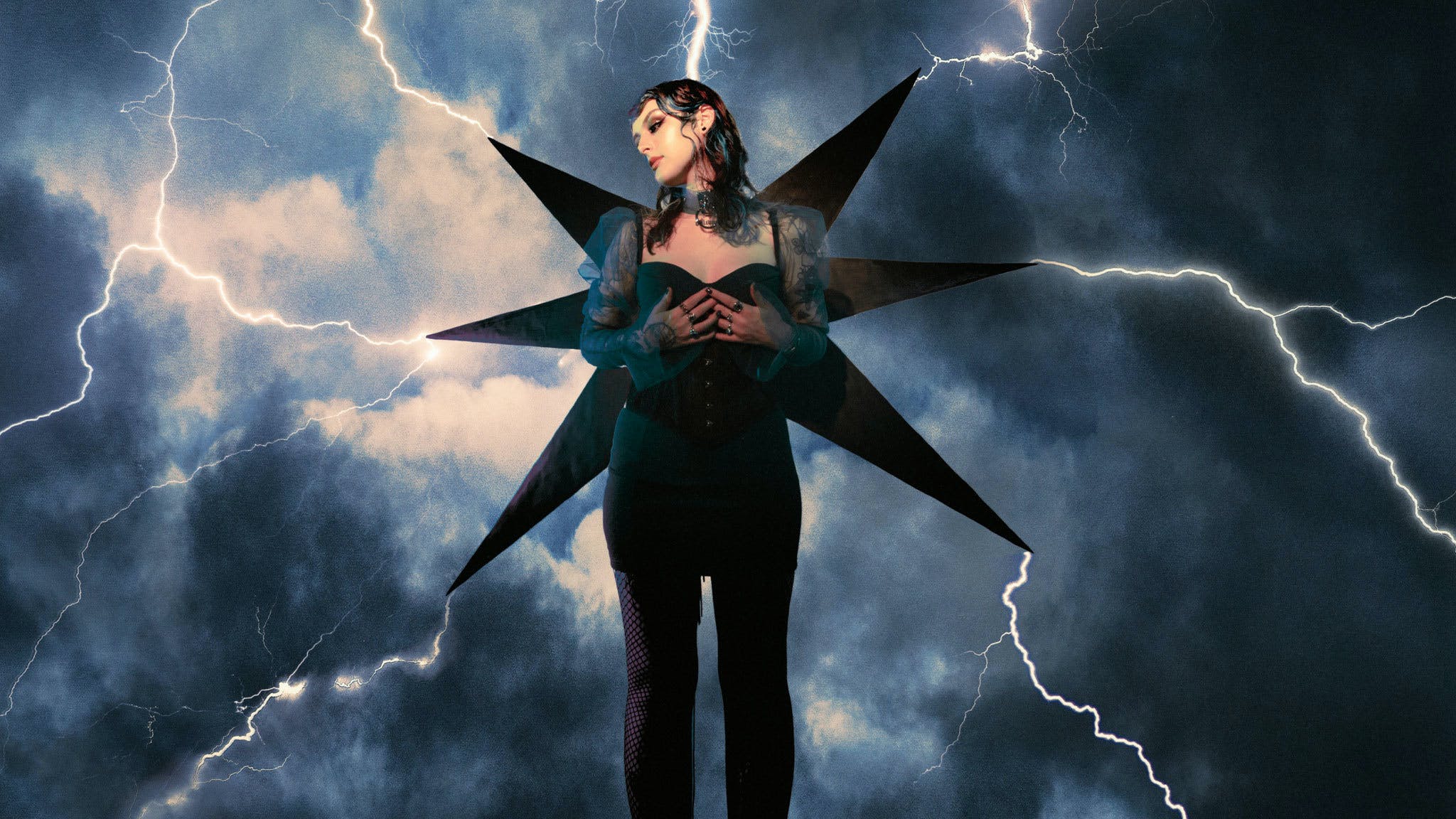 McKenzie Ellis – better known by her musical alter ego MOTHICA – acquainted herself with the rock world last year when her cover of Bring Me The Horizon hit Can You Feel My Heart? gained serious momentum online. An alt.pop artist whose aesthetic leans heavily on the gothic overtones of her heroes in My Chemical Romance, the 27-year-old has been releasing music since the age of 18, but it’s only in the past couple of years that her lifelong love of rock – particularly the emo scene – has truly revealed itself in her output. Now set to release guitar-driven new album Nocturnal – out July 1 via Heavy Heart Records, MOTHICA’s own imprint with Rise/BMG – McKenzie has the warm reception which greeted her Bring Me cover to thank for giving her the confidence to let that love of rock shine.

“I’ve always been a solo artist – I’ve never been in a band,” McKenzie begins. “When I was growing up, music like Bring Me The Horizon only came from bands, so when I started out I gravitated more towards the electronic and EDM side of things. But when I did that cover and people really liked it, it gave me the belief that I could make guitar music. Previously, I wouldn’t have gone there just out of respect for rock as a genre, but now I have a whole album that leans into that sound! With Nocturnal, I wanted to make something that still felt like me, but went to those heavier places.”

Ask McKenzie to list her influences and, along with Bring Me The Horizon and MCR, she also cites rock visionaries Linkin Park and Poppy among her favourite artists. Something each of those acts has in common is their consistent shape-shifting, both sonically and visually, and it’s that “genre-meshing,” as McKenzie calls it, which is a quality she’s always been drawn to. The task with Nocturnal was to pay homage to that spirit, and create a record that she says “explores the music I grew up on, but made how I would do it in 2022”.

Written through a “pop-lens” but with a determination to get as many rock and metal elements in as possible, Nocturnal consistently blends and jumps between MOTHICA’s alt.pop and electronica roots, and her love of guitars. The song Blood, for instance, has parts that lean on both modern metalcore and clean-cut pop, and comes complete with “twangy guitars and a sludgy chorus.” The title-track and Back Of My Mind, meanwhile, recall MOTHICA’s cover of Can You Feel My Heart?, as their dark electro-pop swells around McKenzie’s characterful vocals, with the former even coming complete with a mini breakdown at its climax.

Throughout Nocturnal, the sounds McKenzie conjures, both in their softer and heavier moments, evoke a sense of darkness well in keeping with the rockers who inspired the record’s inception, and it’s something mirrored in the album’s visuals and lyrical themes. MOTHICA has, McKenzie says, always been envisioned as a project that’s about more than just the music, and Nocturnal is where her grand vision has really come to life.

“From the beginning, MOTHICA has always been my space to apply my graphic design and visual background, as well as the music,” she explains. “At one point, I actually wanted to work for other artists doing their marketing and graphic design, but working for clients is scary (laughs), so I thought I’d see how I got on doing it as my own little project. The singing side of things actually doesn’t come as naturally to me as the fantasy worlds and narrative creation side of things do, which feeds into this idea that MOTHICA is more of an all-encompassing thing than it is something that’s just a music career. That’s why it’s so great having my own imprint on Rise – I’ve been able to scale things up and fully realise my vision for what MOTHICA can be.”

As for the message of her music, the fantasy worlds and characters – some of which you hear from on Nocturnal – may allow McKenzie’s more whimsical side to shine, but there’s a serious undercurrent to MOTHICA’s songs. A survivor of domestic abuse, sexual assault and addiction, the 17 tracks that make up Nocturnal see her laying her soul bare, and doing so with unflinching honesty. From riffy revenge song Reckoning to tender diary entry REM, which sees McKenzie reflect on her PTSD, each song on Nocturnal is an open-book insight into one person’s triumph in the face of devastating trauma.

“This album is about me: my story, my journey, my trauma, and the addiction and assault I experienced,” McKenzie says. “I’ve put my heart into these songs and, thankfully, I’m in a better place now – this album was the first I’ve written while being sober and in a wonderful relationship – so this record was written from a perspective of me looking back on my past and doing so with a really healthy dynamic, which is something I’m not used to. Having been through alcoholism, toxic relationships and suicidal thoughts, it almost felt too good to be true to be writing from a better place, but it was nice to be able to present things with a bit of a silver lining.”

Speaking to Kerrang! with an air of positivity, passion for her project and a genuine excitement at Nocturnal’s impending release, McKenzie’s present circumstances – a stable personal life and a thriving musical career – are a world away from the despair that engulfed her past. But she bears the scars of those experiences proudly in her music, and it’s hearing those stories told with the honesty and vibrancy that characterise Nocturnal that makes MOTHICA such a compelling addition to rock’s ranks. There’s no guarantee the guitars will stick around (“I’m sure the next album will sound completely different to this one,” she enthuses), but regardless of where her music goes next, it’s McKenzie’s message of hope that forms the core of MOTHICA, and you can bet that it’s here to stay.

“Nocturnal is an empowering record,” McKenzie concludes. “It’s about owning the darkness, owning the night. It’s about knowing that you’ll never be completely healed and that you’ll always carry some darkness with you, but that it can be a beautiful, powerful thing. You will come out of the other side, and you will wake up and see morning again.”

Viral alt.pop star MOTHICA’s second album is dark and intriguing but a little too sprawling…

MOTHICA has unveiled two new songs, BEDTIME STORIES and BLOOD, to coincide with the announcement of her new album Nocturnal.

MOTHICA unveils new single Sensitive: “I wanted to make the most upbeat and aggressive song about being an introvert”

Watch the video for Sensitive, the second single from MOTHICA’s upcoming album Nocturnal.

From MOTHICA to Scruffy Bear: Sophie K on the new music you need to hear now

Kerrang! Radio host Sophie K brings you the new artists you need to check out now, including MOTHICA, Scene Queen and Scruffy Bear…

MOTHICA has shared a brand-new single, Casualty, that is as impactful as it is catchy.