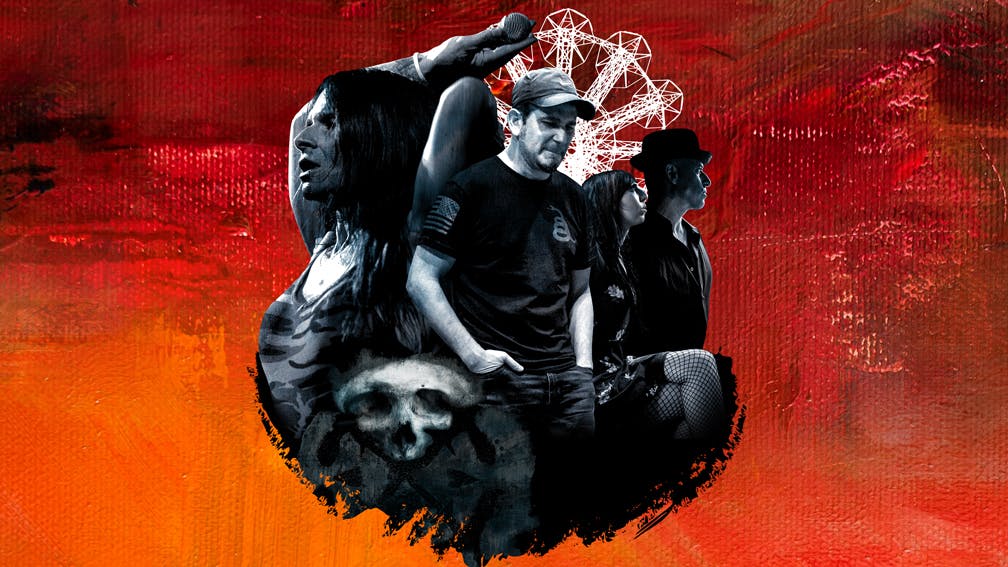 Perhaps the biggest praise that immediately springs to mind when considering The Sound Of Scars is that it’s not the film you might expect it to be. That movie would have presented an impassioned – and entirely justified – argument stating that Life Of Agony deserve more recognition as one of the best bands to have emerged in the ’90s. This stunning documentary may well serve that purpose as an essential introduction to the unconverted, but it will likely do much more. The Sound Of Scars is far, far removed from the by-now standard band documentary. You know the kind: a procession of talking heads in sunglasses going, ‘They were a great band – they deserved to be massive!’ Archive footage. Band member says, ‘We were fucking crazy back then, maaan.’ Repeat. This is not that.

Credit must be given to The Sound Of Scars director Leigh Brooks for aspiring to tell a different story. This is a film not about the making of Life Of Agony’s incredible music, but rather the making of the people that made phenomenal songs like River Runs Red, How It Would Be and Weeds. What would be a major focus of other films – the band imploding just as they seemed destined for a major breakthrough; reunions and re-reunions – are all present and correct, and hit hard, too. But across its 90 minutes, TSOS is altogether more preoccupied with the inner lives of its subjects.

Some aspects of this story are well-known, most notably that of singer Mina Caputo’s journey – now 10 years on since she came out as transgender, after years of living by the name of Keith Caputo.

“There was no Keith,” she reflects at one point. “Keith was a lie, a social construct, Keith was an idea to get me out of the abusive situation I was in at the time.”

Quite frankly, you wouldn’t want to meet the person who isn’t moved by Mina’s bravery, or the details of her personal history: as a child being found in a playpen beside her OD’d parents, her mother dead. The seeds of mistrust that came from being raised by her grandmother, all the while believing she was her mother. Years of physical and emotional abuse. The trauma of having to pull needles out of her father’s arm. A lifetime of trying to find her true identity. There are moments in this film that will live long in the memory: Mina caressing a lock of hair of the mother she never knew; her recollection of having to identify her father’s body for the police after his eventual fatal overdose. In moments such as these, The Sound Of Scars attains an intimacy beyond the remit of even the most powerful music documentaries.

The same holds true for the altogether more undocumented lives of the other members of the band, guitarist Joey Z and bassist Alan Robert – ex-drummer Sal Abruscato does not figure, but current drummer Veronica Bellino is present to add insight. At every turn, the film strives for depth. Look no further than Alan not only detailing his lifelong battle with depression but also going as far as examining the cruel randomness of it – his parents on hand to express their own surprise that both their children battled such demons despite having done everything they could to ensure a happy upbringing. Joey Z’s story of dealing with his father’s alcoholism as a child, meanwhile, is harrowing, but eclipsed by their reconciliation on screen as older men – a son telling his father that he is forgiven. So often music documentaries revel only in despair; The Sound Of Scars is concerned with the complexity of what it means to heal.

All of this is not to say the film doesn’t serve as a magnificent testimonial to the power of LOA’s music. It does. Among its highlights include a stunning performance of My Mind Is Dangerous and some truly terrifying footage of the good ol’ tooth-dislodging, health and safety-less days of Brooklyn mosh-pits in the early ’90s. Truth be told, an entire documentary could be made just of montages of Joey Z’s melted-facial expressions onstage. It’s just that this film offers so much more than that.

From 1993 right through to the present day, the blunt force candour of Life Of Agony’s lyrics have established a relationship with fans that – as explored in the film towards the end – burns with a remarkable intensity. It should come as no surprise that this film is every bit as unflinching. Much more than documenting the music of Life Of Agony, The Sound Of Scars is about family and memory – of years lost, and lifetimes gained.

Read this: Mina Caputo: "I have more fearlessness than a billion fucking men"

Life Is Proud: Life Of Agony's Mina Caputo: “I don’t like being called transgender or transsexual… I’m a beautiful human being”

Pioneering Life Of Agony singer Mina Caputo opens up about letting go of the past, spirituality, and the Pride movement during the third instalment of Kerrang!’s Life Is Proud campaign.

Mina Caputo: "I Have More Fearlessness Than A Billion F*cking Men"

Life Of Agony vocalist Mina Caputo reflects on years of turmoil and tragedy, and how her bravery in the face of it all has been an inspiration to all...

Life Of Agony Release New Video For Lay Down

Watch Life Of Agony's new video for Lay Down

“My Fear Caused An Obsession”: Alan Robert On Art, Horror And The Future Of Life Of Agony

The bassist and lyricist takes us inside The Beauty Of Horror.