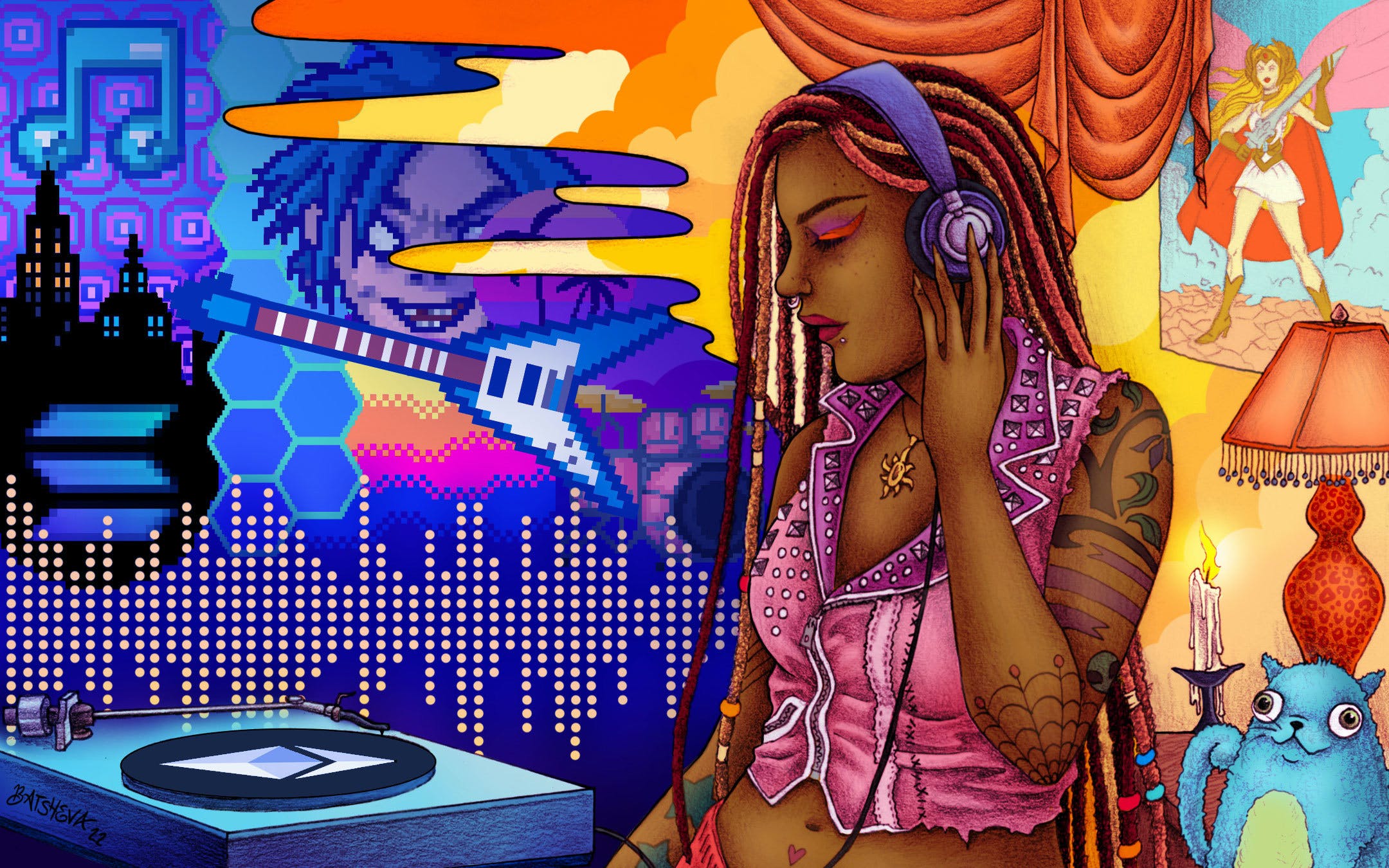 You've heard about NFTs, right? Those badly drawn JPEGs that people spend hundreds and thousands of pounds on? Yeah, that's them. And while the mere existence of NFTs continues to send millions of social media users into ranting meltdowns, you shouldn't always follow the opinions of people on Twitter. You see, beyond the really shoddy stuff that makes up the majority of the landscape right now, there’s an awful lot of technology involved that has huge potential for musicians, and actually, might get you excited.

Allow us to give you a quick explanation of what NFTs actually are: they’re non-fungible tokens. ‘Non-fungible’ means it has value but is also a one-off. So, where a £5 note can be replaced by another fiver and there’s not really any difference (they’re fungible), an NFT is more like swapping a house for another house, or a painting for another painting – it can’t really be matched up perfectly.

From a technological point of view, it’s a crypto token that you create using a blockchain (typically Ethereum or Solana, but there are many others). This token holds data, a little like a zip file. The data inside might be an asset of some kind (like a visual, a piece of music, a video) along with information about which wallet owns it, who sent it to the wallet, and code that allows access to the asset (similar to a URL link).

The purchase mainly concerns the URL-ish code, as opposed to the asset (the asset can be changed by the site that hosts it, should they decide to). So given that the image isn’t actually what you own, screenshotting and sharing it on socials isn’t particularly important. Oh and while we’re at it, NFTs aren’t an art form. That’s simply not the point of them.

The fact that NFTs are stored on a blockchain means they’re secure, in that they’re very hard to tamper with and access without being the true owner. In many cases blockchains are also decentralised. The former of these is useful in terms of making sure nobody steals it or tries to create a copy, the latter is an ideological benefit for some people, but isn’t completely essential.

While most NFTs are about as useful as a digital trading card at the moment, there are examples of musicians using NFTs to do something a little bit different. Metal titans Avenged Sevenfold, for instance, released 101 NFTs and later revealed that the seven with ‘gold eyes’ will include a perk: you get a meet and greet with the band at “any show you go to, forever”. Their NFTs aren’t just photos either, they include unreleased music and exclusive artwork.

The band then launched the Deathbats Club, which is a “first of its kind” blockchain community. To be part of the club, fans must own one of the 10,000 Deathbats, which are NFTs made on the Ethereum blockchain. Given the limited supply, it’s likely that fans who buy them early will be able to sell them on for a profit down the line. As with Avenged's first NFT drop, owning one of these NFTs will come with a range of perks and utilities including merch discounts, private merch sales, giveaways and more. Some rare perks will also be attached to certain Deathbats, including "free A7X shows for life". Ultimately it’s like an exclusive fan club, powered by the blockchain, with the initial sales (and probably a percentage of future NFT sales) helping the band financially.

In fact, NFTs can easily include things like solos, riffs, sections of songs, lyrics or exclusive videos (the NBA have made over $500 million through selling NFT videos). Linkin Park’s Mike Shinoda also released an NFT mixtape using the sustainable blockchain Tezos. Both of these projects sold out.

Alt-popstar Grimes’ recent NFT campaign landed her $6 million – a huge sum. According to this Spotify royalties calculator, you’d need just over 2.5 billion streams to get the same return. So if you care about artists, and they’re earning more, that’s nice for them, right? Of course. And if an artist does start earning millions from NFTs, it can remove their reliance on a major label business structure, as they’d be financially comfortable enough to release records independently and on their own terms. So you’d get more of the artists’ creative vision, they receive more of the proceeds, and they actually own the masters to their own songs.

But there are more reasons to care about NFTs than just helping your favourite artist pocket a bit of cash – you could actually generate income for yourself. When the artist sets up an NFT to sell, they’re able to code in specific clauses (like with contracts) that mean they receive royalties each time the NFT is sold on, but they could also code in something that gives the previous owner a percentage. So you could, in theory, buy an NFT from your favourite band, sell it, and pocket a portion of its future earnings.

The potential within blockchain’s security is also pretty massive for the music industry. While a little technologically advanced at the moment, it’s possible that gig tickets could be issued as NFTs. This would make it basically impossible to duplicate a ticket, while still allowing the buyer a chance to sell it. This could make ticket touting a thing of the past, as the original creator of the NFT ticket could add certain rules to limit resell prices. Of course you can still accidentally buy a fake ticket, so be careful there, future you!

Amidst all of these exciting possibilities, however, there are a couple of potentials spanners that could fall in the works. It's still all a little new and uncertain, so legal disputes could come up in the real world – mostly because virtually no laws account for NFTs at the moment. In the crypto world, much of the risk comes around hacks and malfunctions in the blockchain (though rare, they can happen).

A recent example is CryptoBatz, Ozzy Osbourne’s 9,666 NFT “digital bats”. In this case, the people behind CryptoBatz changed their URL but they didn’t delete tweets pointing to the old one, so scammers gained control of the original URL and directed people to a fake Discord –which they used to get information about users' wallets.

There’s also the human error side of things, like people forgetting their wallet passcodes or accidentally putting the numbers in wrong and selling a NFT at a 99 per cent discount, as this person recently did. There is also an environmental impact due to the energy that blockchains take to operate. However, this is a little contentious as vinyl isn’t eco-friendly either, and some blockchains are pretty sustainable (including Tezos). Finally, some might argue that this is all a little alienating for less digital-savvy people, which is true at the moment, and some mention not being able to replicate nice physical memorabilia like prints and posters (although there’s nothing stopping artists from making these either).

So the next time you see some crypto bro banging on about their NFT of a pigeon with a basketball, don’t think, ‘You idiot!' Think, ‘Ah, one day that technology might solve a lot of the problems within music' …and also that they’re an idiot, if that’s something you like to do.