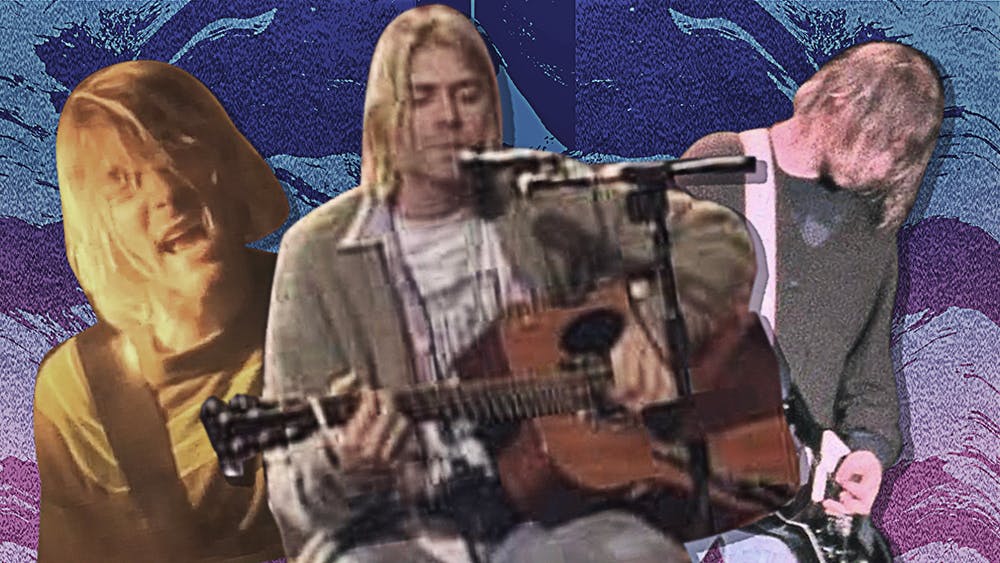 Because you can never have too much Nirvana, we’ve immersed ourselves in the myriad promos hosted on Nirvana.com – most of the 45 clips are live performances, to be fair – to bring you a potted visual history of the grunge icons' career. Here, then, is the definitive list of their videos…

The first of two videos for In Bloom was filmed in 1990 for the Sub Pop Video Network Program, released on the humble VHS tape (ask your grandparents). Featuring drummer Chad Channing, this clip features the band mucking about in New York City, loading and unloading their van, and Kurt Cobain buying a hot dog from a street vendor while sporting a creepy plastic mask. Keep a close eye on bassist Krist Novoselic’s locks during the clip; they were apparently shaved off during the second day of filming as atonement for a poor show at the Pyramid. What the hell happened that night to warrant such a drastic haircut?

9. Territorial Pissings (Live At The Paramount)

Filmed during the band’s performance at Seattle’s Paramount Theatre on Halloween in 1991, this entire set has the distinction of being the only Nirvana concert to be recorded on the 16mm film format. The song – which features Krist’s, um, spirited vocal snippet of Get Together by The Youngbloods – captures the band in full-flight in crisp definition.

The last song recorded before Kurt’s death, the song was released as a promotional single for the band’s self-titled 2002 greatest hits album. Pieced together from grainy live footage and personal video archives by director Chris Hafner – the chap responsible for Aerosmith’s video for I Don't Want To Miss A Thing and 2Pac’s Changes – serves as a fitting tribute to the late musician.

The video for the band’s second Nevermind single begins with the chilling image of a gun floating in a swimming pool. Directed by Kevin Kerslake and filmed two days before the band left the U.S. for a tour of Australia, the video features footage captured by the band in Hollywood and projected onto the walls of the studio. During the clip, Nirvana remain largely obscured by sheets of water, while a dog sporting an Elizabethan collar ambles about their feet. With a large chandelier on set, Kurt does what any right-minded person would do and swings about like a hero in thrift store attire. One of the band’s more abstract videos, all told.

In the run-up to Nirvana’s Reading Festival set on August 30, 1992, the band were subject to much press scrutiny, with rumours that Kurt was unfit to perform at the final night of the festival. Arriving onstage onstage in a wheelchair wearing a hospital gown and a blonde fright wig, the frontman grasped at the mic and sang a line from Bette Midler’s The Rose before falling to the floor. The joke was on us, as the band then kicked off their now-legendary set with this incendiary version of the Nevermind classic.

5. About A Girl (MTV Unplugged)

This stripped back version of a "jangly R.E.M.-type pop song" – Kurt's words, not ours – formed part of the band’s iconic Unplugged performance, filmed at Sony Music Studios in New York City on November 18, 1993. Directed by Beth McCarthy-Miller – whose credits include Saturday Night Live and 30 Rock – capture the band in a relaxed setting on a stage decorated with flowers and candles.

This cheap and cheerful video (read: there was no particular concept) was made to promote the 1992 compilation Incesticide. It begins with Kurt's baby daughter Frances Bean dancing (albeit with the help of her father, hidden behind a sheet of cardboard) and the band performing the track in his garage. Dave Grohl drums in the video, but the track was originally recorded with Mudhoney’s Dan Peters, who made one appearance with the band in 1990, at Seattle’s Motor Sports International Garage. Fun fact: Kurt's ripped red and black striped jumper was a gift from his wife Courtney Love, who bought the garment from a fan in Belfast.

It all started with a simple advert. “Nirvana needs you to appear in their upcoming music video, Smells Like Teen Spirit. You should be 18-25 years old and adopt a high school persona, ie preppy, punk, nerd, jock… No clothing with name brands or logos please! Be prepared to stay for several hours. Come support Nirvana and have a great time!”

With a budget of an estimated $50,000, this iconic video was filmed on a soundstage at GMT Studios in Culver City on August 17, 1991, and features the band performing the song in a high school gym, which quickly descends into anarchy.

“What happened in the video wasn't even supposed to happen,” remembers Fear Factory vocalist Burton C. Bell, who attended the shoot as an extra. “The audience just went nuts.”

It was director Samuel Bayer’s first music video, who during an interview for Classic Albums – Nirvana: Nevermind, remarked he most likely got the job because his showreel stood out from the pile. But hang on, he’s not bragging. “Nirvana hired me because my reel was so bad. It was a punk and cool thing to do. ‘Let’s hire this really crap director to do this video and we’ll get something kind of… not corporate.”

That said, the video’s success led to work with Green Day and My Chemical Romance, ads for Nike and Coca-Cola and the 2010 remake of A Nightmare On Elm Street.

“Next, ladies and gentlemen, we have three fine young men from Seattle. They’re coming, hold on, they’re coming. They’re thoroughly alright and decent fellows… with their hit single, In Bloom, here they are, Nirvana!”

Struggling to speak over a screaming teenage audience, a man in a suit – played by Doug Llewelyn, one-time host of The People's Court – introduces the band against the backdrop of a ’60s-style light entertainment show a la The Ed Sullivan Show. The fun video was Kurt;s reaction to people taking the band so seriously. “I wanted to fuck off and show them that we have a humorous side to us,” said the frontman. The Kerslake-directed video – which scooped an award for Best Alternative Video at the MTV Video Music Awards in 1993 – sees the trio trash their equipment at the climax of the song.

Nirvana’s video for the first single from In Utero was originally going to be directed by Kevin Kerslake. The unsettling clip –based on a treatment by Kurt – was helmed by Dutch photographer Anton Corbijn, who’d also directed videos for U2, Depeche Mode and Danzig.

“When Kurt presented his very precisely thought-out ideas, there was no way to ignore that quality and not to use them,” Anton told Spin. “It is extremely rare to encounter musicians with such well-expressed and original ideas for their own work.”

It’s original, alright. The video features a field of poppies, an old man in a Santa hat climbing onto a crucifix, a young child dressed in Klan robes grasping for toy foetuses hanging from a tree, and a ‘skinned’ obese woman with black angel wings. There’s some light relief, too. A murder of mechanical crows mime along to parts of the song, while the trio perform the track with tongues planted firmly in cheek. Towards the end of the clip, the band sit around in a brightly lit bedroom, while Kurt messes about in a rocking chair and eventually falls flat on his face.

The video was filmed in colour, transferred to black and white, and the footage was painstakingly hand-tinted at a Mexican studio, giving the footage an old-school Hollywood feel.

And as for the six-year-old actress Kelsey Rohr? She was reunited with Dave Grohl in 2016. “Today reminded me that I peaked at six years old but I was the most badass kid on the playground,” she wrote in an Instagram post. “Today was the absolute coolest. Or in Dave's words, seeing each other today was an ‘historic moment’! What a legend.”

Given the surreal yet unsettling scenes, it’s a wonder this iconic video was shown on MTV at all.