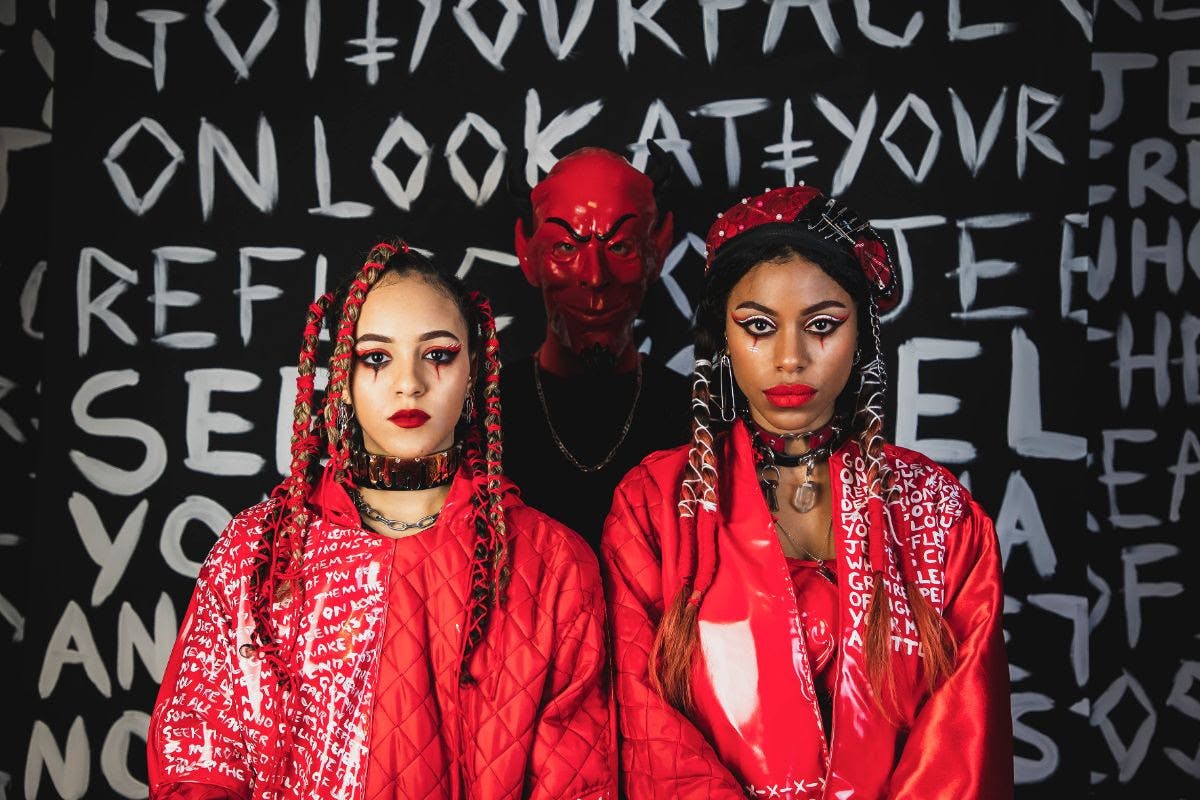 As album titles go, Who Are The Girls? is a perfect encapsulation of Nova Twins’ attitude: audacious, in your face, and in no way asking for permission. Whether you’ve already been stunned by their irrepressible live presence when sharing stages with Prophets Of Rage and Skunk Anansie, or you’re intrigued by their kaleidoscopic rave-punk, it only takes a few seconds of listening to their upcoming debut album to know exactly what Amy Love and Georgia South are about.

You see, Nova Twins were born to make noise. Raised in Lewisham to musician parents, Georgia was taught how to play piano as a child, before gravitating towards the bigger, badder sounds of the bass at 12 years old. “The piano just wasn’t loud enough,” grins Georgia. “It didn’t give me that heavy energy or experience that I was after. Then I became obsessed with experimenting with the sounds I heard in hip-hop and electronic music.”

Essex-born guitarist and singer Amy met her future ally through Georgia’s older brother and the pre-Nova Twins duo would practice together as Georgia’s dad taught Amy guitar. At college, Amy immersed herself in rock and punk, particularly the multi-genre music of Betty Davis – a fierce ‘70s musician who is only now getting her dues. “She was a big inspiration. I love the power and the unapologetic nature of her tone and her attitude,” explains Amy, who also cites the flamboyancy of the New York Dolls as a key influence. “Together we used to listen to Missy Elliott and N*E*R*D. All of that created something a bit off-centre.”

Although the pair were always close, it was only after gigging in different bands that they decided to join forces in 2015. One self-titled EP and several years of honing their hooks on tour later, Who Are The Girls? brings their combustible chemistry into focus with explosive results. There are personal anthems (Vortex), unexpected moments of vulnerability (Ivory Tower) and takedowns levelled at catcallers (Bullet). So impressed was Jason Aalon Butler with the duo’s songs when he saw them at Brooklyn’s Afropunk festival in 2018, that the FEVER 333 frontman is releasing Who Are The Girls? as the first full-length on his label-of-sorts, 333 Wreckords Crew.

“He called us after Afropunk to say, ‘I’ve seen what you do, I get it and I’m here if you need me,’” recalls Amy. “’Then later [with 333 Wreckords Crew] he said, ‘Let’s do this.’ That was special, because I’ve never seen an artist open their arms like that and happily share their space with us.”

“It’s difficult for women; it’s especially difficult as women of colour in the rock game,” Amy continues, matter-of-factly. “There hasn’t really been a big one since Skin, in Skunk Anansie, which is very telling. And they’re out there. They’re just not shown anywhere, therefore people don’t feel like they can do it.”

“People have assumed that we must be R&B singers,” says Georgia, recounting frustrating gig experiences. “Or maybe they think we’re somebody’s girlfriend, because they don’t believe we could possibly be a band.” And they both let out a collective groan recalling an absurd question that is sadly familiar among female musicians: ‘Do you write your own songs?’

Both Amy and Georgia are keen to emphasise that they perceive attitudes to be improving and for every negative comment, there have been many others voicing support. Besides, any naysayers usually shut their mouths once they plug in and let their tunes rip. But what keeps them pushing when things get rough?

“We’re lucky to be in this together,” smiles Georgia. “Amy is really good at chatting through things if I’m stressed and when she gets onstage she lights up, which is really inspiring.”

“I’m an only child, so Georgia really is the sister I used to cry for,” says Amy as she stifles an embarrassed laugh. “We’re on this journey together. It’s a ride or die situation.”

READ THIS: 20 era-defining MySpace bands: Where are they now?

It is that unbreakable bond at their core that fuels Nova Twins. Their combined energies and refusal to keep quiet has allowed them to take on anything in their path, whether blasting away doubters or showing around 20,000 French metalheads how to party when they played Hellfest last year. As we speak, they’re priming themselves for their February UK tour – as well as a few international plans they’re keeping under wraps. Above all else, they want to perpetuate the feeling of empowerment and inclusion that their music gives them.

“We want to see the punks and hip-hop kids rubbing shoulders. We’re starting to see more diversity of race and gender at our shows,” Amy enthuses. “We want to spread that message and team up with other musicians. We want to shake things up.”

Only a fool would stand in their way.

Nova Twins have been nominated for the Mercury Prize