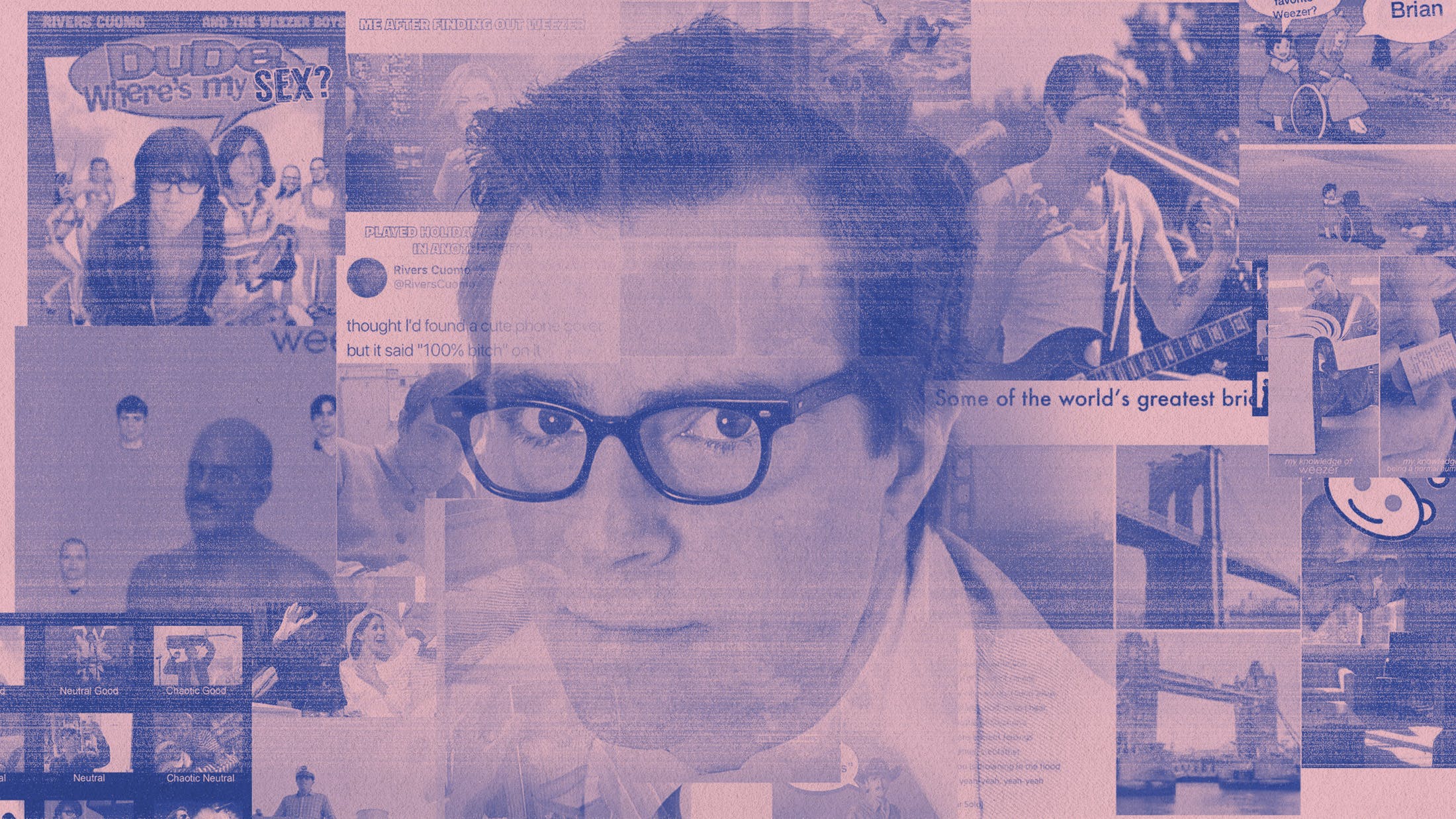 Weezer frontman Rivers Cuomo just might be the most interesting man in music. On one hand he’s a small, quiet, awkward, geeky bundle of neuroses; yet on another, he’s a rock god, a stadium-filling, solo-shredding, lightning-Stratted riff machine.

He’s written songs and albums that sit comfortably in the pantheon of all-time greats, and some that everyone is best off pretending never happened. Occasionally there’ll be a year or so where it all goes weird and the band are suddenly an eight-piece and he claims he’s a rapper. Lots of his lyrics exist in a weird space where you can’t be certain how sincere or he’s being, and how many layers of irony or meta-ness he’s employing. How much irony is there in I Love The USA (his first song to ever employ profanity, a repeated 'Fuck yeah, this place is great')? What was the thought process during the creation of I Can’t Stop Partying? Are Weezer the only band to release a single (Back To The Shack) apologising for being a bit crap for the few years preceding it?

And he’s kind of the world’s greatest troll. When people repeatedly got Weezer and Wheatus confused in interviews, Weezer started playing Teenage Dirtbag at shows. When a fan campaign to get Weezer to cover Africa by Toto went viral, they did so, but not before covering another Toto hit, Rosanna, and releasing that, baffling and infuriating people just for fun before delivering the real thing.

As befitting a band whose video came bundled with Windows 95, Weezer were early adopters of the internet, and the four-year break between Pinkerton and the Green Album coincided with a huge increase in online fan activity. Forums were where the action was in those pre-social networking, dial-up days, and Weezer were on it from the get-go, thanks largely to Karl Koch, the band’s archivist, webmaster, official historian and unofficial fifth member. In the days when there was still a huge barrier between artist and fan, they did more than most bands to tear that down, with daily updates from tours, live photos from every show and videos from a lot of them, all in an era long before technology made such things easy. The music video for Photograph, from the Green Album, uses a lot of the type of footage they were putting up there, in (if memory serves) now-defunct formats like RealPlayer.

Rivers himself would post in the forums, supposedly sometimes doing so anonymously as well. These days he’s rumoured to anonymously post on the r/Weezer subreddit, and has (along with his wife) contributed thousands of entries to lyric annotation database Genius, some of which have shed light on the meanings behind his songs and some of which are deliberately baffling.

Nobody is better at Twitter than Rivers Cuomo. His account is a beautifully compelling, hilarious mix of the following:

– Perpetual self-aggrandising (“I rock.” “I’d say I’m up there with the greats.” “I like the Weezer.” “A humble legend.” “weezer is the most legendary band of this century.... in fact--dare i say it--of all time”)

– Weezer references (“DID ANYONE TRY THE FISH?!?!”, “I DONT CARE BOUT THAT” “Lol Canada border patrol just asked me if I had my hash pipe”)

– Total trolling of fans (see below that)

The most compelling thing he does, the most maddening, intriguing, confusing tweets, are the ones that seem deliberately intended to read like misposted DMs – non-sequiturs that are either replies to very personal messages or, more likely, tweets written to sound exactly like replies to very personal messages. They’re enigmatic, often sexual in nature, and assuming they’re intended to drive fans nuts, do exactly what they’re meant to.

If, say, a politician posted the tweet “I send you my wiener please respond” his career would be destroyed. When Rivers Cuomo does it, it’s all part of his mystique. They feel like a treat, a glimpse inside the private life of a rockstar, even though the odds that they’re real (Rivers is happily married) are slim to none.

It’s the little details about them – the emphasis on the word “any” in “Feel free to distract me ANY time! :)”, the “too” in “I find ways to spank myself too! It’s nice to know I’m not alone!” that make them raise so many more questions than they answer. He’s recently sent a few demands for “hand pics”, and come on, that’s intriguing as hell.

“Rivers Cuomo is the best thing on the internet” says Tash Goldstone, stand-up comedian and Rivers superfan. “Do other rockstars tweet about how useful vegetable spiralisers are? I don't think so. I just love the mystery behind his tweets. Are they his real thoughts? Is he tweeting random things he overhears? Is he parodying himself? The only reason I’m on the internet is so that one day Rivers Cuomo can like one of my posts. After that I will delete my account, go off grid and live in a field somewhere.”

He might be employing the same mastery of overheard conversations, brainfarts, brief thoughts, disconnected thinking and little catchy snippets of words to Twitter as he does to songwriting – many of his lyrics are pieced together from small phrases he scribbles down, matched together based on syllable count and cadence and pieced into vague stories.

Either way, Rivers Cuomo posting tweets like “I’m still thinking with my willy” is something to be applauded.

Post after post of weird, beautiful, hilarious in-jokey nonsense, increasingly strange, frequently deeply obscure or requiring very specific pop-culture knowledge, often appallingly Photoshopped. Is he creating any of them himself? Are they all reposts? How many of them would exist without his clear love for them, and the feedback loop that his reposting generates?

However it all fits together, his affection for the deeply silly world of Weezer memes is magnificent. “The Weezer meme market is extremely competitive” he wrote on Twitter. “I just don't have the skills to survive in an economy like this.” Has there ever been a more meta, self-aware, somehow simultaneously self-aggrandising and self-deprecating tweet? The man is a deadpan genius.

Rivers trolls his fans constantly, whether by making nonsensical claims about future plans (“We're going to be using live dolphins on the next tour”), or possibly, potentially, announcing the scrapping of the eagerly awaited Black Album in an offhand, I-already-told-you kind of way – the first people learned of it supposedly being spiked was “black album was canceled I said it in a interview a week ago”, which probably counts as gaslighting.

He keeps doing a thing at the moment where he insists that he is the same age as the Blue album. Like, that the album he made when he was 24 actually coincides with how old he is. It’s a physical and space-time impossibility, obviously, but it’s really funny: “Honored to be a part of this community as Weezer has been a big part of my life since the Blue album.”

Rivers Cuomo seems to know exactly the place he inhabits, both in the pop culture landscape in general and in the hearts and minds of Weezer fans. Deciding to use that to drive his fans as nuts as possible is, well, up to him. It’s all part of his eternally interesting weirdness. He is king of the internet, and long may he reign.