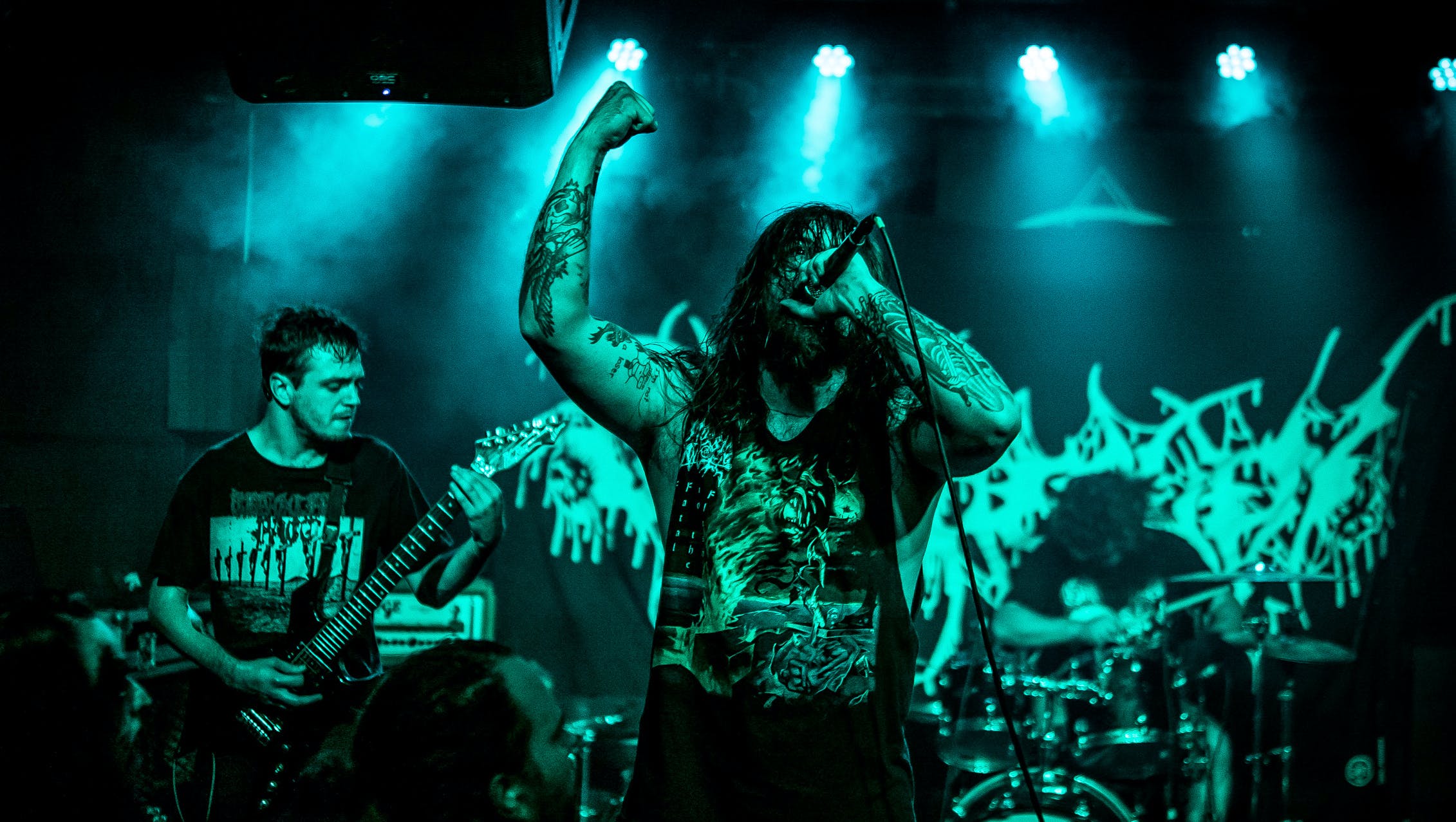 The crowd at Day Two of New York’s Metal Punk Deathfest is a mixed bag. The fans hanging around Brooklyn’s Saint Vitus Bar are a ragtag mixture: you've got your fashionably intense cultists with their patched black denim vests and Napoleon Dynamite-ish haircuts; your ghetto yetis in sleeveless shirts with intricate tattoos framed by patchy upper arm hair; and a few jerky-thin thrashers in white ringer tees who stomp into the pit and sway drunkenly out of it.

The afternoon’s dozen-plus bands similarly draw in scattered handfuls of fans using their unique skillsets – Slashers are hard and precise, Skullshitter are fast and have hilarious samples, and Left Cross sound like being run down with flaming steamroller.

But it’s Pennsylvania’s Outer Heaven that brings everyone together, and for good reason. Over the course of their thirty minute-long set, the band unloads a mixture of oozing, hateful death metal and raw live energy that sends the crowd into a frenzy. Heads bang, fists raise. The pit becomes a sweaty blur of knees and fists. And between every round of mold-fuzzy guitars and hoarse bellows, the audience erupts into unbridled screams of excitement.

It’s this mixture of mold-fuzzy riffage and undeniable power that has made Outer Heaven a mainstay of the East Coast death metal scene, and, one imagines, what got them noticed by Relapse Records, who are releasing the band’s debut studio album, Realms of Eternal Decay, later this month. Watching them pummel at Vitus, it’s refreshing to know that Outer Heaven deserve every bit of hype they’ve gotten – why shouldn’t a band who slays this hard be on everyone’s mind?

Onstage, Outer Heaven frontman Austin Haines wears an unusual relic: a Formulas Fatal to the Flesh sleeveless tee, repping Morbid Angel’s latter-day material which many old-school hipsters have since disowned. Outside the club, when we get ahold of him and guitarist Zak Carter, Austin smiles when asked about his choice of shirt.

“This is the 13th show in a row that I’ve worn it without washing it,” he says. “It sits on the dashboard of the van when we’re not playing shows and gets nice and roasted in the sun. Then I put it back on for the show. I want to see how long I can ride this out for.”

Obvious next question: what food would you say that shirt smells like, thirteen shows in?

“Sauerkraut,” says Zak with a hint of disgust.

It was announced that you signed with Relapse in February. How far along was the album by that point?

Zak Carter: It was 95 per cent done. There was half of one song that wasn’t locked down. [Relapse] asked, ‘Have you planned on booking any studio time?’ And we were like, ‘Yeah, we’re going in on Saturday.’

Austin Haines: When we started talking to Relapse, we had already decided that we were going to record the album. We hadn't locked down a deal yet. We were talking to a number of people. Nobody really had taken a bite at us yet. So we just decided to book the studio time and record the album, and when it was done, we’d try to shop it around again. Relapse came to us, wanted to talk to us officially. We signed a contract with them on a Wednesday, and were in the studio on Saturday. It was a crazy week.

You guys have done splits and EPs in the past – was there any pressure recording an album, or did you just stay the course?

AH: We always had a sound in particular that we were chasing, so that’s what we wanted to find. We did have a sound in mind, a Morbid kind of sound in terms of the production and songwriting. We have a lot of weirder stuff on the record that you don’t hear on the older material. You hear bands every other day who sound like Incantation. It’s not every single day that you have bands coming out of the woodwork worshipping Steve Tucker-era Morbid Angel. We feel like we’re bringing something new to the table, in terms of what’s out there.

What is that, in your opinion? What sets you apart from so many of the bands out there trying to sound old-school and brutal?

ZC: In my opinion, I try to make every riff count. When I’m writing a song, I don’t want there to be a single riff that’s just, ‘Oh, we’ll throw this in there.’ I want every single riff to hit, be catchy, have a hook.

AH: Some people are happy to piece together a couple of riffs. We really try to make every part count as much as we can. When we write, nobody’s afraid to speak out if a part isn’t hitting as hard as the rest of the song is.

Were there any darlings you had to kill? Great songs or riffs that just didn’t work and had to go?

AH: Oh man, we had two songs fully written that just did not vibe in the end. When we finished writing everything, we realized what the album was gonna be, and in the end, we decided that these two songs just don’t fit.

ZC: There are songs on the album with different vibes – grindier songs, more death metal songs – but I think you can totally tell that this is Outer Heaven.

AH: We’re always trying to put our spin on it. This album has been a long time coming, and we even pushed it off for a while in the hopes that we’d pick up a deal with someone. Into Hellfire, our single, that was supposed to be on the record, but we pulled it, recorded it, and put it out to say, 'This is what our record’s going to sound like. This is a preview more or less of what you can expect from us.' It definitely got us noticed.

It seems like you guys are good at using splits and EPs to pique interest. The four-way split with you guys, Gatecreeper, Homewrecker, and Scorched last year definitely got people’s attention.

AH: That was the intent of that split. We’d done a decent leg of Gatecreeper’s first US tour, and Homewrecker and Scorched we’ve known for a while. It was all just a response to a comment: someone commented beneath one of our posts, 'GATECREEPER OUTER HEAVEN SPLIT,' and someone else commented, 'GET HOMEWRECKER ON THAT.' This was before Scorched had a demo or anything, and the drummer from Homewrecker, also from Scorched, was like, 'Yo, my new band Scorched should get on this too.' It was a great way to show these bands off to each of our fanbases. And it did everything we wanted it to. It was good for everyone.

ZC: This is all about doing cool shit with your friends. It’s all for fun.

Along those lines, it’s cool that even after signing to a big metal label, you guys are still down to play an opening slot at a festival like this one.

AH: Oh, we’re not too cool for any show, anywhere, anytime. Honestly, we come from the Philadelphia area, which is a very DIY music scene. That’s what we came up doing back in the day, and that kind of ethic sticks with you.