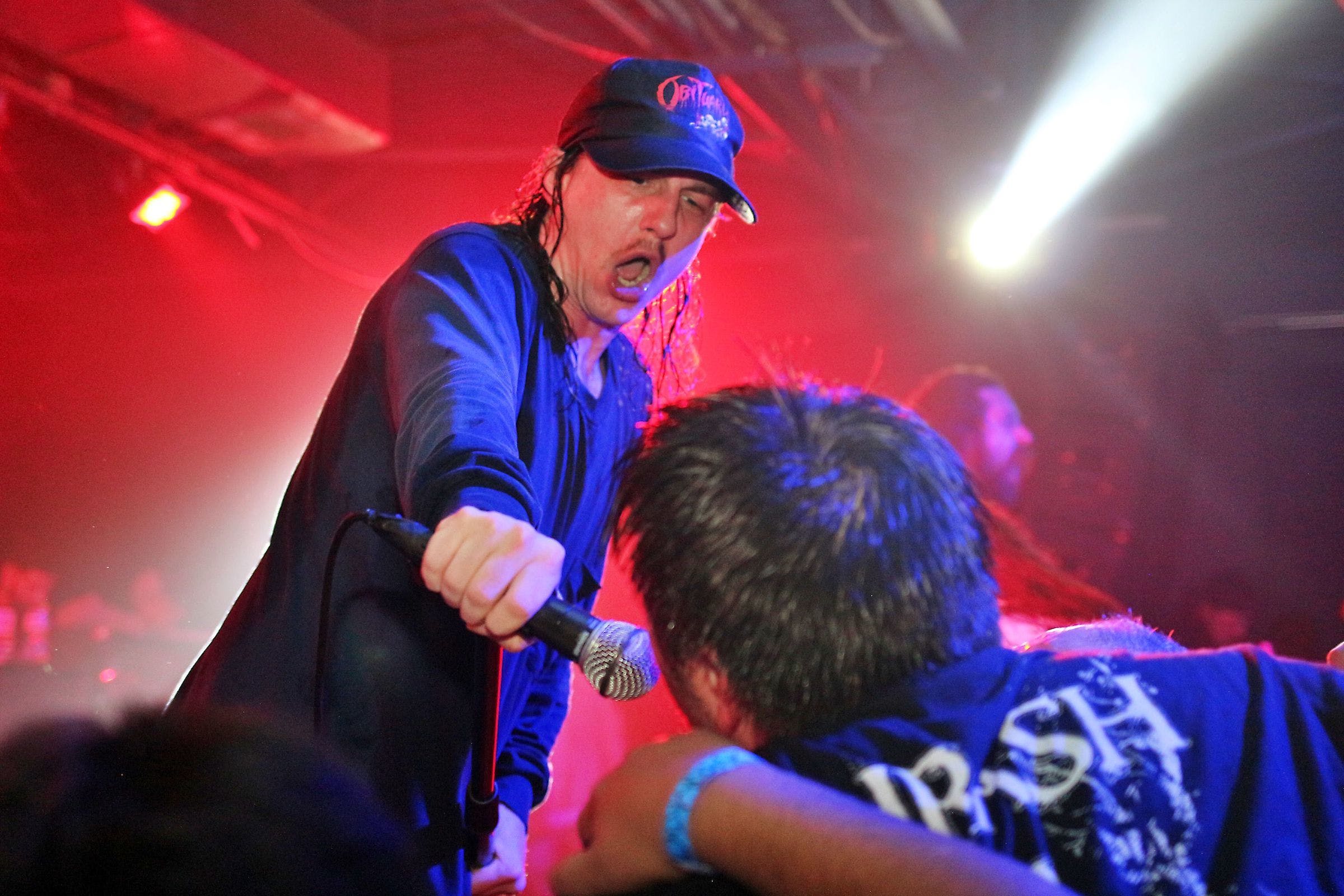 Thursday night, as Power Trip are set to hit the stage at the Paper Tiger in San Antonio, the lone star is hot, as the formerly hedonistic, once dechristianized Blackie Lawless once astutely pointed out. As rain cranks up the humidity, it’s almost too hot for singer Riley Gale, and if a Texan — and not just any Texan, but the singer of fucking Power Trip — thinks it’s too hot, that’s saying something. There’s a fatal attraction between him and San Antonio.

“I’ve only had to talk myself into finishing a set twice in my life, and they’ve both been in San Antonio,” he says in Paper Tiger’s green room across the street. “This town’s gonna kill me — that can be your lede.”

If Riley’s fighting for his will onstage, it sure doesn’t look like it. Power Trip don’t slouch, and they’re in fine form as always. Teasing with the intro to Ruination, they soon rip into Divine Apprehension, one of their oldest songs that still ignites a whole lotta stagediving. If anything, the heat makes them even more furious. Firing Squad feels like hurling towards heat death at beyond breakneck speed, Blake Ibanez and Nick Stewart breaking their own world records. Warbringer’s Carlos Cruz, filling in for drummer and Texas metalpunk legend Chris Ulsh, more than holds his own, providing formidable battery to slamfest Manifest Decimation. Kids aren’t fazed by the heat, going back and forth across the stage with that Texas vigor, and if anything, Riley is really impressed with the San Antonio crowd and how it ain’t just vanilla.

“There was a lot of women stagediving, and they had a lot of style. I saw four girls dive in a row dive and they all looked cool as shit when they did it. Fans here are really rabid…they’re still crazy after the show,” he said.

What’s wild for other bands’ shows feels normal for Power Trip shows. Jumping off balconies? That’s standard issue. Someone got too hurt in the pit? Hey, it happens. Sharing a bill with The Queen Diva Big Freedia? Yup, that went down. During Executioner’s Tax, though, something unusual for them happens: an earnest sing-a-long from the crowd, and they nearly dwarf Riley. It feels like watching Dashboard Confessional on MTV2 ages ago and being totally weirded out that the crowd was singing louder than Chris Carrabba. Kids yell, “The executioner’s here, and he’s ready to make you pay!” is a sign that not only that the kids know what’s up, but also that a “ready for the big time” band like Power Trip is really ready to take over. Riley himself is taken back a bit.

“I love playing that song because it kinda gives me a break, and people seem to really enjoy it. It’s our big hit, ya know,” he says. “I guess I know what it’s like to be in a metalcore band where people are singing along and moshing too.”

They find an ideal playing that song.

“Our songs seem to trigger two reactions, it’s either sing along and stagedive, or smack your best friend in the month,” Riley says. “You don’t see a song where you get both, and tonight was a little of both.”

This San Antonio show, as well as a show one in their native Dallas the next day as a part of the Trouble in Texas fest, are warmups for their upcoming European tour. San Antonio, like Power Trip themselves, is a city where hardcore and metal mosh and coexist with each other. The city’s metal side is more well-known, remaining a popular destination for big death metal acts. San Antonio once had its own Slayer, later known as SA Slayer. Mark Reale, leader of Riot, lived here later in his life and his headstone, in Holy Cross Cemetery, has Johnny the Seal on its backside. You know your city is metal as hell if you let the guy who made Swords and Tequila return to the Earth in it.

Yet there’s a healthy hardcore scene there too. Though San Antonio crossover crew Afflictive Nature did not play the show, Riley still shouts them out and says they are “the future of San Antonio” -- one hell of an endorsement. SAHC Veterans Bitter End are on the bill, though, and Bitter End and Power Trip go way, way back. Power Trip’s first show in San Antonio, also their first show outside of Dallas, was with them, back when Paper Tiger was a venue called the White Rabbit. They played the smaller room at the venue -- a sweatbox if there ever was one -- while Upon a Burning Body played the bigger stage. Late 2000s metalcore kids missed the real action. In 2019, Bitter End got a response almost as fervent as Power Trip’s, which simply ain’t easy.

But as the timeless proverb goes: real recognize real.

“I saw a bunch of early Bitter End shows, but more importantly, [vocalist] Daniel Rosen’s been a good friend, and he’s helped get me into music. Power Trip wouldn’t sound the way we sound without Bitter End and Iron Age. [They] showed me Age of Quarrel,” he said. Considering that Cro-Mags and NYHC in general are the cornerstone of Power Trip’s sound -- with their own Texan spin, of course -- that’s a pivotal moment for them.

And there’s another time where San Antonio gave Riley a major education. When he was a teenager, he went down to San Antonio to see Cave In, who were supporting Taking Back Sunday, because he won tickets through an email contest. Though he was temporarily embarrassed because he overlooked the fine print where he had to introduce TBS — he admits he still might know a couple songs from Tell All Your Friends — this show opened his eyes in some key ways.

“It was the first show I saw kids hardcore dancing, pitting to metalcore,” he said.

Power Trip ends with Crossbreaker as an a encore -- because you can’t just not play Crossbreaker -- and the kids don’t let up. They are only more vicious when Ibanez and Stewart slammed into its iconic riff, New York toughness battling Texas swing. When Riley first saw kids pitting to Cave In, he probably couldn’t have conceived that one day he would be the ringmaster. And he doesn’t take it for granted, even though (or especially) he says San Antonio might be his demise.

“As the world keeps getting hotter and we keep ignoring climate change, eventually, we’re just gonna be playing in 120 degree weather here and I’m just gonna have a heart attack and drop dead. That seems like the logical conclusion,” he says.

And knowing Power Trip, they may play their final show while literally melting into a burning Earth.