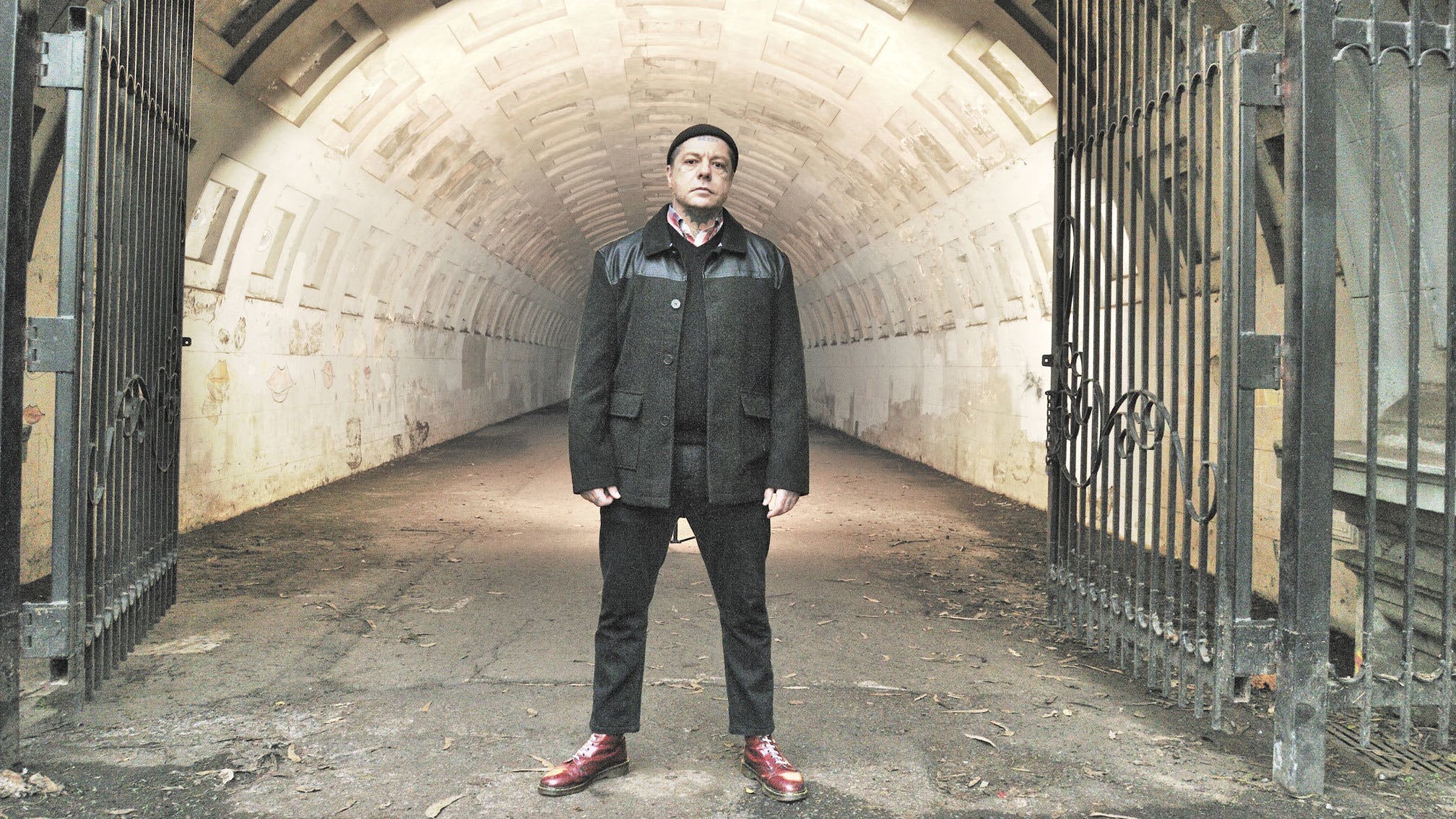 The catalyst for Lars Frederiksen’s new six-track EP, To Victory, came just days before the world went haywire. Booked by a friend to play a solo concert at Eli’s Mile High Club, in Oakland, the 50-year old rhythm guitarist and co-vocalist with Rancid, bandleader with Lars Frederiksen & The Bastards, and member of Old Firm Casuals, Oxley’s Midnight Runners, Stomper 98 and The Last Resort figured that he might manage to sell a 100 tickets for the 450-capacity Bay Area hall.

Instead, the show sold out within hours of going on sale.

To date, the appearance at Eli’s is Lars’ only show as a solo artist. After boarding a plane to New England in preparation for a brace of concerts in Boston supporting Dropkick Murphys (the two camps go way back; in 1999, Lars produced The Gang’s All Here, the group’s second LP), the following week the world went dark. Such was the startling change in temperature that he wondered whether he’d even be able to get back home to San Francisco.

At first, the guitarist didn’t greatly mind his life slowing down as it did. “I’ve spent 35 years making music without ever really stopping,” he says, acknowledging that his mother was by now reaching the end of her life. But as time ticked on, inevitably, music began to spring from this most prolific and technically precise of punk rock practitioners.

Today, Lars is speaking from his home in The City By The Bay. Kerrang! poses questions just 200 yards from the Underworld in Camden, at which, in 1995, Rancid played their first-ever British headline concert (not to mention one of more unhinged punk shows the city has ever seen). Out west it’s 10:20am and Lars has got the coffee on. As the band with which he made his name once said, ‘Let’s go!’

What was the thinking behind putting out a collection of songs as a solo artist?
“Until now I’d shied away from doing a Billy Bragg-style solo thing because I always thought, ‘I’m a band guy. I’m on a team.’ I never thought of myself as an individual artist. But it was on my bucket list as a pipe dream. There were three things that I never saw myself accomplishing: playing Saturday Night Live; playing the Oakland Coliseum, which is in our backyard; and playing Madison Square Garden. I’ve done two of those. The EP kind of fits into that category of being a nice idea that I thought would never actually happen.”

Rancid onstage at Madison Square Garden, though. Who woulda thunk it?
“That’s the pinnacle. You don’t get any bigger than that. What’s more, we played with the Misfits and The Damned [in 2019]. This is literally the biggest punk show that’s ever happened in the history of the world. My bucket list is kind of complete – Madison Square Garden was completely sold out. Fuck! How the fuck did this happen, right? So in that light I thought about doing something like this [EP] ’cause I wanted to have some fun. I wanted to do something different to keep myself moving and grooving in a way. I like to try different stuff, so I thought, ‘Maybe this is something I can bite off and try.’”

And then the world shut down just as you were getting going on the entire thing.
“Yes. Because of all the things I was going through in my personal life, I had started writing a fucking shit-ton of music that I was initially going to use for The Casuals. There were some certain songs, though, that weren’t going to fit in with any of the bands that I play with… and I thought they would maybe translate better with this Billy Bragg [style] thing. I called [studio owner] Michael Rosen up at some point during the pandemic and said, ‘Look, is your studio still up and running?’ And he said, ‘Well, I’ll have it running for you.’ We had to mask up and keep our distance, which was fine, and I went in there and recorded six songs – those were the ones that I thought were full-on complete and that I thought would translate in this way. Also, I love EPs. It suits my attention span. You get in and you get out.”

How different is Lars Frederiksen the 50-year-old professional musician from the wayward teenager you were when growing up in Campbell, California?
“Hmm. That’s a good fucking question. As we get older, things that we used to put importance on become unimportant. There are stories that I attached myself to as a kid, and these stories – whether they were true, or elaborated, or false – I attached myself to them as a way to survive. But the funny thing was is that I am always a spiritual person – I don’t mean religious, which is a completely different thing. I’m talking about spirituality, about the oceans and the trees. Perhaps it’s the Viking in me. It’s always been there. But as I’ve gotten older I’ve been presented with the same exact fucking situations over and over again. I was presented with the situation where I was getting divorced from my first wife and my brother died. Then, years later, I’m getting divorced from my second wife and my mother dies. And it’s the same kind of thing. What are you gonna do this time? Having had that rug pulled away from me, I realise that the things that I clung to in the past aren’t helping me. What’s more, they’re creating more division between me and other people. I’m not someone who wants separation; there’s too much separation already.”

Not just this, but themes of community and loyalty have been part of Rancid’s DNA for decades now.
“Right. Anyone who knows anything about Rancid knows that we’re about bringing people together. We don’t care if you’re black or white, or gay or straight, male or female or trans… Whatever the fuck it is, we don’t care. I don’t care. I hear people use the word ‘trauma’ and I think, ‘Well, my mom grew up Nazi occupied Denmark in World War II and saw her entire family get killed in front of her fucking face. That’s trauma.’ That’s real fucking trauma. So what you’re describing to me as your trauma – it’s hard for me to hear that word and understand why it’s being used… The way people are being coddled so much is why the pendulum is swinging so much. Just because you showed up doesn’t mean you get a fucking trophy. You show up because you made a fucking commitment… But, basically, pain is always going to be the way we grow as human beings. The speed bumps and hardships we experience is what we need to grow up and become the people that we are. If you’re trying to take away these experiences, you’re not giving people the chance to grow, or to learn. So, in answer to your question of how I’ve changed, I’m 50 years old and I’m over the petty shit.”

And what about the serious stuff?
“You know, the dystopian fucking future that punk rock has been warning you about for almost 50 fucking years? Well, it’s here. I understand ignorance is fucking bliss, but you can’t keep your eyes fucking shut forever.”

Would you describe your relationship with punk rock as the most enduring of your life?
“Yes.”

What is it about the music that has held your attention for so long?
“I think it’s the new bands and the energy of it all. It’s what’s kept me young, the energy and the spirit. A lot of these new bands come through and I find that I still identify with them. I’ve always felt a kinship with the music and the scene because, as I’ve always said, and I believe it to be true: you don’t find punk rock, punk rock finds you. It will always find you, no matter where you come from. It will somehow find you. And I fell into it at a very early age and I’m thankful I did.”

After failing to play with them as a solo artist last March, Rancid have just completed a North American tour with Dropkick Murphys. How did it go?
“It was weird. It was great to be back on the road, but things have changed – and were changing day to day. I’m just pleased we were able to finish the tour. One of the things that was different was that no-one was allowed backstage. We couldn’t visit the other bands [The Bronx also appeared on certain dates] on their buses or their backstage areas because we just had to concentrate on keeping the thing rolling, you know? But as a consequence of that, us as Rancid just got that much closer because we were the only people we could hang out with all day. We were with ourselves and that was fucking wonderful. We kind of came together in a way that we hadn’t in a decade at least. We’ve always been very close and very tight-knit, but for some reason we got just that little bit closer. I didn’t that was possible, but it was.”

It’s coming up on six years since Rancid last visited the UK, and even that was just two shows as guests to Green Day. You're coming back for Slam Dunk, but are there any shows of your own on the slate?
“Well, Rancid’s putting the finishing touches to a new record as we speak. When that’s gonna come out, I’m not so sure. Hopefully I’m gonna come out [to the UK] and do some stuff for this EP, which is where I’m focused right now, so hopefully I’ll be over there. But, you know, I’m a fucking Anglophile. I’m over there as often as I could be. It’s been almost 30 years since I first visited. The UK is in my blood.”

Lars Frederiksen's EP To Victory is out now.

Get ready for the ultimate punk bro-down as Rancid and Dropkick Murphys head out on tour this May.

Rancid and Pennywise will be on the road this September with openers including Suicidal Tendencies, Turnstile, and more.