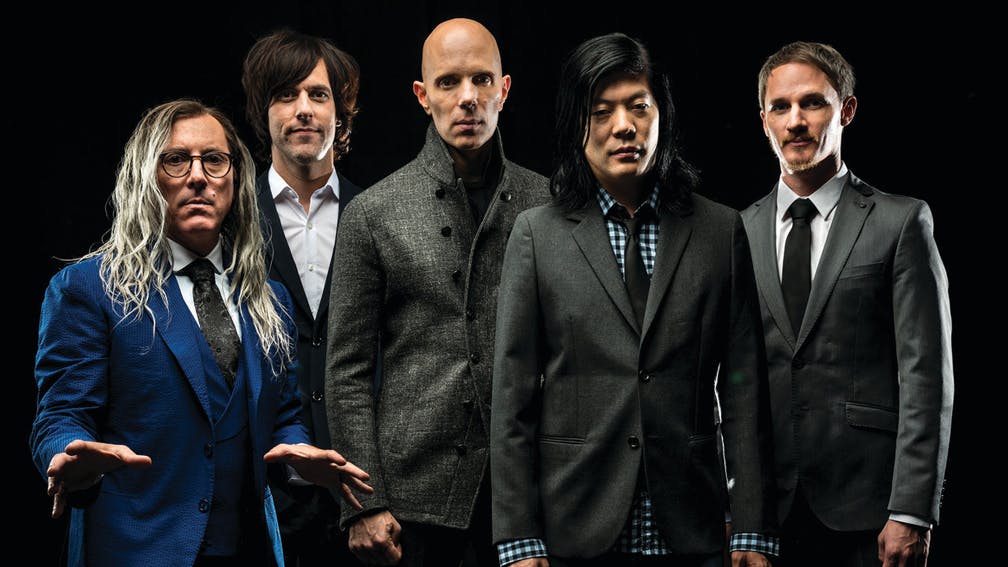 If you want to stump an A Perfect Circle fan, ask them which of the band’s first two albums they prefer: 2000’s Mer De Noms debut, or its 2003 follow-up, Thirteenth Step. Such is the towering majesty and superb artistry of both records, it turns a simple either-or question into an agonising choice. Both are brilliant, and both very much stand on their own merit, with their own personality. The bad news for those that have long struggled with this quandary is that Eat The Elephant, the first studio release since 2004’s politically focused covers collection eMOTIVe, has made the ‘Best APC album’ debate a three-horse race.

Not as romantic as their debut album, or as dynamic as the second, Eat The Elephant instead comes swathed in a captivating coat embroidered by growth and maturation that doesn’t unbutton easily. Just look at the songs released so far. The Doomed, though powered by grand spaghetti western drums that give a clue to its origins as a piece of soundtrack work by guitarist and band mastermind Billy Howerdel, constantly pulls back from its own bombast. So does Disillusioned, thanks to a melody that melts into starkness under the heat of its own intensity. They’re slow burns, though, with only TalkTalk, all airy keys and a classic cryptic Maynard James Keenan lyric (‘Like cake in a crisis’) sounding like it might have been cryogenically frozen for the past 14 years. Which, incidentally, the singer has jokingly been suggesting Billy was.

Speaking to K! recently, Maynard discussed his tenure specialising in the layout of pet shops, specifically his idea of having frequently bought items, such as dog food, stored at the back, to make customers walk past other less viewed products on the way to fetch it. It’s a strategy repeated here. Eight tracks in, Delicious provides the most obvious piece of connective tissue to previous albums, thanks to an aching Cure-esque guitar solo. But you’ve experienced a markedly different APC by the time you get there.

That includes So Long, And Thanks For All The Fish, which has much in common with a song by Maynard’s other band, Tool. He is, after all, the man who listed the reasons he wanted to see Los Angeles flushed into the ocean on the title-track of the prog-metallers’ 1996 album Ænima, and here similar sentiments are juxtaposed with Eat The Elephant’s most bombastic song, suggesting wry resignation to ‘The final curtain call in all its atomic pageantry’ has replaced the boiling rage of yore. It also showcases one of many very different vocal performances from Maynard, no doubt informed by the three Puscifer albums he’s made in the intervening years; with the frequent Bowie-isms in his delivery made all the more explicit by So Long…’s mention of ‘Major Tom’, alongside references to late boxer Muhammad Ali and Princess Leia.

Eat The Elephant fights on several fronts, simultaneously reminding listeners what makes APC so special, while also providing enough progression – and then some, in the case of weird electro-orchestral closer Get The Lead Out – to make their return truly count. It’s also a political album, but one that neither panders, nor condescends, to the listener. What, you may ask, does that title mean? The clues are there on an album that poses many questions, but doesn’t offer up any easy answers. You’ll still be figuring it out in another 14 years.

Eat The Elephant is out now on BMG. A Perfect Circle tour the UK in June, playing the O2 Apollo in Manchester on Tuesday 12 June and the O2 Academy Brixton in London on Wednesday 13 & 14 June.

Maynard James Keenan: "If you're going to put on make-up and wear stupid wigs you have to understand the 'w*nker' comments are coming"

10 of the best rock and metal remix albums

The Tool frontman raises his wines on a diet of King Diamond, AC/DC and KISS…

The Tool / A Perfect Circle / Puscifer frontman hits back at those who think he's “being paid” to claim that he had coronavirus.