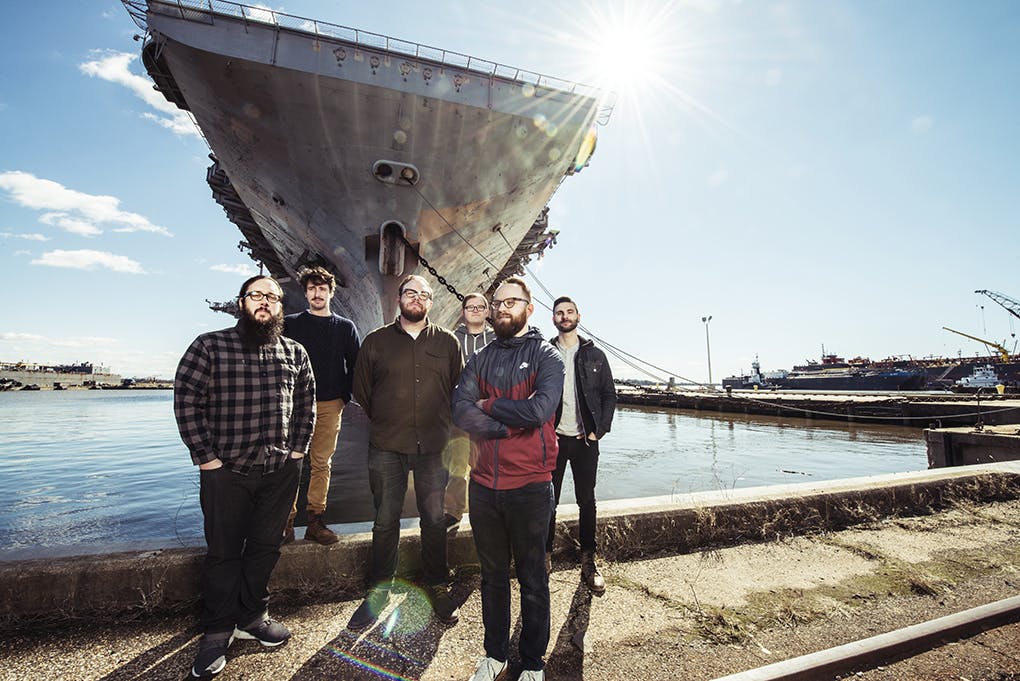 The Wonder Years’ sixth record – out today – starts in Japan. Singer Dan ‘Soupy’ Campbell begins its opening track, Raining In Kyoto, describing small intricacies from a time when his band passed through the titular city. The flooded streets, origami figures, spiritual shrines and his cheap vending machine coffee flash past at a galloping pace offset by soft guitars as another detail emerges: he’s missing a funeral back home. And suddenly, the real purpose of the song begins to unfurl. It’s a place for the frontman to deal with the guilt of being absent from his other life – the one where he has school friends, family and a front porch – in order to stand on stages in these foreign towns. Given this, the song could easily descend into a bleak four minutes. But it doesn’t. And that’s because of those tiny details – the folded paper crane, the stranger who helps Dan ring a bell at the shrine – and the humanity they represent. It’s a contrast that almost lifts the song to a place of intense brightness.

This bittersweet duality runs at the heart of Sister Cities. On the one hand, there are Dan’s delicate observations of life from the new and unfamiliar states and time zones he has visited with his band in the years since the release of 2015’s No Closer To Heaven (he kept a detailed journal over the months he was gone to keep these images fresh). But for each of these spiritual or charming apparitions taken from life on the road, there’s a sense that each mile between him and his hometown is still being counted.

The music shares in the frontman’s emotional split, with varying shades of light and dark being cast throughout a record that could be the band’s most sonically complex. It’s an interesting mix. Pyramids Of Salt is a song that’s cold and creeping, with agitated guitars that eventually give way to a fist-puncher of a chorus. But this is immediately followed by the warmth of It Must Get Lonely, a lushly colourful indie-rock jam that’s as instantly welcoming as the first days of summer. Elsewhere, you can feel the frontman’s vocal cords redden as he belts his way through the emotional turmoil of The Ghosts Of Right Now. But then there’s Flowers Where Your Face Should Be, a love song so dreamily soft-focused that Dan almost slips into falsetto. It all gives the record an intriguing ebb and flow.

What’s important is the way that it all pulls together. This is a collection of songs that feels more sure-footed and patient than anything the band have worked on before. That’s not to say that the urgency and angst for which The Wonder Years are known don’t still surface from time to time – they definitely do, in great, big bubbles. But there’s now an abundance of cooling grooves and melodies to counteract the heat. The Wonder Years have always had a habit of making each record they put out feel more mature and level-headed than its predecessor, and this time could be the greatest stretch yet. If No Closer To Heaven kicked up the suggestion that maybe this group should stop being categorised as a pop-punk band, Sister Cities, even with its bold experimentation, assures you that they shouldn’t. But such things are unimportant, because, whatever we’re calling the music here, it is masterfully made and elegantly arranged. And it fills a record that feels completely at ease with itself.

The Wonder Years' Sister Cities is out now on Hopeless Records. Have a listen below.