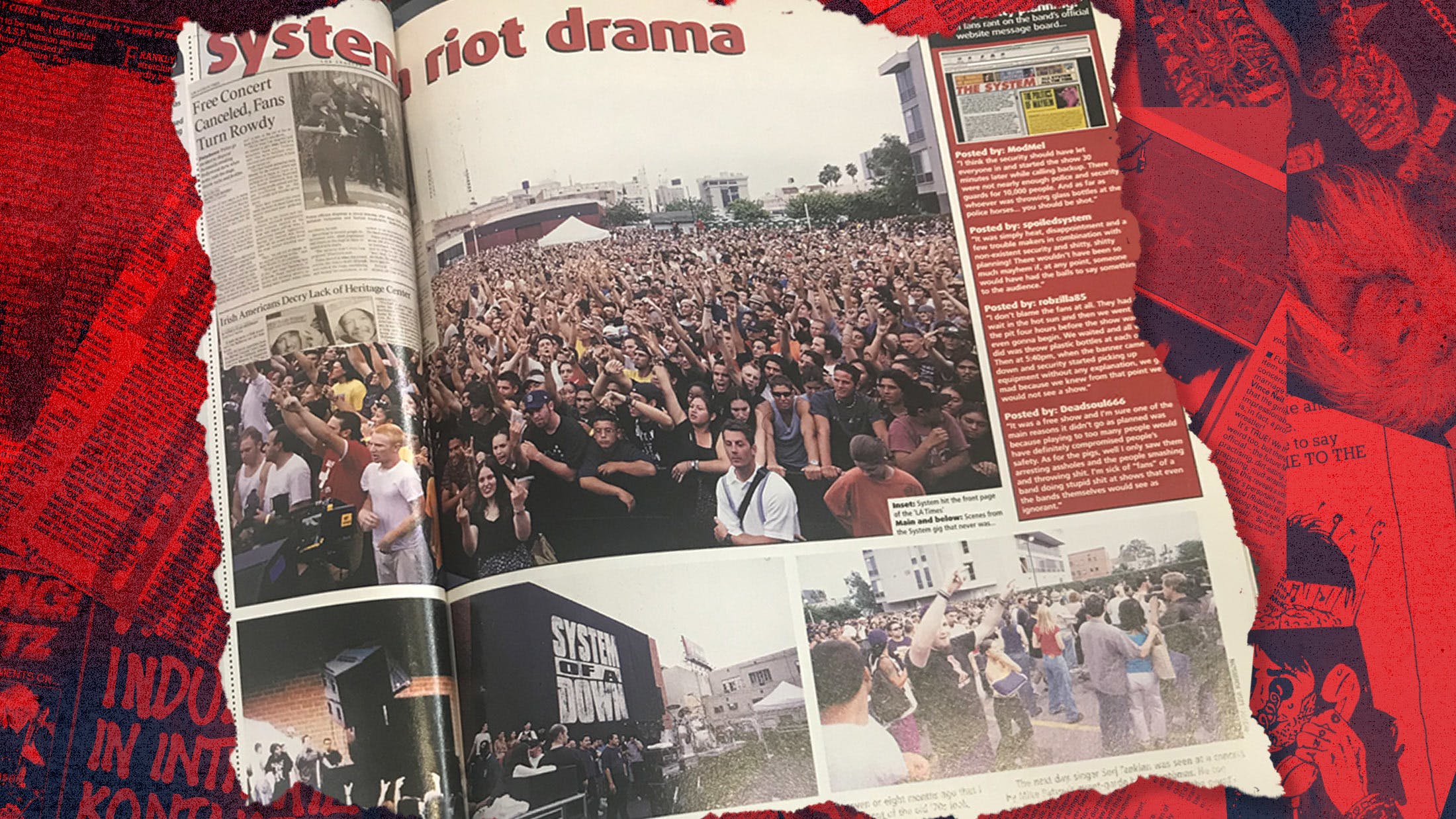 It is late summer 2001. America prickles at the end of the beginning of George W. Bush’s presidency – the bitter mingle of uncertainty and inequality tainting the calm before the storm to come. Nu-metal has crystallised the pent-up energy and disenfranchised aggression of Generation-X into a new kind of volatile youth. The four Armenian-American outsiders in System Of A Down are about to light the touch paper with a sophomore LP that would simultaneously reinvent protest-music in the post-RATM era and catapult them to legitimate superstardom.

Blending esoteric absurdity and documentarian lucidity, Toxicity was an incredible evocation of post-Millennial politics. Released in the week leading into September 11, 2001 (sitting at #1 on the Billboard Top 100 when American 11 and United 175 struck the Twin Towers) its timing was painfully poignant. Lead single Chop Suey! was banned by the United States’ largest radio conglomerate Clear Channel due to its ‘politically sensitive’ lyrics. Most importantly, it’s a love/hate-letter to the city of Los Angeles where the four members of the band grew up amongst the Armenian-American enclaves of Hollywood, Glendale and the San Fernando Valley.

With cover-artwork displaying the band’s moniker in the place of the famous Hollywood sign, its hometown ties were explicit. Recorded in Cello Studios on the corner of Sunset Boulevard and Gordon with uber-producer Rick Rubin, The City Of Angels’ tense, multicultural flavour was ingrained. Even the city’s Manson Family-fuelled trauma bleeds in on ATWA (named after insane patriarch Charles’ own twisted environmental doctrine).

Memories of 1992’s era-defining Rodney King riots still echoed in the public consciousness. Riots had broken-out twice in the previous year in front of the newly-opened Staples Center – when the LA Lakers won the NBA championship in March and during the Democratic Party’s National Convention in August. The sense of a melting-pot threatening to boil over bled into tensions during recording (one burst of violence saw guitarist Daron Malakian bust open drummer John Dolmayan’s head with a microphone stand) and the potent lyrics of tracks like Deer Dance:

Beyond the Staples Center / You can see America / With its tired, poor / Avenging disgrace!'

Release was set for September 4. With the album already guaranteed hit status, plans were put in place by Los Angeles radio station KROQ-FM for the band to perform a free, open-air ‘Thank You Concert’ as part of September 3’s Labor Day celebrations. The parking lot opposite the Vinyl nightclub on Hollywood Boulevard was earmarked as the venue. What seemed at the time like ambitious plans for up to 3,500 fans to attend were put in place.

The fuse was burning on a powder keg about to explode.

A sense of portent built from the evening before, with masses of fans camped-out overnight in the street in anticipation. Well in advance of the 4pm show time, a seven-block area was overrun by aspirant attendees getting drunk and high and buzzing for what felt like a defining moment in time. As was the fashion at the time, kids were spinning bootleg copies of Toxicity they’d burned to CD on bulky boomboxes. 3,500 were granted admittance to the parking-lot. Between 4000 and 7000 more congregated in the area immediately outside. The minimal security laid on were quickly overwhelmed. Safety barricades were scaled. Punters straight-up battering through the gates led to an almighty crush.

An hour in advance of stage-time, Dolmayan described the scene to Kerrang! as “Pandemonium!” What had been intended as a celebration was turning into a catastrophe. “I’m trying to make sure that my friends and my family are OK,” the sticksman stressed. “I’m more worried about that than being excited to play right now.”

Around 4:30, Los Angeles Fire Department spokesman Brian Humphrey has since confirmed, a joint decision was made by police, fire department and event organisers that the crowd had grown too large and unruly and the show would have to be pulled. Police officers and stewards began to make their way through from the back of the audience to advise that the show event not be going ahead and that people needed to leave. Those attempts to ‘peacefully disperse’ the crowd, predictably, did not go to plan.

According to the band’s then-publicist Heidi Robinson and manager Dave ‘Beno’ Benveniste, pleas from System to be allowed to play a conciliator 20-minute set – or at least to be allowed to go onstage to explain the cancellation themselves – fell on deaf ears.

It took the sight of their backdrop being lowered from the red-brick wall – like the banner of some defeated force – to really unleash chaos, however. The stage was stormed. Fans were filmed fist-fighting with security and being flung back over the barrier. Speaker stacks were toppled to the ground. All of System’s touring gear – including Dolmayan’s brand new, custom-made Tama drum kit and numerous other items acquired in advance of the legendary Pledge Of Allegiance Tour with Slipknot – was destroyed in the melee.

Around 150 police officers were summoned to the scene – some mounted on horseback and many S.W.A.T. trained in full riot gear. Shockingly, a crowd of thousands expecting to enjoy some anti-authoritarian anthems did not respond positively. Store and car windows were smashed indiscriminately. Like some nightmare version of the Jackass TV show, dozens of porta-potties were upturned. Property damages at the venue and across the surrounding area were estimated at around $30,000. Six arrests were made.

“From the band’s perspective, this is something that did not have to happen,” Heidi complained, afterwards as the band’s scheduled in-store at West Hollywood’s Tower Records was pulled due to safety concerns, with both authorities and fans venting their anger. “It could have been peaceful!”

In the grand scheme, of course, violence echoes further into history than peace, and the night would be happily consigned to Toxicity’s sprawling mythos.

Were there lessons to be learned? Perhaps. But System Of A Down were not a band to be cowed into playing-safe. And, when the Twin Towers – along with America’s very sense of security – were sent crumbling eight days later, there would be no measured silence. Vocalist Serj Tankian instead published his incendiary essay Understanding Oil, pre-empting an impending evolution of the military-industrial machine and the next decade of military folly.

The band were dropped from dozens more radio playlists, of course, their names inked indelibly onto some mainstream blacklists. At the heart of everything, it was that fearlessness that sent fans flocking to literally stick it to The Man. It was that unforgettable vitality that made them the band worth fighting for…