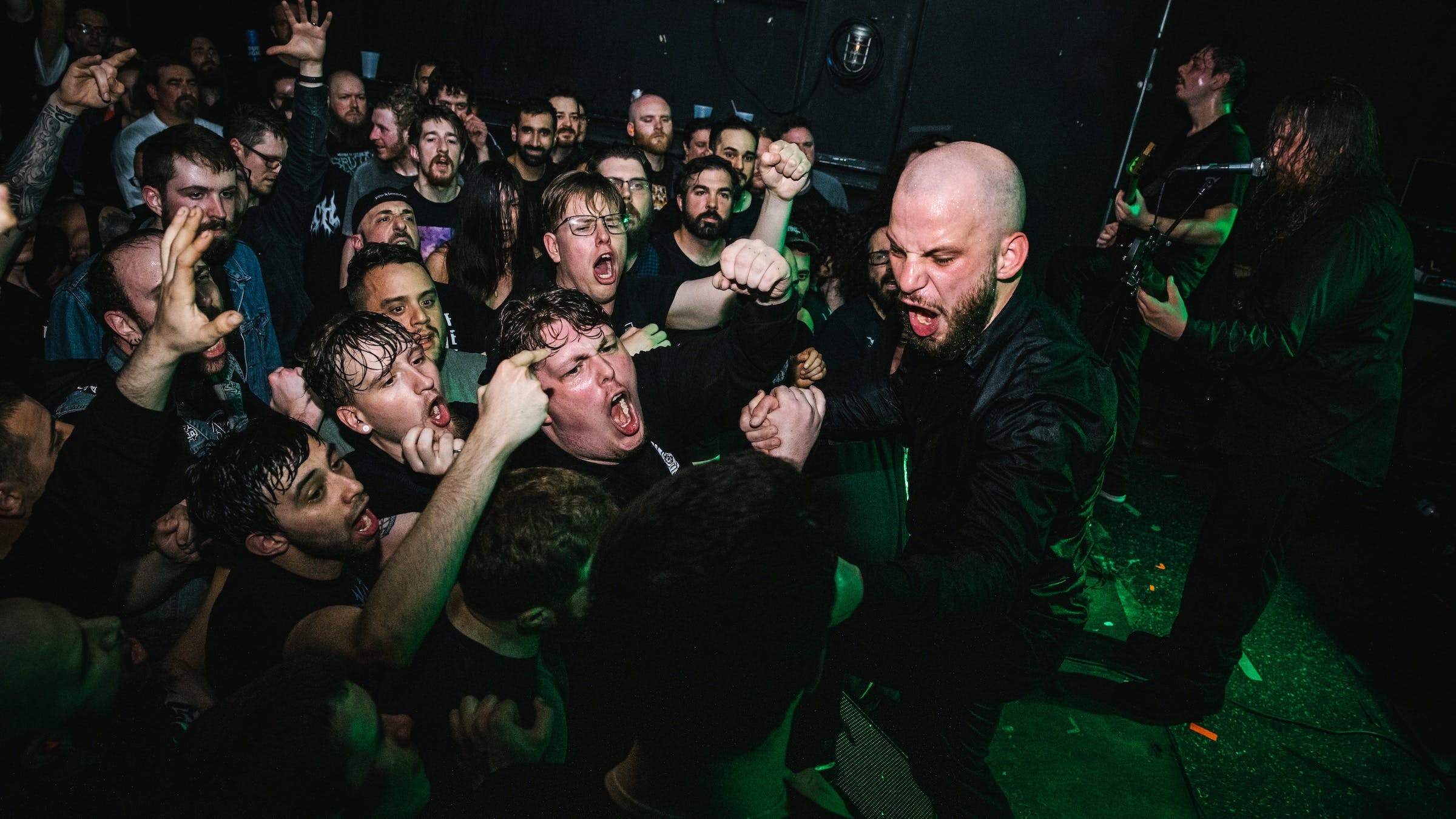 Brooklyn’s infamous Saint Vitus is sweltering and thick with good vibes this Saturday night. Due to the evening's sold-out show, the venue is packed with sweaty bodies casually dressed and sporting excited grins. But more importantly, tonight is a rare moment where the hub of New York’s underground metal scene isn’t a fashion show of enamel pins and industry types. Everyone’s just here for the line-up: experimental death metal savants Rivers Of Nihil, playing their new album in full on the last night of their North American tour with tech-death weirdos Entheos, British sludge upstarts Conjurer, and vicious hardcore crew Wolf King. There’s no pageantry here -- it’s just an incredible night of metal.

California’s Wolf King kick off the evening with a blast of neck-loosening powerviolence. The band are brash and bombastic from the get-go; vocalist Tim Wilson literally ends the second track by screaming, “WOLF KING!” It’s a shame that the crowd, still filtering in when Wolf King go on, doesn’t take Tim up on his repeated requests to come forward and get moving, but the band doesn’t let that reticence affect their performance. Their set is short, but effective, and adequately rips the Band-Aid off the show.

Watching Conjurer’s set is like witnessing someone having an emotional breakdown. The band’s pounding, no-nonsense sludge-doom is furious as hell, and its makers’ faces are so twisted and pained that it’s hard to tell if they glisten with sweat or tears. During once song, guitarist/vocalist Dan Nightingale comes to the front of the stage and begins bellowing a capella, his un-amplified throaty roar audible even over earplugs. The sets ends with bassist Conor Marshall leaping into the crowd and playing the final song from the pit while fans headbang around him like worshipping cultists, and Dan smashing his guitar to thunderous applause.

Entheos are the odd band out of the line-up sound-wise; their frenetic brand of electronically-tinged technical death metal sounds like an animated chat between two of the aliens in District 9. But the California quartet power energetically through a grinding live performance of their new album, Dark Future, in full. Their mixture of flickering neon lights, blistering guitar scales, and between-song positivity via vocalist Chaney Crabb provides a respite from the sheer viciousness of the previous two sets.

By the time Rivers Of Nihil arrive onstage, Vitus’ main room is packed to the gills and ready to explode. Though the band look a little more mature than the acts before them -- dressed in collared shirts and accompanied by a live saxophonist, natch -- they immediately launch into one of the more energetic, exciting, and brutal sets the venue has ever seen. The crowd beneath vocalist Jake Dieffenbach reach up to him in reverence and sing along to every word to every song on the band’s new album, Where Owls Know My Name. In turn, Jake commands a Wall Of Death and parade of stage-divers from the opening bands, both of which are ambitious and completely destructive in the cramped sweat lodge.

By the end of the night, everyone looks like they've got to the gym for the last seven hours (and in a way, they have). The audience is abuzz with nonstop praise. No one can quite believe what they've seen -- a sold-out show, a perfect line-up, a night worth every penny and drop of sweat shed for it.