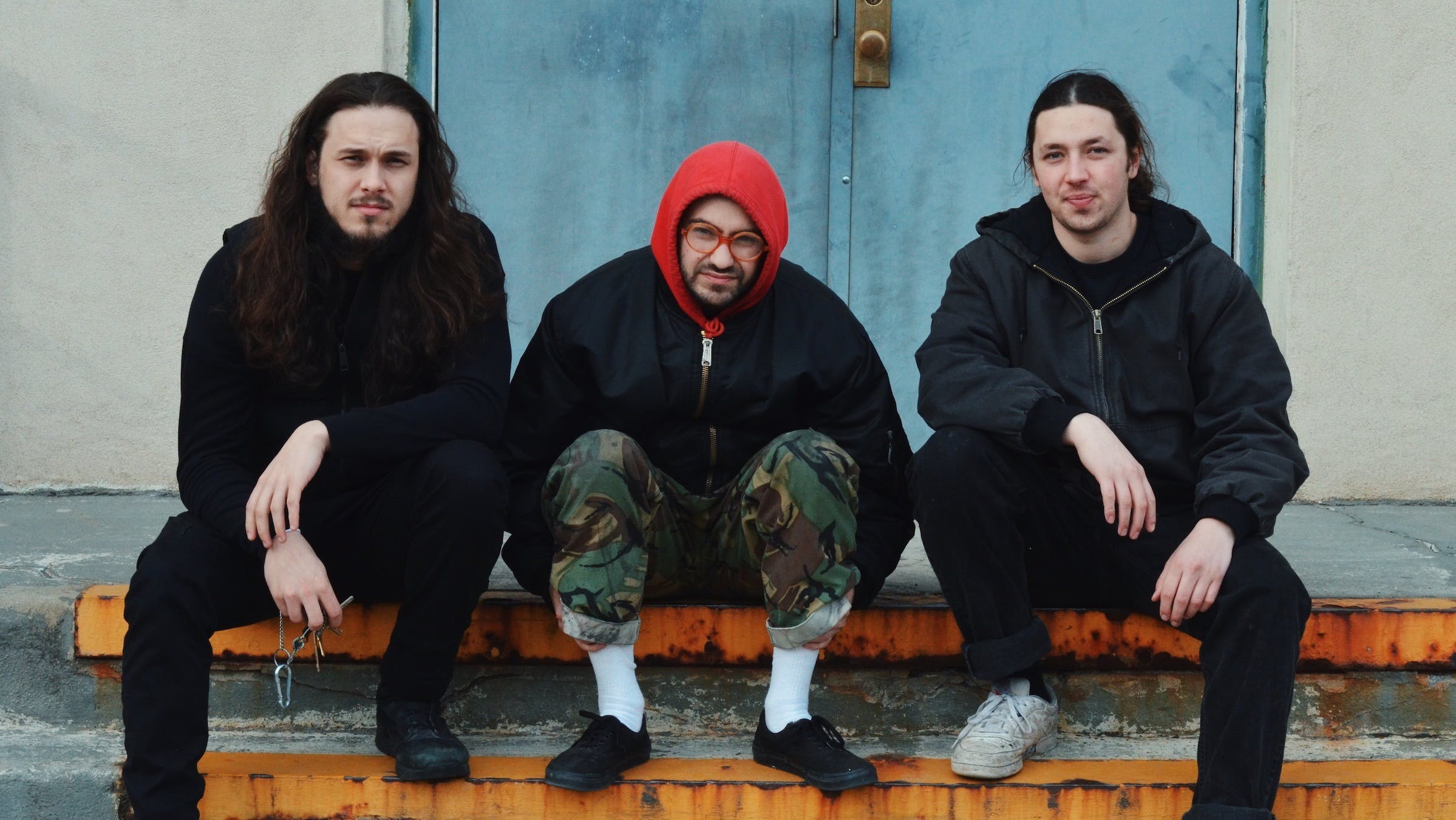 Dog whistles have long since been used by certain political groups as a secret code to their followers. Much like a high-pitched whistle that can only be heard by sensitive canine ears, these messages turn the heads of the intended group and go relatively unnoticed by the rest of the population. New York City hardcore trio Show Me The Body, consisting of vocalist/banjo player Julian Cashwan Pratt, bassist Harlan Steed, and drummer Noah Cohen-Corbett, have co-opted this idea for themselves, inspiring the name of their new album, Dog Whistle: Their logo, a simple depiction of three coffins, designed by Arvid Logan, serves as a dog whistle for the band, their friends, and their fans to signal their belief system to one another.

This means putting the logo on their records, their merch, and even posting guides for how to quickly tag it on a wall using a paint roller. (The incentive? Send them a picture of your coffin tag and you get free entry to a show of your choice.)

“If you see the coffins, to us, it means that the person wearing them has a certain belief system,” says Julian. “It means, ‘That person is safe.’ It’s Show Me The Body’s logo, but it’s everybody’s logo who wants it.” The aforementioned beliefs, shared by not only the band but also their collaborative group of NYC creatives called Corpus, are simple: Get by on your own sweat. Be inclusive to every person. Open up your space to those in need. Everyone gets paid for their labor. Rep where you’re from, and never give up on your home. If you wear the coffins, it’s a silent agreement that you’ll uphold those tenets.

Show Me The Body began nearly 10 years ago, when Julian and Harlan met at Elisabeth Irwin High School in Manhattan and started playing music together at Harlan’s house in Long Island City, Queens. (They cite Harlan’s dad as their brutally honest, first creative director.) They named the band after a very crude translation of the Latin phrase “habeas corpus” -- the right to not be detained unless there is evidence that you have done a crime -- which is, quite literally, “show me the body.” They later met drummer Noah in Massachusetts when Julian did a brief stint at Hampshire College, and preferred hanging out with the locals rather than the people at school.

The group developed an aggressive, noisy, discordant brand of hardcore that mixes noise, sludge, and even elements of hip-hop, which the band feel is the sound of New York City.

“I think a big part of what makes Show Me The Body is being in New York and being exposed to different types of nightlife,” Julian says. “ When you’re in New York, there’s a lot of hip-hop nightlife, and there’s a lot of gay nightlife. And if you think that’s uncool, you’re fucking uncool. Straight up. If you don’t see the beauty in park jams, the ciphers, the drag shows, and the fucking crazy trans raves that go down in the city, you don’t get it. All of that stuff influenced us or was important to us. I think other hardcore scenes don’t get that kind of exposure to nightlife like we got.”

The new record is the most personal thing they’ve done to date, which they attribute to looking inward after traveling the world in support of their 2016 debut album, Body War. The song Drought came from seeing the many deserts of the world and witnessing firsthand the hardship a lack of water can create. The song Camp Orchestra was born of a trip to Auschwitz while they were in Poland, learning about groups of Jewish prisoners who were forced to form orchestras to soundtrack everything from executions to Nazi celebrations to war marches.

“It was a personal and horrific experience for us, especially with our families’ relationships to that part of history,” says Harlan. “They were essentially soundtracking the Holocaust. It was a profound experience to learn about that, as musicians and Jews, and that feeling was so intense. We were really inspired in that moment. So that’s the first song on the record for that reason.”

Considering Show Me The Body are a hardcore punk band with their beliefs living under America’s current president, it might be easy to write them off as a political band. But they are quick to dismiss that.

He continues, “[Dog Whistle] is also about realizing that kids are struggling all over the world in similar ways. And that Corpus and Show Me The Body can be about kids who are all feeling this, not just kids who are feeling this in New York, and we can feel solidarity to kids in other places who are endemic to their place, who feel pushed out.”

The plan is, if they can spread the message of Show Me The Body’s belief system throughout the world, it’ll beget more inclusivity and generosity throughout the disenfranchised kids everywhere. That said, they’re careful to say they’re not trying to “help” people -- that job is best left to community organizers and therapists who are trained and put in the labor to do so -- they’re just trying to do what they can to free themselves, and anyone who is there who wants to have that same experience is welcome to come along for the ride.

“Lowkey?” Julian says with a grin. “Show Me The Body is for the freaks.”

Album review: Show Me The Body – Trouble The Water

Show Me The Body announce new album, Trouble The Water

Show Me The Body have shared a killer new single and video, Loose Talk, with more to come later in the year…

Show Me The Body, Jesus Piece, Year Of The Knife, and Machine Girl will join Code Orange on this huge tour.

Art rock powerhouse Daughters will hit the road this winter with HEALTH and Show Me The Body along for the ride.

Show Me The Body, Jesus Piece, and Blu Anxxiety turn Music Hall of Williamsburg into an inclusive, cathartic war zone.