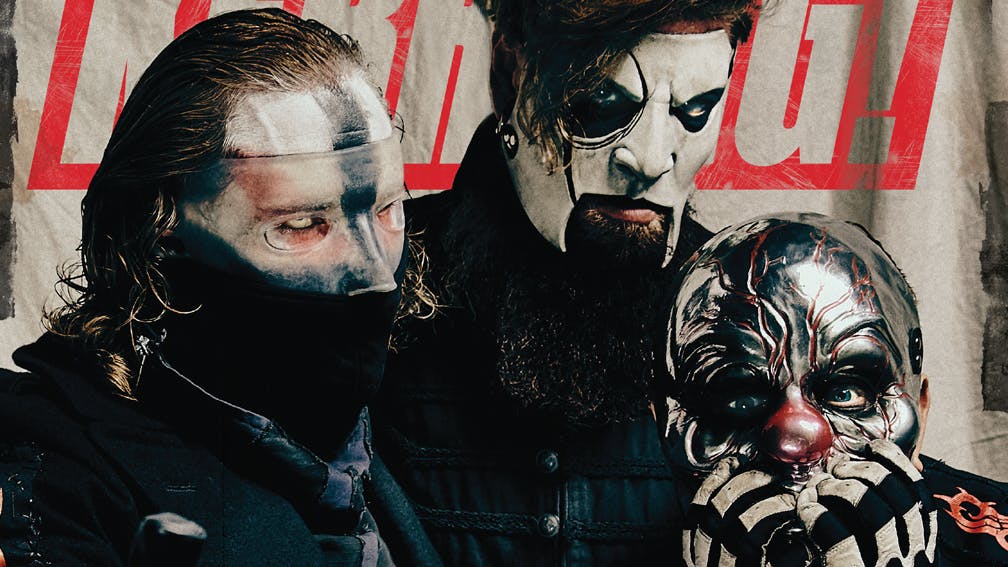 The wait is, at long last, over. This week, We Are Not Your Kind is finally unleashed upon the world. To fully understand it, though, requires you to descend deeper than ever into the darkest corners of Slipknot’s collective minds. Allow Corey Taylor, Jim Root and Shawn ‘Clown’ Crahan to be your guides…

Plus, to celebrate the release of WANYK, and Slipknot's return to the K! cover, we’ve teamed up with artist Jofre Conjota to bring you a bespoke, exclusive art print. See more of Jofre’s work at Behance.net/Jofreconjota.

Elsewhere in the mag, Killswitch Engage's Jesse Leach tells the story of how he found a way back from the brink; Lydia Night of The Regrettes shows the positive power of being a little weird; Feeder's Grant Nicholas takes the career-spanning Kerrang! Interview; Sum 41 frontman Deryck Whibley tells us about the songs that changed his life; and I Prevail take us inside their biggest UK tour to date.

In the reviews section, Kentucky hardcore mob Knocked Loose go off like a bomb on their incendiary second record, while Aussie garage-rockers Press Club dial up the punk on album two. On the live front, Iron Maiden conquer as the bring The Legacy Of The Beast Tour stateside, Amyl And The Sniffers rage in New York's hottest venue, and the wild man of alt.rock, Perry Farrell, declines to play it safe in Soho, London.

There are also six Bring Me The Horizon posters – from their 2006 Count Your Blessings era, up until this year's amo.

All this and more is available in the new issue of Kerrang!, which you can get anywhere in the world through Kerrang.Newsstand.co.uk. But for UK residents, it hits the shops on Wednesday, August 7 from all good newsagents.