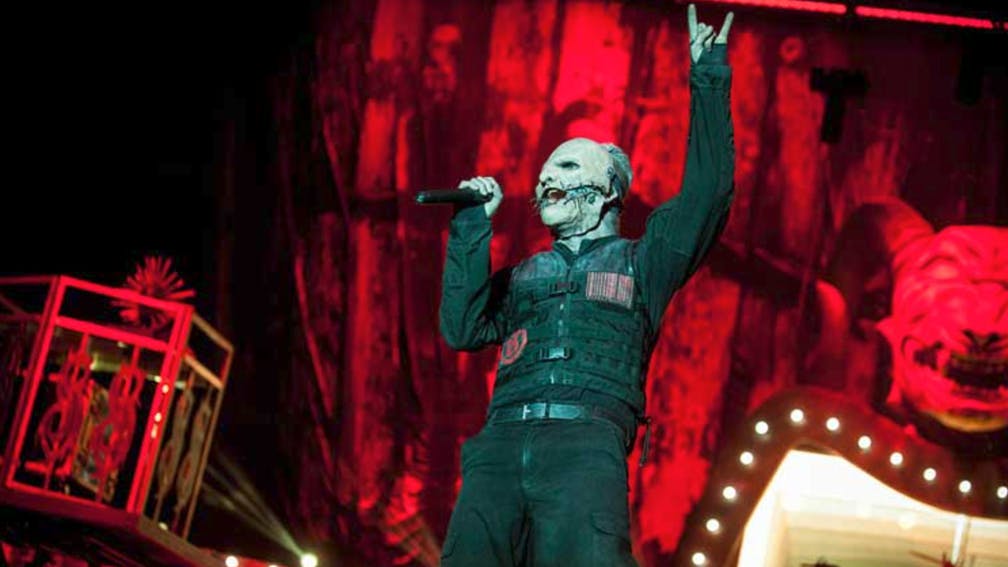 Slipknot have been confirmed to headline Download for the fourth time next year. Here's what Kerrang! said following their three legendary performances.

The band made their Download headline debut in 2009, sharing the top slots with a reunited Faith No More and Def Leppard. Marilyn Manson had just delivered a disappointing, often confusing set and it was up to the Iowan metallers to close the night on a high note…

It’s an easy task to up that ante, but Slipknot take it, raise it then slap the bejesus out of it. Whatever you think of their masked shenanigans, they’ve probably never played a gig but less intense than a trainwreck and tonight is no exception. As Spit It Out sees tens of thousands of maggots sitting down and leaping up en masse, it's a rather special end to the evening.

“Everybody take one step back! The barrier's collapsed!" This is the chaos unfolding in front of Corey Taylor's eyes. Things have reached such fever pitch during a furious Left Behind that the architects of madness have put a stop to it to regain order.

There are bruises, scratches and dislocated shoulders in the pits. Make no mistake, the return of Slipknot to the Download Main Stage is fucking pandemonium.

And then it stops. The out of control band get things under control. Safety is sorted. Everyone's given a moment to get the beast back on its leash. And then they open fire again, and chaos is restored.

This is the second time Slipknot have to call a halt to the mayhem. But they started it. They've wound 90,000 people up to breaking point and let them loose on one another. Up on stage, wearing white boiler suits that give the impression of fallen angels, there is violence. There is danger. The eight men criss-cross the stage like masked atoms smashing around the Large Hadron Collider at CERN, and the power coming off them could light hell for a thousand years. Eyeless is insane. The really-aired Get This is the most extreme noise ever made on the stage. All of it is music to get a black eye to. And at the centre of the madness is Shawn 'Clown' Crahan.

At 3pm, Clown’s not here. We get Shawn. "I don't know when Clown’s gonna show up…" says the surprisingly friendly, kind and paternal 43-year-old, without a hint that he's joking. "You don't know when it's coming, or when the transition is happening, but everyone suddenly goes, 'Oh, Clown's here.'"

Clown, he says when asked about playing on the same level as Iron Maiden, "doesn't give a fuck where we are, who else is playing, about anything other than being onstage and wreaking fucking havoc".

What Shawn cares about is doing a good job. His brain is concentrating on "safety; is everything else set the way we want it, all that shit". He doesn't want to look at the stage because "I know more about that fucking stage than anyone needs to know. I know how it's built, I know how big it is, I know where there's security... Shawn thinks about that so Clown can just fucking annihilate on it. Clown doesn't fucking care about that shit. Fuck off. Clown just wants to go and play music. Clown doesn't fucking care how make the stage is – hand him his fucking baseball bat."

Later on, bat in hand, you see exactly what he means. Shawn is calm – if slightly intimidating – in conversation. But when Slipknot rip into the howl of thrashing guitars and hate that opens People = Shit, Clown comes out. He batters his gear. He throws himself around like a man who's stopped caring about broken bones. He's a maniac. And it's because of him that Slipknot have to get the crowd back under control.

Even with having to put the brakes on, Slipknot don't rein in the aggression when they turn it on. Particularly not during Spit It Out when, as is tradition, Corey Taylor orders everyone in the audience – 90,000-odd maggots – to crouch down. When things kick back in, everyone erupts, jumping up. The shock when they land is probably enough to knock the planet's orbit out of whack.

"Dude, I fuckin' shit myself when I saw that!" laughs Corey the next morning. "We do that at every show, but I got goosebumps. I turned around to Joey [Jordison, drums] freaking out. Even with his mask on, I could tell!”

The last time Slipknot were here was 2009, with a set so mean they captured it on DVD – 2010's (sic)nesses. They may have been playing a lot of the same songs, but there was a sense of overpowering confidence about this year's slaughter.

"Last time was a dream come true,” he says. "But we were so anxious. Last night I could just enjoy myself."

Both men feel the absence of their bassist and friend, Paul Gray. Shawn says it's "still weird, but we're getting there”, while Corey says that to be doing this headline set was "to honour him".

"The only way last night could have been better if Paul was with us,” he explains. “We can't have that. But he was there in spirit. And now, where it's still aggressive, we've got a positive [ feeling], almost love, in the show as well. It's become a beautiful release for us all."

Onstage, it was not beautiful. It was not loving. But there were smiles all round. And there was that release. Who knows what the future will bring? But with Slipknot on the sort of form they used to destroy Download, we should all be very excited.

Slipknot's most recent Download headline set was in 2015, closing the Main Stage on the Friday. Muse and KISS closed the Saturday and Sunday night respectively. The band delivered a performance which will live long in the memory.

“Slipknot. Is. Home.” Tonight’s muddy paddock might be a long way from the Iowan cornfields, but it’s hard to argue with Corey Taylor. Detonating a Download headline for the third time in six years, the 18-legged metal monster is where it belongs. A lot has changed in those years. Paul Gray’s tragic passing. Joey Jordison’s ignominious departure. Are Slipknot 2015 the band they were?

No. But they’re still modern metal’s apex predators. Chaos might’ve subsided into slick professionalism, but it’s still spine-tingling to behold. Fresh cuts AOV and Killpop seethe with enough pit-kicking aggro to blood the front-row bruisers (“I’m going to rename this Down-pour 2015!” grins Corey Taylor as drizzle turns to deluge and everyone gets VERY muddy), but also enough melody to warm sodden raincoats at the back. And old cuts run deep. A schizoid Eyeless. An ear-gouging Wait And Bleed. And Surfacing – still brain-scrambling 16 years down the line. “I don’t need to tell you what time it is!” growls Corey as everyone "sits the fuck down". He could easily be speaking in broader terms. This is Slipknot’s time. And they’re not wasting a moment.