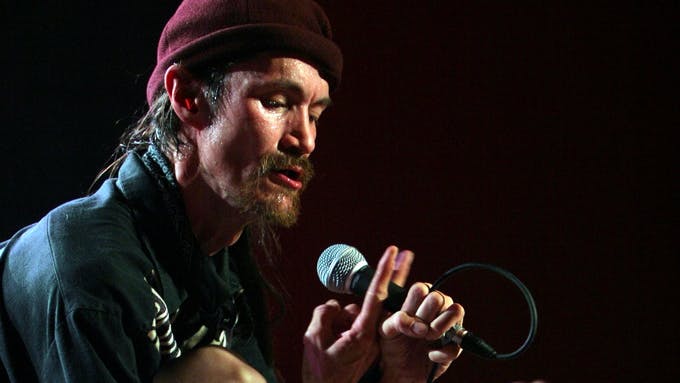 Onstage he was a ball of relentless energy. Offstage too, masking his insecurities and complex personality with self-deprecating humour and random acts of self-destruction. Most of all, though, Mr Chi Pig – the frontman with legendary Canadian punks SNFU – was a total one-off…

His death at the age of 57 was confirmed on Thursday, July 16 by his bandmate, SNFU bass player Dave Bacon, who, writing on his Facebook page stated: “On behalf of Ken’s family, to his punk rock family: It breaks my heart to say this, but our beloved friend has left this mortal coil just a short while ago. He is now at peace. May he live on in our hearts and memories forever.”

Born to a German mother and Chinese father, Kendall Chinn was the second of 12 children and endured a turbulent childhood. Watching the Sex Pistols on TV, his life was changed by the impact of punk rock and he renamed himself Mr Chi Pig as he formed his first band, Live Sex Shows.

In 1981 that band morphed into SNFU – Society’s No Fucking Use – and swiftly became key players in the burgeoning skate-punk scene in Vancouver and far beyond.

Chi’s charismatic presence and his eccentric performance style (which at times included masks and puppets) defined the band’s image as they released a string of three classic albums – …And No One Else Wanted To Play (1985), If You Swear You’ll Catch No Fish (1986) and Better Than A Stick In The Eye (1988). The band’s live schedule intensified as they toured relentlessly, playing shows throughout the U.S. and Europe.

In the winter of ’88, they hit the UK and played a legendary show at London Sir George Robey pub in Finsbury Park with British power-punks Snuff. A film of that show (below) captures the dreadlocked singer in typically gregarious form.

Splitting in 1989 due to inter-band conflict, SNFU reformed two years later and soon signed to Epitaph Records (then home to the likes of Pennywise, NOFX, Rancid and The Offspring). Three further albums followed – the most enduring of which is 1995’s The One Voted Most Likely To Succeed. Now viewed as elder statesmen by the so-called third wave of U.S. punk bands, SNFU began to sell records as they toured with the likes of Green Day and Bad Religion.

Despite the fact that they’d begun to sell records, SNFU splintered once again and a stop-start career followed as a result. Chi himself battled addiction and his own deteriorating mental health, finding himself homeless at one point.

In March 2010 his life was celebrated in the documentary, Open Your Mouth And Say… Mr Chi Pig. The movie was the result of a chance encounter between filmmaker Craig Laviolette, who walked into a bar and found Chi working there.

Eulogising the impact of both SNFU and Chi, the film turns into a more harrowing watch as the singer is interviewed in-depth about his music, his sexuality, his addiction, and his visibly precarious state of mind.

In later life, Chi battled increasing ill-health but he continued to perform, at times using the name DNFU – Distortion’s No Fucking Use – as well as touring with SNFU. Reports in late 2019 suggested that he was seriously ill and had very little time to live – a fact which was confirmed in a candid interview which he conducted with Beat Route magazine in November.

Chi’s passing has been met by an outpouring of grief by the punk rock community around the world, with Billie Joe Armstrong leading the tributes.

Writing on Instagram where he posted a picture of Chi in full flight, the Green Day frontman said: “Oh man. This breaks my heart. Chi Pig was one of the greatest front people I’ve ever seen. I saw SNFU at Gilman when I was 16. I thought he was going to jump through the ceiling. Super smart. Great lyrics. Amazing album titles. So funny. He had an amazing mask collection. Lead singer for SNFU. What a bummer. Sending love to all the Edmonton and Vancouver punks. What a loss.”

Kerrang! would like to echo those sentiments and we send our condolences to the Chenn and SNFU families. Rest in peace, Mr Chi Pig.