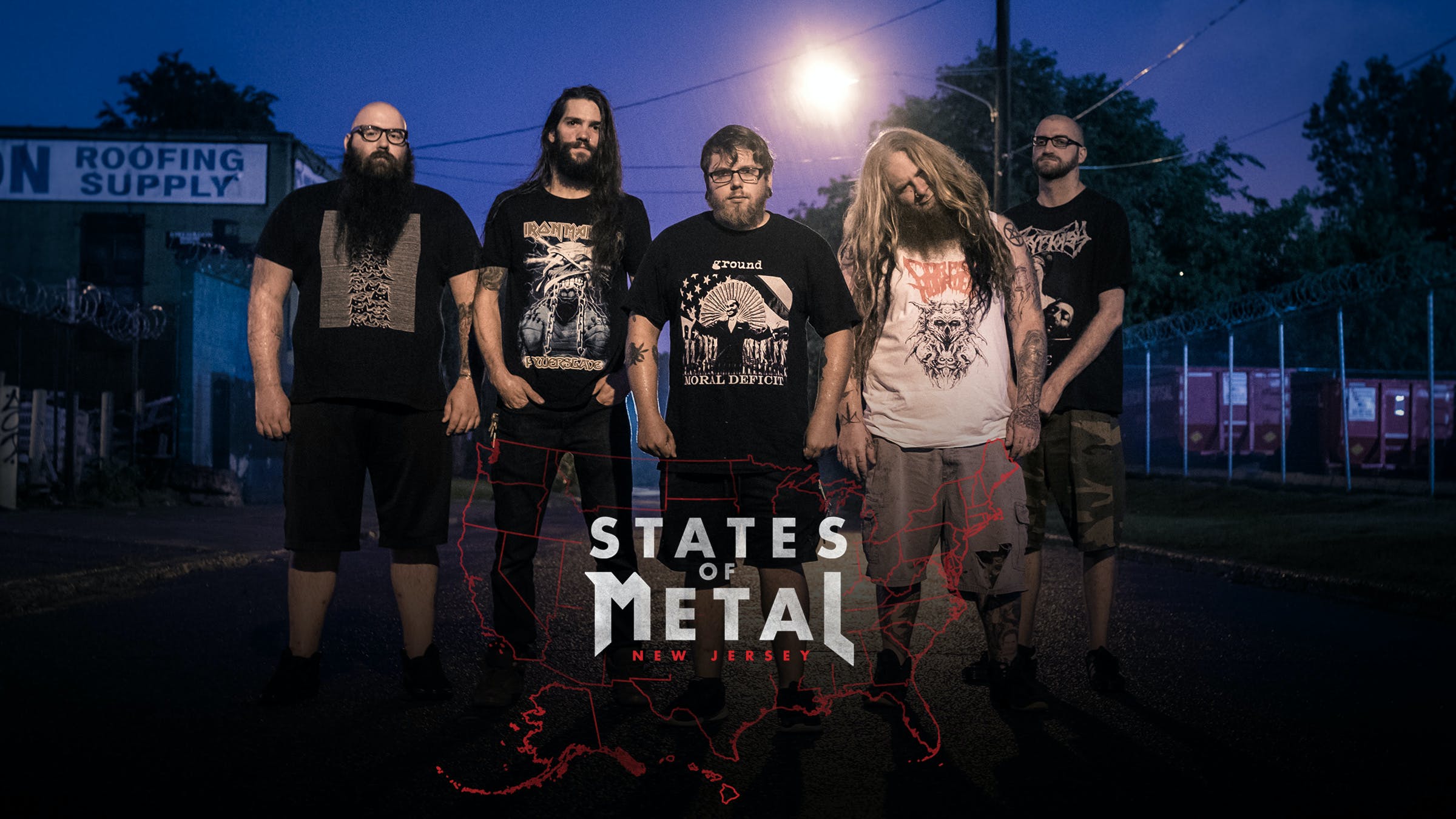 Few American states have as poor of a reputation as New Jersey does. Located between the major cities of Philadelphia and New York City, the Garden State is considered by many to be nothing but mob mansions, chemical run-off, and boorish Italian stereotypes. For most, it’s an American punchline: New York may have rats and roaches, and Philly might have Dennis and Dee, but New Jersey has New Jerseyans.

Yet, despite its bad rap (or maybe because of it?), New Jersey has always been a hotbed of hard rock and heavy metal. More affordable than New York, and less historically precious than Philadelphia, the Union’s third state has spawned blue-collar musicians who grew up staring at skylines rather than walking beneath them, and forgo rock star dreams in favor of working their asses off.

“My father was a piano player and a piano teacher, and my mother was a singer,” says Doc Coyle, guitarist for Bad Wolves and former guitarist of metalcore heavyweights God Forbid. Hailing from New Brunswick, God Forbid’s melodeath riffs, hardcore breakdowns, and racially diverse line-up helped them solidify the early 2000s New Wave Of American Heavy Metal as one of the genre’s most important growth spurts. “I saw my father teaching all day and then playing weddings on the weekend. And when he wasn’t out teaching, he was practicing. He was educating himself.”

Where, exactly, New Jersey’s metallic legacy began is up for debate – but the NJ band whose influence is most felt on metal is undeniably the Misfits from Lodi. Formed in 1977 and disbanded by 1983, The Misfits’ brand of anthemic hardcore about horror movies and outsider culture helped set them apart from the punk scene at large, which was more concerned with art and politics. In that way, the Misfits were firmly blue-collar – rather than pining about self-important abstracts, they were belting huge 'WHOA's about popcorn flicks.

As metal progressed, so did Jersey, but the state’s soul-deep elbow grease remained. With their big hooks and lyrics about trying to survive everyday life, Sayreville’s Bon Jovi was all about giving the public the pop it wanted. Meanwhile, Jersey’s thrash and death metal bands were unusual, hard-working, and gritty as fuck. Most notable were the gutter thrashers in Overkill, but Passaic’s Whiplash and Red Bank’s Ripping Corpse added off-kilter brutality to the genre’s speedy origins.

This hands-on approach to musical progression carried over into the Nineties and 2000s, as Jersey bands like For The Love Of and Deadguy brought unrelenting power and strange new influences into metal and hardcore. For many, this musical diversity was born out of necessity. Since affordable rehearsal space wasn’t easy to lock down, there was no spot just for metalheads; as such, bands picked up little bits of everything along the way.

“We rehearsed in this studio called Big Noise, and you got a chance to hang out and chat with local bands,” reminisces Doc Coyle. “You had all these different genres of music, and you could vibe on that. You’d have hardcore bands, ska bands… and back then, you could just go in a band’s room and watch them rehearse. You get a feel of how good you are. We were very self aware of ourselves as a band, and we knew the bands we respected – Dillinger Escape Plan, Candiria – they rehearsed a lot. But you were paying for rehearsal space, so you couldn’t just practice all day. You had to use the time you had.”

But even with its thriving body of musicians and metalheads, New Jersey’s designation as a “garbage state” still hangs over it. Coyle relates this to two main factors: “First, when you drive from New York to Newark Airport, you pass all those refineries. And if that’s all you know about Jersey, you think it’s an industrial wasteland – even though it’s the Garden State, with more greenery and farmland than anything else. And then, I think there was a huge shift in perception after The Sopranos and Jersey Shore. These are stereotypes, but they have an effect. And what’s sad is, there’s not one New Jersey. There’s 25 New Jerseys.”

Something headbangers unfamiliar with the state might not consider is how New Jersey’s scene reflects its shape and density. New Jersey is ranked 47th in the nation by size, but 11th by population, and its hourglass-ish shape divides it into two distinct sections: North and South Jersey. North is closer to New York; South to Philly. Each region has its own culture, venues, and promoters – and its own set of issues when it comes to maintaining a scene.

“In [South Jersey], people aren’t scared to travel for shows,” says Rob Wharton, local promoter and guitarist for Jobbstown brutal death metallers Cognitive. “Kids will drive over the bridge, Philly kids will take a train. And while Philly’s the center of South Jersey, sometimes you’ll get bands playing madcap little South Jersey venues. I had Ion Dissonance play a room for, like 150 people.”

But while some Philly fans may be more willing to travel, getting New York fans to head out of the city is still very much a struggle. “It’s very hard to book shows [in North Jersey],” says Anthony Gutter, head of record label and promotion company Gutter Christ productions. “Unless you have a super-sick headliner, you’re not gonna pull. New Yorkers don’t own cars, or they don’t want to drive into Jersey, so [a venue] has to be on a train stop. And New York and Philadelphia heads are spoiled, because they have a show every night – sometimes two or three. So they don’t need to come here.”

“We get a lot of bands who play here on their way up,” says Fred Barnes, owner of Clifton venue Dingbatz, a mainstay for North Jersey metalheads. “We had a show that was Kyng, Pop Evil, and Egypt Central, and we were lucky if we had 50 people. Three months later, they’re headlining Starland Ballroom in Sayreville.”

“New Jersey has one of the most solid music scenes on the map,” adds Maria Shields, Marketing director of Sayreville’s Starland Ballroom. “We don’t just think so; bands tell the fans each and every time they play here. A lot of talent is brewed in the Garden State, and our fans are some of the most dedicated, passionate people on earth.”

That very passion is what drove many New Jersey fans to help their favorite bands become the legends we know. Just ask Maria Ferrero (A.K.A. "Metal Maria"): Alongside Megaforce Records founders Jon and Marsha Zazula, Ferrero helped release Metallica’s first two records, and then went on to manage them, Anthrax, and Ministry, while discovering young acts like Testament and Vio-Lence. Today, as head of Adrenaline PR, she does promotional work for bands like Lamb of God and Suicidal Tendencies. But it all started with a crew of rowdy headbangers sleeping on the floor.

“I was a rebellious teen in Old Bridge, New Jersey, with a literal metal militia of young metal bands,” Ferrero tells us. “Bands like Metallica, Slayer, and Venom would camp out at our friends’ houses while breaking their teeth on tour. My fandom opened up when I befriended [the Zazulas], who owned a record store called Rock 'n' Roll Heaven. We started Megaforce Records and Crazed Management in their basement. These were important times, laying the foundation of heavy metal, and I still feel I’m a part of it thirty-six years later.”

These days, Maria hangs with metal’s heavy hitters ("Last night I had the pleasure of reminiscing with fellow New Jersey native Zakk Wylde backstage at Ozzy", she tells us), but she keeps Adrenaline PR running on what she considers one of metal’s most vital resources: Jersey girls. “I have the greatest team of New Jersey women -- Natalie Camillo, Denise Santoro, and Debbie Sellnow -- with me on the front lines daily. They aim high, hit all the targets, and really nail the job for our roster. I'm a fan at heart, and I really want to make a difference for our artists.”

That’s a recurring theme among New Jersey metalheads: its sense of unity. Like all underdogs, New Jersey heshers share a scrappy togetherness that comes with living in a nexus of creativity maligned by big-city snobs. If anything, their bad rep makes them even more proud of where they’re from.

“Why do we need to be NYC-adjacent or Philly-adjacent?” says Amy Sciaretto, publicist for Atom Splitter PR. “Why can't it just be NJHC? Or NJ metal? New Jersey is and was rich enough, musically, to be its own entity, without having to be the bastard little brother of the two major cities by which we’re bookended. We don't need the endorsement from NYC or Philly. Only the strong survive the Garden State Parkway!”

“Here, it’s a labor of love,” says Anthony Gutter. “It has to be – there’s no money in it. But we have a lot of diehard kids out here – kids in bands who will play wherever you put them, and then stay for the show. I just focus on Jersey people now. I know how it is.”

Whether they’re hard rockers of brutal death metallers, promoters or publicists, New Jerseyans are fiercely loyal to their home state… and yet, there is one firm line drawn across the middle of New Jersey that will forever split the state in two.

Pork roll is a meat product similar to bologna, and is often served on a roll with cheese. Imagine a slice of a giant hot dog, and you’ve got a general idea of what you’re eating. However, when first developed in 1856 by John Taylor, the product was referred to as “Taylor Ham”. Now, the question of what to call this meat product is a bone of contention that grips the Garden State.

“Honestly, I got no dog in that fight,” says Doc Coyle. “As long as I can go to a deli and get an egg and cheese on a roll with some salt and pepper, I’m happy.”

Every month, we update our States Of Metal playlist with killer tracks from the state we're currently featuring. Scroll through to listen to music from New Jersey and all of the states we've profiled!

Misfits’ planned New Year’s Eve gig in Las Vegas has been cancelled, but the band say they “look forward to hopefully seeing you at a show in 2023”.