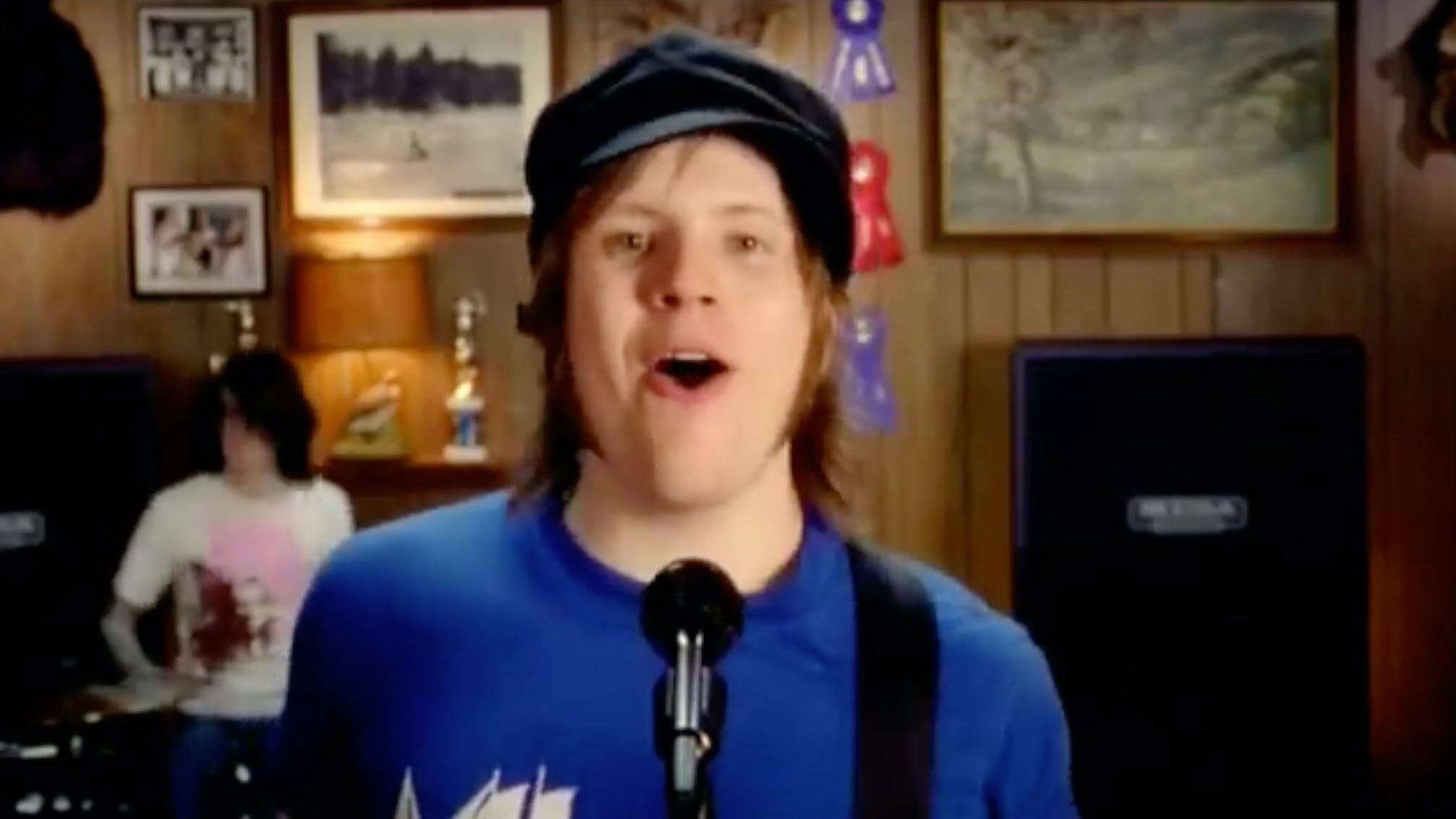 Deer deer deer. Somehow it’s been over a decade and a half since a mumbled song and a video with a half-man, half-deer propelled Fall Out Boy to global stardom and cemented emo’s status as no longer the Next Big Thing, but an Actual Big Thing. It’s just as strange to think of a time before them, the band that sold a million pairs of skinny jeans, prompted more people to grow their fringes out than maybe should have, had a gazillion MySpace friends and popularised 14-word song titles. The amount of bands that wouldn’t exist if not for them (and the Decaydance/Fueled By Ramen empire surrounding them) is staggering.

But at the time of the one-apostrophe-short Sugar, We’re Goin Down, Patrick Stump, Joe Trohman, Andy Hurley and Pete Wentz were just highly-hyped youngsters; Fall Out Boys rather than the Fall Out Men they’d become. Well, they were all in their 20s, so maybe not, but still, Patrick looks about 12 in this video.

So, without further ado, grab a hoof and let’s dive in…

0:01
Here we are in Margaretville, upstate New York, population 562. It’s not known for much other than being the hometown of Dr. Orvan Hess – inventor of the fetal heart monitor – and the location of Fall Out Boy’s Sugar, We’re Goin Down video, which is obviously what we’re goddamn here for.

0:08
Eight seconds is too long for one uninterrupted landscape shot, isn’t it? This was the second video made for the track, which is why it’s officially known as the 'Concept Version'. Initially a hurriedly-made video was put together from backstage antics and live footage while the band invited directors to submit treatments.

"In the past we had written our own treatments, but this time we decided to take someone's treatment and try it out, because it was our first jaunt on a major label," Pete told MTV. "So we were like, 'The only kind of treatment we don't want is something like, 'A guy and a girl, blah blah blah.'' But every treatment we got was like that: 'Punk-oriented people are at a pool party. One guy falls in.' And we were like, 'What?!?' We'd seen that video 80 million times."

0:12
These antlers are key to the treatment that won the band over. Director Matt Lenski’s pitch, with the now-legendary deer-boy, appealed to the band by dint of being different. "It was the one treatment that really stood out” said Pete. “It was so strange. When I read it, it reminded me of Wes Anderson, like, 'Am I supposed to laugh at this, or is this depressing?' It's a very bizarre theme and video, and I have a hard time attaching it to the song, but at the same time it was the only video where the director took a chance."

The bassist had earlier referenced Wes Anderson with the track title Tell That Mick He Just Made My List Of Things To Do Today, a line from Wes' film Rushmore, which has also been referenced by the likes of Motion City Soundtrack and My Chemical Romance.

0:14
Drummer Andy Hurley there, straight-edge anthropology enthusiast, anarcho-primitivist and a man with 'FUCK' tattooed on one set of knuckles and 'CITY' on the other – a reference to an apartment he lived in for a while, not a Bristol Rovers thing.

0:24
Singer Patrick Stump there, soul-loving former drummer, ghostwriter, producer and a man who experimented with a lot of different hats.

0:39
Patrick’s voice, with its three-octave range, is rightly celebrated as one of the best in pop-punk, but his 'eternally moving face' technique is underrated.

0:42
You can’t see because of the pixels, but that’s a middle finger.

0:50
The line ‘’Cause that’s just who I am this week' may or may not be a nod to The Simpsons episode Hungry, Hungry Homer, where Homer says, “So I gave the guy directions, even though I didn’t know the way. Because that’s the kind of guy I am this week.”

1.00
Patrick’s slurring of the words spurred Rolling Stone to dub the song “the year’s catchiest rock single and certainly its most unintelligible”. He told the magazine he deliberately slurred Pete’s lyrics to make them sound better.

1:19
Fall Out Boy echo this line a decade-odd later, in the lyrics to Save Rock And Roll: 'I will defend the faith / Going down swinging.'

1:25
It’s catchy as shit, isn’t it? It’s accordingly been sampled loads. The opening drumbeat is sampled in Girl Talk’s Smash Your Head, and the guitar riff used in 5 Seconds Of Summer’s Social Casualty. The chorus is featured in Jit/Juke by Big Sean, who has a cameo in Fall Out Boy’s Uma Thurman video. It’s also sampled at about 3:37 in Fall Out Boy’s own What A Catch, Donnie (which also features the deer’s antlers at 2:38 or so).

1:32
If you are a big fan of stories about young men with antlers, check out Jeff Lemire’s excellent Vertigo comic series Sweet Tooth.

3:00
Drummers get fewer opportunities for acting out than other band members, particularly in a band like Fall Out Boy where Pete and Joe are almost constantly pirouetting and leaping, so massive kudos to Andy for a drumstick 'cock it and pull it' mime.

3:10
'Number one with a bullet' as an expression pre-dates its use in this song, but has musical origins. Billboard’s charts would feature a small image of a bullet next to a song that was doing particularly well. Despite being a massive hit, the song peaked at Number Eight on the Billboard Top 100 – it was in the charts for 42 weeks.

3:38
Andy told Rolling Stone that when Patrick finished recording his vocal track he turned to the drummer extremely confidently: “He was like, ‘Yeah, I just got your kid’s college tuition paid for.'”

3:42
It’s a happy ending! The old man survived being hit by the car and has accepted both his own part-deer identity and his daughter’s part-deer boyfriend, and holy shit, thinking about it, what a weird fucking video. It’s great, and iconic, and justifiably massive, but honestly, what the hell, right?