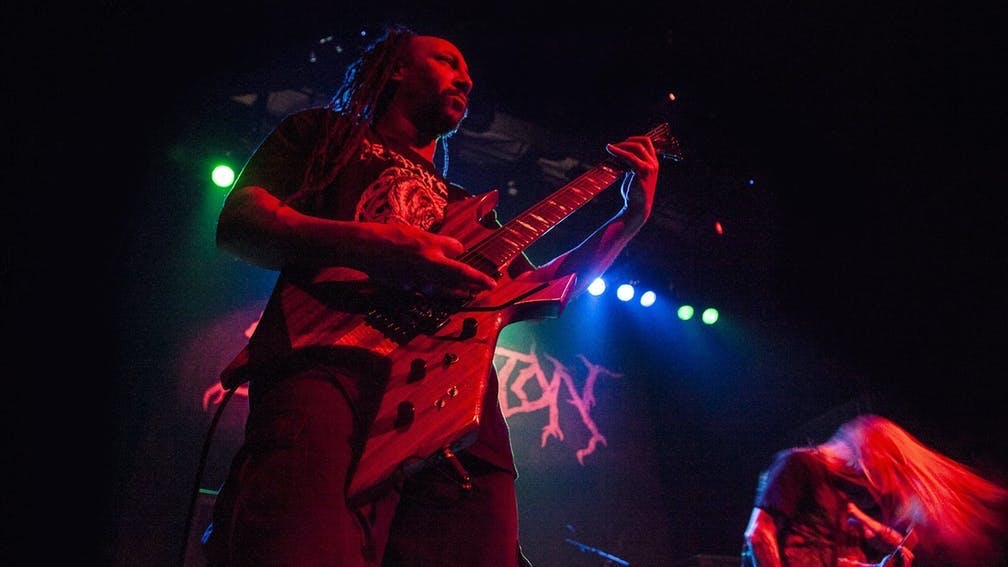 Creating a top-10 list of metal songs by boisterous white dudes is effortless; the only potential difficulty in it is that there are too many options. Even choosing metal songs featuring female musicians would be less of an arduous task.

Yet, black metal musicians are most certainly out there. Somewhere at the intersection of personal taste and personal identity, they’re headbanging and shredding with the same spirited gusto as any white metal musician. In doing so, they’re going against the stereotypical grain and affirming their place and more-than-deserved positions in a music realm that frequently mirrors the biases, discrimination, and exclusion of the real world.

But Martin Luther King, Jr. didn’t fight for that. He didn’t intend for progress to start and end with his own efforts. So while it’s always important to pay attention to and support black everything, it’s even more crucial to recognize the struggle — and have a hand in dismantling it.

Navigating the fairly myopic world of metal as an African-American is alienating and discouraging at times, but being the devoted metalheads we are, our spirits will never be broken, and our fight for a permanent seat at the metaphorical metal table will never end. In honor of Dr. Martin Luther King Jr. himself on his day of remembrance, here are the 10 best metal songs featuring black musicians. As you read on, think less about the order they’re in and more about why there’s a list to begin with.

Suffocation’s lead guitarist Terrance Hobbs is the man. His riffs are swift and complex, helping create a solid base for the brutality the New York-based death metal band has constructed in their music since 1988. They’re definitely raw, and the downtuned notes he yields in his playing paired well with former lead singer Frank Mullen. This song is just one example of his mastery.

Taking into consideration the contextual role that location plays in exposure and creation of music, Demogoroth Satanum are like a devilish godsend: The corpsepaint-sporting band hail from Soweto, South Africa – a place still socially torn by the segregation remaining from the days of Apartheid. But they’ve got one goal in mind: expose as many South Africans to the harsh sounds of black metal as possible. This track off their first album, released in 2012, is a lo-fi and trad way of doing so.

Brooklyn’s Candiria created a legacy all of their own, blending elements of hardcore, jazz, prog-metal, and hip-hop to create what they eventually dubbed “urban fusion.” Their albums (and, at times, their individual songs as well) veer in many different categorical lanes, switching it up at the drop of a hat… or beat. Cleansing has got a little bit of that with a short and poetic rap verse just before the one-minute mark, transitioning into chug-heavy greatness.

Tosin Abasi is an expert guitar player. When his instrumental prog metal band Animals as Leaders released their debut in the late 2000s, they shook the metal world considerably with their well-crafted djent. Their technical playing makes it easy to see how talented they are, with Tosin leading their polished pack.

6. Witch Mountain – Burn You Down

Portland, Oregon’s Witch Mountain have been around for two decades, so Kayla Dixon had some pretty big shoes to fill when she joined the band in 2015. And she did it with ease. A voice both beautifully soulful and capable of screaming an earthquake into action, Kayla carries that power just as fluidly to her onstage persona. She’s intense, scarily sensual, and an overall great addition to the band.

Blending thrash with melodic death metal, God Forbid hit the scene when bands like GWAR and Cradle of Filth were in their heyday, and their new sense of heavy metal had a lasting impact. The title track off their first full-length album Reject the Sickness is a two-stepper’s dream and frontman Byron Davis certainly screams his way through it. While it’s too bad the band broke up in 2013, it’s exciting that guitarist Doc Coyle (biracial himself) is carrying the metal torch in his new successful band, Bad Wolves.

Katon W. De Pena is devoted to his craft. He’s the only original member left keeping Hirax going strong, and is just as much a powerhouse today as he was when he first introduced Hirax back in 1984. He continues to stay active and supportive of the thrash-metal community outside of just playing music, while never forgetting his cultural roots. Though he questions (as do the rest of us) why there aren’t enough black people in metal, at least we know he’s not going anywhere anytime soon.

Though the Jesse Leach era (formerly and currently) of Killswitch Engage is great, there’s something about the Howard Jones years and the intensity he brought to the band that hold a special place in metal history. From the album The End of Heartache, Jones’ first album as lead vocalist, the drumline and impending riff on opening track A Bid Farewell merely accentuate the shrillness about to come out of Jones’ mouth. His display of this vocal range, switching between gruff screams to melodic belting, is unmatched. The man can sing.

Going down as the first all African-American heavy metal band, Black Death came out of Cleveland with hair as big and spandex as tight as their contemporaries. They were lively and riotous in all of their thrash and power-metal splendor, but this track, coming off their 1984 self-titled debut, shows a bit vocal dimension by frontman Siki Spacek. Plus, that stage name is too good not to applaud.

Ice-T has been with the realness from the start. Despite playing a cop on a television show, the points he made with the rest of Body Count in Cop Killer are just as if not more relevant in modern times than they were when their debut album hit in 1992. He’s been able to communicate the tribulations of the black experience vividly as a rapper and in Body Count, but Cop Killer is simply timeless.