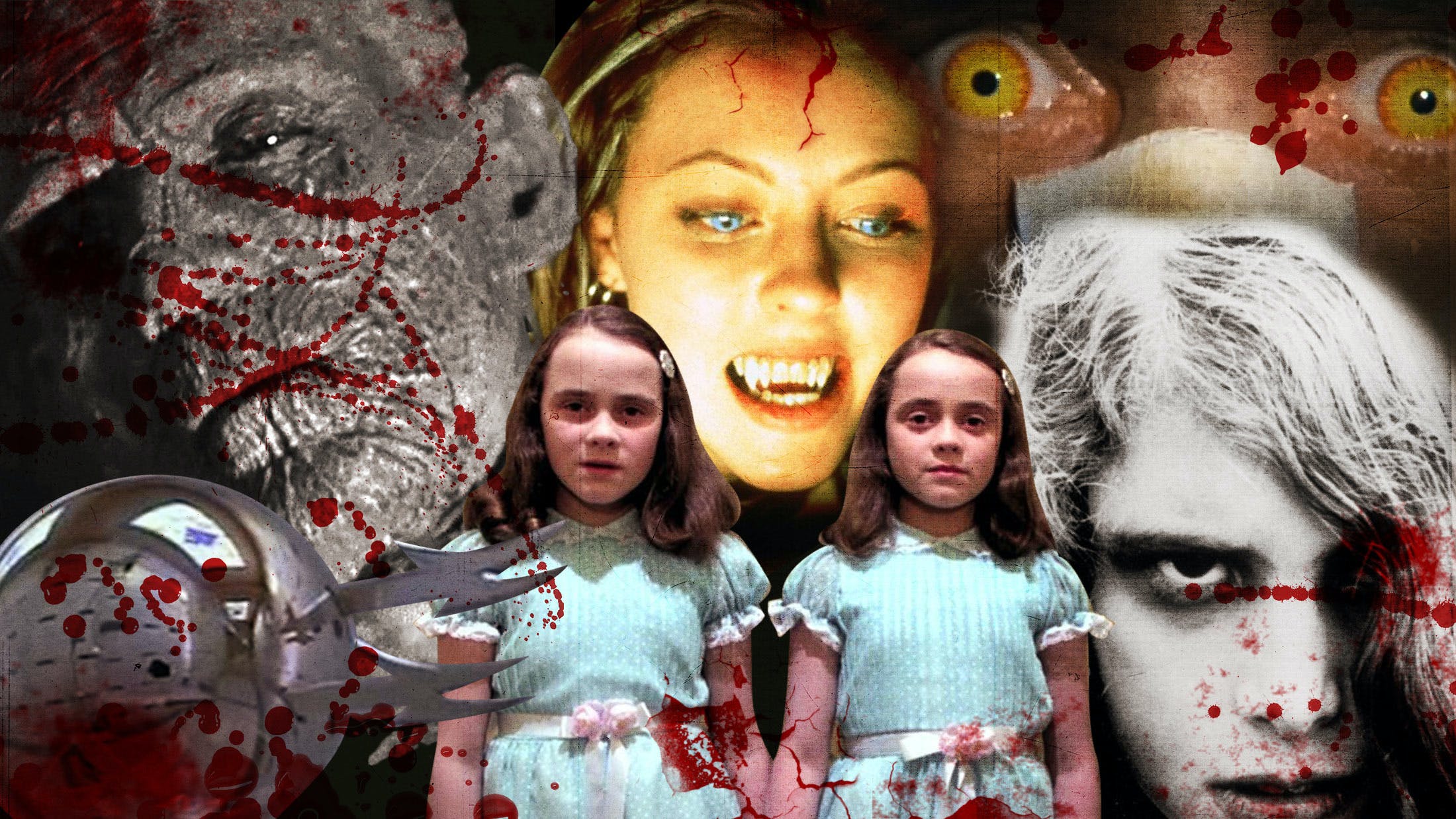 Heavy metal and horror movies have always been happy bedfellows. Hell, the band that started it all took their murky vibe and unforgettable name from 1963 Mario Bava/Boris Karloff anthology feature Black Sabbath. Since then, everyone from Iron Maiden (The Number Of The Beast, Children Of The Damned, The Wicker Man) to Ice Nine Kills (er, the entire Silver Scream LP) have found untold depths of inspiration amongst the scream queens and splatter of dark genre cinema.

There’s always a little extra bite, of course, when artists borrow directly from the features that inspire them. There’s nothing like a Wilhelm Scream to raise the heckles, or some uncannily spooky sound effects your subconscious links back to the creature features that haunt your dreams. Here, we’ve run down the best of the lot, based on memorability, atmospheric fit and sheer shit-stirring impact. Only direct samples from the film soundtrack qualify, so blunt homages and shameless rip-offs are excluded.

Read this: 13 kickass horror soundtracks to amplify your Halloween

A warning: severe cases of the goosebumps may accompany the songs that follow…

We’ll start with one of the most iconic yet underrated. Raising curtain on the seminal second LP from Canadian tech-death metallers Cryptopsy, Crown Of Horns opens with a lift from William Peter Blatty’s (equally underrated) sequel to The Exorcist. We get the guttural, demonic roar as Brad Douriff’s Gemini Killer transfigures into Jason Miller’s Damien Karras mid-interrogation with George C. Scott’s Lieutenant Kinderman, before smirking, "I do that rather well, don't you think…" Spiralling off into a sea of blastbeats, tortured vocals and tangled riffage, it’s a brilliantly insidious fit. As an added bonus, album closer Orgiastic Disembowelment closes out with a cheeky lift from Evil Dead threequel Army Of Darkness, too.

Swedish death'n'roll icons Entombed were never shy of chucking in a good sample or two. One of the sludgier cuts from their 1991 masterpiece Clandestine, however, Sinners Bleed might just feature their most inspired. After a solid three minutes of bludgeon, a voice low in the mix almost groans, "Death… Eternal punishment…" Just a segment of the “terrible curse” on the titular Amon-Ra’s tomb, it’s a nice nod to Karl Freund’s 1932 classic The Mummy. Where the black and white Universal classic is a distinctly PG affair, however, the quote’s placement alongside nightmarishly purgatorial lyrics like, 'I am scattered in my own blood / I am losing all my beliefs / But I was not just going to be dying / I am bleeding like sinners bleed…' gives it all a far darker feel…

Frequently drawing aesthetic influence from midnight movies and projecting genre-flicks over the top of their live show, Dorset doomsters Electric Wizard were almost guaranteed to turn up on this list at some point. Cropping up on the opening track to their second album Come My Fanatics…, this inspired cut from Umberto Lenzi’s obscure exploitation film Cannibal Ferox (AKA: Make Them Die Slowly, AAKA: Woman From Deep River) – a furious 'Get off my face, motherfucker' – feels like a gleefully tongue-in-cheek nod. Those in the know will get the joke…

Stockholm death-doomsters Katatonia were at their dark, melancholic best on 1996 masterpiece Brave Murder Day. A strange, progressive, largely ambient into to the album-closer pivots with the quote from Jack Nicholson’s Jack Torrance as he interviews for the winter caretaker’s job at The Overlook Hotel: "Because, for some people solitude and isolation can, of itself, become a problem. Not for me." From there, we burst into a soundscape of jagged grandeur that – fittingly – feels better matched to Stanley Kubrick’s heralded cinematic adaptation than the haunting Stephen King novel on which it was based.

In fairness, we could’ve probably put together this list pretty respectably with reference only to the assorted works of White Zombie and its constituent members. Having limited ourselves to one cut from each artist, however, this is our favoured pick of an excellent bunch. Scrolling through the static of the airwaves, this interstitial track eventually settles on the infamous news report from George A. Romero’s zombie masterpiece Night Of The Living Dead: "These are the facts as we know them. There is an epidemic of mass murders being committed by a virtual army of unidentified assassins." It’s best experienced followed-up by the cracking Thunder Kiss ’65 into which it segues on 1992’s Le Sexorcisto: devil Music Volume 1.

Perhaps the greatest exponents of soundtrack-sampling in all of rock and metal, you couldn’t do a list like this without Ministry in mind. We could’ve picked lifts from Hellbound: Hellraiser II (Cannibal Song), Blue Velvet (Jesus Built My Hotrod), Altered States, Suspiria or The Pit And The Pendulum (all Psalm 69) here, but there’s something deliciously twisted about the passage taken from this envelope-pushing, Ken Russell-directed, Oliver Reed/Vanessa Redgrave-starring 1972 deconstruction of the myth of witchcraft, Catholicism and repressed sexuality. "You have been found guilty of covenants with the devil," accuses the inquisition. "State your confession!" "Confess! Confess!" "The Anti-Christ!" "Confess! Confess!" All the while a treacle-thick industrial groove unspools in the background. Darkly delicious.

7. Perturbator, Humans Are Such Easy Prey [Dangerous Days] – The Terminator (1984)

Okay nerds, The Terminator might not be a horror movie in the narrower sense, but the tale of an unstoppable killing machine stalking Sarah Connor across 1980s LA owes more to man-in-a-mask stalk'n'slash classics like Halloween and Friday The 13th than many give it credit for. Also, this marriage of sample and song is far too good to be ignored. "It can’t be bargained with,” seethes Kyle Reese’s iconic monologue. “It can’t be reasoned with. It doesn’t feel pity, or remorse, or fear. And it absolutely will not stop, ever, until you are dead.” The synthwave explosion that follows – doled out by Parisian scene-leader Perturbator – is fittingly overloaded with tech-noir atmospherics and metallic dread.

New York deathgrind bad boys Mortician are another outfit with no shortage of horrific samples. It’s impossible not to be bowled over by the audacity and sheer fanboy bloodthirst of this one, though. "Hey 'ole buddy! What are you doing out here tonight…” begins the rambling chit-chat from one unwitting victim-to-be that runs for over half this track’s two-minute duration before the titular madman puts his, er, DIY skills to work. The remaining 51 seconds are, predictably, a masterclass in unapologetically gut-wrenching brutality. Abel Ferrara’s 1971 pitch-black horror comedy – from which the sample was lifted – infamously found its way onto the 1980s ‘video nasties’ blacklist. Although that hysteria has long since faded, this track captures the sense of grotty danger that hung over the film at the time…

"Listen to them. Children of the night, what music they make…" One of the great quotes, not just in horror cinema but all of dark fiction, it’s a little surprising that Count Dracula’s salute to the howling wolves of the Carpathian mountainsides hasn’t made it into metal more often. We can’t really think of a better sonic sample than Gary Oldman’s Count from the Francis Ford Coppola-directed Bram Stoker’s Dracula, either. Pennsylvanian metalcore heroes Motionless In White capture neither the gleefully campy excesses – nor the absurd accents – of the source material, but their song’s no-holds-barred attack comes with plenty of serrated guitar-work and vocal bite – not to mention bonus lyrical nods ('Cry little sister…') to Gerard McMann’s seminal Lost Boys soundtrack. Well-versed bloodsuckers would approve.

It doesn’t get much darker than this. Niklas Kvarforth’s ‘depressive suicidal black metallers’ (yep, this is the horrible Swedish Shining, not the fun-loving, Sax-infused Norwegian one) have often pushed the boundaries of good taste with lyrical themes, imagery and personal behaviour. Their decision to lift from John Fawcett’s absolutely outstanding 2000 werewolf flick Ginger Snaps is a stroke of black-comical genius, however. "Wrists are for girls,” the titular Ginger broods to sister Brigette. “I'm slitting my throat. You should definitively hang.” A snapshot of moody, gothic adolescents idly toying with extremely serious themes, it’s unclear whether Shining were purposefully or inadvertently skewering themselves here, but this unforgettable cut (translated as ‘Something Is Very Wrong) stands out regardless. Brilliantly, the song itself is every bit as melodramatically OTT…

It’s unclear what Don Coscarelli’s absolutely bonkers 1979 science fantasy horror Phantasm – about a monstrous alien undertaker who turns the earth’s dead into dwarf zombies to be sent back as slaves to his home planet – has to do with being Guilty Of Being Tight. Or, indeed, with Guilty Of Being White – the Minor Threat classic to which Municipal Waste were paying tribute here. Perhaps that’s just in keeping with the wide-eyed stoner sensibilities of both movie and song, though. "Okay,” rambles the flick’s goofy best-friend Reggie. “I see it, I see it all now. What we gotta’ do is we gotta’ snag that tall dude and stomp the sh*t out of him, and we'll find out what the hell is going on up there. Yeah! We lay that sucker out flat and drive a stake right through his Goddamn heart!" Quite…

Given he spends more time these days making horror movies than music, it’s only right that Mr. Zombie is allowed a second shout on here for his solo exploits. We’re still cheating a little here, though. The iconic quote: "Who is this irresistible creature who has an insatiable love for the dead?" isn’t actually from 1971’s Italian classic Lady Frankenstein itself, but rather from the movie’s gloriously overwrought trailer. As a snapshot of the sex, violence and sheer OTT of the golden age of Italian horror, it fits the bill perfectly though. And in terms of iconic horror imagery in metal, it’s rarely been surpassed.

“I am Matthew Hopkins, witchfinder…” It’s an iconic line, delivered by horror icon Vincent Price in one of his most iconic roles as real-life English witch-hunter Matthew Hopkins, who terrorised the accused “witches” of East Anglia through the middle of the 17th century. Opening – then filtered again throughout – this trademark tune from Coventry doomsters Cathedral, Matthew’s exploits underpin many of the themes and images central to brilliant third album The Carnival Bizarre. 'She rides to the Sabbath, veiled under silver light,' croons frontman Lee Dorian, inhabiting the character with maximum ham and minimal judgement of Matthew’s misdeeds as some insane riffage hammers away, 'to make love to the devil necromancer of nyte…' Just like the film, it’s a lurid delight…

“We want to give fans something to headbang to,” says Chris Motionless of MIW's new single, Timebomb.