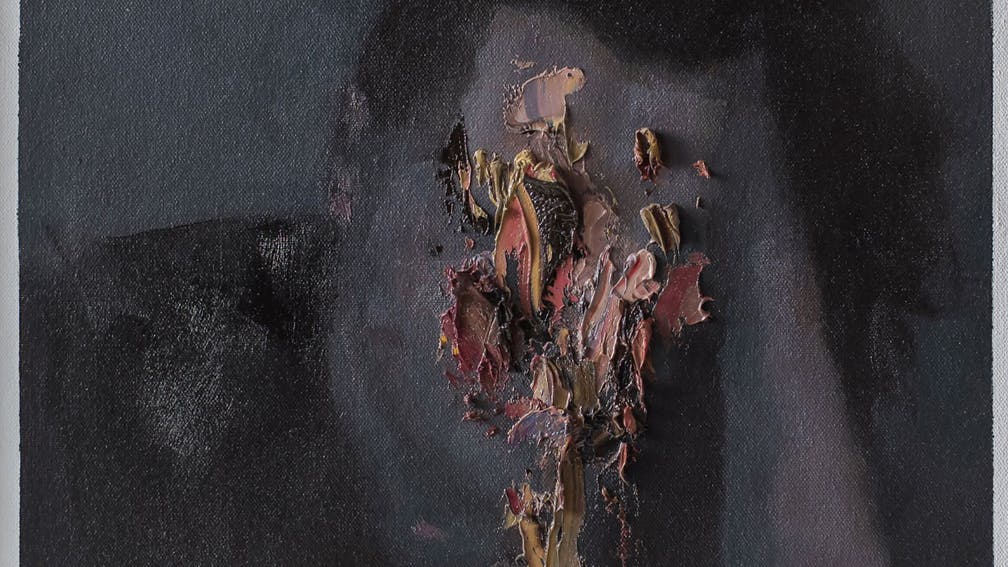 Conjurer are far too level-headed to pay much heed to hyperbolic claims that they’re the saviours of British metal. They are, though, gradually coming round – in a disbelieving sort of way – to the fact that they’ve now become a pretty big deal. “I’m still pinching myself,” co-guitarist/vocalist Dan Nightingale told us recently. “We have no image, we have no backstory, we have no sort of cult following or anything like that. We’re just four random, incredibly boring people who like to play metal and, somehow, that’s gotten us here.”

‘Here’ in this context is a place where their debut album Mire received almost universal acclaim. Where a hell of a lot of people are actually waiting for the follow-up with a genuine sense of anticipation. The pressure might seem to be on but Conjurer triumph without playing to the galleries.

Páthos does not simply repeat the sludge-dipped slugfest of Mire, although it does retain the sheer heft in places. Witness the sledgehammer riffs that prop up opener It Dwells, or the progression of Rot – a song that starts with the eerie ambience of The Red Weed from Jeff Wayne’s War Of The Worlds and culminates with a breakdown that sounds like the supermassive black hole at the centre of everything. They’ve never been about heaviness alone, though (despite fellow guitarist/singer Brady Deeprose’s recent claim that Mire was “just big, dumb idiot riffs”) and Páthos explores and expands on the density at the core with a much broader range of textures and emotions.

The 2019 Pijn and Conjurer collaboration for the Curse These Metal Hands EP sort of signposted a way for Conjurer to combine their crushing wall of sludge with more expansive post-metal layers. Where that one-off was a fun and relatively straightforward amalgam of the two bands’ approaches though, this is a far more desolate journey. There are certainly no Peep Show or Futurama references here and, with a literal translation from Greek meaning variously ‘suffering’, ‘experience’, or ‘emotion’, Páthos is the perfect title.

Lyrically it digs deeper and far more personally than the debut. All You Will Remember is Dan’s reflection on witnessing his late grandmother’s decade-long battle with dementia. The music is as sombre as the subject matter and also features a haunting spoken-word passage from singer, violinist and composer Alice Zawadzki. ‘Thoughts come to me like whispers and vanish just the same / Faces I have known and loved, replaced by masks of shame,’ she intones through the emotional ebb and flow.

Elsewhere, Suffer Alone channels its bleak sentiment through a sub-three-minute blast of furious hardcore grind that will cause chaos in the pits, while epic closer Cracks In The Pyre takes more than twice as long in a slow wash of carefully crafted noise as it meditates on death and loss.

It might not be a barrel of laughs, but Páthos is certainly a cause for celebration. Having released one of the finest debut albums of recent years, Conjurer have finally followed it up with a set that expands and in some ways improves on that blueprint. They might not be the saviours of anything, but they’re certainly one of the finest metal bands out there right now.

For fans of: Pallbearer, Mastodon, Oathbreaker

Páthos is released on July 1 via Nuclear Blast

Read this: Conjurer: “Already, this band has come further than any of us thought was possible…”