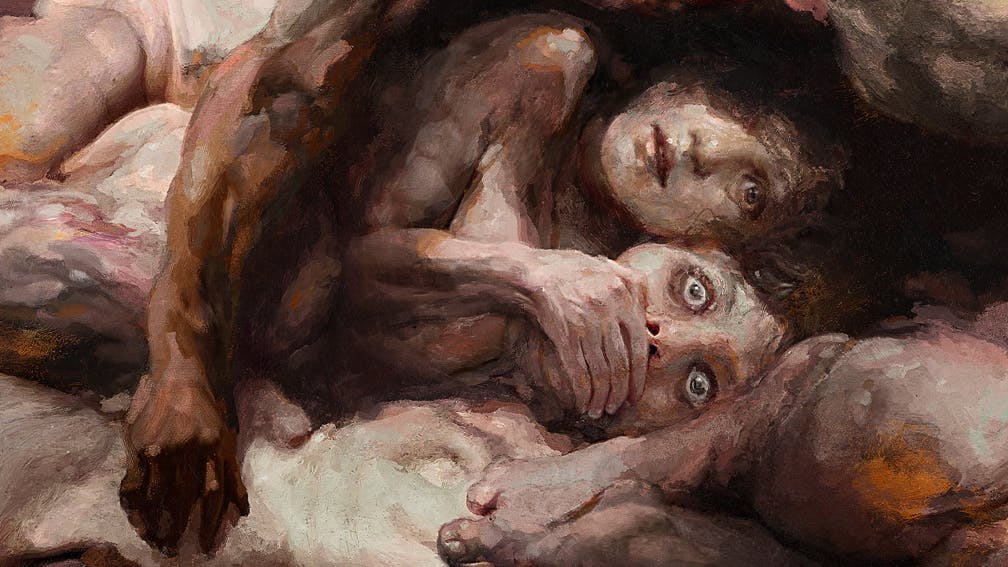 Rarely has an album been so aptly named. In Greek mythology Erebos was a dark primordial deity born of pure chaos. Venom Prison’s new record was forged in the most tumultuous of times, and the Welsh band have spent their brief career to date forging order from chaotic noise. On first listen, the sheer blistering aggression is still the most prominent element, but as Erebos unfolds the subtleties, structures and sheer poetry of the songwriting spill from the darkness like veins of cold luminescence.

That poetic bent is one of the several factors to have set Venom Prison apart from their contemporaries in the six years since their debut full-length Animus roared into life. Singer Larissa Stupar’s lyrics remain staunchly political and grounded in all too real horrors, but there’s a use of metaphor and imagery that elevates the themes above the prosaic. Once more boasting stunning artwork from the renowned Eliran Kantor (who has also created album covers for the likes of Testament, Hatebreed and My Dying Bride), Erebos presents a grand aesthetic sweep to go with its musical ambition. Many of the song titles suggest a concept album built around mythical tales but they’re cleverly wrapped around those very real issues. So, Golden Apples Of The Hesperides mixes classical symbolism with social media manipulation while Gorgon Sisters deals not with snake-haired monsters but the forced sterilisation of immigrants. Be aware if you’re just looking for something to slam to: cheery and lightweight this isn’t.

While Erebos was gestated through a pandemic, it certainly isn’t a blatant lockdown album. It does, though, circle around themes of isolation. Judges Of The Underworld and Castigated In Steel And Concrete both shine a light on dark elements of sentencing and prison systems. Comfort Of Complicity explores immigration policies that tear families apart, while Pain Of Oizys sees Larissa examining her own depression and PTSD. The figure of Oizys is a goddess of misery and grief, but there’s a certain streak of optimism, or at least defiant acceptance, to the song as the singer intones, ‘Bow to no-one – off your knees / I find peace in the roughest seas.’

That song also sees the band making their biggest musical departure, as they back the reflective lyrics with sparse atmospherics, reverb-drenched picked guitar and sonorous piano. There’s still an aggressive edge, but there’s an ebb and flow to the song, and Larissa also stuns with a display of clean vocals – her first full foray into that area. It might have reduced her to tears and taken 10 hours in the vocal recording booth to capture it but the emotional pay-off is more than worth it.

Elsewhere, the music on Erebos will be familiar to existing fans but with more refinements and flashes of invention threaded into and through the brutality. After the short cinematic intro of Born From Chaos, opener proper Judges Of The Underworld explodes in a welter of rhythmic pulses, incorporating both clean guitar melodies and fearsomely heavy hardcore-style breakdowns into its frequently gear-changing whole. Nemesis repeats its raw, bloodied hook – ‘I am the damaged one / You deserve all damage done’ like a mantra, in amongst the technical runs and riffs. Comfort Of Complicity brings in some deft prog-metal touches while Castigated In Steel And Concrete layers some ethereal guitars over jagged metallic aggression.

As Technologies Of Death closes proceedings with a vicious pummelling of capital punishment, it’s the end of an exhausting but utterly exhilarating ride. It’s still early but it’s an incredibly safe bet that one of the best metal albums of the year is already here.

For fans of: Employed To Serve, Blood Incantation, Gatecreeper

Erebos is released on February 4 via Century Media