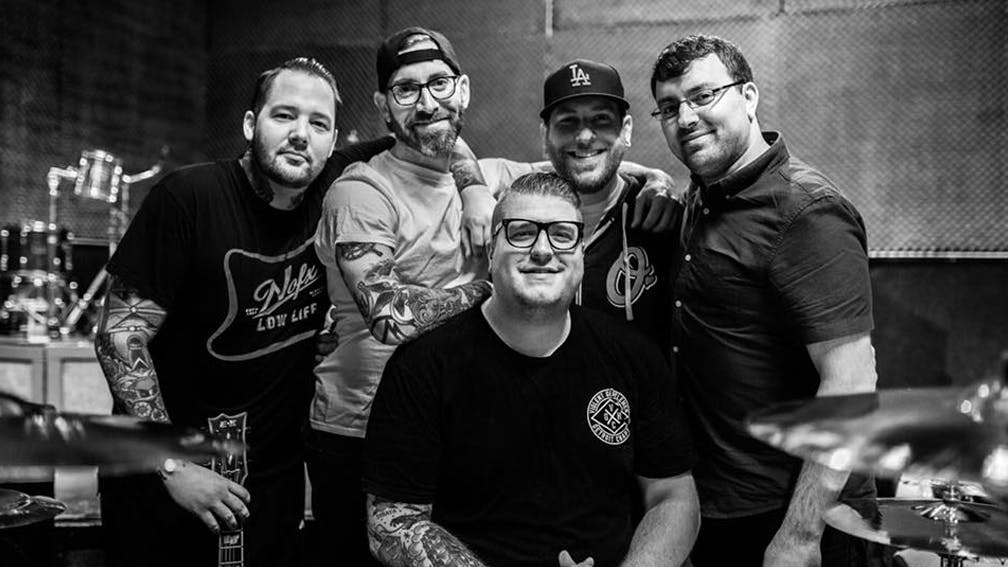 The last time Los Angeles metalcore heroes The Ghost Inside graced UK shores, the band were playing second-from-top on the third stage at Download Festival 2015. They were relatively early into their campaign for then-new album Dear Youth, and the future was looking brighter than ever.

Five months later, everything changed. The band were involved in a shocking road collision while in their tour bus on November 19, 2015, with the drivers of both vehicles losing their lives, and the remaining passengers suffering a number of terrible – and, in some cases, near-fatal – injuries.

The story of this event has, of course, been widely reported on in the days, weeks and months since, with each member – vocalist Jonathan Vigil, bassist Jim Riley, drummer Andrew Tkaczyk and guitarists Zach Johnson and Chris Davis – documenting their recovery process openly. But it’s worth reiterating just how far they’ve come since that life-shattering event, because the band have just announced a very special UK comeback show – something that many didn’t even think was possible, The Ghost Inside included.

For one night only, the band will perform at London’s O2 Academy Brixton on July 4, following their European return at Germany’s Full Force on June 27. Given the long-term effect of their 2015 accident, touring full-time is no longer an option for The Ghost Inside, meaning their focus is now on specific one-off events such as these. Jim tells us more…

First up, Jim, how excited are you about returning to the UK next year?
“Over the moon! The support from our UK fans after the accident was some of the biggest we saw, and we knew if there were more shows then getting back over had to be a top priority.”

You’re headlining London’s O2 Academy Brixton for the very first time, which is a pretty legendary venue. How do you feel about playing there?
“Brixton has so much history for rock music, but in particular for bands like us. We’ve watched lots of our friends do amazing headlining shows there – Architects, Parkway Drive, Bring Me The Horizon, and so many more – that launched them to heights that seemed impossible for bands that do a lot of yelling. I can’t wait to see our name up there on the marquee.”

The last time you played the UK was 2015’s Download. What do you remember about that show?
“I remember playing pretty late on Sunday after what had been an exceptionally muddy weekend – even by Download standards. We were onstage and the crowd was going absolutely nuts and I was thinking, ‘How do they still have so much energy? I would’ve ditched my tent and gone home Friday night.’ I also remember the line-up that year had tons of classic rock on it, and my family finally recognising the names of some of the bands we were playing with…”

The logistics of playing live now will be so different. What have those talks in making these shows a reality been like?
“It takes months for us to aim for a show right now. Getting the fitness together to perform for 60 or 90 minutes doesn’t happen overnight, and it’s even harder when your body takes twice as long to recover from a workout. The summer will be our first attempt at putting a couple of shows together, and it’s something we know we have to really prepare for.”

The production for The Ghost Inside’s LA comeback gig at The Shrine in July looked like it was pretty all-out. Are you planning a similarly impressive set-up for Brixton?
“I think the only way to possibly answer this question is the smirking face emoji…”

Interesting. How soon after that gig did you personally realise that you wanted to try and play more shows?
“To be perfectly honest, I think we started to realise it that week while we were rehearsing. It was a lot of work physically and emotionally just to get to that point, and it became obvious as practice got better and better that we are a bit more capable of playing than we thought. It was one of those things where we just couldn’t commit to anything in the future until we had gotten on that stage to see how it would feel.”

What was the case for the rest of the band – was anyone hesitant, or did you all instantly know you wanted to play more, too?
“Vigil was the most conscious of not promising anything more than we were ready for. The future felt far away for a long time, and it came up on us really quickly. We got an offer for the UNIFY Festival in Australia that needed a response, and that forced us to have the conversation. It was a very quick ‘yes’ from all five of us.”

Was it always on your minds to try to return to Europe as well?
“As soon as we confirmed the trip to Australia, the very next sentence was, ‘Where else should we go?’ Everyone knew the answer was Europe. We wanted to bring the feeling of that Shrine show over to the fans who have had our backs since day one.”

As well as London, you’re playing Full Force Festival in Germany, which is your only mainland European gig of 2020. What makes Germany in particular so special to The Ghost Inside?
“Germany has just gotten TGI all along from our very first time over on the Never Say Die! Tour. They understand the punk and hardcore mentality, and that you don’t have to sound a certain way to try to embody that. Germany was the first country to come out for us in ‘Holy shit!’ numbers.”

You had fans travelling from all over the world to see The Shrine gig. How important is it to you to try and return the favour and visit countries like England and Germany?
“Seeing the response of fans worldwide was nothing short of overwhelming. We followed quite a few of stories of people travelling from overseas. Seeing people willing to make that commitment of time and money to hang out with us seemed insane. We knew if we did more shows, we had to go to them.”

The Ghost Inside have always been regarded as one of the best live bands in the scene. Was there any pressure there to live up to those heights at the show?
“Have we? That’s a huge compliment! We always took pride in putting it all on the stage. There was of course a bit of nerves that we wouldn’t be able to get back to that level, but once we were on the stage most of it just came naturally. We went into it focused on sharing a night with family, friends, and fans, but came out of it feeling like we had pulled off something really special.”

It was obviously an incredibly emotional occasion. Next year’s shows are likely going to be similar – especially for the fans who weren’t able to travel to LA. How are you going to mentally gear up for that aspect of the show?
“The biggest difference is that we won’t be afraid. There was definitely a fear that we’d get up there and suck and embarrass ourselves, and now we know at the very least we can still do the job. At the same time, we know for almost everyone at these shows it will be their first time seeing TGI since the stuff happened, and we want to give them the show and the experience that they’ve been dreaming about for five years.”

You gave Dear Youth songs Phoenix Flame and The Other Half live debuts. How did that feel, compared to material that you’ve played hundreds of times?
“We love those songs, and they were about to make their way into the live set while we were touring on Dear Youth, so it was awesome to finally debut them live. It was definitely intimidating to play them at our first show in four years. With the older songs it went straight to muscle memory and we had to figure out what to do on a stage with those two. It seems easy, but it’s like learning a new dance in front of a few thousand people.”

You told Kerrang! that there was “a feeling of rebirth” ahead of the LA gig, just getting back into rehearsal and that environment. Now several months down the line, what’s the feeling like?
“We have spent most of the time since the show on and off in the studio, which has really been a continuation of that feeling. It feels like we are a band again – talking about all the normal stuff. ‘What are the ideas for merch?’ ‘Do you like these lyrics?’ ‘Where should we eat lunch?’ ‘Does anyone have extra Q-tips?’ Seriously, it sounds cliché but we really think that show is the beginning of a new chapter and not the end of the story. That seemed impossible a couple years ago.”

Will fans be hearing new music by the time these European shows arrive?
“Yes…”

You’d been working on music in the studio before the LA show, and then again afterwards. Was there any difference between the two sessions?
“The biggest difference is the emphasis on collaboration. This is the first record without [former lead guitarist and co-founder] Aaron Brooks, and first with Chris Davis. Aaron was the main guy to put the ideas together before, and we’re doing it much more as a group on this one. There’s also a freedom now to explore the TGI sound in any way we want. We are so far removed – almost six years – from the Dear Youth process, and the band has grown so much as individuals and as a collective that we bring a lot of new things to the table.”

You worked with famed metal and hardcore producer Will Putney, as well as A Day To Remember’s Jeremy McKinnon, on the music. Was it always going to be the case that you wanted to go with those guys in particular?
“Will was our first choice producer for this project, and we always wanted to have Jeremy involved as well. We are very lucky that we don’t have a deadline and have been able to work around their schedules. [The Ghost Inside’s record label] Epitaph have been incredibly supportive on this as well, understanding that making the record was going to be a little non-traditional, but if the results are as good as we are hoping it will all have been worth it.”

The Ghost Inside play a one-night-only show at London's O2 Academy Brixton on July 4, 2020. Get your tickets here.